Just under a three hours drive north west of Lourmarin lies the Aveyron region of southern France. A place of mystical fairy-tale châteaux, (we were fortunate enough to stay in one), medieval villages, gothic cathedrals, and a past where swash buckling knights fought to protect their land. A rich, verdant landscape where sheep and cattle graze happily just below the Massif Central. A region suddenly more accessible in the 21st century by the completion of the breathtaking Millau Viaduct.

The Millau Viaduct, an incredible feat of engineering, spanning the Tarn Valley, it is the tallest viaduct and bridge in the world, forming part of the A75 from Paris to Béziers and Montpellier. It was designed by British architect Sir Norman Foster and French engineer, Michel Virlogeux  and was built by Eiffage. After 14 years of preparation, it took just three years to build and opened in 2004 at cost of 400 million euros. 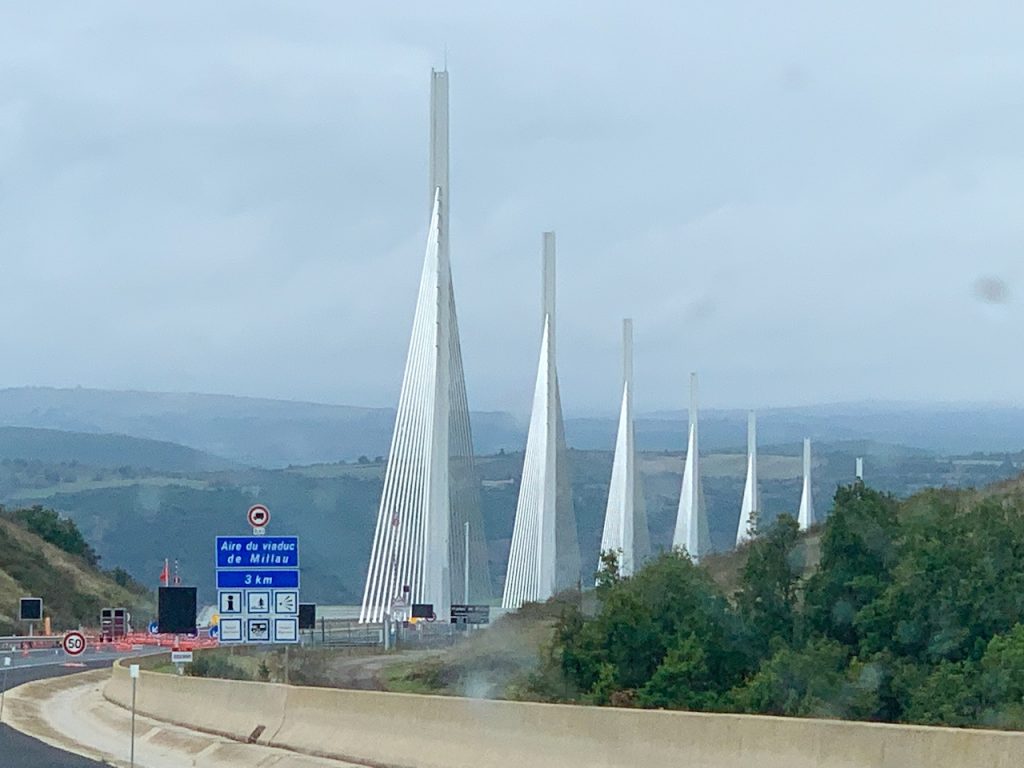 Award winning and internationally acclaimed, the viaduct is often referred to as ‘the structure which broke all records’. It is 2460 meters long and spans 242 meters, the Eiffel Tower could fit sideways between its two piers. Its steel deck weighs 36000 tonnes, the equivalent of 5100 African elephants. Its pylons are 87m high, equivalent to a 29-storey building and as the world’s tallest bridge it rises 343 meters into the clouds, 19 meters taller than the Eiffel Tower. 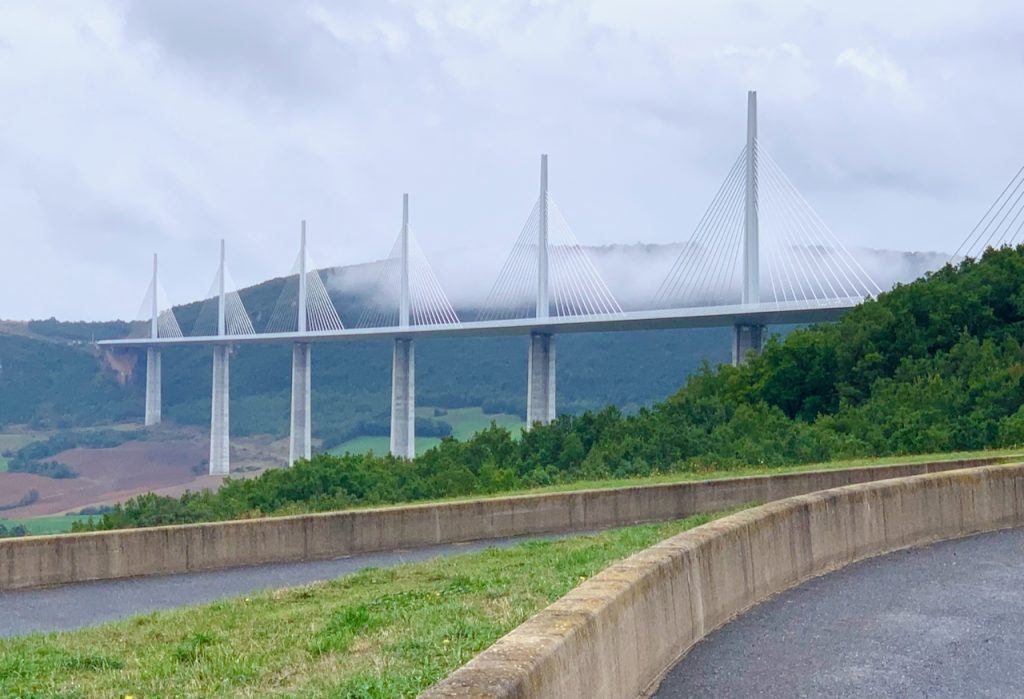 Hidden down a quiet, leafy lane an hour away, near the cathedral city of Rodez, we found our way to the 16th century Château de Labro. Our ‘home’ for a few nights whilst we explored this intriguing corner of France.

Our bedroom was in the original part of the old château, our bathroom in the turret.

A spiral, ‘Rapunzel’ staircase led up to our room,

through the château’s Games Room,

into our sumptuously decorated bedroom.

The turret bathroom was perhaps a little different to navigate, with its hand-held shower over the toilet, becoming a true wet room once used!

Boasting a rich history of plots and intrigue, sadly the château became neglected. But, in 2002, Jean and Nizou Rouquet fell under its spell and embarked on an extensive restoration to bring it back to life.

Some of the bedrooms are in the lovely adjoining building, by the Spa and other receptions room.

Great care has been taken to create an authentic but luxurious place to stay. The exterior details are a subtle but charming nod to the past.

A clever blending of old and new,

with reminders of the château’s rural setting.

The château is now run by the Rouquet’ son, Michel, who hopes its visitors will be able to relax, surrounded by the serenity of the château and its carefully chosen furnishings and fixtures and the beauty of the surrounding Aveyron countryside.

The Aveyron is home to several ‘Plus Beaux Villages de France’. Sauveterre de Rouergue was the first one we visited. A charming medieval village, dating back to 1281, it is located in the heart of Ségala, the land of a hundred valleys, between Rodez and Albi. 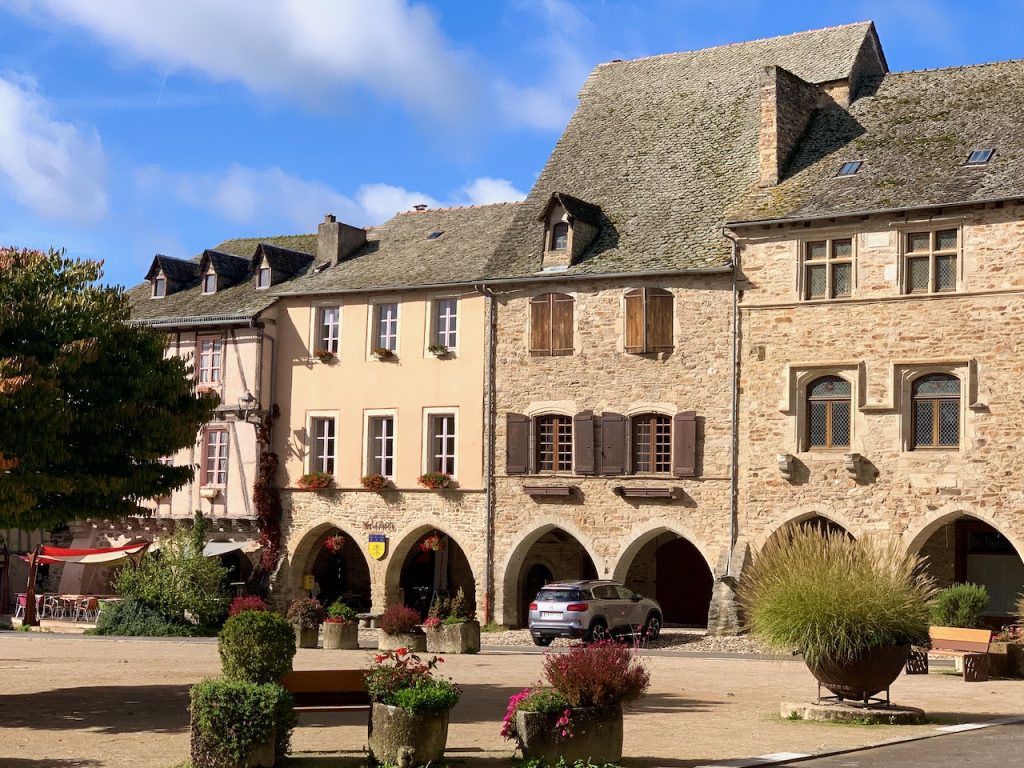 The central square with its 47 arches, edged with timber framed and stone houses is a delightful place to sit and become immersed in the age-old ambience. 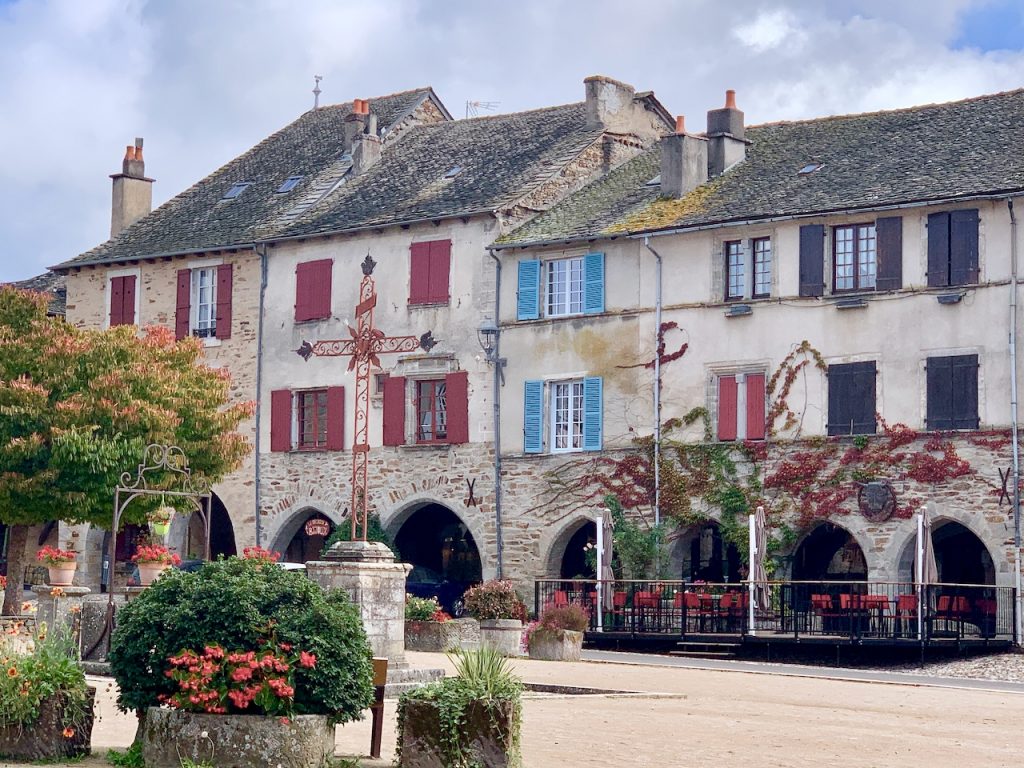 One can almost hear the clatter of small carts as people from a bygone era hurry across the cobbles below the arches to the market. 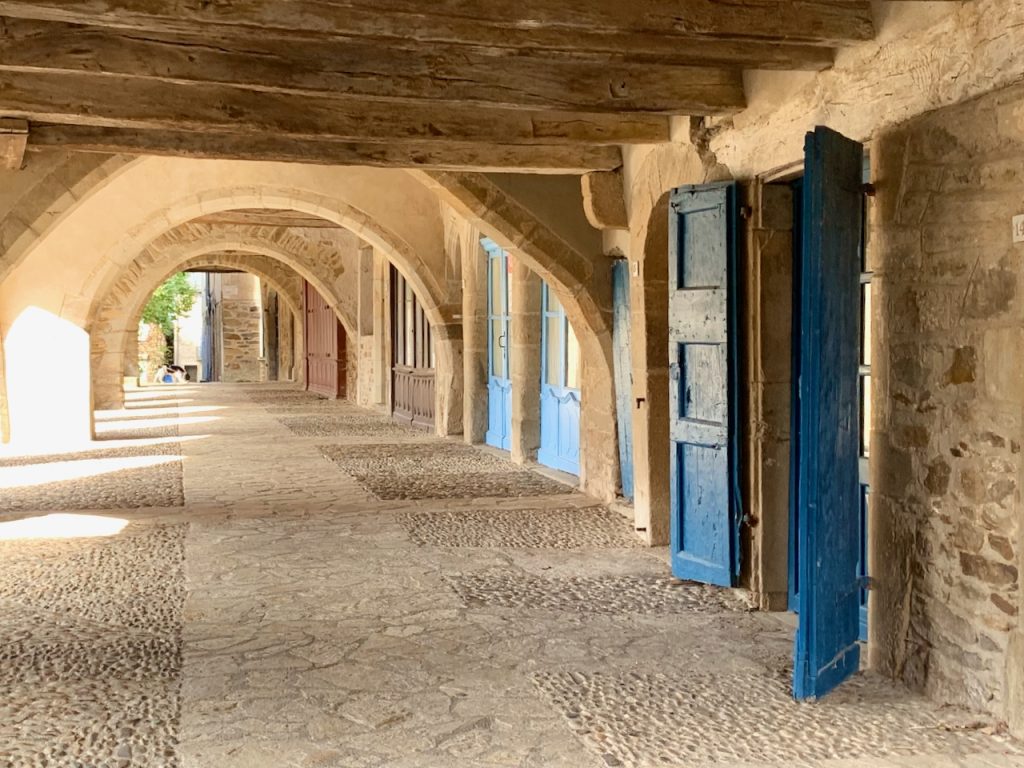 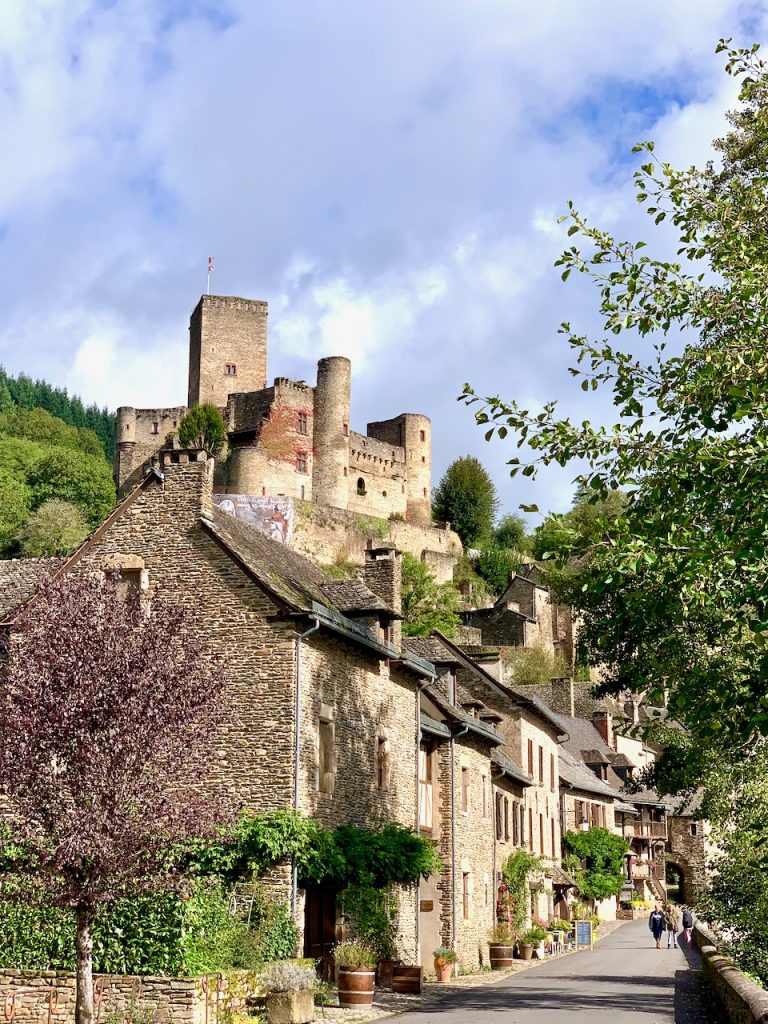 The magnificent fortress of Château de Belcastel, perched on a giant rock face, dates back over 1000 years. Initially it was a 9th century chapel which grew in size as generations of knights and nobles made their mark. It was abandoned in the 16th century until 1973, when renowned architect, Ferdinand Pouillon, began an eight year restoration process to make it his private home. An incredible historical landmark, the family still welcomes visitors to admire its art gallery, medieval armor and enjoy its stunning panoramic views.

Crossing the medieval bridge to the church, 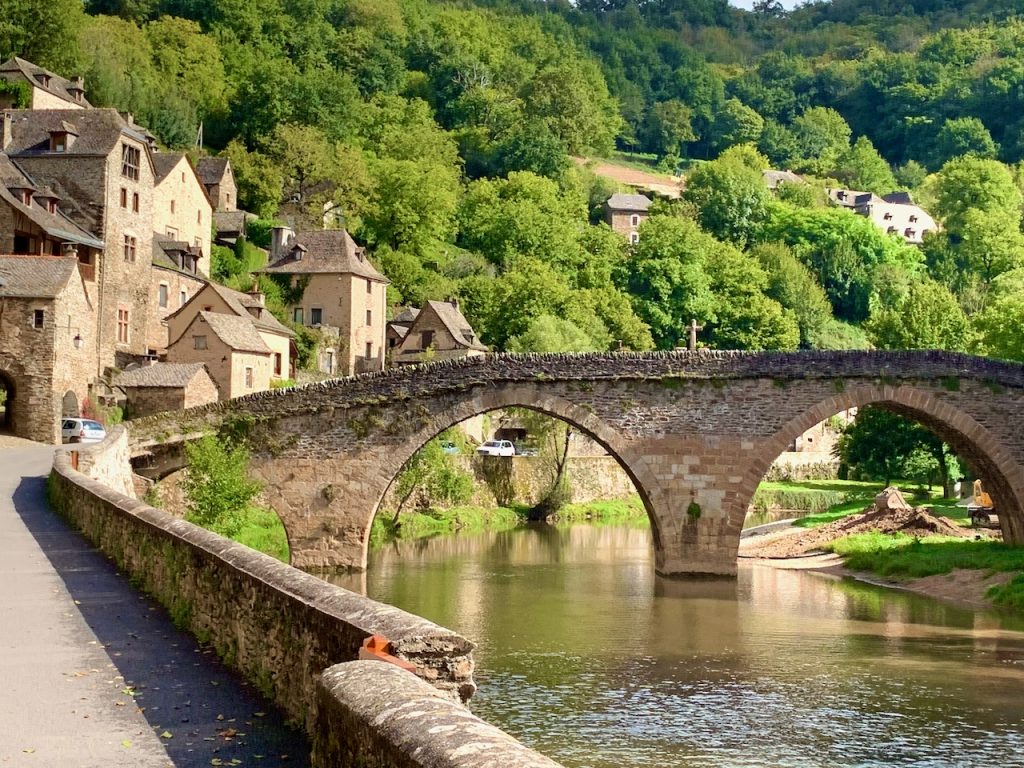 one is reminded of the power that religion played in people’s lives. 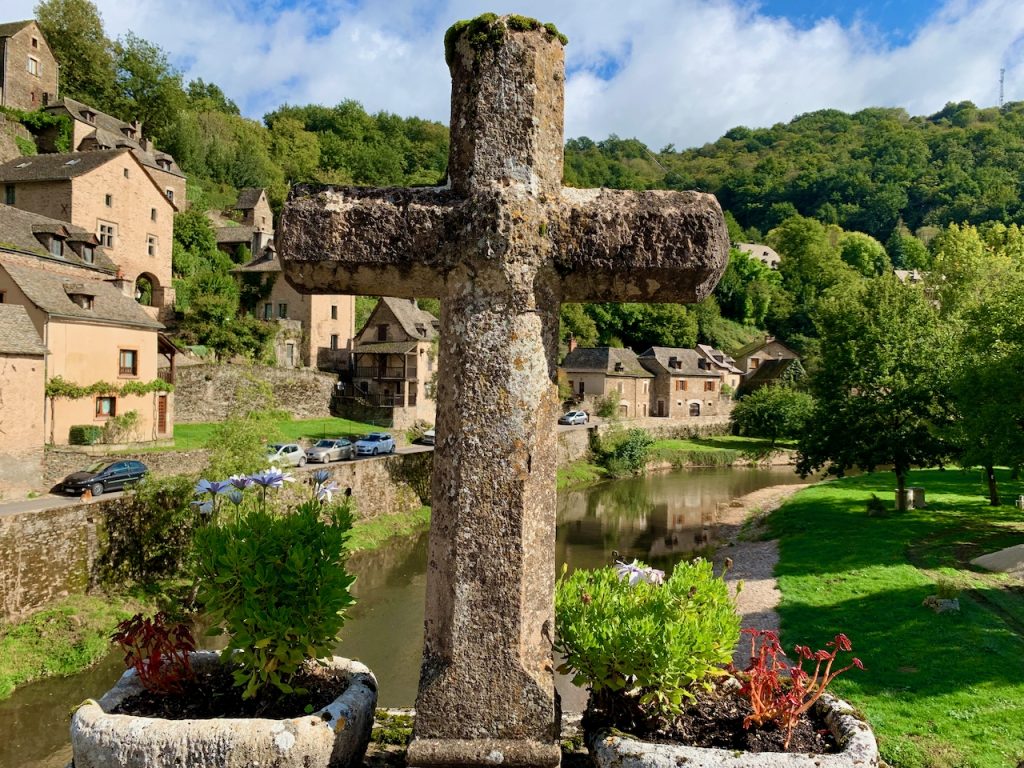 This place of worship, a short stroll across the water, might have been small but its importance in this tiny, medieval village, would have been immense for hundreds of years. 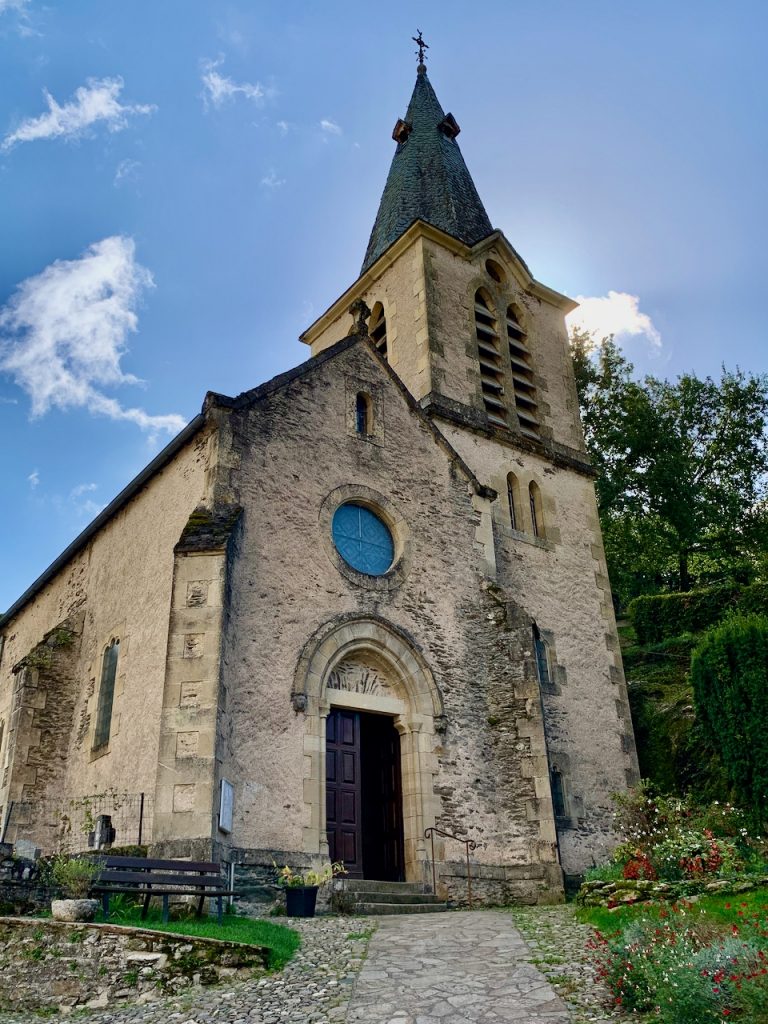 Our explorations for the day finished back in Rodez, the capital of the Aveyron region, in the north east of the Midi- Pyrenees region, between the foothills of the Massif Central and the plains of the southwest. 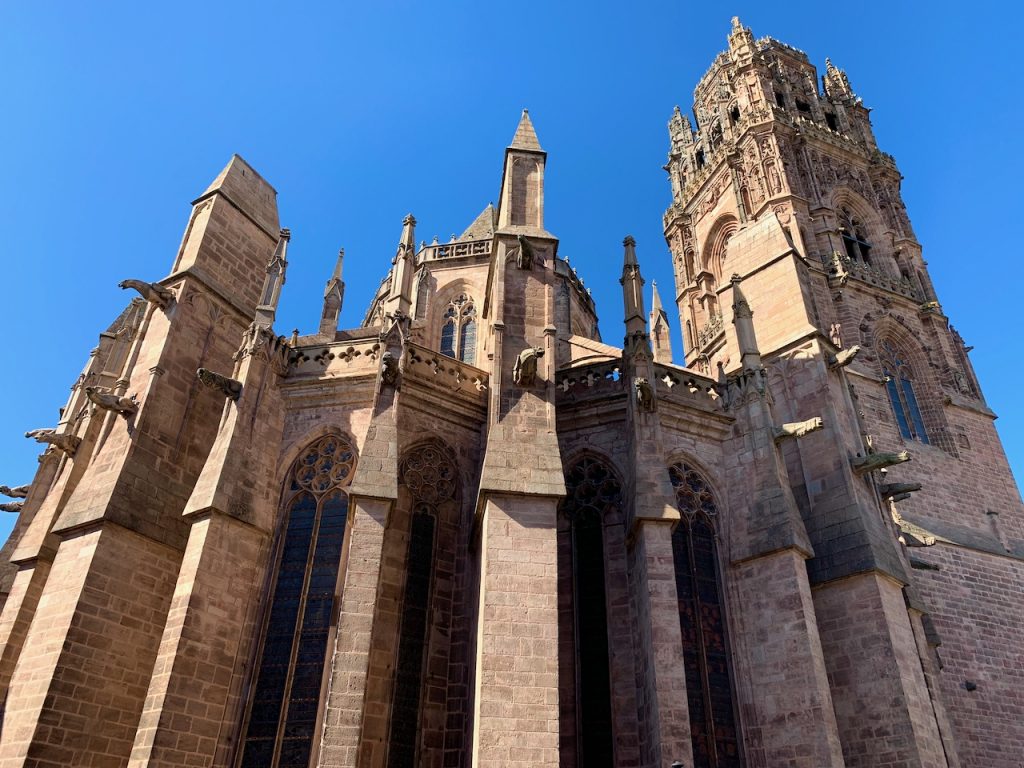 Set on a hill, Rodez’s gothic Cathedral Notre-Dame dominates the skyline. Its intricately carved tower reaching up above the old narrow streets. Inside it is just as magnificent. 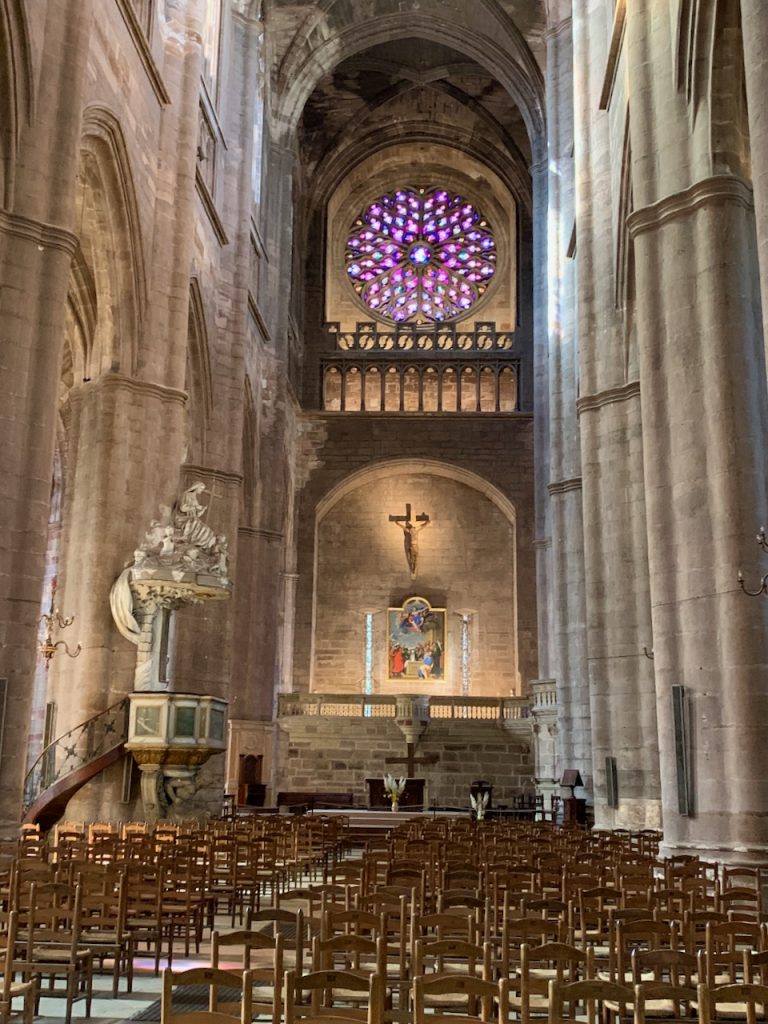 The city squares are flanked by fine medieval and renaissance buildings built from either local creamy pale limestone or red sandstone, like these city walls. 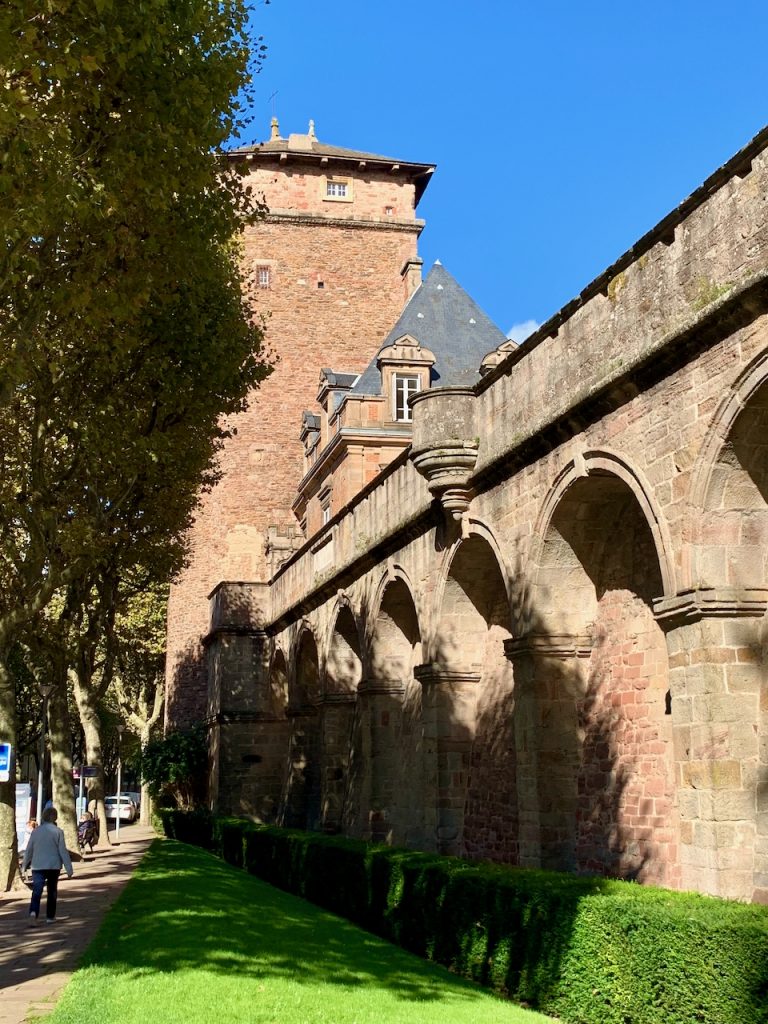 We returned to our château, a short drive from this lovely city, to dinner and wine in the hotel restaurant, wondering what we’d discover the following day on our continued exploration of the Aveyron.

Next post The Knights Templars and cheese of the Aveyron 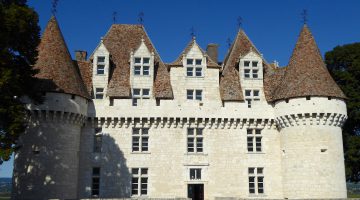