Boxing day is an English tradition, dating back to the Middle Ages. It is also St Stephen’s Day and has been a public holiday in England since 1871. There is much debate as to where it gets its name. Some claim that it is derived from the alms collection boxes, usually in churches, which were handed out to the poor, on December 26th. Others say that following Christmas Day, when most servants had to work, on December 26th, their employees handed them Christmas boxes full of gifts or money and gave them a holiday. Boxing Day is a time to relax, food preparation is minimal as everyone has lots of left overs, it is a day to watch Christmas films and do as little as possible. Today, it has sadly, also become an excuse for retail madness with many shops opening, often beginning their sales and hoards of people rushing out in hope of a bargain. It was never like that when I was a child. In our home Boxing Day meant more presents to open and more Christmas magic at my grandmother’s.

Like most mothers, my grandmother loved nothing more than to have her family gathered around her and Boxing Day was when this happened. Most of her 12 children would transcended upon her house by mid afternoon with presents, food and off spring! I can remember being incredulous that no matter how many arrived there always seemed to be space for us all. As a small child it was like a wonderful, Christmas party. All the children were dressed up in their ‘party best’ for a proper tea party, crackers were pulled, paper crowns donned, jellies and ice cream eaten, followed by party games, it was such fun!

The real highlight was the arrival of Father Christmas, a bell would be rung and the whole house would

become electrified by an almost eerie wonder. We were all ushered into our grandmother’s ’front room’ where there stood a floor to ceiling Christmas tree surrounded by a skirt of brightly coloured, ribboned parcels. There would hardly be a spare piece of carpet, there were so many of us and a hush would descend as the anticipation mounted. I can remember being quite scared at the thought of Father Christmas’ arrival. That this mythical, wondrous man, was actually coming to visit us. His arrival would be announced by a great ringing of bells and the booming voice of one of our Uncles, warmly welcoming him inside. Huddled in the front room we would all wait, wide eyed with expectation, some of us clutching timidly to our parents as the door was thrust open and there he was, red coat trimmed with fur, black boots and a big smiling face waving to us all and wishing us ‘Happy Christmas’! It was like stepping into a story and one, when I was only five, I wasn’t totally sure I liked! Presents were distributed and the charged atmosphere gradually relaxed as gifts were investigated and everyone became caught up in the giving and receiving of presents. Somehow the wrapping paper, ribbons, and toys would be cleared away and everyone dispersed. I am not quite sure exactly how but all the children were somehow clad in their pyjamas and deposited upstairs, sharing giant mattresses on the floor while the party for the ‘grown ups’ continued downstairs to much laughter and dancing. None of us ever dared to venture back down stairs but then again why would we, with so many of us, we were enjoying our own giant children’s slumber Boxing Day party!

Previous Article Christmas Day ~ when I was a child 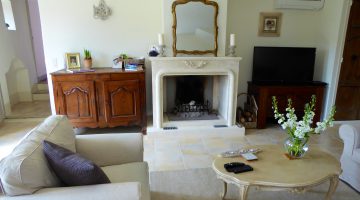 Maisons des Cerises ~ Our village house for rent in Lourmarin