Laphroiag single malt whisky has been described in many ways

by those who enjoy its sensuous, peaty flavour.

‘A dank tench of seaweed peat and salt, with a light haze of freshly mown hay, unmistakable’

So how is Laphroaig’s golden nectar of delight created?!

Creating Laphroaig single malt whisky, like many whiskeys begins with the barley. Only six distilleries in Scotland malt their own barley, four being on Islay, one of which is Laphroaig. Laphroaig malts about 3 million litres annually, 20% on site (the rest in mainland Scotland) preserving the traditional methods and Laphroaig’s unique peaty flavor. The barley is bought in from the mainland and soaked for 2 days in steeps, its water being changed twice. Now referred to as ‘Green Malt’, it is laid out on concrete floors for about seven days to germinate and turn its natural starch into sugar. To ensure an even process, the barley is turned every four hours, initially with hand held ploughs and then by machine, its temperature being constantly monitored. 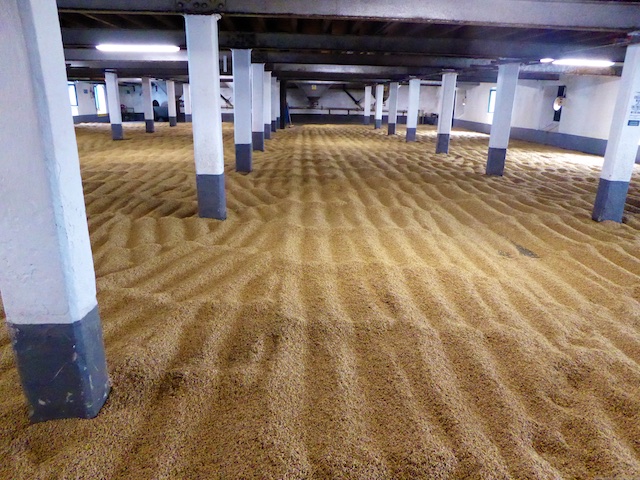 The barley is then shoveled to the floor below and smoked for 13 hours by a peat fire; the salty sea air mixes with the smoke from the peat; the heather, mosses and lichens, introducing the peaty flavor to the grain. To stop further germination the malt is dried for 20 hours by hot fans and then stored in malt bins to rest for 3 weeks. At Laphroaig they peat first and then dry, believing this enhances the flavour, other distilleries peat and dry together. 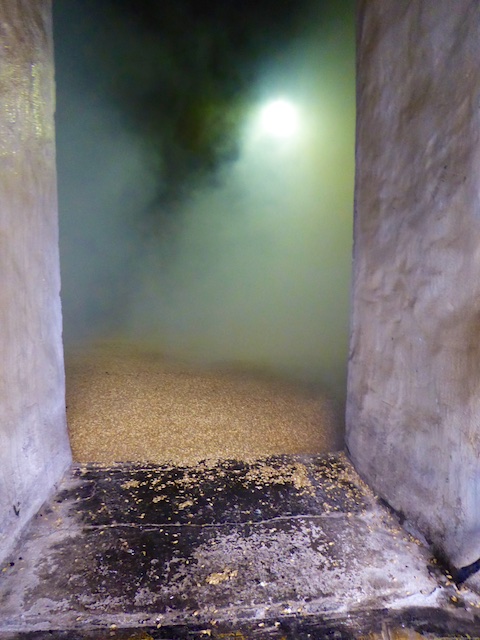 The Peat fires have been at Laphroaig since the 1840’s, they are about 6ft deep and need to be stoked every 20 minutes. 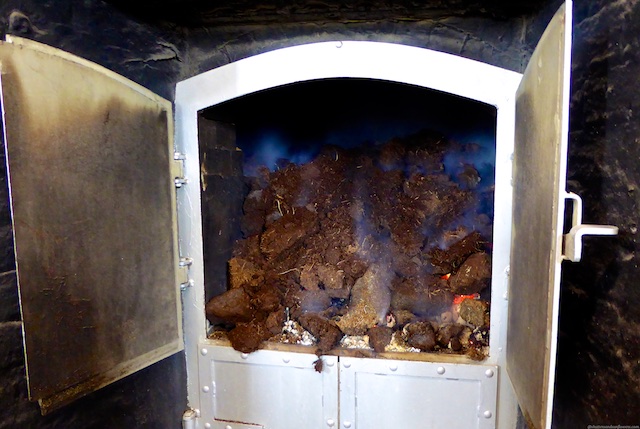 Laphroaig has it’s own peat fields, a short distance from the distillery. 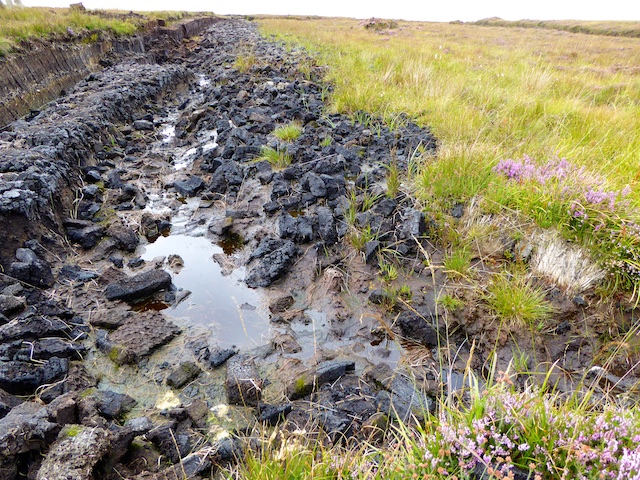 Laphroaig is the only distillery to still hand cut its peat. Traditional hand cutting tools are used which help retain the moisture in the peat. This means when the peat burns it creates more smoke and less heat maximizing the absorption of peat flavours to the malted barley. About 250 tonnes of peat are hand cut and stored at the distillery every year. 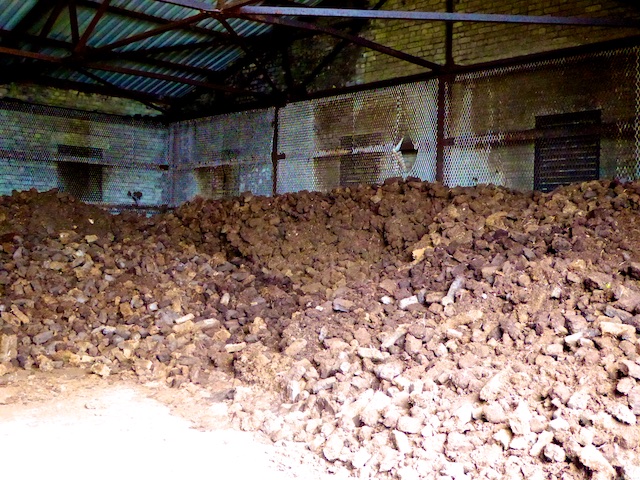 The next step in creating Laphroaig single malt whisky is the mashing, a process which extracts the sugars from the malted barley after it has been milled and ground into grist. The grist is put into the masher, called a lauter tun and mixed with hot water in three stages to dissolve the sugars and flavors. The weakened sugar extract from the stage three water is held back and used as stage one water for the next mash. The remaining solids, called draff, are collected and used as animal feed. The sugary extract which results from the first two washes is called wort. This is filtered through the barley husks and collected into a stainless steel wash back, (traditionally these were wooden, Laphroaig introduced stainless steel in the 1970’s.) 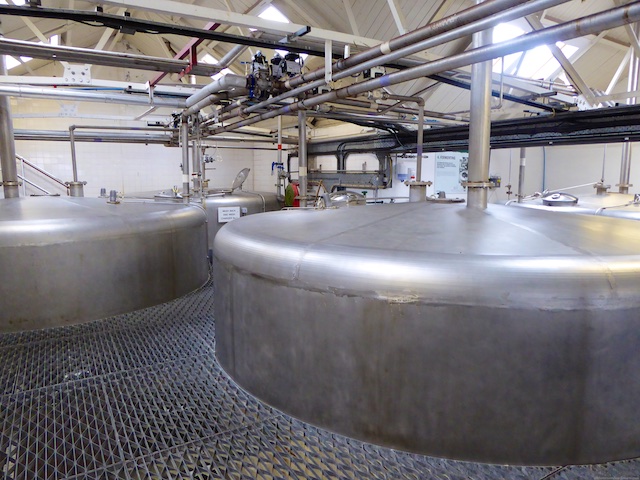 The wort is cooled to below 19 degrees and transferred back to the stainless steel washback where the yeast is added to convert the sugar into alcohol. This process takes about 50 hours creating a sweet, beer like liquid called wash, with an alcohol strength of over 8%. 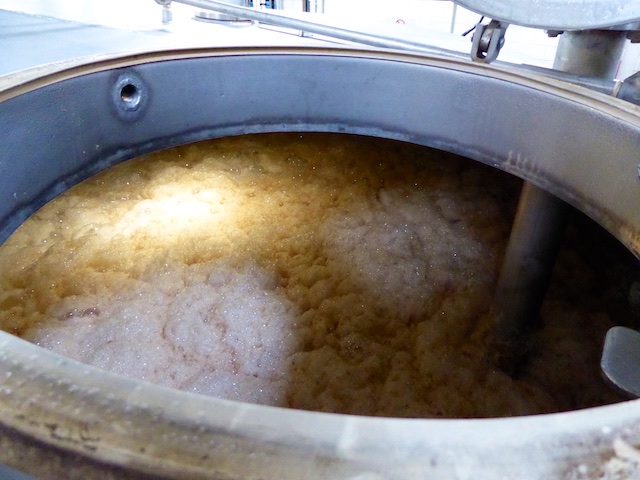 The water used is very significant, each distillery on Islay has its own water source, Laphroiag’s is from the Kilbride Loch. 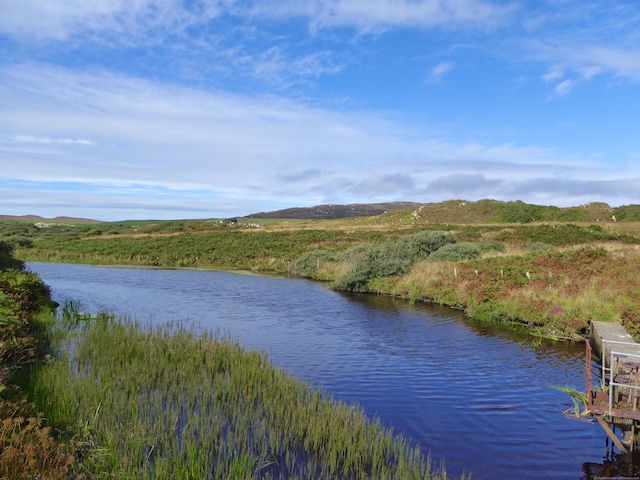 To turn the wash into spirit it has to be distilled. At Laphroaig this is a two stage process first in the wash still then the spirit still. The shape of the stills is very significant and affects the final flavour of whisky. The seven Laphroaig stills are lovingly maintained and when worn out exactly copied including the dents! The first distillation produces low wines with an alcohol percentage of about 22%. 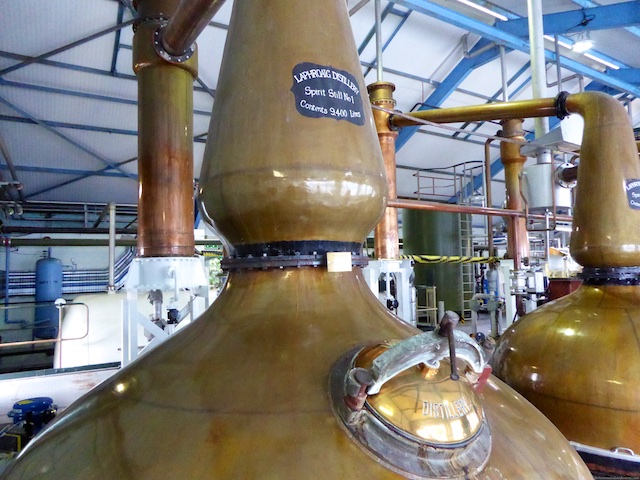 These low wines are still full of impurities hence the need for the 2nd distillation in the smaller spirit still which taked the alcohol content up to 68%. The secret is then where the cut is made creating the spirit that is finally going to become Laphroaig. 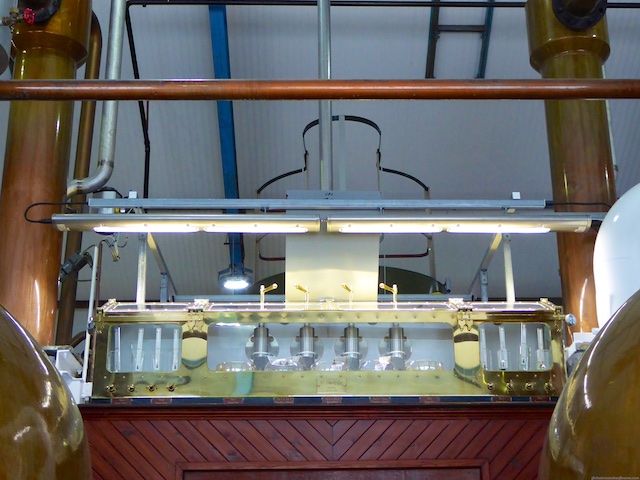 The last step in creating Laphroaig single malt whisky is filling the casks. Once distilled, the spirit is put into casks. 90% of Laphroaig casks are American white oak, bourbon casks which by law in USA can only be used once. Laphroaig uses mostly Makers Mark casks. Each cask can hold 200 litres of spirit. Laphroaig employs a traditional cooper, using tools which have not changed in over a 100 years, he ensures the condition of the casks. 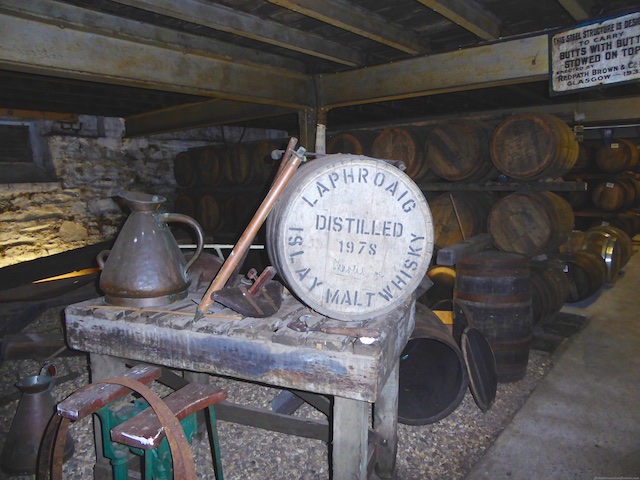 The final step in creating Laphroaig single malt whisky before it is bottled is the maturation process. To enable the spirit to reach perfection it must be given time to mature in the cask. Legally it must be stored for a minimum of three years to be allowed to be called whisky. For each year the spirit is left to mature 2% is lost to evaporation (the Angels share) creating space in the cask for the natural sea air to combine with the wood and the spirit to enhance the flavor. 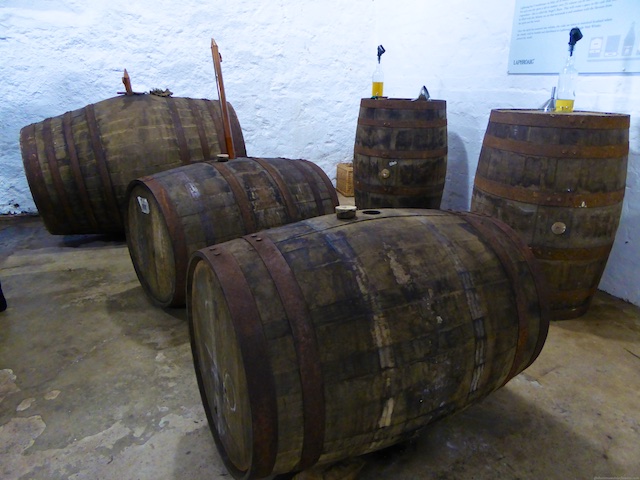 Laphroaig has nine warehouses on Islay. About 62 thousand casks are stored on site, mixed ages are stored together. Different temperatures change the whisky, so no two casks taste same. Whisky from different casks of the same age are blended by the master blender to make a single bottle, unless the whisky is a single cask whisky. 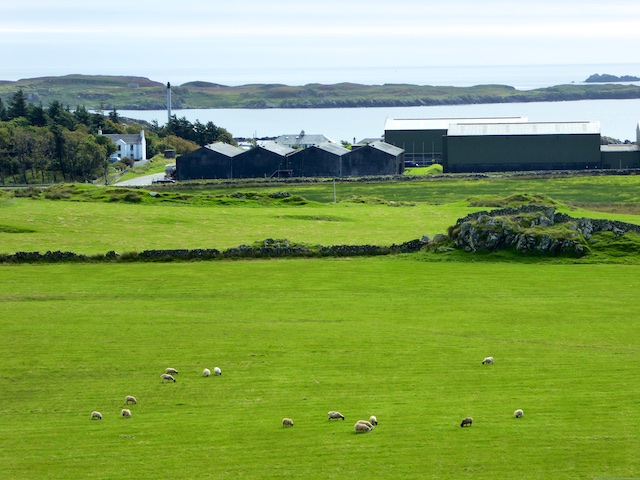 When the spirit has matured into whisky it is taken and bottled on the mainland. 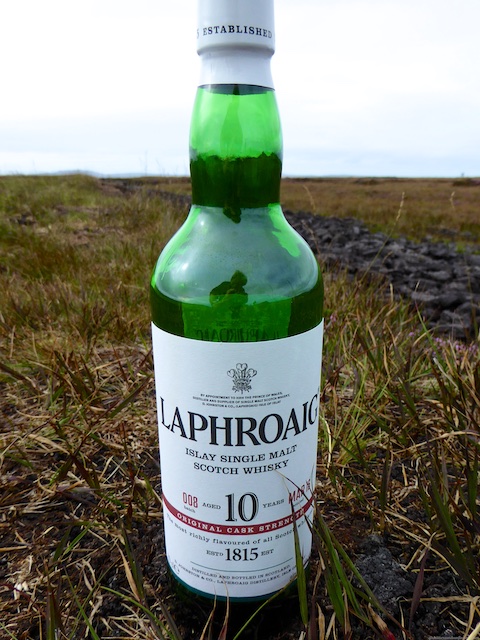 It is then distributed and sold around the world, an acquired firey taste like no other! 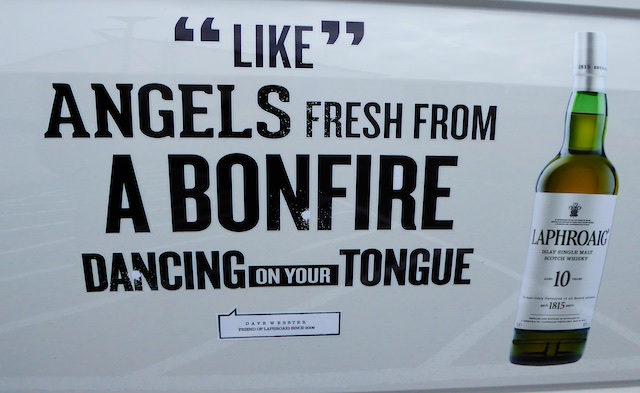 Learn more about Laphroaig by visiting its website here 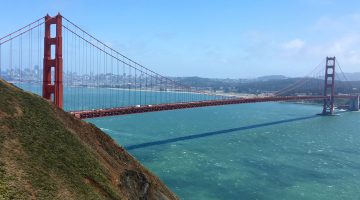