Our final morning at Yellowstone was possibly the most incredible. The clear blue skies probably helping to make our final Yellowstone stop, the Midway Geyser Basin, look even more spectacular. The basin was only a five minute drive from where we’d been staying, and was most definitely a dramatic au revoir to this wondrous place.

Following the 1/2 mile board walk trail by the banks of the aptly named Firehole River. The hydrothermal sights we were about to see were both breathtaking and astonishing. 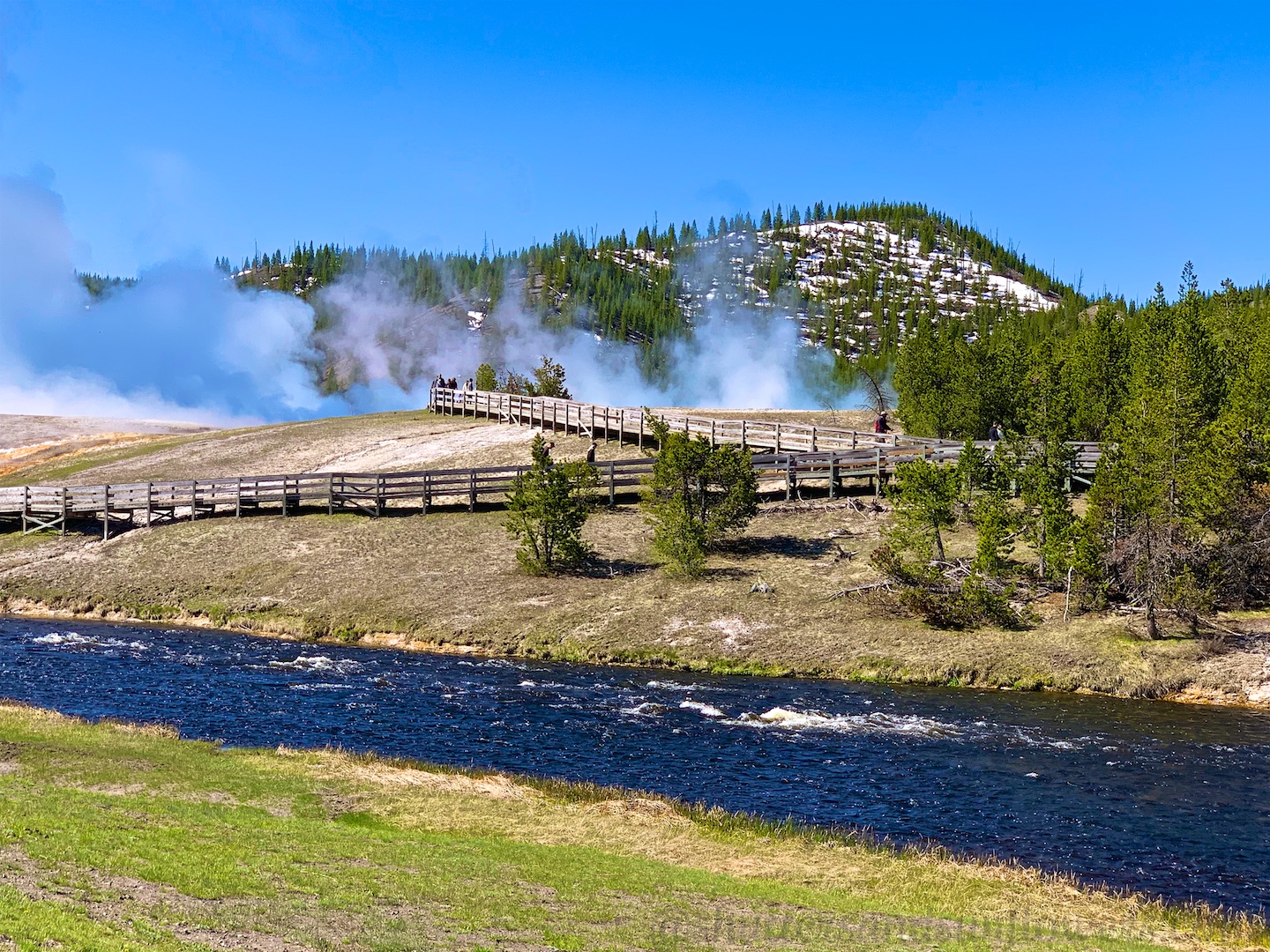 Each day, water from the hot springs and geysers in the Midway Geyser Basin pours nearly 500 gallons per minute of steaming water into the adjacent Firehole River. Scalding, bubbling ribbons rush down the rocks into the river below. 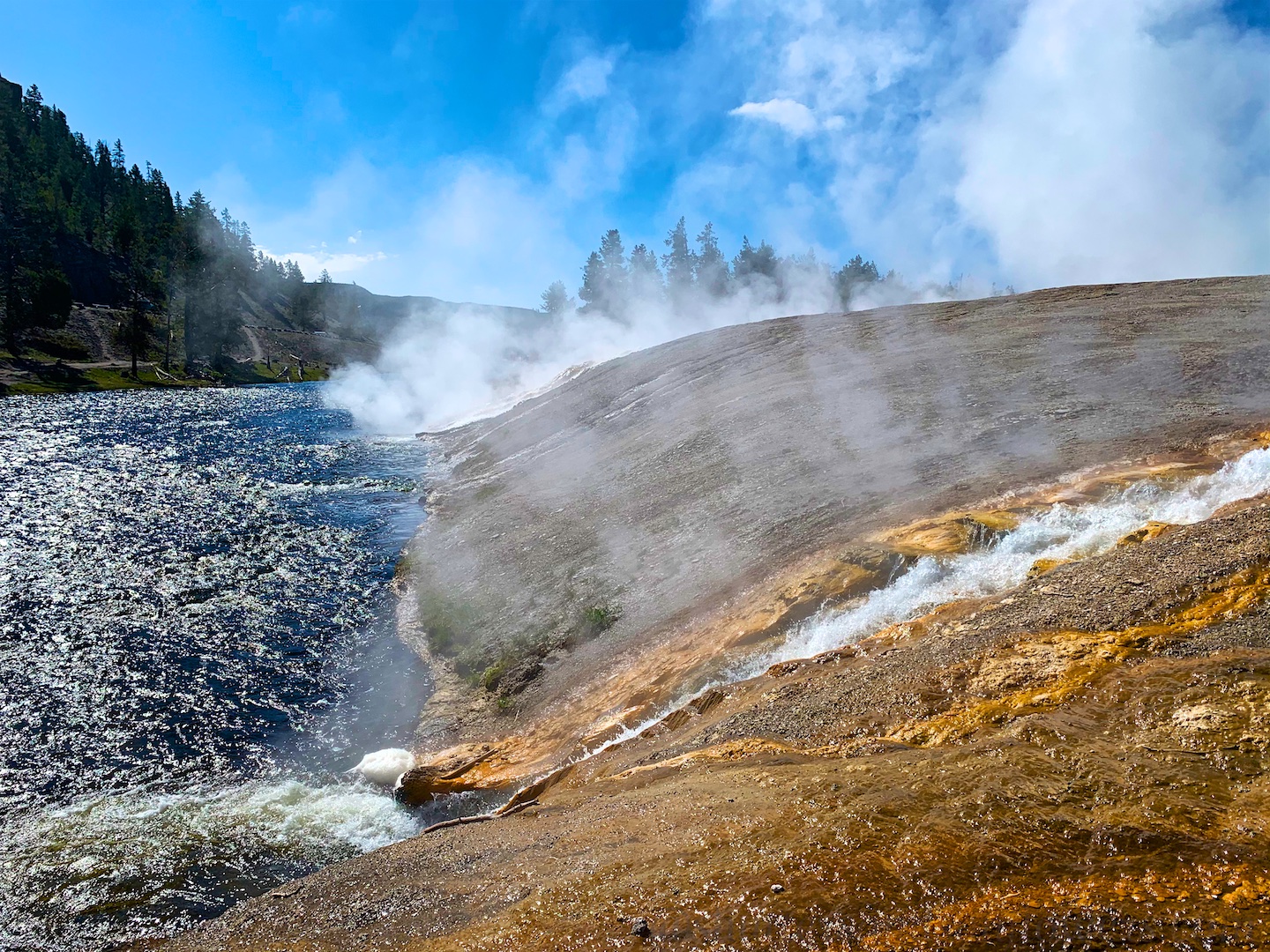 The first geyser, just above the river, was the Excelsior Geyser. When Excelsior erupted in the 1880’s, it reached heights of up to 300 feet. The sheer violence of its force formed the crater’s jagged edge rupturing its underground system and causing eruptions to cease, it was thought forever. 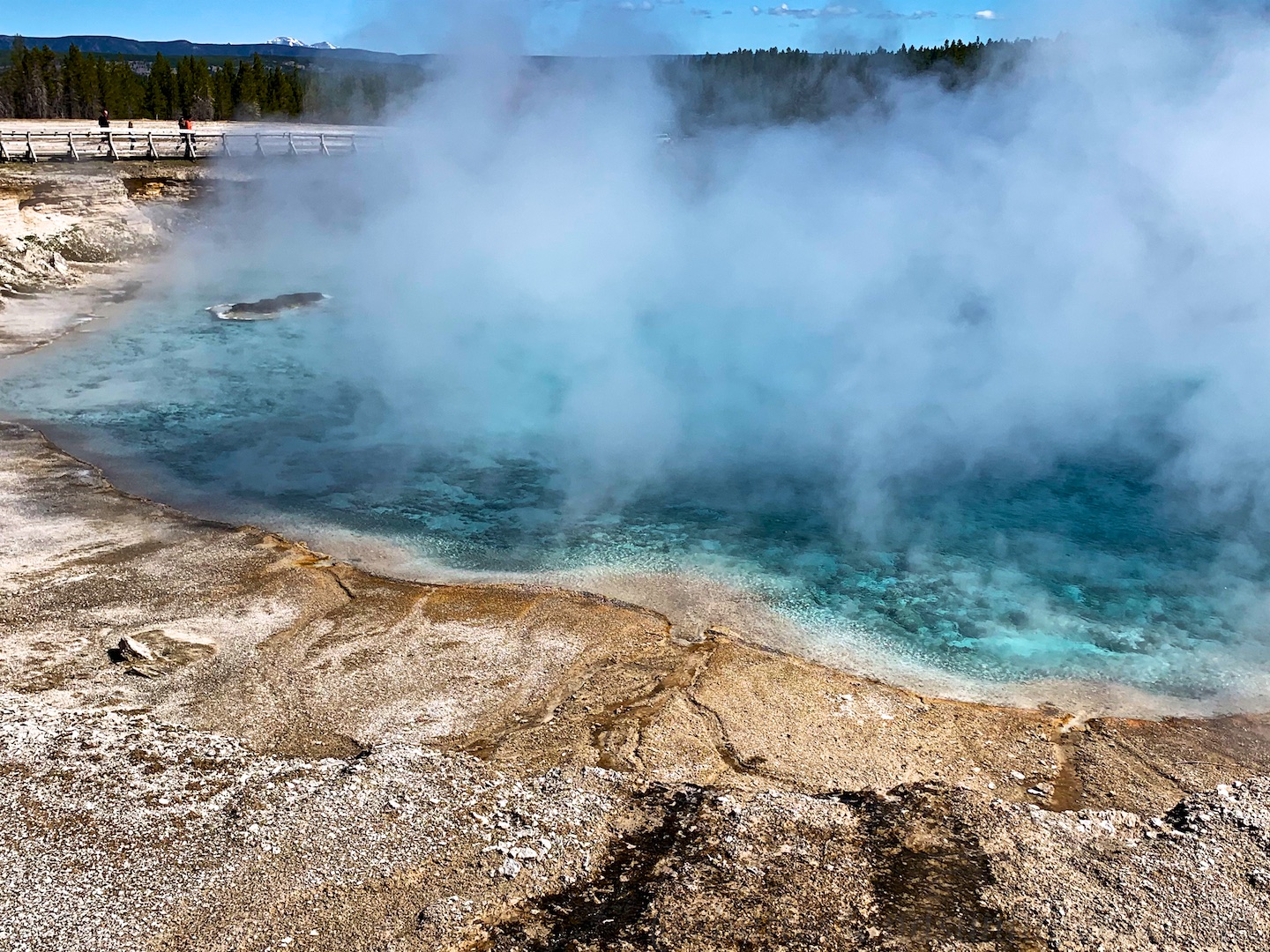 However, on September 14 1985, the Excelsior Geyser roared back to life with forty seven hours of major activity. Despite its erratic pattern, this geyser still contributes to the gallons of boiling water pouring into the river.

Around the edges of the rugged craters in the basin, thousands of years of past life have been preserved. 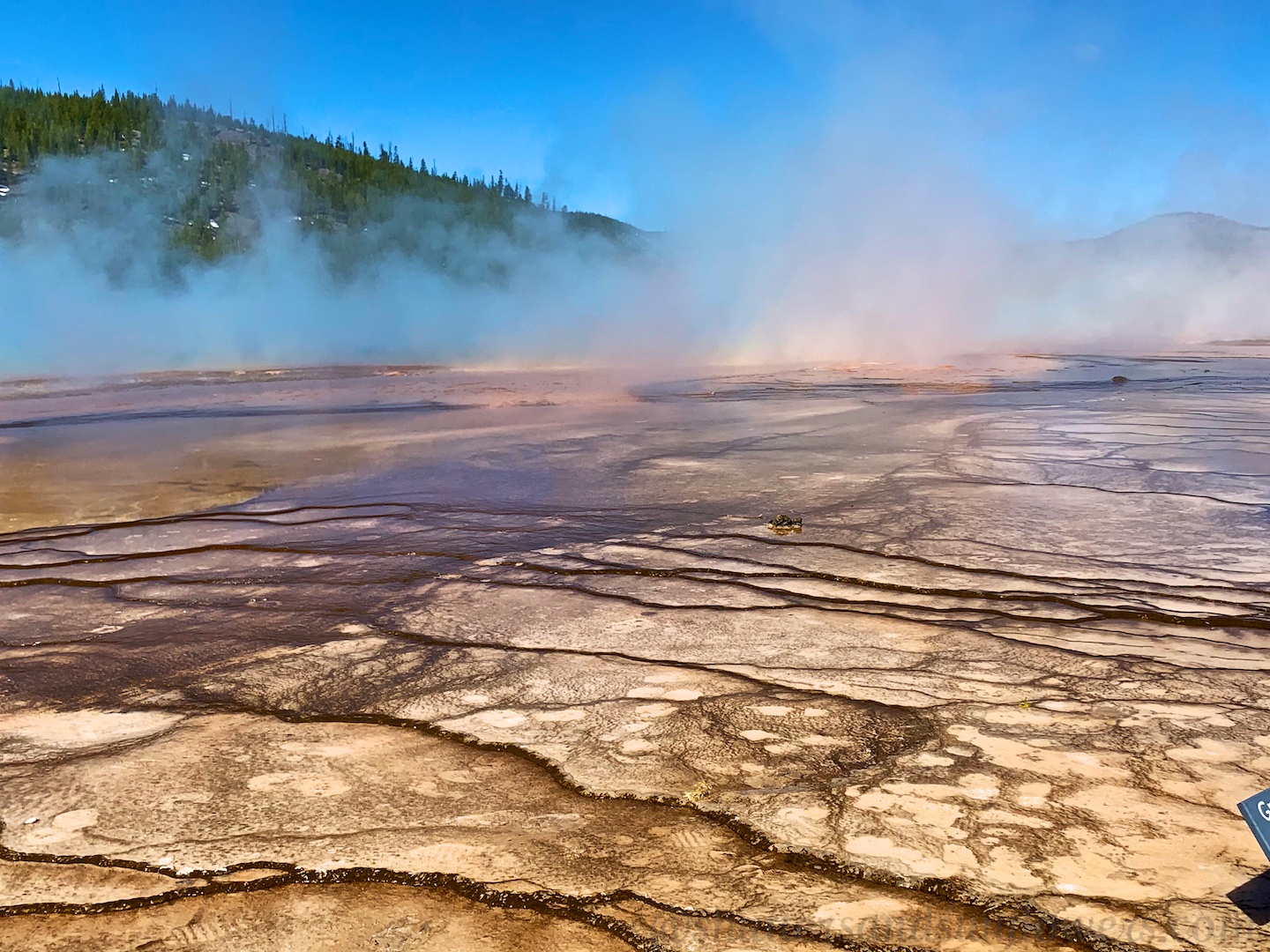 Microbes have grown in the run off channels extending from the geysers to become buried alive. The hot flowing water in the channels has deposited a crust of silica minerals called sinter which has helped preserve the shape of the resulting microbial mat. As new mats have grown, more layers have developed.

This stunning pool of golden, burnt umbers and blue is often referred to as a ‘Prism of Light’, and ‘Spectrum of Life’. One of the most brilliant of Yellowstone’s hot springs, it is perhaps the most beautiful and the most spell binding. The intense blue color is caused by the sunlight being scattered by fine particles suspended in the water. 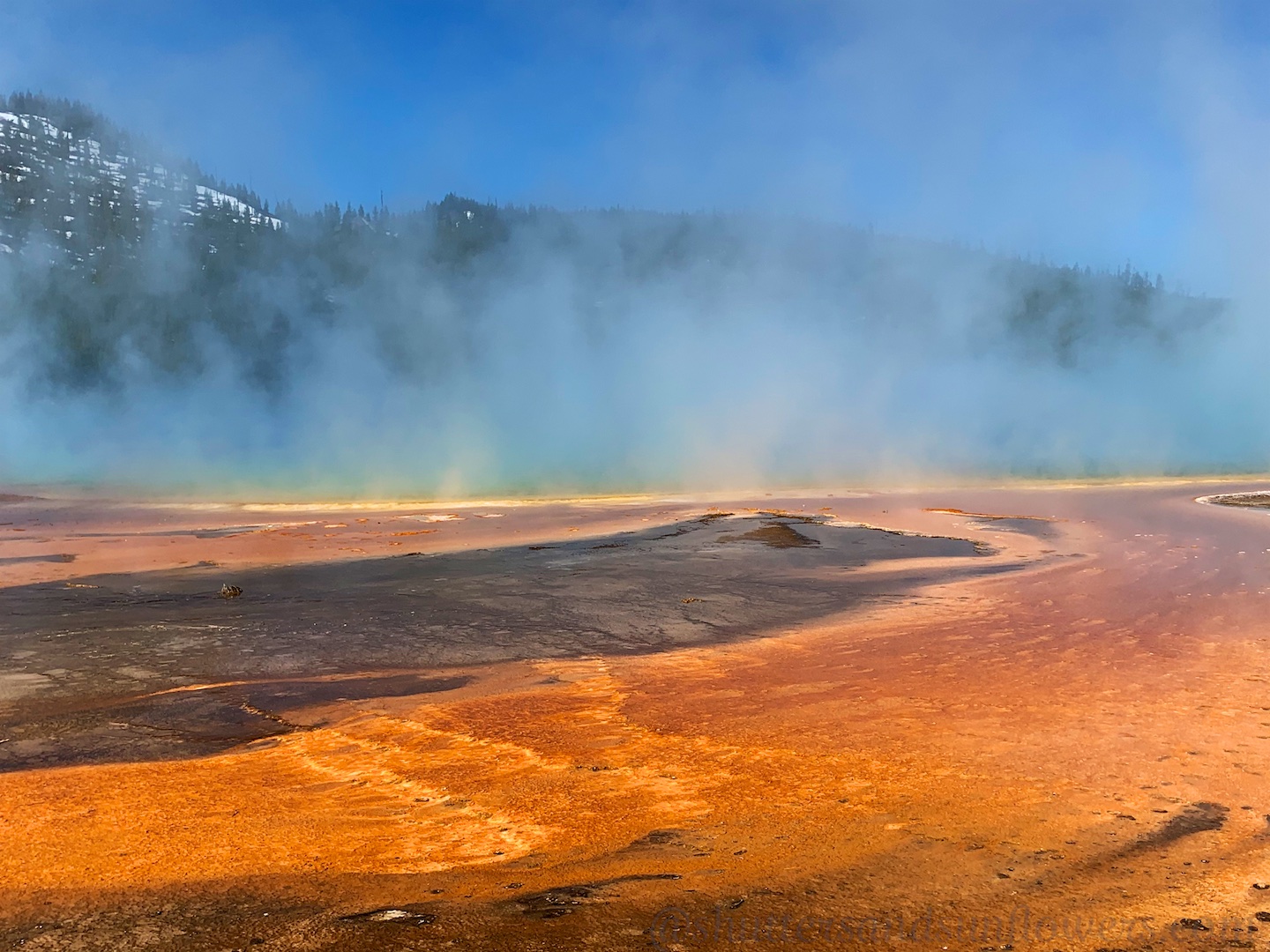 Grand Prismatic Spring is the largest spring in Yellowstone. It’s massive expanse spans approximately 200 feet across the water. With temperatures normally exceeding 160F, the spring is normally cloaked in steam. Incredulously, deep below the spring, magma from an active volcano still heats water which rises to the surface through fissures in the rocks, a further part of the scorching water streaming into the Firehole River. 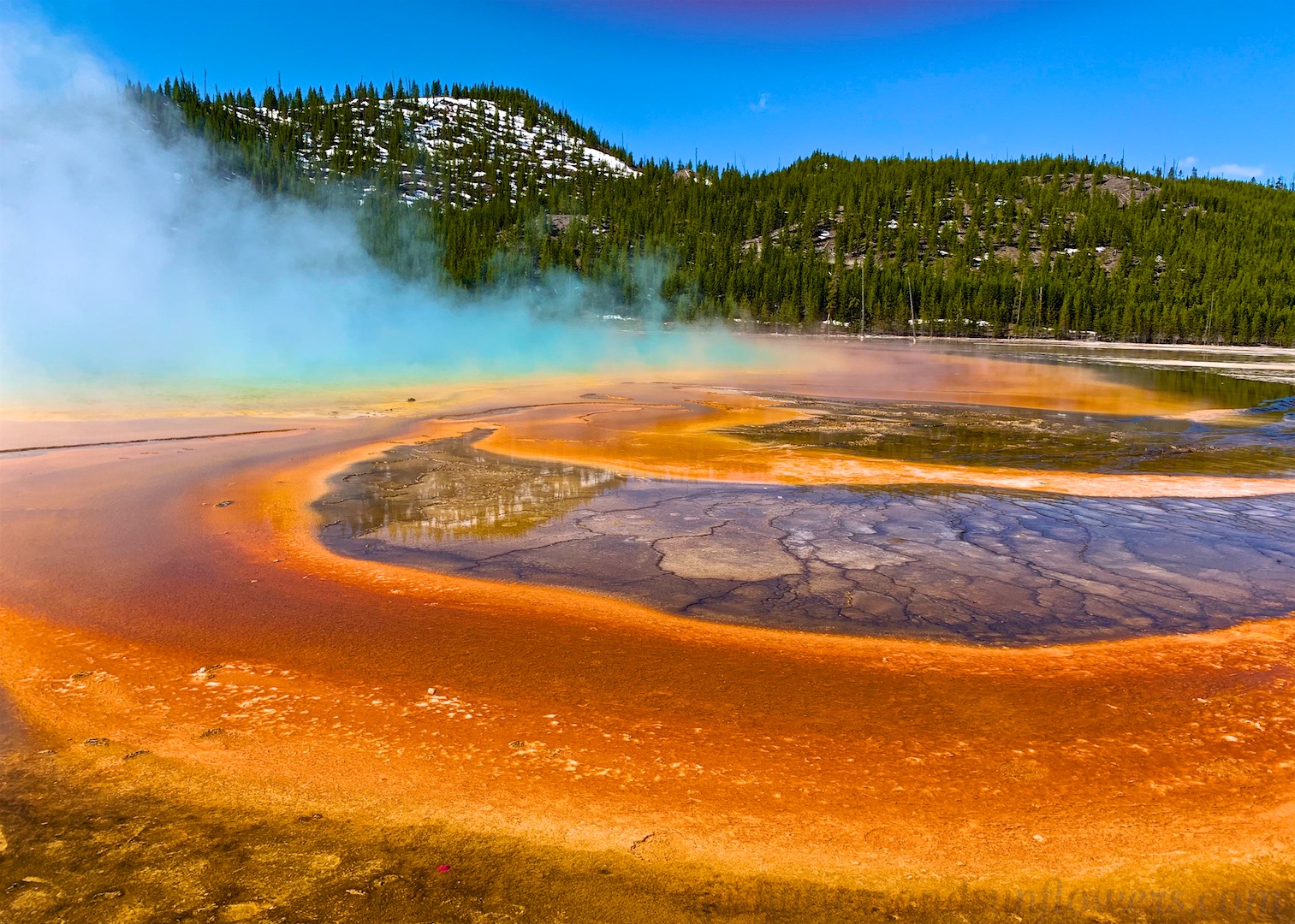 Minerals dissolved in the hot water are deposited and gradually build up the terraced shoulders of the springs. Within the rainbow of golden colors microbes exist in thick mats of vertical forests, barely a few inches deep. Those near the top (similar to a forest canopy) use sunlight to perform photosynthesis which fuels the mat’s community. Organisms further below the mat (similar to a forest understory) derive energy produced by those at the surface. They perform vital functions decomposing and recycling nutrients to the mat’s canopy just like their counterparts in a forest. The lifeforms found here have helped scientists understand the types of life that developed on earth billions of years ago

The Grand Prismatic Spring has some stunning neighbors: 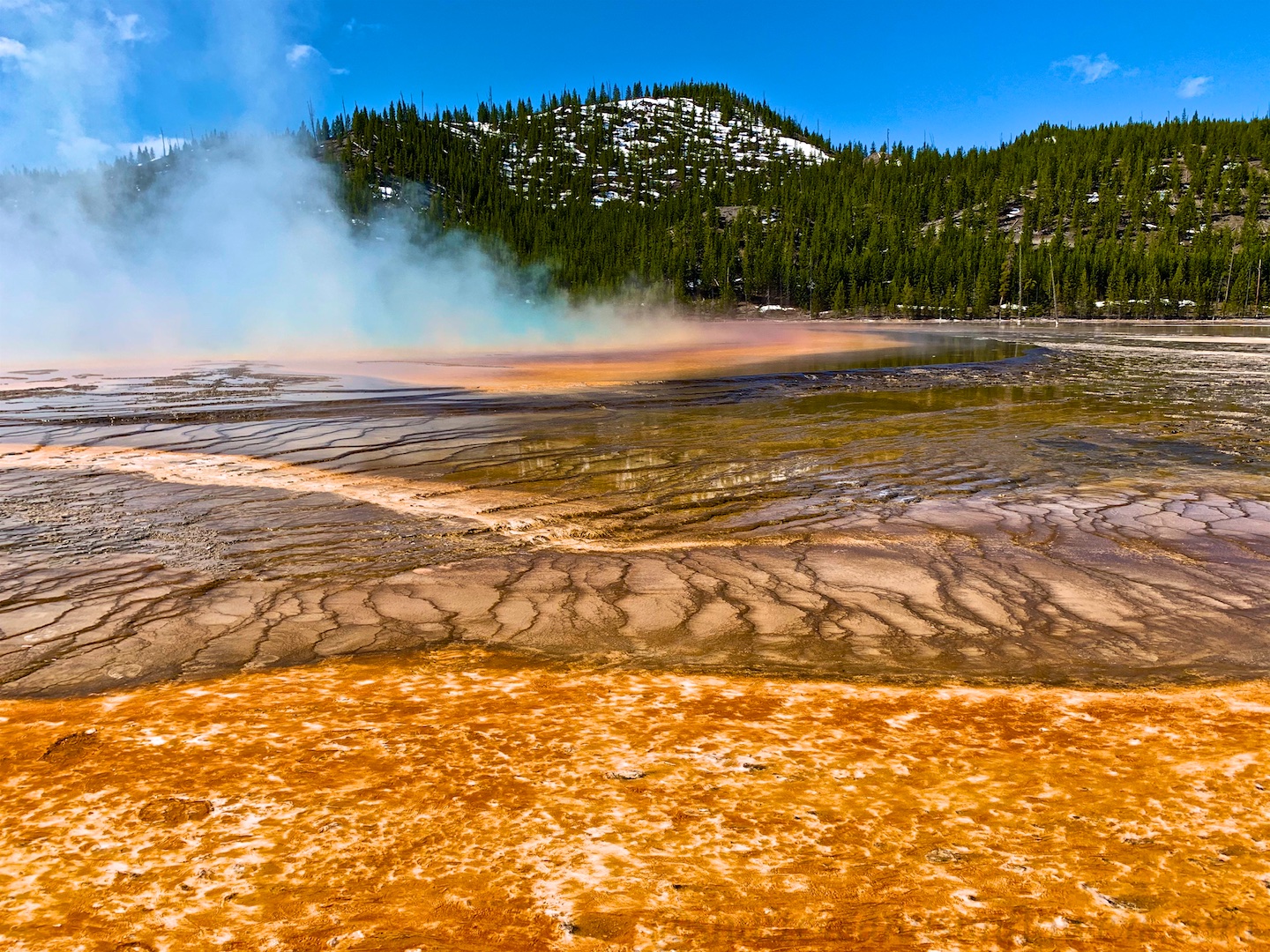 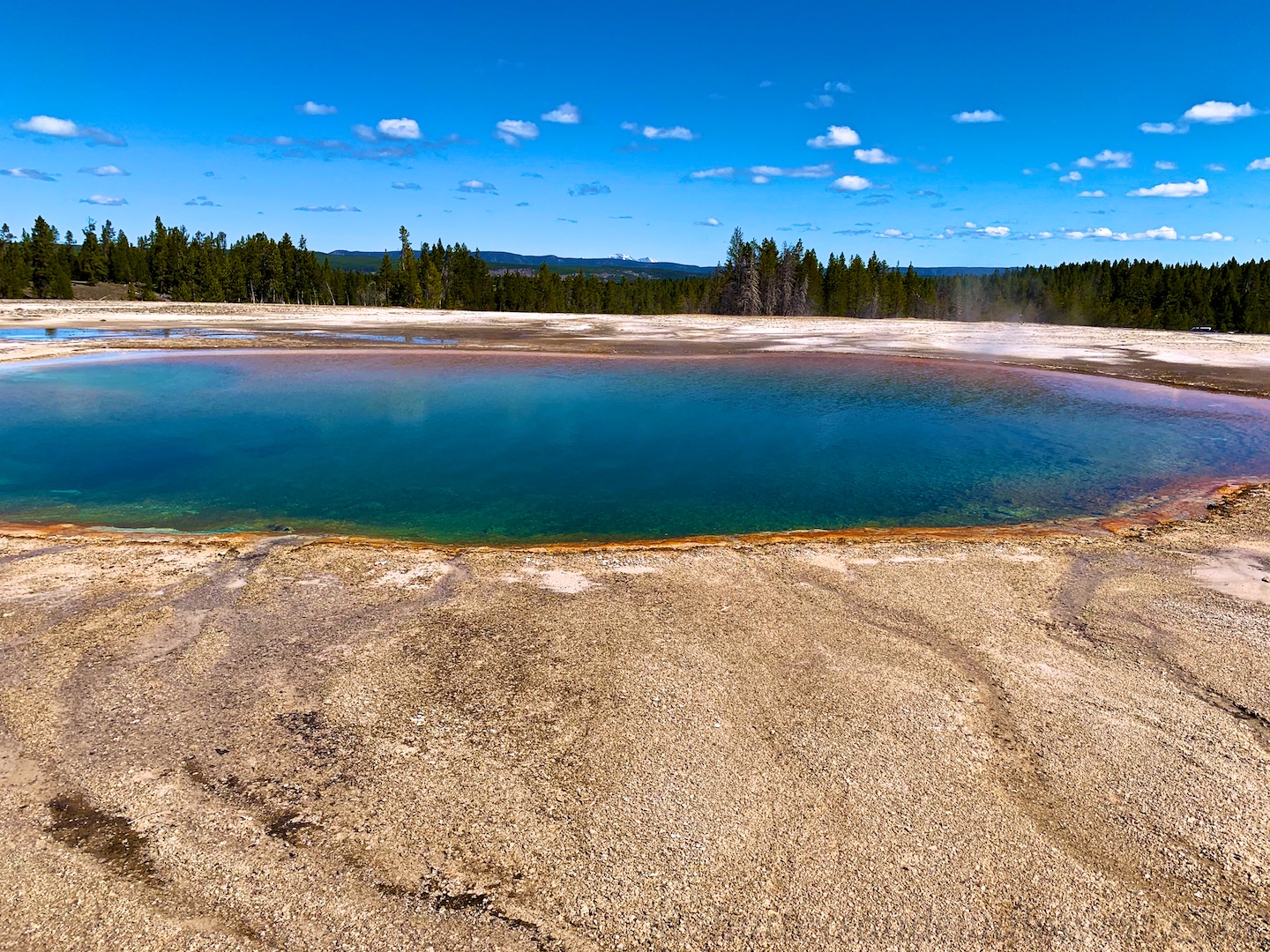 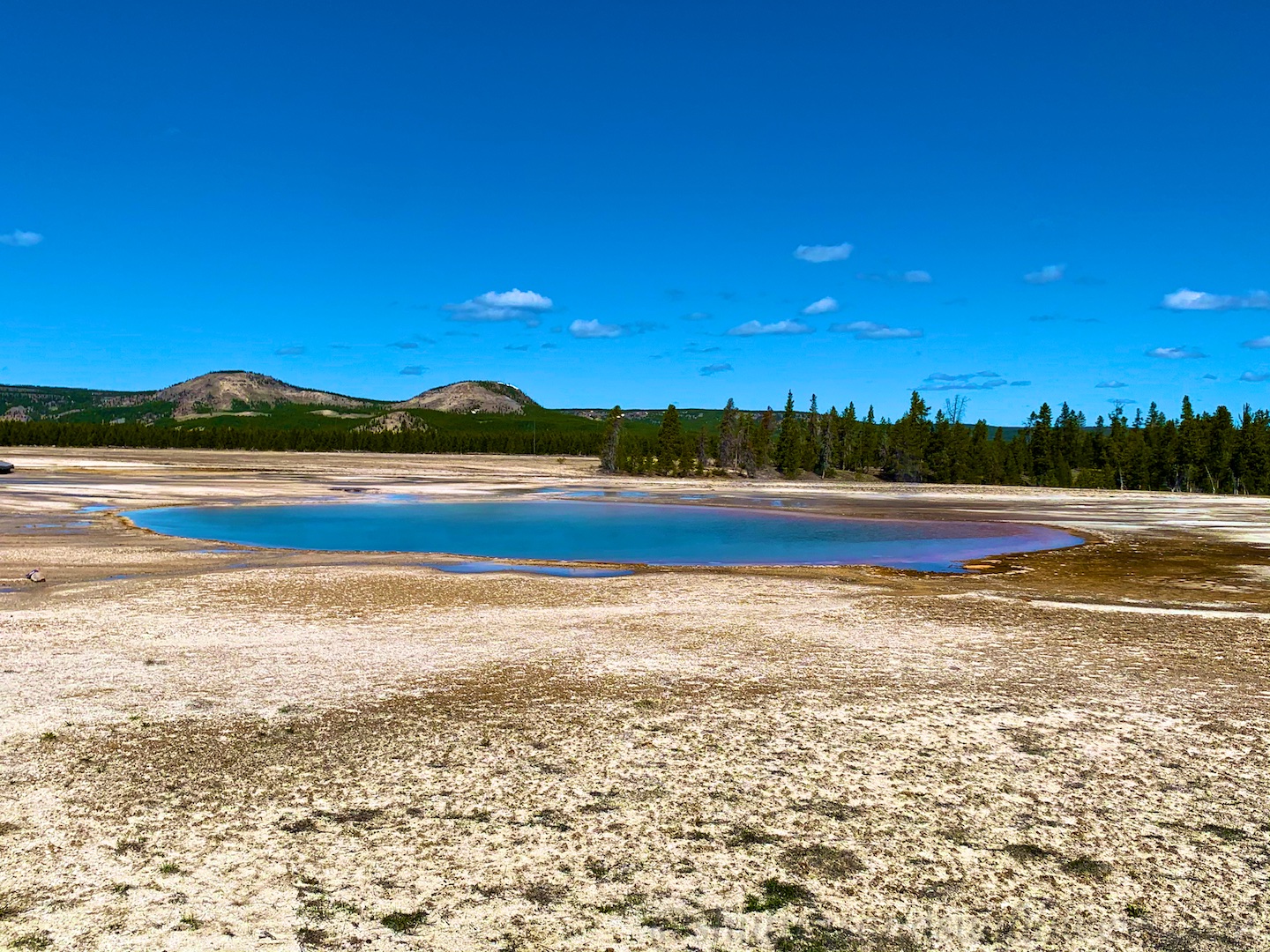 It was hard to leave this entrancing place and as I already know, it’s impossible to forget…. 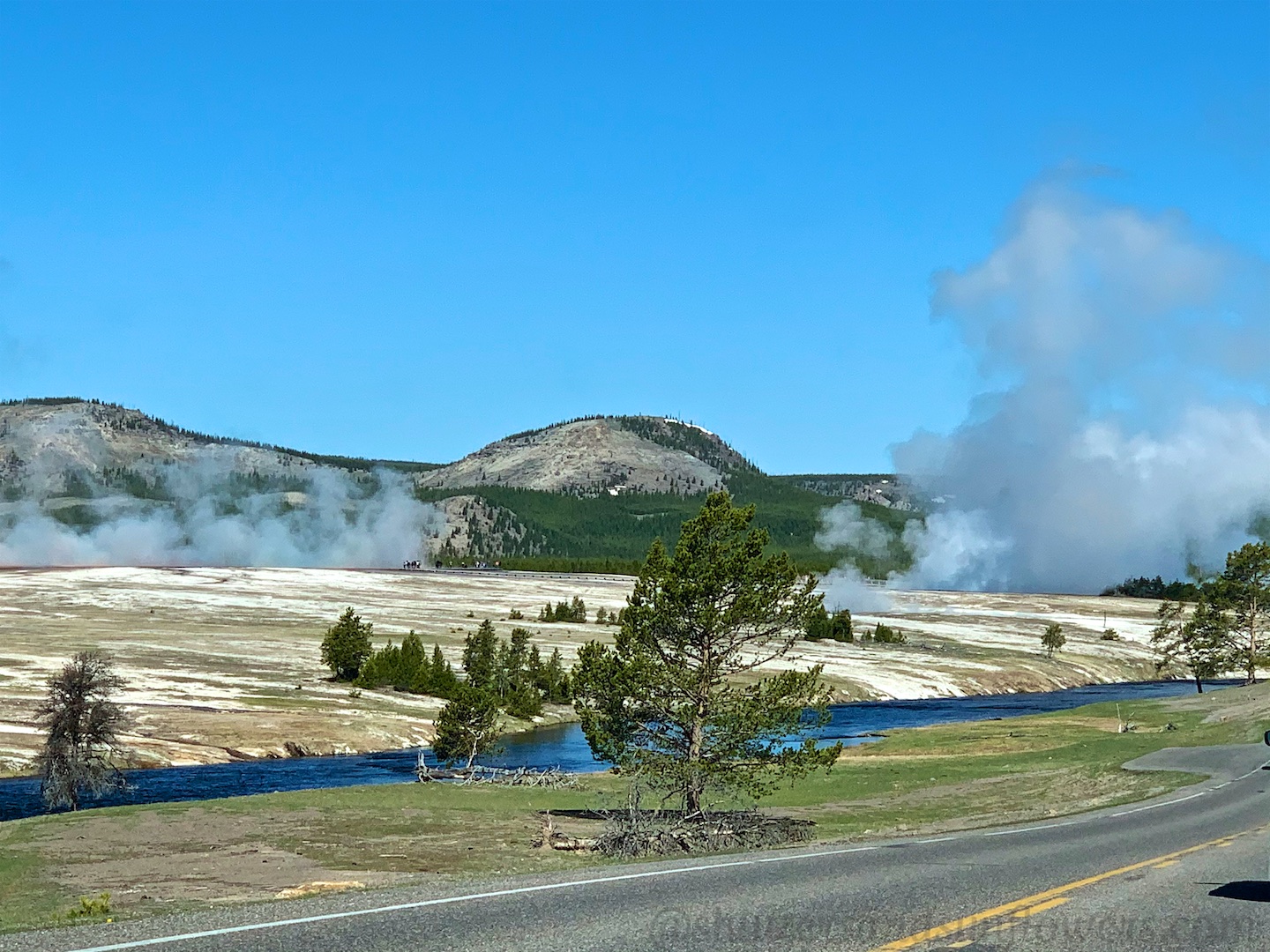 We headed through the park from Madison to pass the edge of the Caldera one last time. 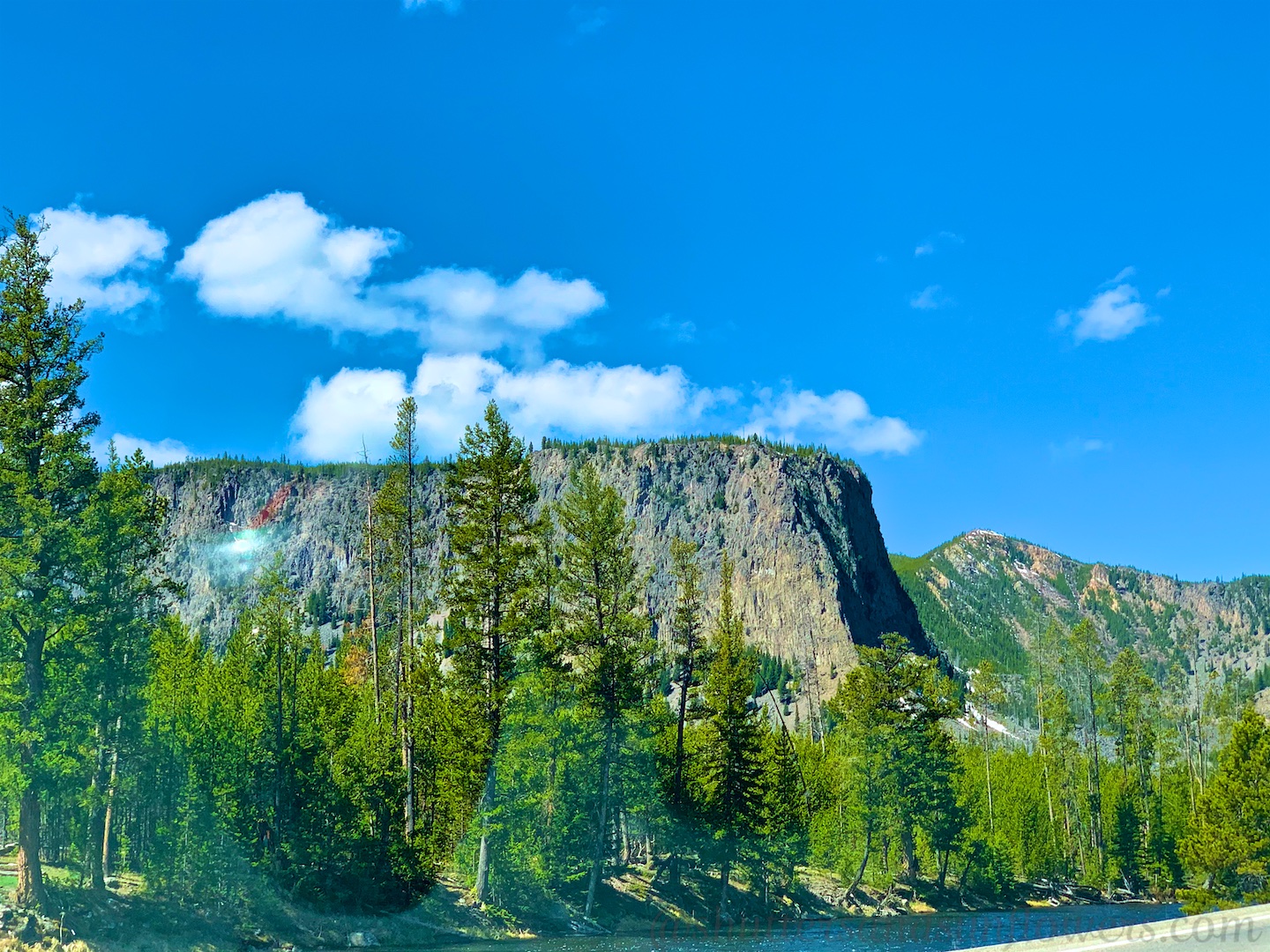 The distant snow capped peaks of the mountains were a stunning backdrop to the snaking Madison River as we made our way back towards the small town of West Yellowstone. 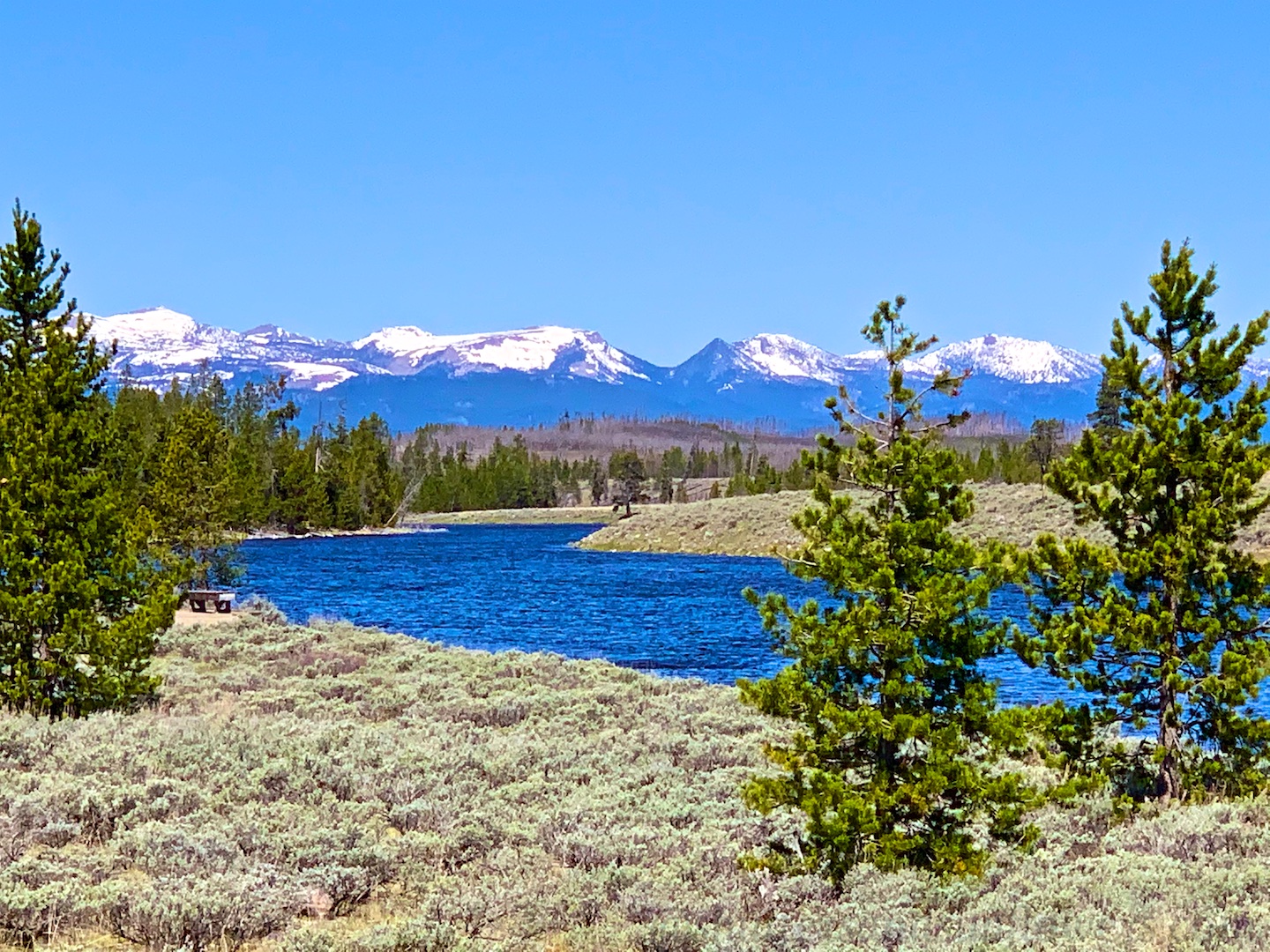 Those mountains loomed closer as we proceeded on Highway ’20’ into Montana. 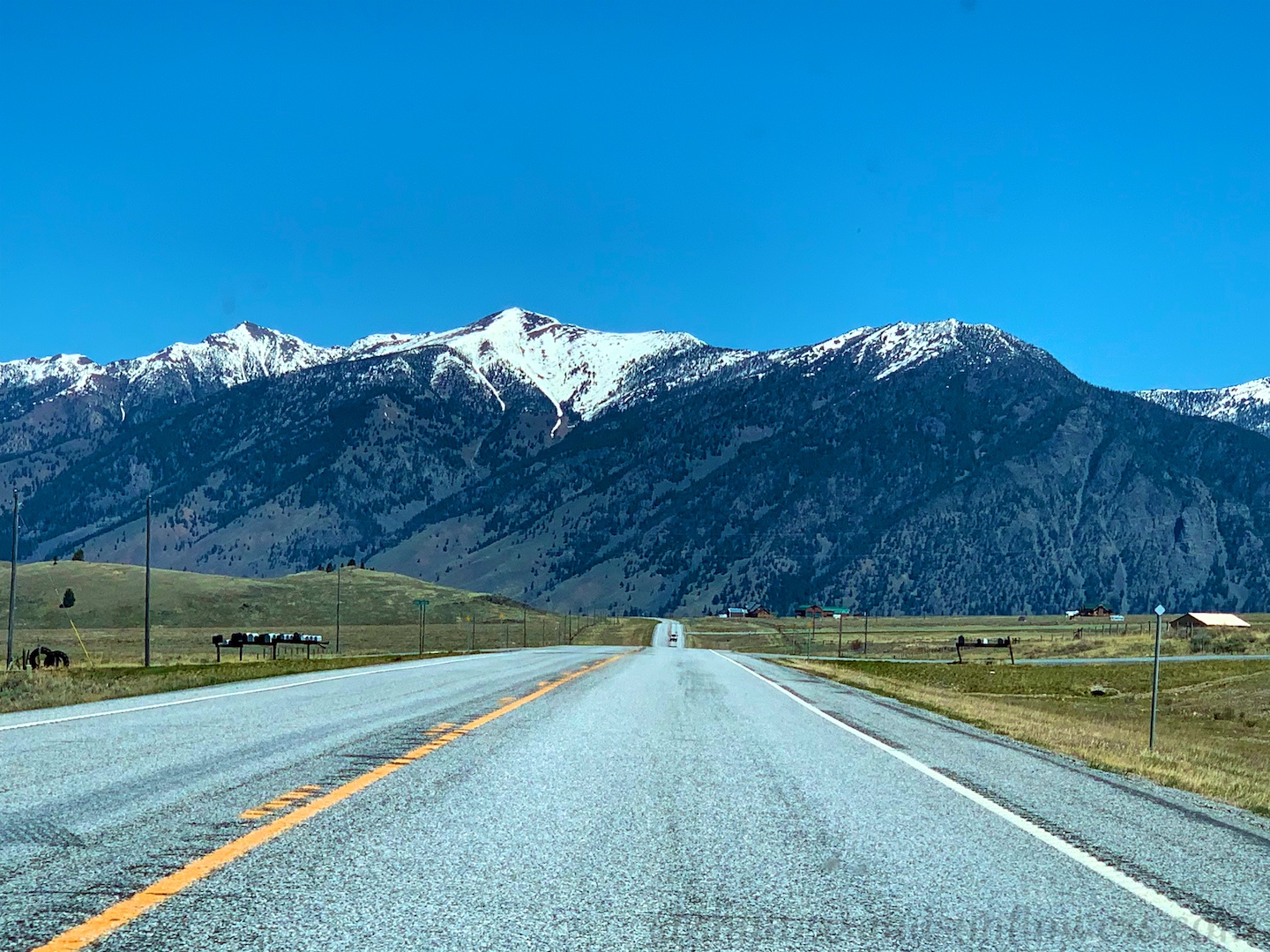 Ennis was a charming western town where we stopped for lunch. Delicious food and delicious people, if people can be described as such, warm and inviting! 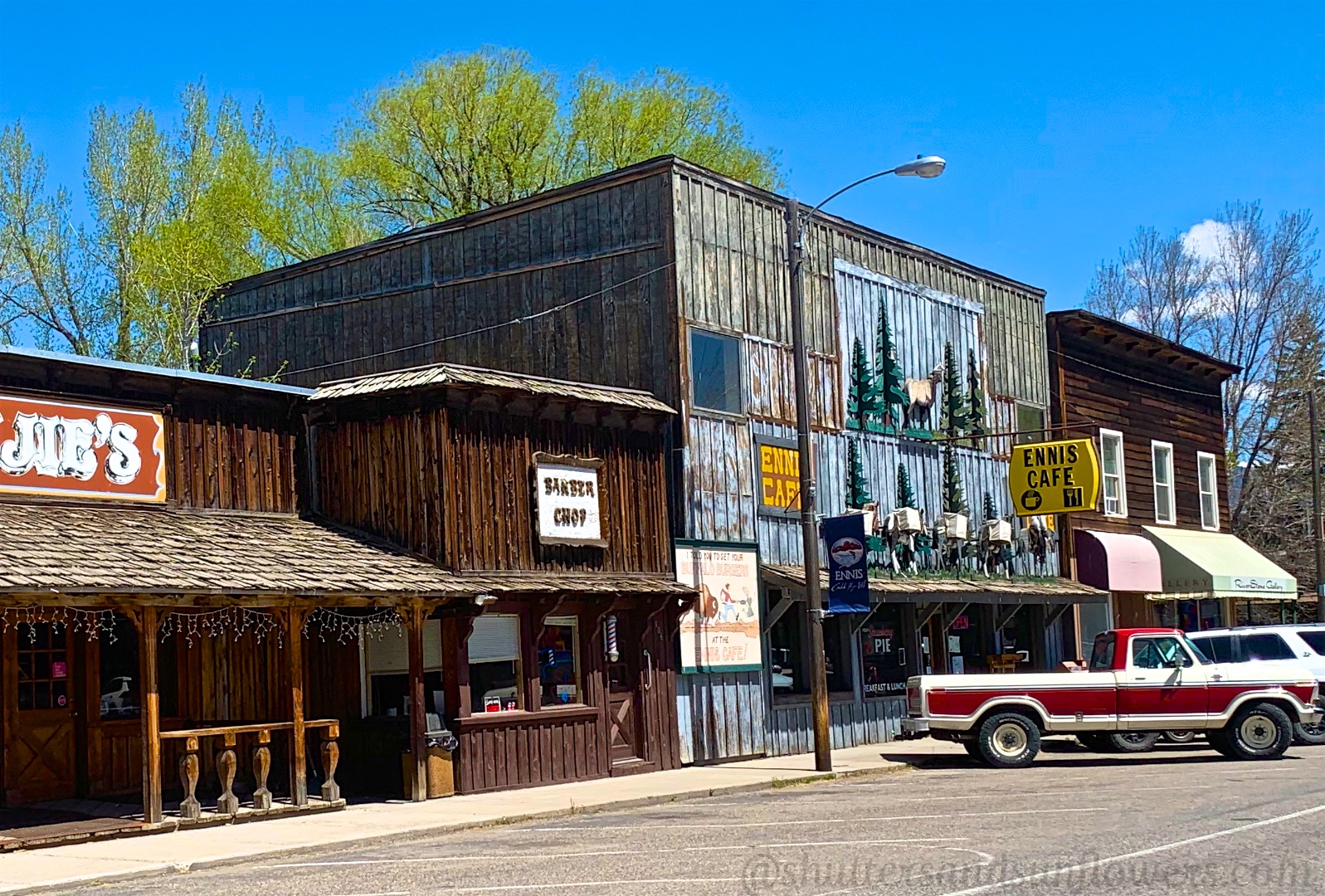 After Ennis we climbed up onto Highway ‘287’ arriving in the nearby historic cowboy towns, which we had no idea were even there! 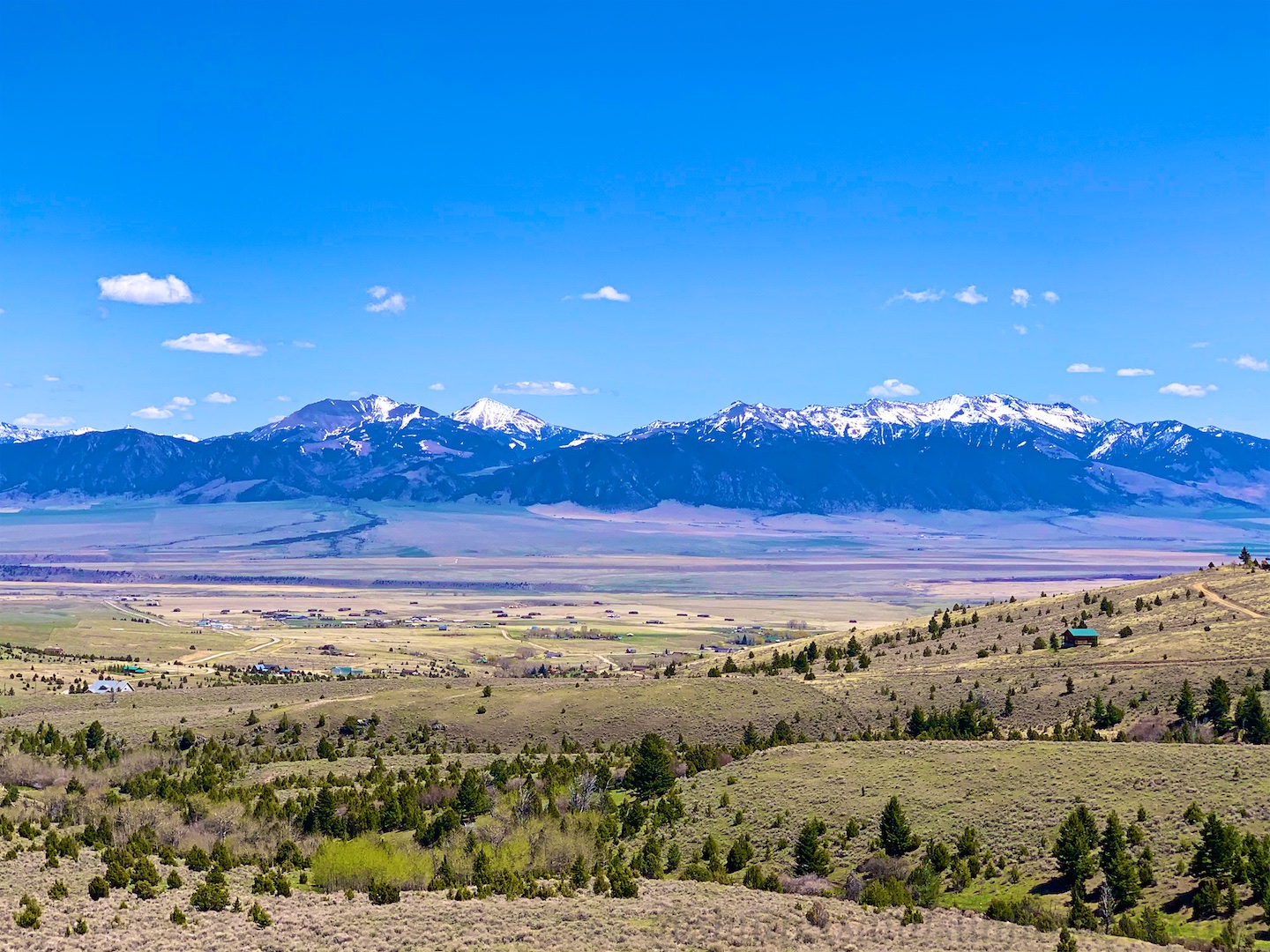 This old western town is a living tribute monument to the bygone era when it was first settled. 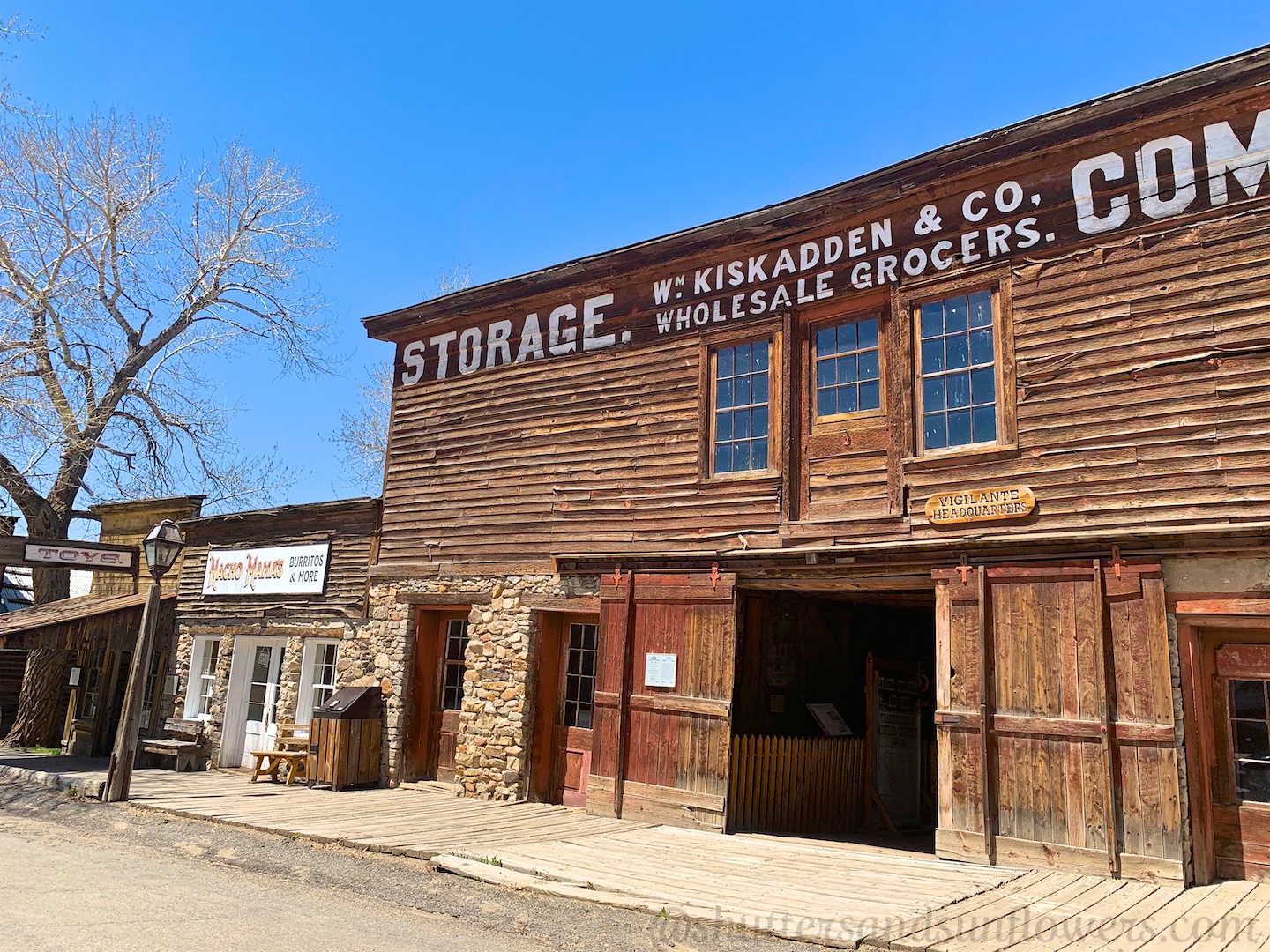 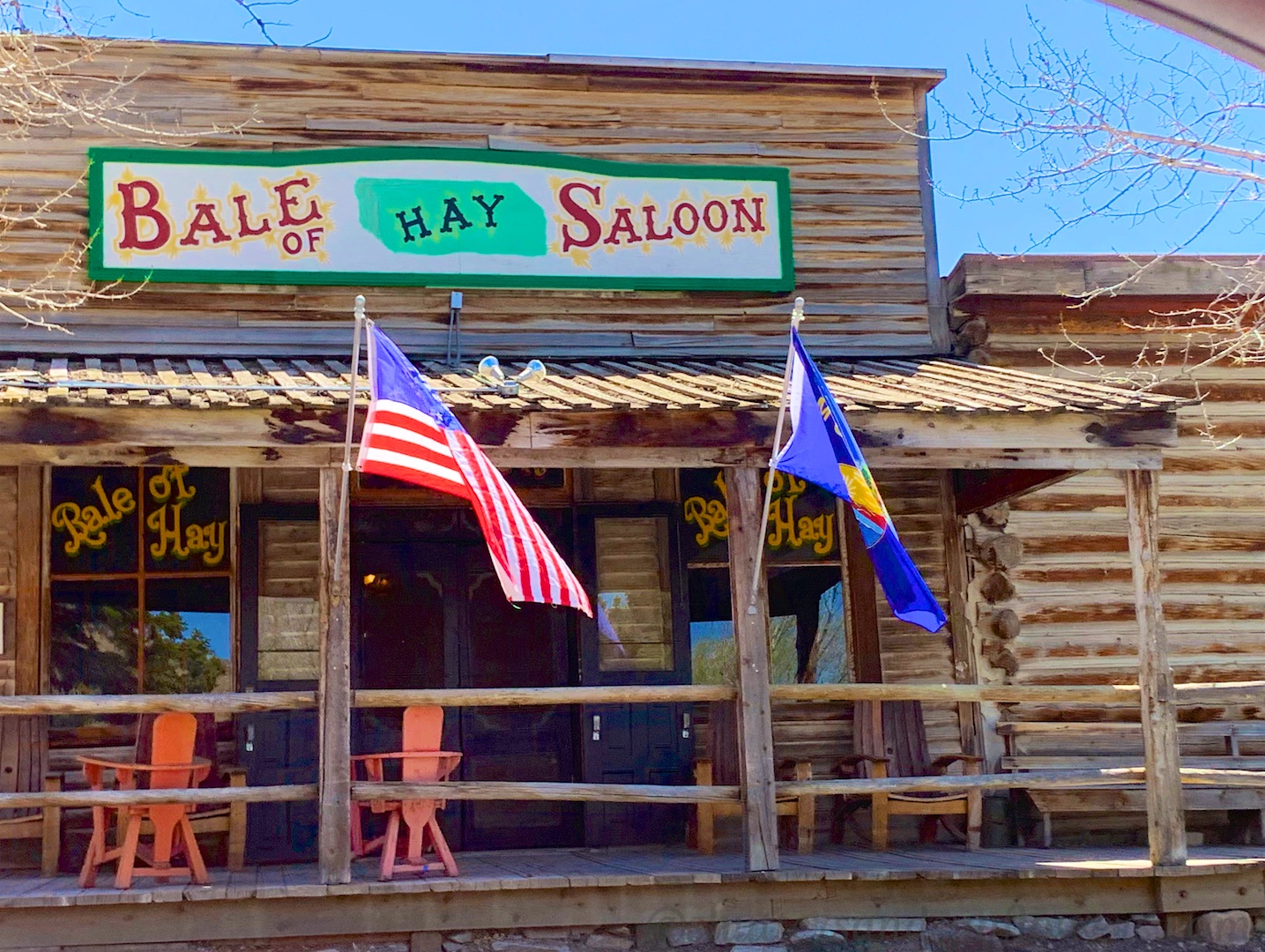 All that was missing were the cowboys, there were plenty of rails to tie up the horses. 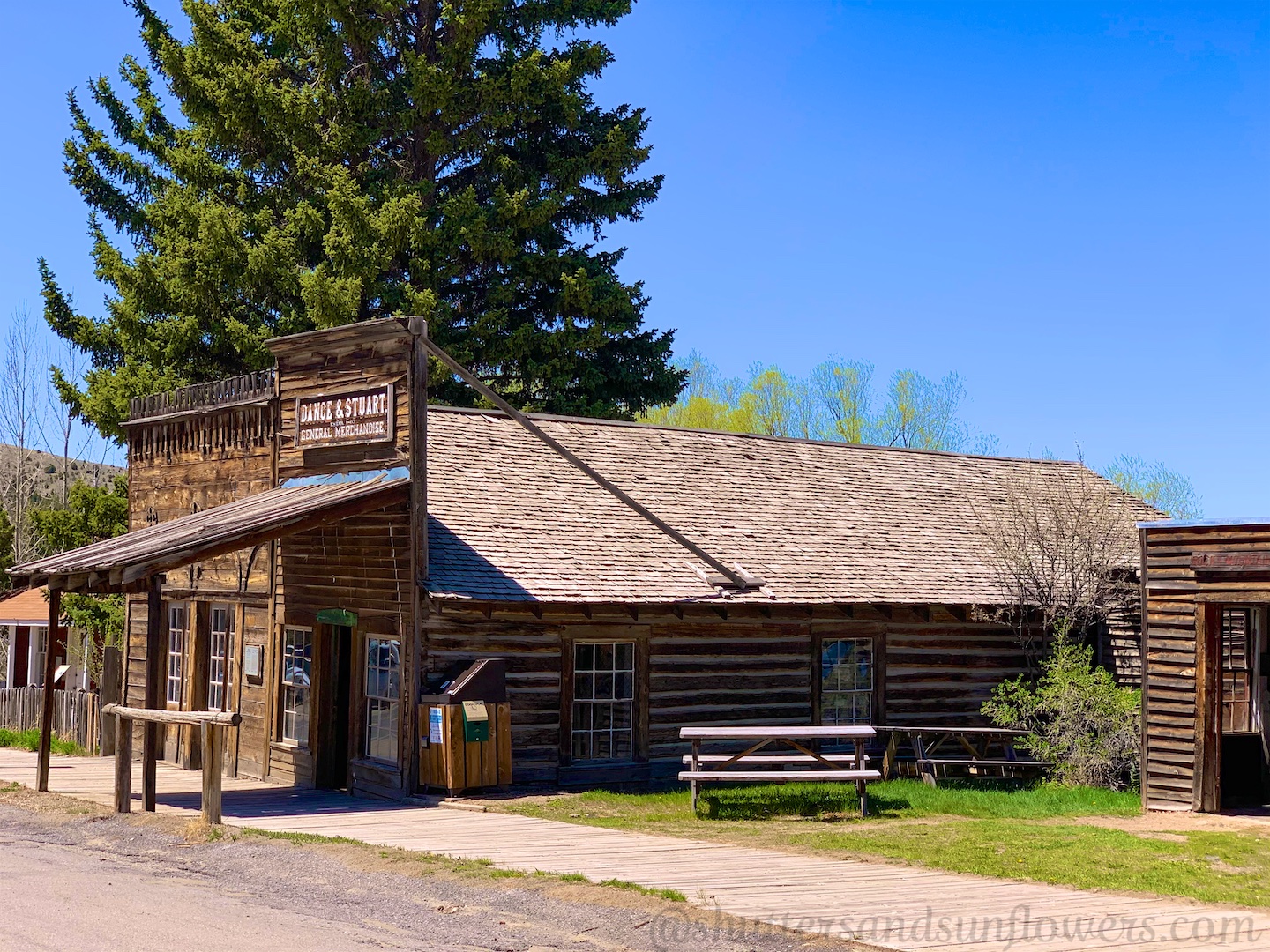 A cabin by the Big Hole River

Our destination was our friend’s beautiful cabin by the river across the other side of the railway tracks. 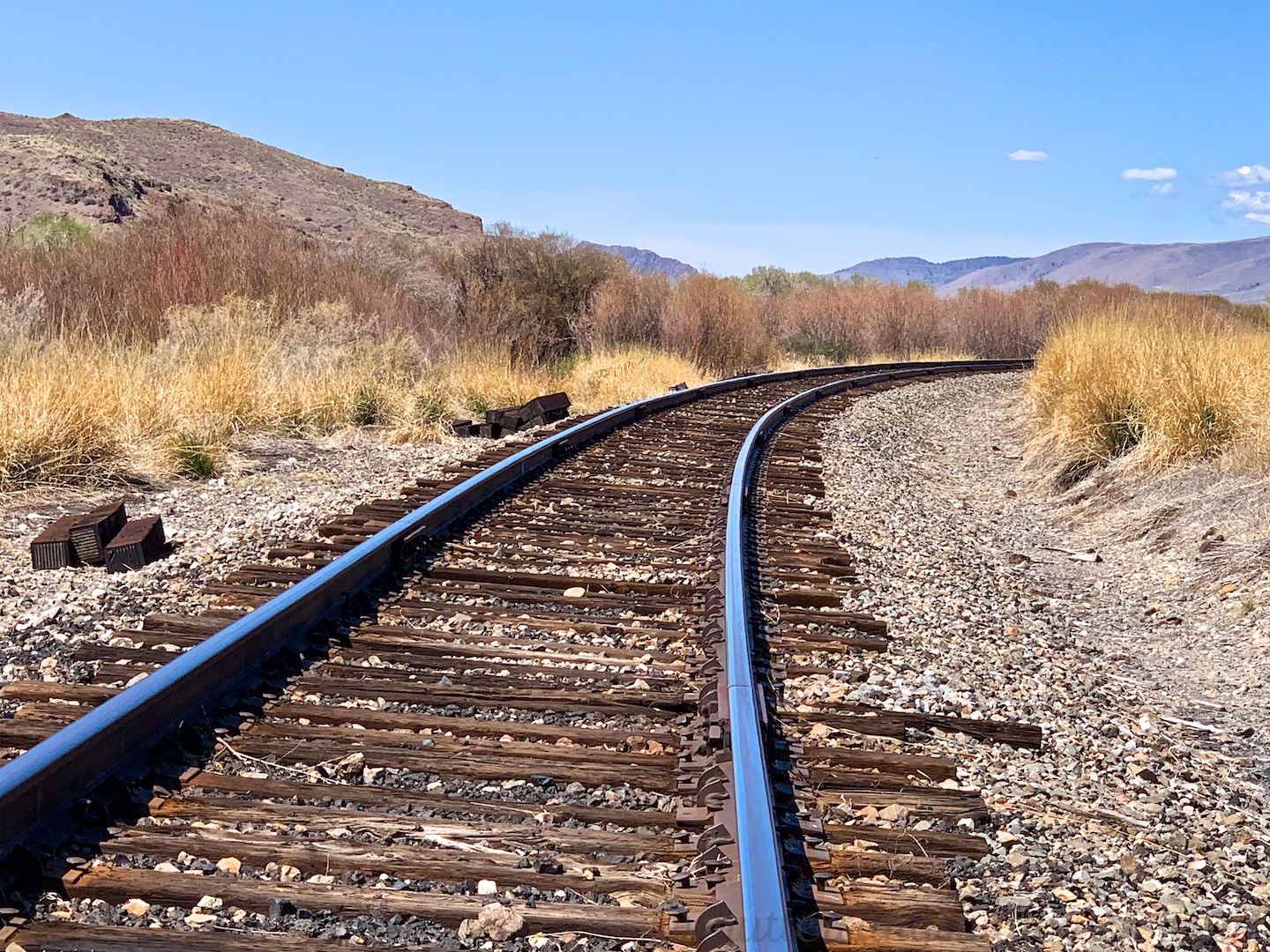 Stretching into the distance they reminded me of the 1950’s children’s TV show about a western train driver, ‘Casey Jones’, I used to love as a small child.

And then we were there. 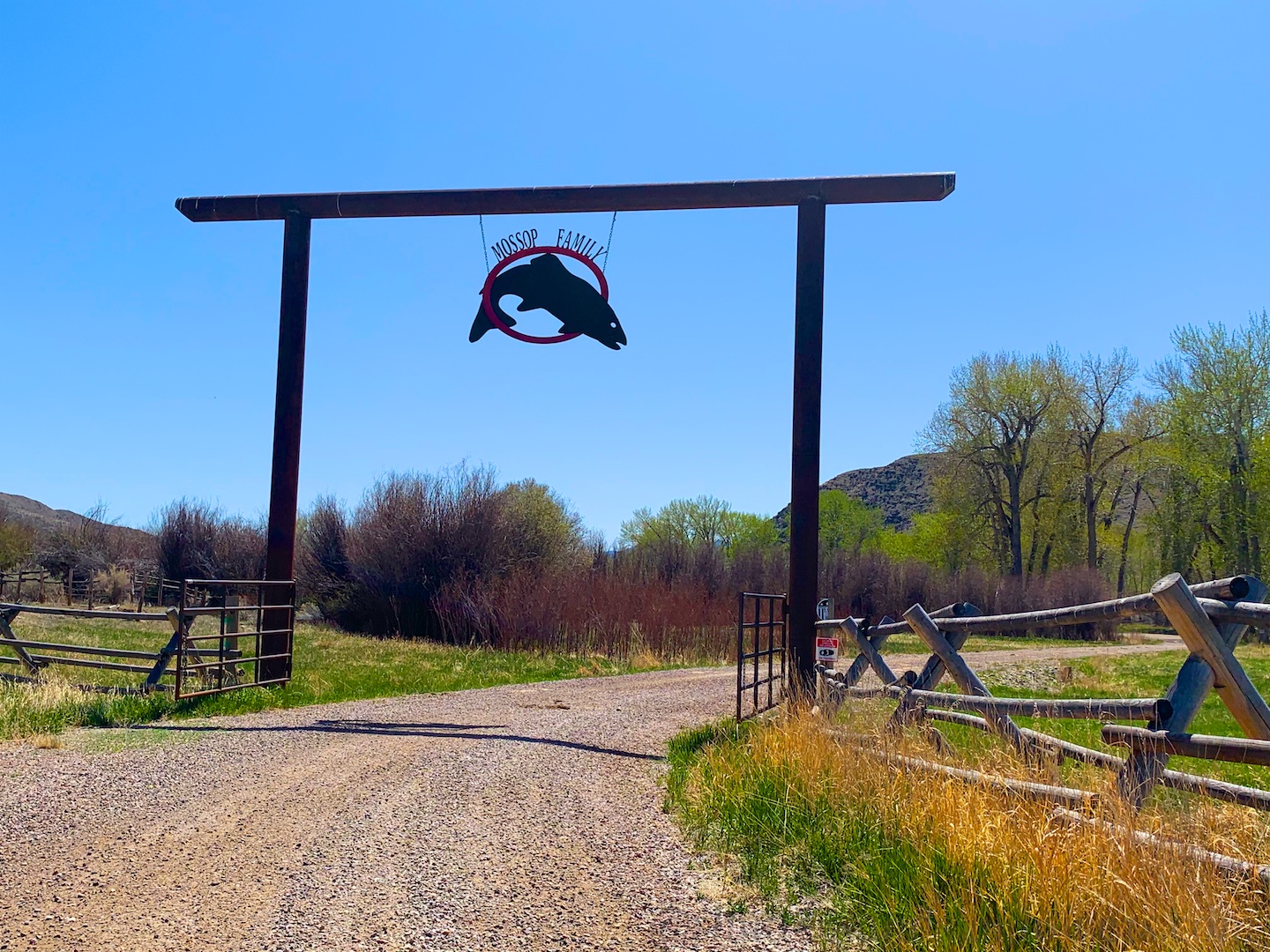 Our luxurious resting place for the next few nights with our dear friends, by the Big Hole River, a few miles from the tiny little hamlet of Melrose, Montana. With a view to die for! 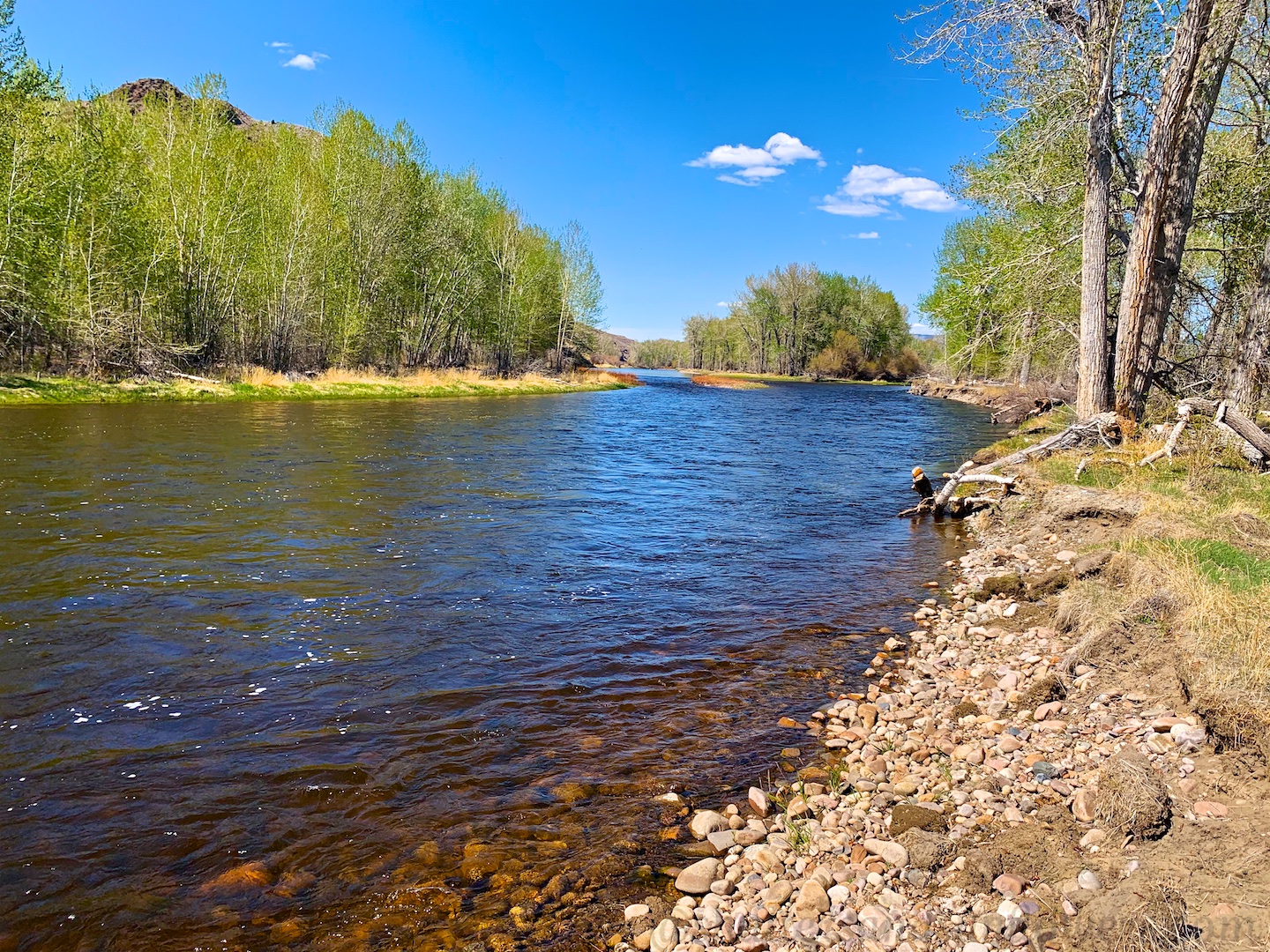 Watching the sun dip down over the Big Hole River I thought about the last few days. The ski slopes of Deer Valley and majestic peaks of the Grand Tetons. I hope you get to visit them. And then there’s Yellowstone….. 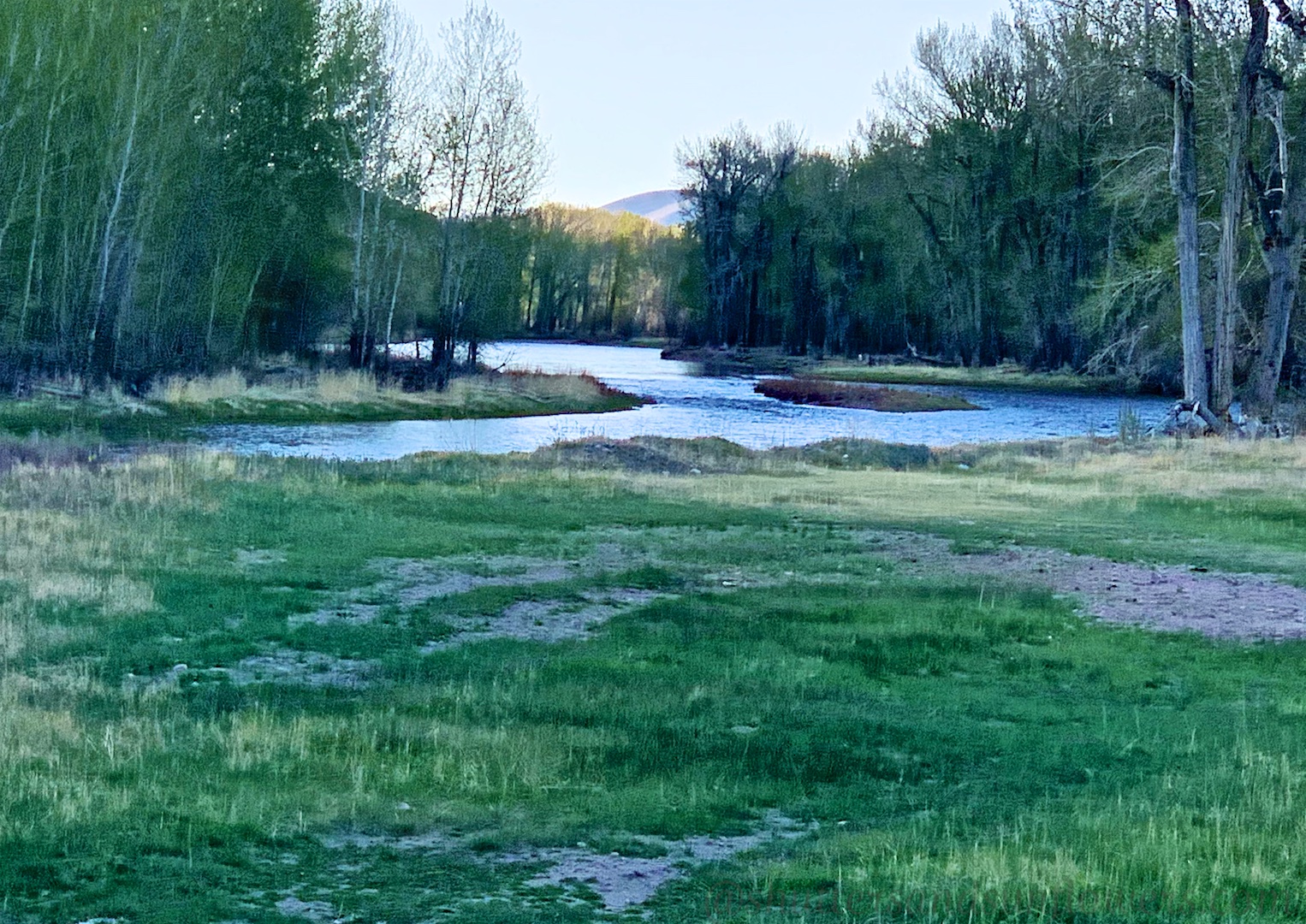 Yellowstone is truly one of the most phenomenal places on earth. A living and vibrant testament to the miraculous and often inexplicable forces of Mother Nature. It’s that special somewhere that leaves its footprint in your soul creating memories you’ll cherish in your heart forever.