Munich without the beer festival!

Munich, Germany a beautiful city, well presented and orderly. One is struck by affluence, quality and the warmth and friendliness of the people. Rich in history, destroyed by fire, plague and the ravages of war over the centuries, Munich has endured and thrived within the enfolds of the stunning Bavaria region of Germany.
Marienplatz, the city’s focal point is dominated by the  New Town Hall, Neues Rathaus. The monumental, 79 meters high town hall was built between 1867 and 1909 by Georg Joseph Hauberrisser in Flemish, Gothic style to alleviate the overcrowded Old Town Hall (Altes Rathaus) nearby. 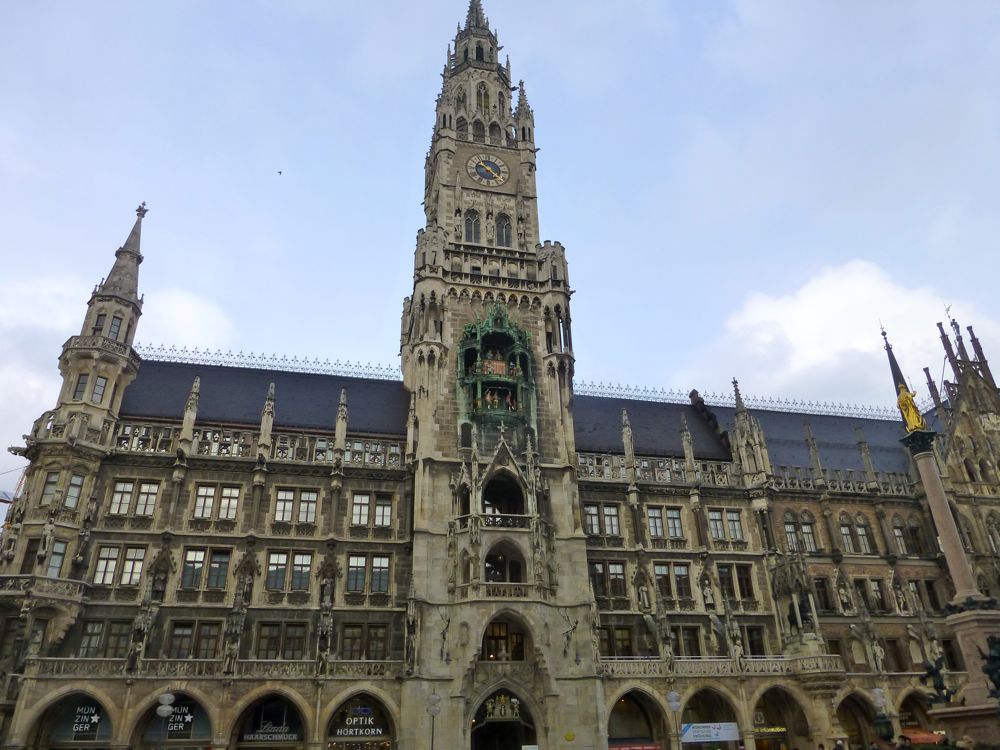 The original town hall  Altes Rathaus was completely destroyed by fire in 1460. Between 1470 and 1480, it was rebuilt but was destroyed again during the Second World War. Incredibly it was reconstructed once again after the war, following the original 15th century plans! 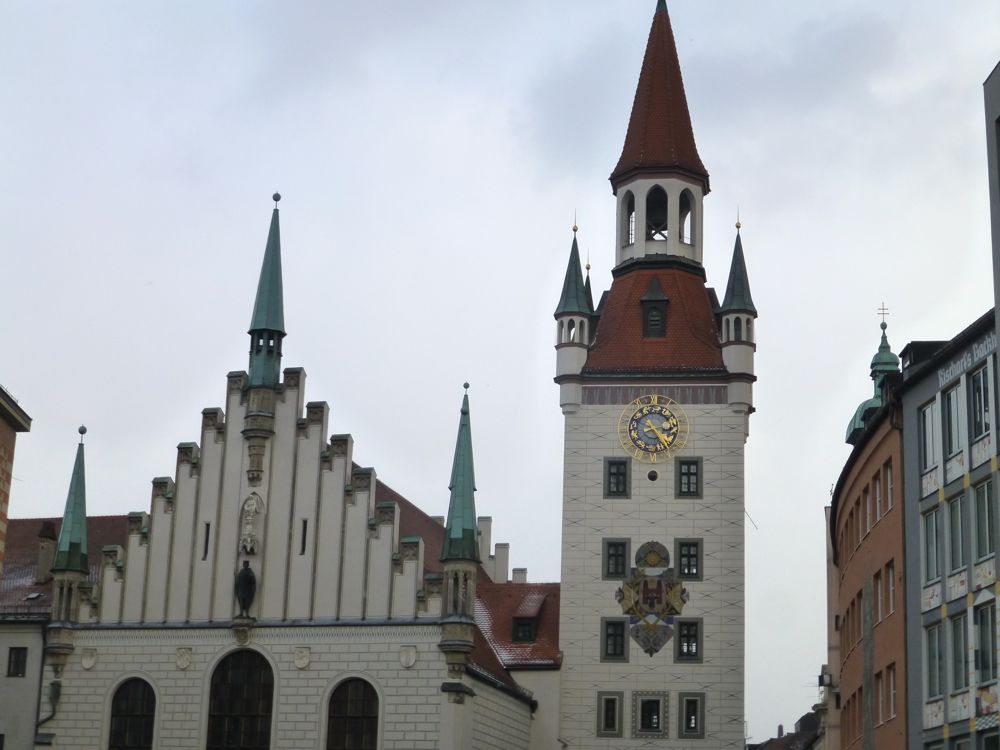 Around the corner from Marienplatz is Munich’s delicious and impressive, fresh produce market, Viktualienmarkt, victual being the Latin word for food. King Maximilian relocated the original market here from Marienplatz. Over the decades more and more halls have been added and separate pavilions for fish, fowl and other meats, flowers, produce, and bakery items. Viktualienmarkt was also severely damage during World War II. The modern Viktualienmarkt is a gourmet’s paradise boasting 140 shops and stalls offering flowers and plants, vegetables, exotic fruit, venison and poultry, eggs, butter, honey, fish, meat and sausages. It just makes you want to cook and prepare something tantalizing and invite friends over to eat!!
Cheese sellers at Viktualienmarkt 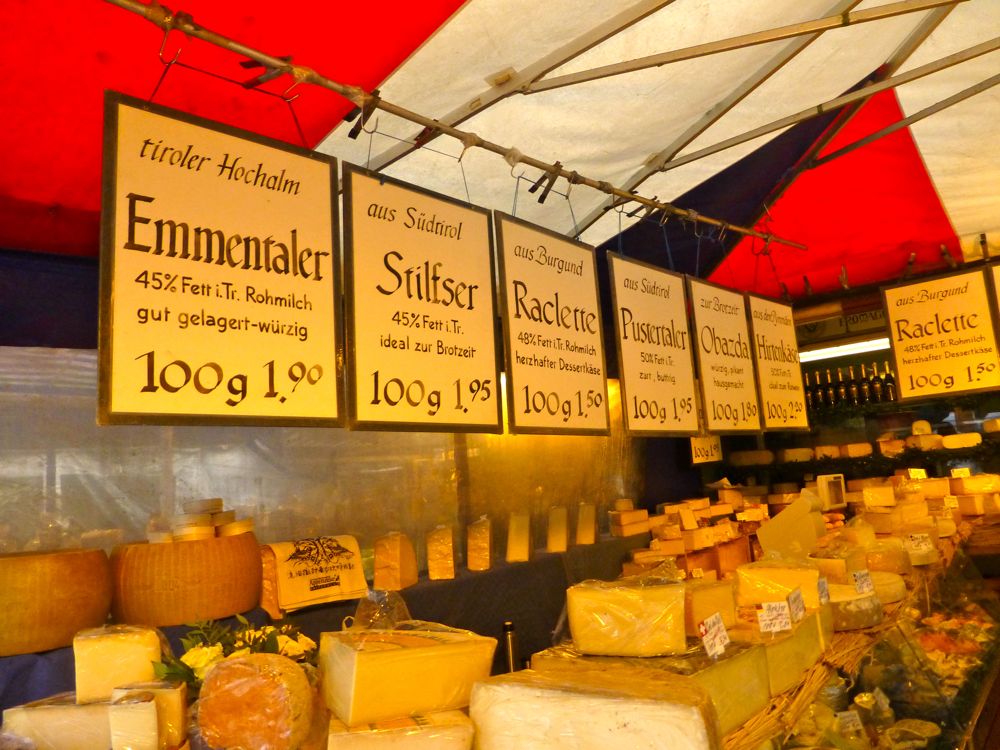 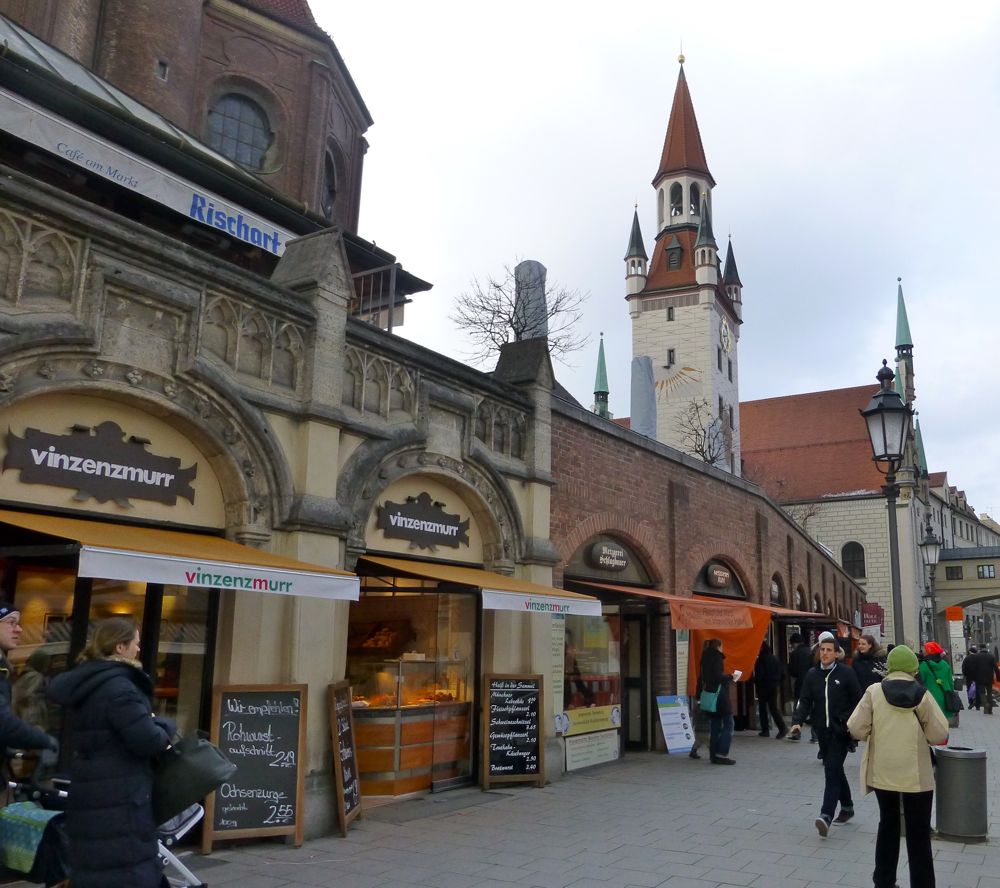 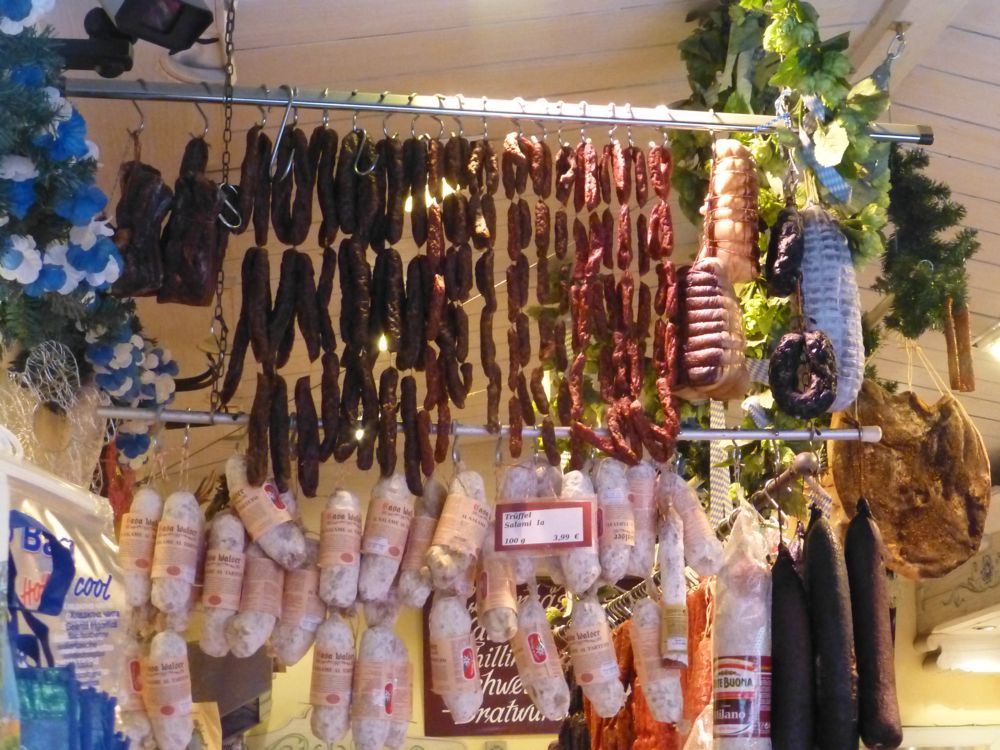 Easter ‘for sale’ at Viktualienmarkt! 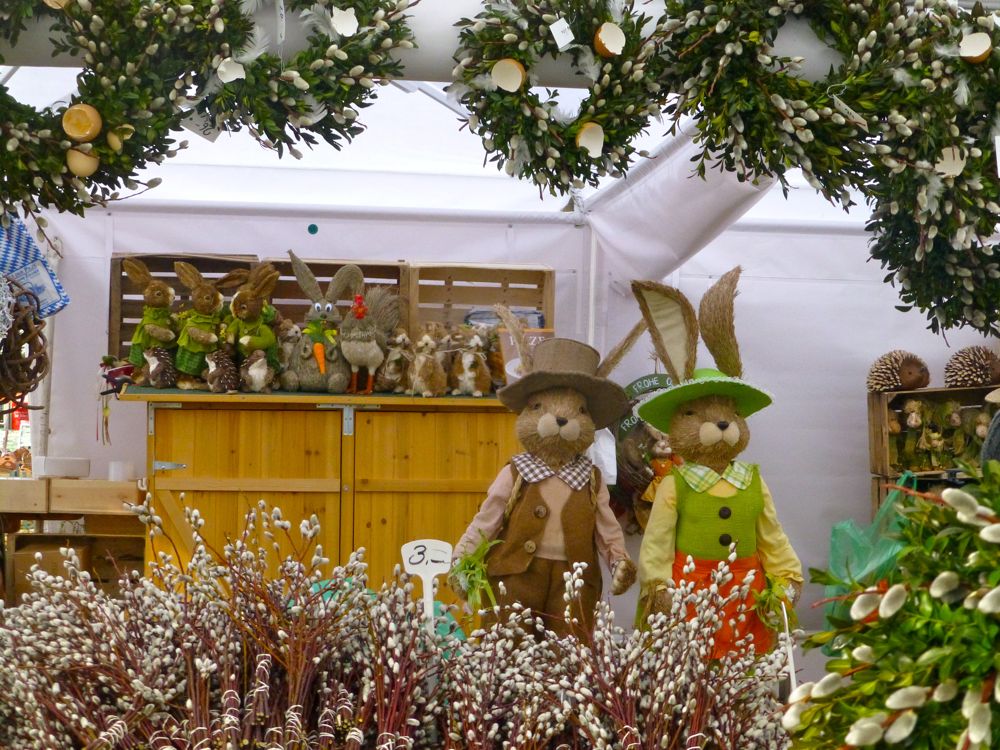 Pussy Willow ~ enticing big bundles and carefully crafted into wreaths of all sizes  ~ if only I hadn’t had a plane to catch! 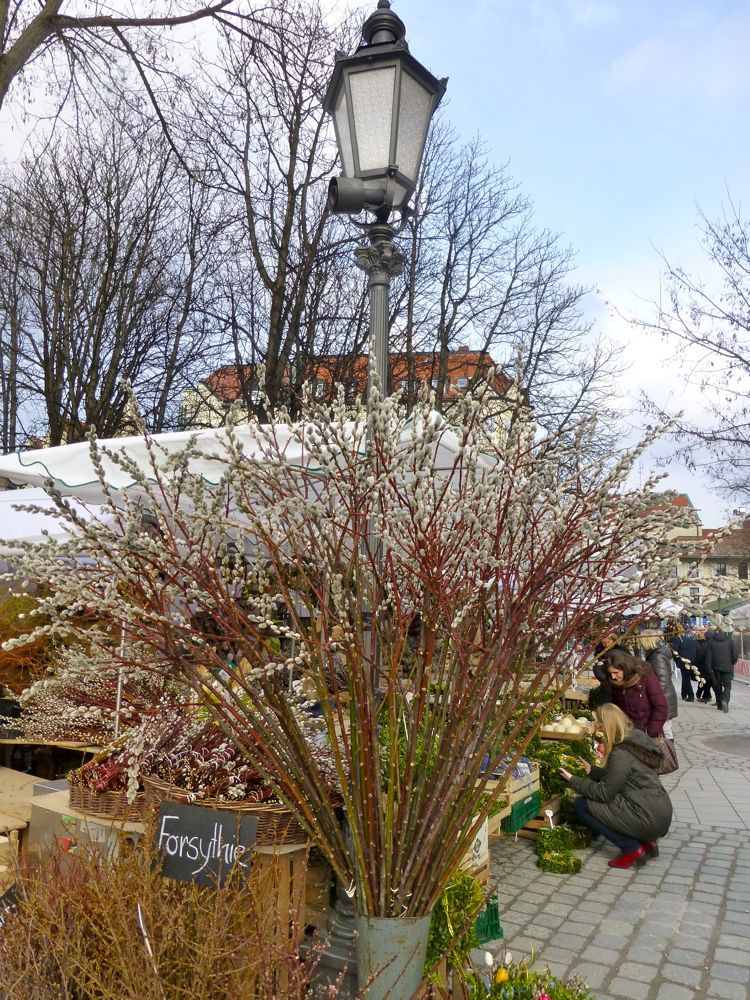 By the side of the Viktualienmarkt is the oldest church in Munich, Helilig Geist Kirche. It dates from the 13th century, when a hospice and a Romanesque chapel stood on its site After a fire destroyed them in 1327 a new hospice was built and the chapel was replaced with a Gothic church. In 1806 the hospice was torn down to make room for the Viktualienmarkt.
Helilig Geist Kirche 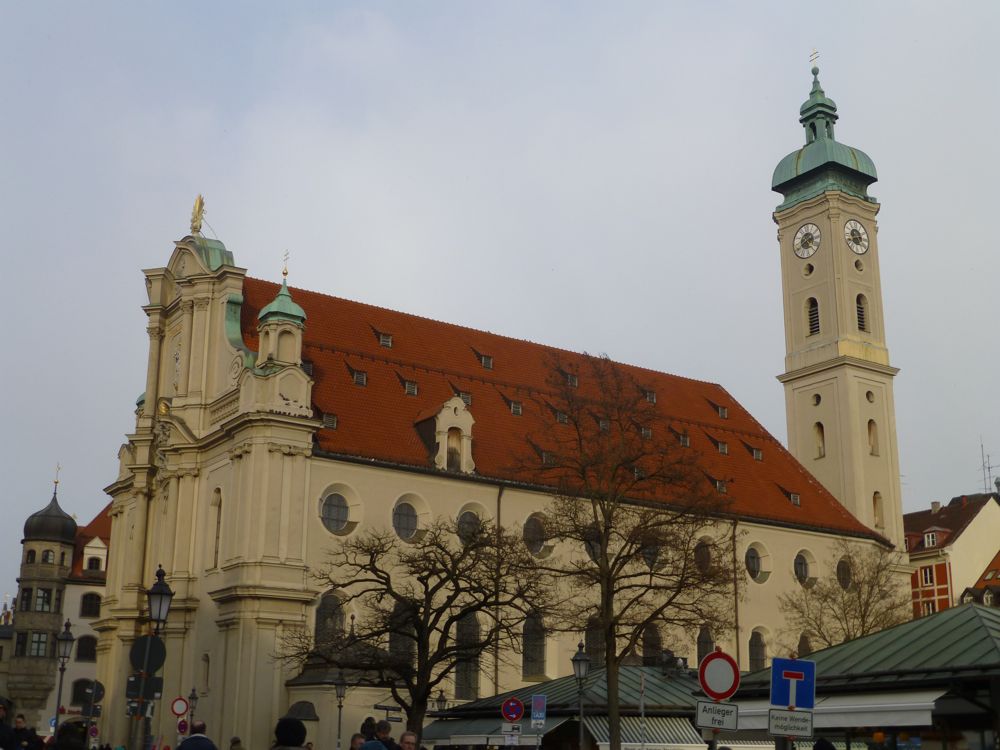 Max Joseph Platz
In the 1820s, King Ludwig I ordered his court architect, Von Klenze, to create another grand square, near the Residenz Palace. Grand buildings were constructed, along the north side a new annex for the Residenz, the Königsbau. On the east side he rebuilt the opera house and added a monumental neoclassical façade. On the south side von Klenze erected the Törring-Jettenbach Palace, now the Palais an der Opera. 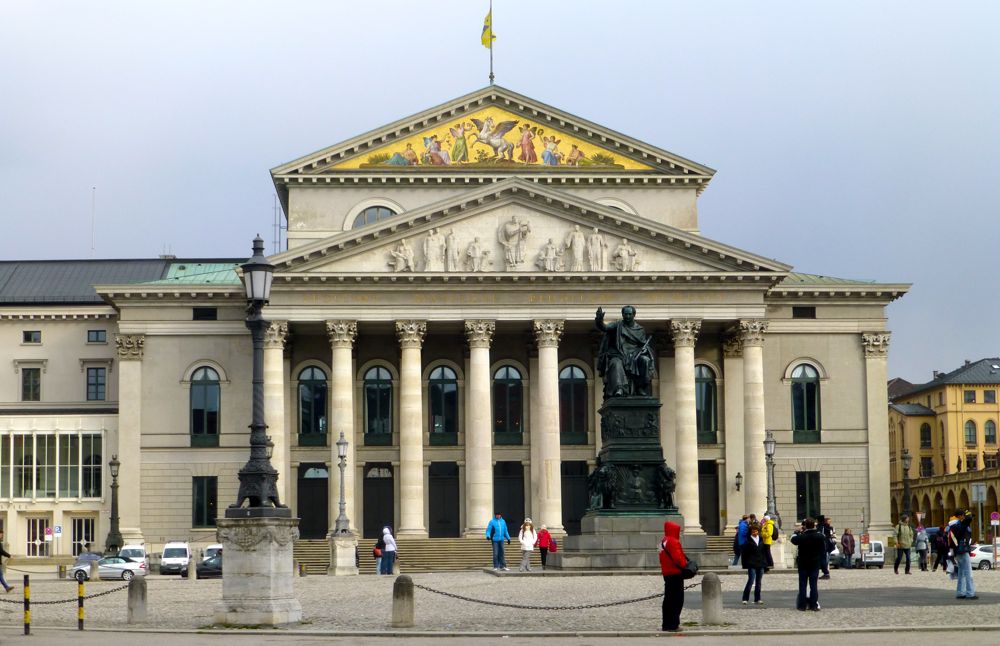 There is much more to see, many more squares and historic buildings, the BMW factory and museum, palaces, restaurants and gardens, stunning Bavarian countryside and of course lots of beer, especially in October, we will return!! 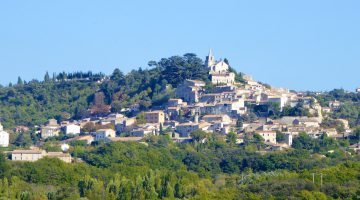 Exploring the Luberon from Lourmarin