A visit to any one of the spectacular outdoor museums, which are America’s breathtaking National Parks, always fills me with wonder. The grandeur and magnificence of nature laid out before you to stare and marvel at. Our recent trip to California’s Sequoia National Park, America’s second oldest National Park, reminded me of just how miraculous nature is. Towering Sequoia trees, crisp, air fragrant with pine, mountainous views reaching into the sky and stretching far into the horizon. Imposing granite rock faces dominating all around them, challenging the most intrepid to conquer them. For over 125 years this incredible park system has worked tirelessly to preserve and maintain these natural phenomena for the millions who come annually from all across the globe, simply asking of them ‘to take only memories and leave only footprints’.
On route to Sequoia National park, the Freeways through California’s Central Valley, often called the produce garden of America, were lined with oleanders reminding us of the Autoroutes du sud de la France, especially on the A8 towards Nice, how far away we were from there.
Miles of orchards and fields of lush crops gave way to vines as we became closer to the Sierras.

A Central Valley Farmstead just outside the entrance to the park. 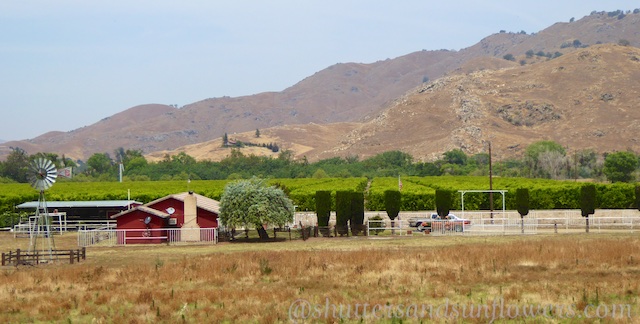 Lake Kaweah, its’ water kissed by the colours of the sky

The Entrance to Sequoia National Park, founded in 1890. Many of its breathtaking natural wonders were explored and logged by the naturalist John Muir. 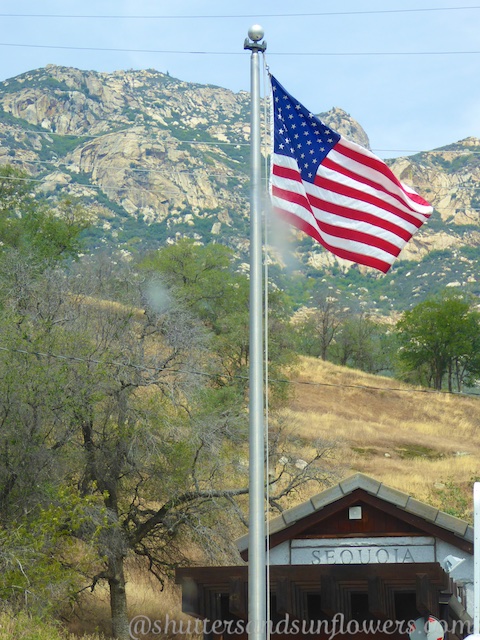 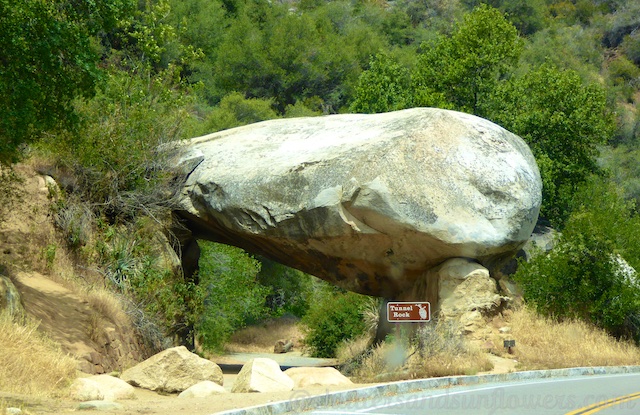 Climbing up through the park through its snaking hair pin bends we were reminded again of the South of France and driving though the Tarn Valley. 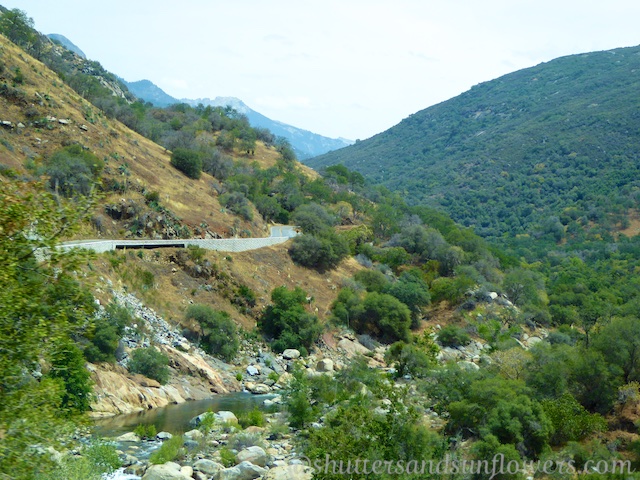 We ascended to over eight thousand feet, each side of the road flanked by spectacular views. 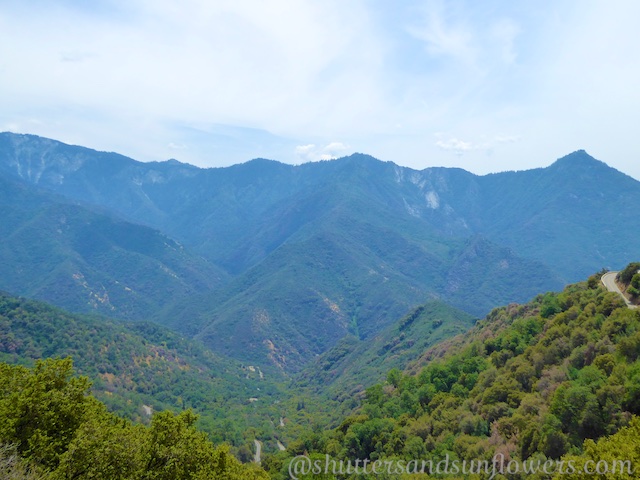 Dominating the horizon was Morro Rock, glimpses of it peeking through the tress on every twisting curve of the road. 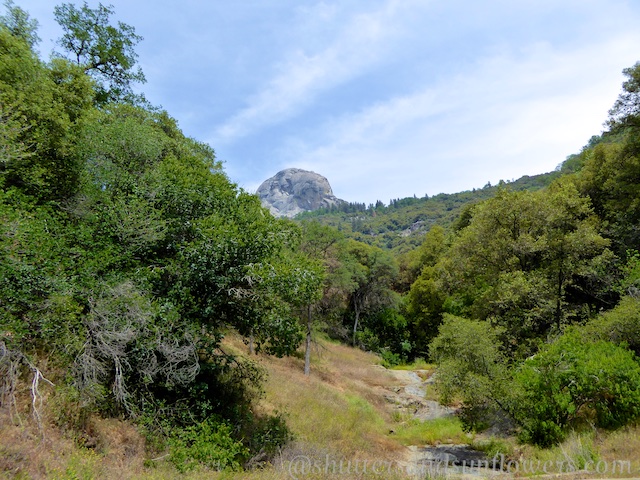 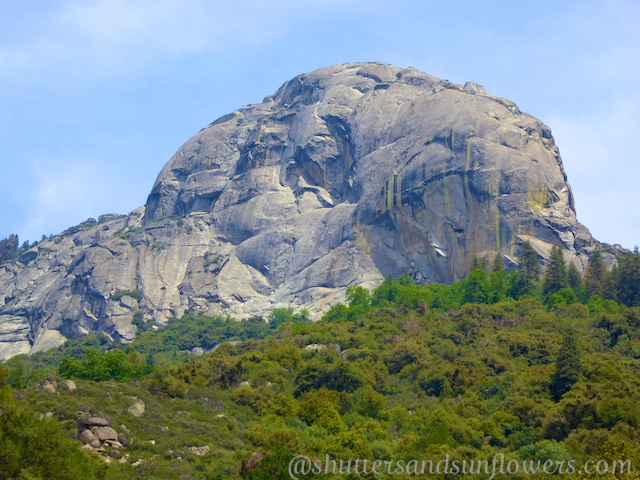 Finally we were driving through the Sequoia trees; I was reminded of the words of Ralph Waldo Emerson “In the woods too a man casts off his years…& at what period so ever of life, is always a child. In the woods is perpetual youth.” 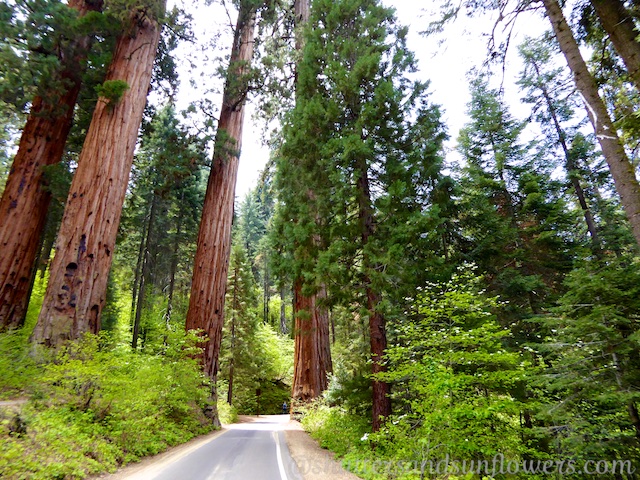 The sheer size of these majestic trees was breathtaking. 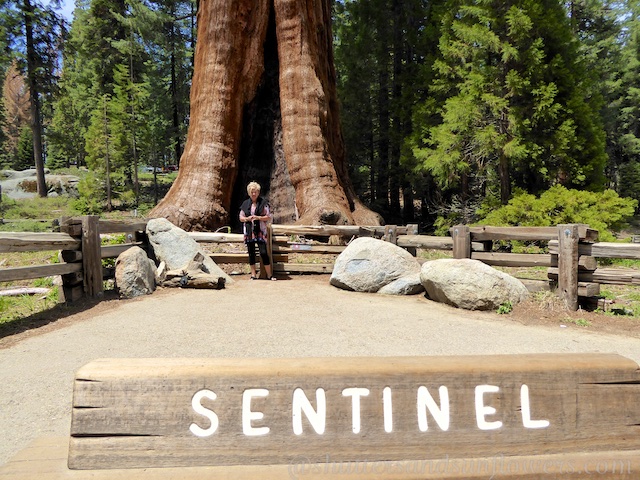 The Giant Forest Museum, provided a perspective of their size. 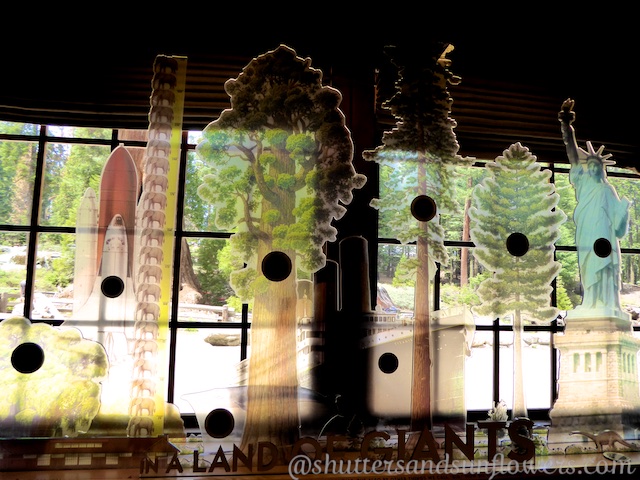 We then visited the jewel of this forest, the 2,200 year old ‘General Sherman’, a name bestowed upon it by naturalist James Wolverton, who had served as a lieutenant in the 9th Indiana Cavalry under General William Tecumseh Sherman in the Civil War.
These concentric slabs represent the size of its girth, about 109 feet (33m) 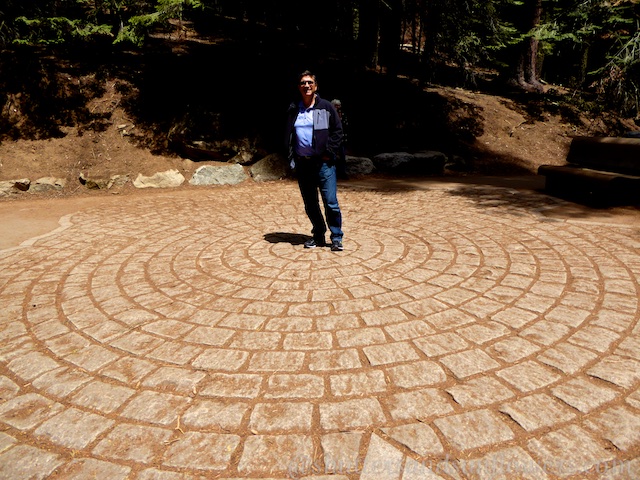 General Sherman is the largest tree in the world, not by height but by the vast volume of its trunk, 52 500 cubic feet (1487 cubic meters). Interestingly it is actually dead at the top but each year its trunk continues to increase. It is estimated to weigh 1385 tons. If it were filled with water there would be enough to fill 9844 baths!! 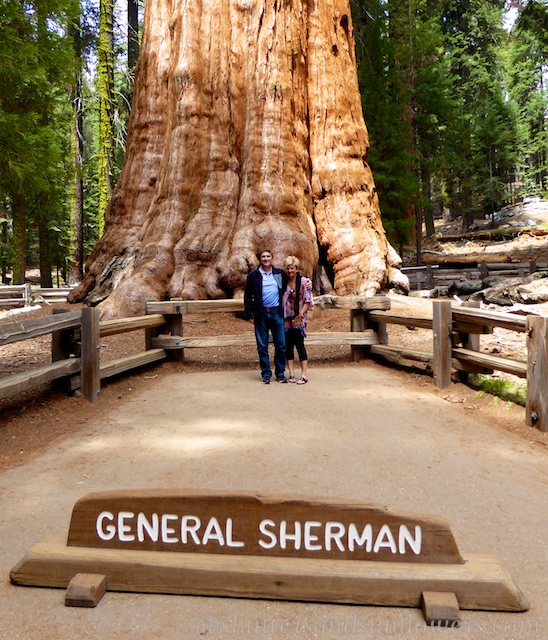 Its uneven shape and gnarly furrows is caused by natural growth and fire scars. 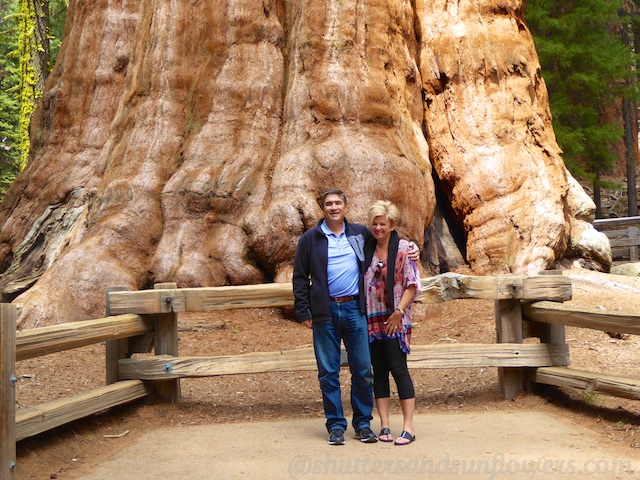 Standing beside this mighty child of nature one feels almost insignificant as it towers 275 feet above you. 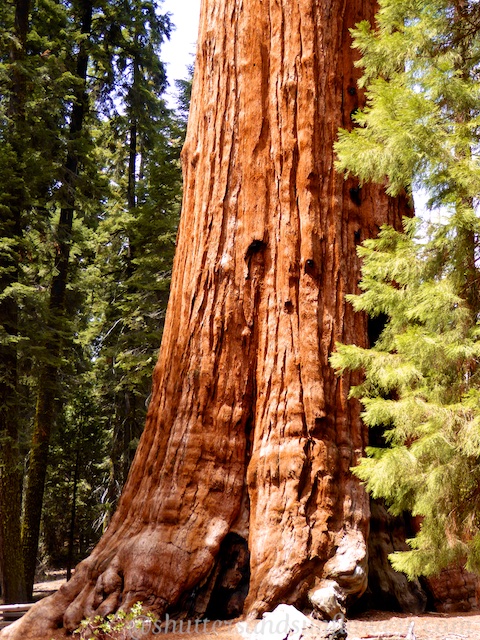 We continued our journey reaching over 8000 feet and at last were afforded views of neighbouring Kings Canyon National Park. “The air up there …..is very pure and fine, bracing and delicious. And why shouldn’t it be? It’s the same the angels breathe” Mark Twain 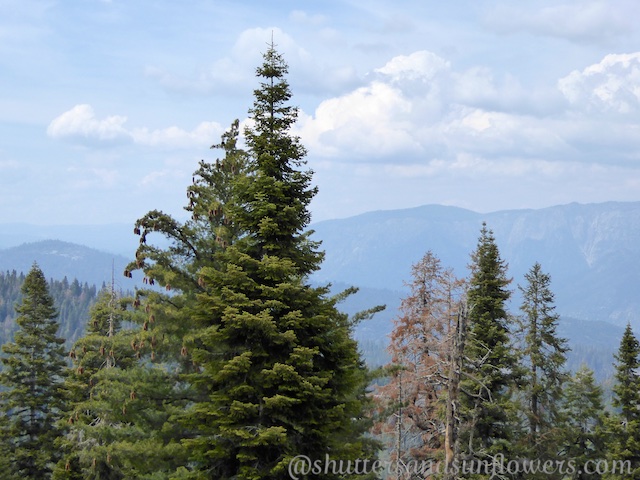 We left this magical place heading west then north for home, back by the vineyards of the Central Valley, near Fresno. 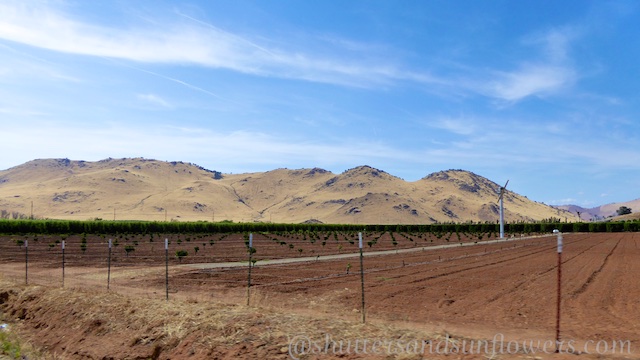 The images of the Sequoias will remain in our hearts for ever. “The real significance of wilderness is a cultural matter. It is far more than hunting, fishing, hiking camping or canoeing: it has to do with the human spirit” Sigurd F. Olson 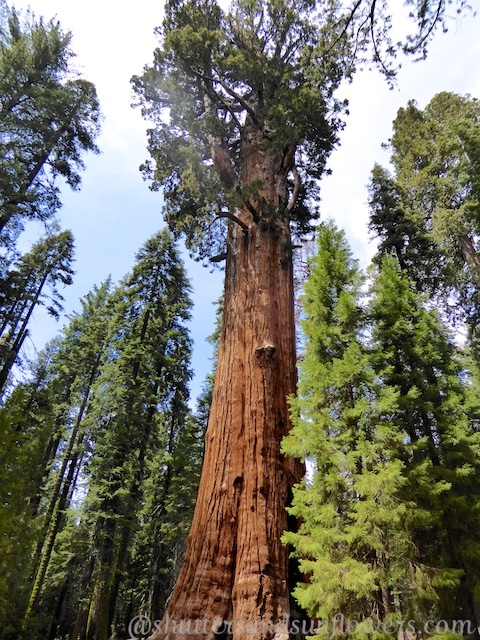 Where to find Sequoia National Park

Next post The charming town and sumptuous vineyards of Bandol, Provence 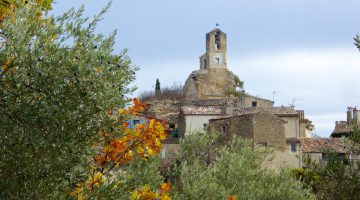