The magical light of Provence, in Lourmarin

For centuries artists have flocked to Provence, in part for its beautiful setting and scenery but also because of its light. That transcendent quality like no where else, a clarity that sharply defines everything yet at the same time has the ability to create an almost translucent effect. The sun’s rays stream illuminating orbs to dance across the golden, honeyed architecture, intensifying their colour and warmth, dappling the cobble stones and enhancing the natural ,mystical ambience of this captivating part of the world. Despite a biting February chill where the crisp, fresh air makes your cheeks glow, by early afternoon the sun has poured its warmth like a soft blanket over every unshaded corner. It allows you to bask outside in its glow, to sip a café crème and absorb the intoxicating atmosphere, and delight in the mere fact of being here. 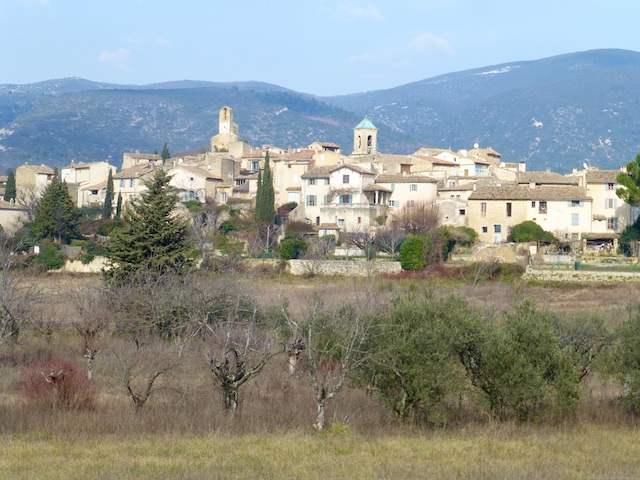 This view, ever changing with the season, one I have so often marveled at, imprinted upon my memory like a cherished friend and here I am again gazing upon it in renewed wonder. Under a dusky, February sky, in the last hours of daylight the stone buildings appear a pale, milky cream. The bold brightness of summer long since faded, it’s as if a translucent grey veil has been gently laid over the scene. Framed above by two different shades of blue; a watery sky and the surrounding hills and below by a wintry skirt of sleeping, gnarly vines and fruit trees. 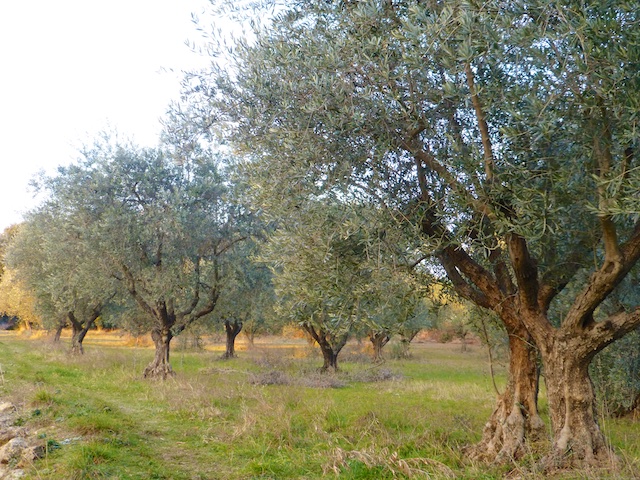 In contrast the olive trees maintain a serene constancy in their attire, a soft shade of silvery green occasionally glistening as the sunlight dances over them. 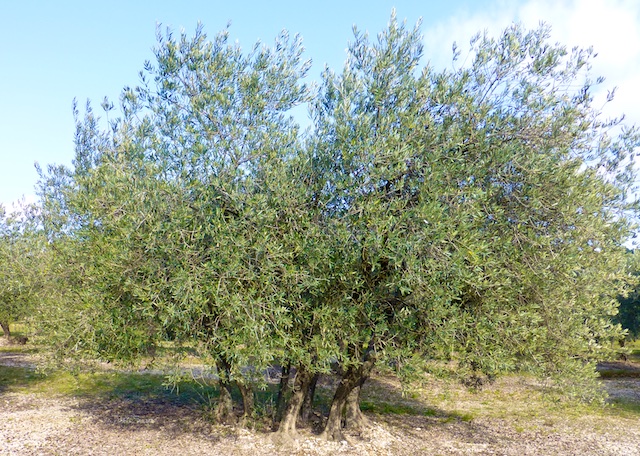 All carefully trimmed to the same height and shape, these ancient trees sit like dancers about to take the stage waiting in varying poses, some just on one twisted ‘leg’ others on several. 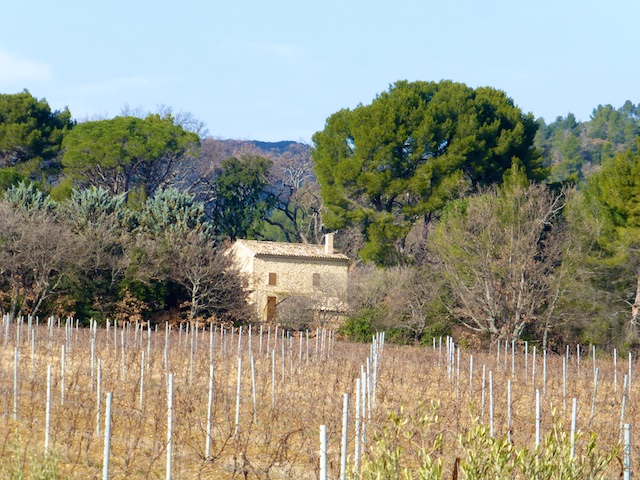 How the scenery is altered depending on where the sun has chosen to smile. Over the dormant vines, reaching across to the small Mas, set against the Luberon hills, the colours regain their strength and vibrancy. 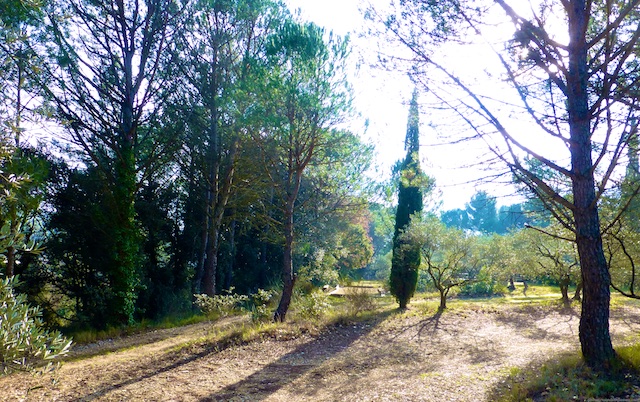 Yet just opposite the shadows are cast into long ghost like fingers, the blue sky faded to a silvery white, only the olive trees, bestowed with sunlight remain unchanged 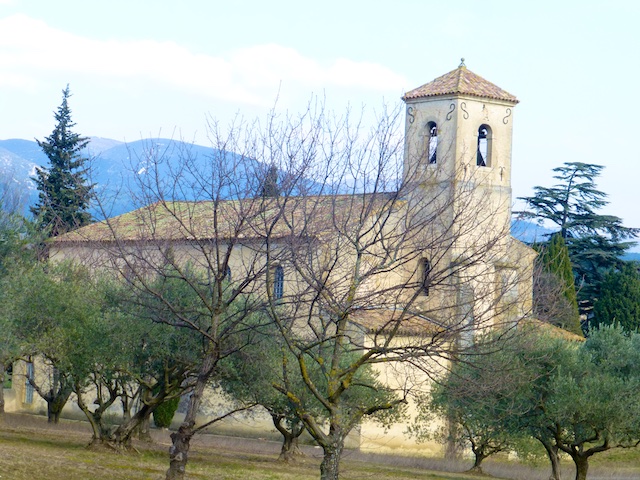 Lourmarin’s church, guarded by the olive trees, lies unaltered throughout the season’s cycle, just more visible in winter behind the spindly arms of the fruit trees. 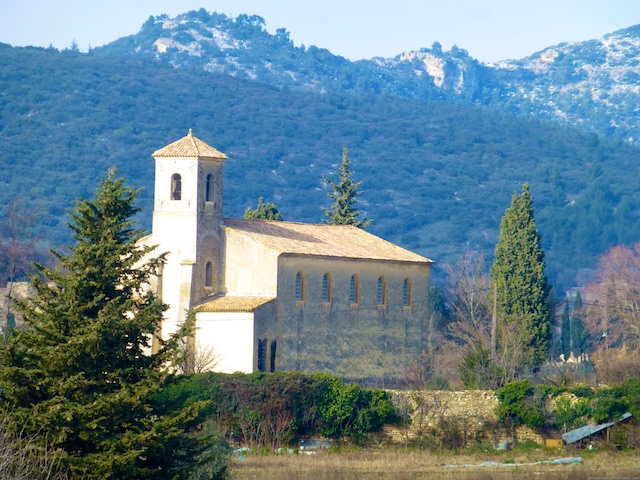 Seen from a different aspect, the church almost appears alone, not within the embrace of a village, as if remotely set upon an alpine hillside with only the wilds of nature for its companions. 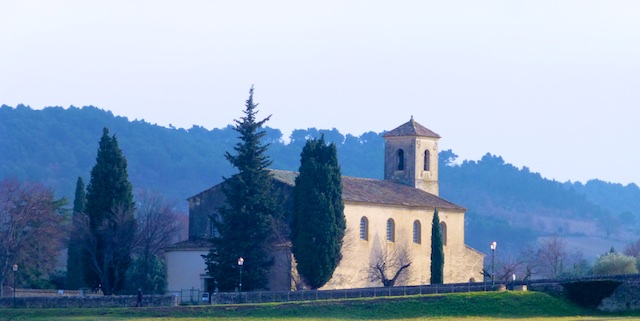 Within just half an hour, the dusk rapidly descending, the magic of the changing light creates yet a different aura as an almost pinky glow sweeps over the churches walls.

Provencal light, somehow different from anywhere else. It’s magical qualities illuminate this stunning region in a ever changing kaleidoscope. Its clarity seeps into your soul making you part of it whilst you are there, creating an indelible memory when you are not.

Download the printable The Lourmarin Travel Guide to learn more about this beautiful region
Do let me know your recommendations !

Previous Article The miracle of a plane journey 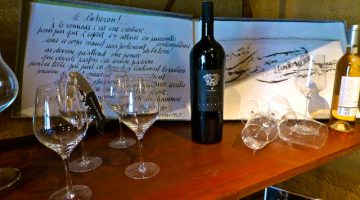 ‘Sunshine in my glass’ a Luberon wine tour