On June 5th 1944, with the world spinning on its axis, General Dwight Eisenhower addressed 1430 American paratroopers, from Greenham Common, England. “The eyes of the world are upon you.”  He announced, watching at just before midnight, as at 11 second intervals, eighty one C-47 Dakotas took off for Normandy to participate in one of the most decisive events of World War II, D-DAY.

Eisenhower was sixty miles west of London at a United States Air Force (USAF) base on Greenham Common, a well established historical military site. In 1643, during the English Civil War, Oliver Cromwell’s men had waited there to stop the forces of King Charles I. In 1745, it was where five thousand troops prepared to quell an invading Scottish rebellion led by Bonnie Prince Charlie. In World War I, British tank troops had trained there and in March 1941 before America became involved in World War II, RAF Bomber Command was based there.

Greenham Common as an American World War II base

When the USAF arrived at Greenham in 1942 one of its lodges became the HQ for the 101st Airborne division and one of its manors, Bowden House, the HQ for USSAF 51st Troop Carrier Wing. It was from here that the invasion of North Africa was planned and where in 1944 Churchill, De Gaulle and Eisenhower planned the airborne element of the D-Day landings. 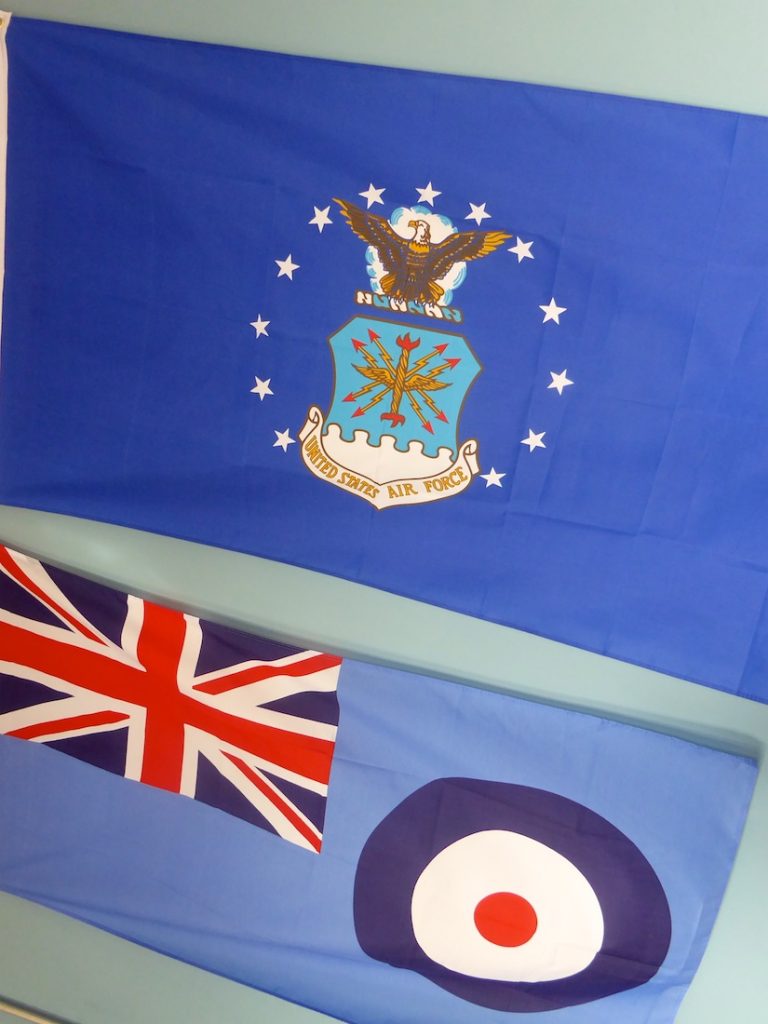 During the time the Americans were based at Greenham, it hosted several famous American stars who visited to entertain the troops. Bing Crosby, Betty Grable, Dorothy Lamour, Louis Armstrong and Glenn Miller were just some of it’s illustrious visitors.

It was also from here that my father, whose family home was a couple of miles away, first became acquainted with Americans. Servicemen, who according to my father’s teenage recollections, were all handsome and smartly dressed, happy to share their candy with ration deprived English children. It was the beginning of a life long respect and admiration for a country, that over fifty years later, would be where I would live.

Greenham Common is nestled next to the bustling market of town of Newbury where my parents met and to the south lies Watership Down, (immortalized in Richard Adam’s novel of the same name) where bunnies still hop. Close by is Highclere Castle, now world famous as the location for Downton Abbey.

Covering just over two square miles, resplendent with gorse, bracken and purple heather it was where as a child I was taken to pick blackberries and where a few days ago I returned. I went to visit its 1951 Control Tower, recently opened to the public to tell its Cold War story. 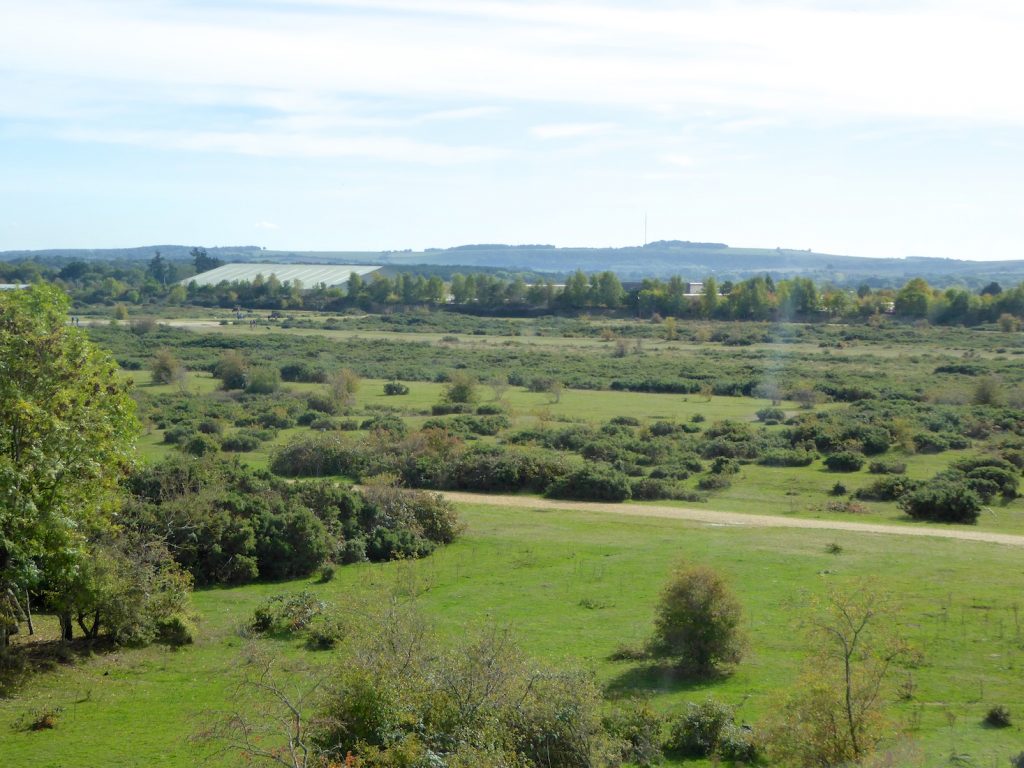 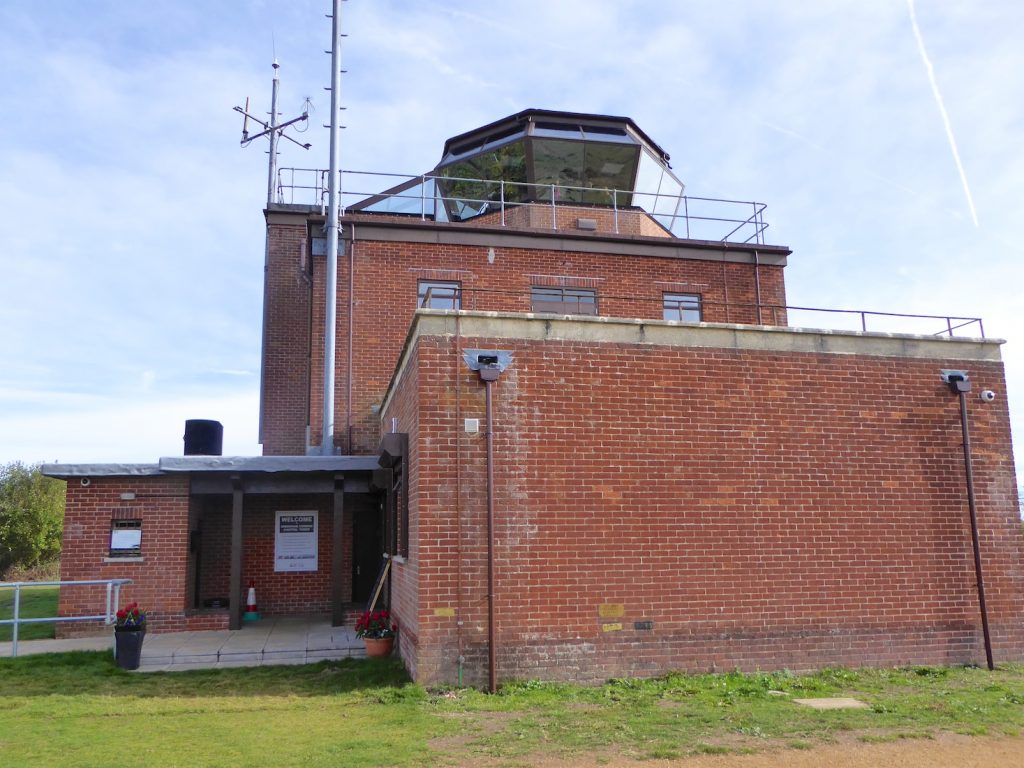 Surveying the panorama before me and blessed with clear skies I discovered other fascinating facts about Greenham. In addition to its military connections, in 1839 it was at Greenham that the winning post of one of England’s finest horse race tracks stood, for the Newbury races. In 1873 it was the site of the Crookham Golf Club, one of the first inland courses in England.

Beginning in 1973 it became the host for Six International Air tattoos several of which I had attended! In 1980 Richard Noble broke the British land speed record here, reaching a speed of 245mph. Chosen by Noble probably because of the length of its runaway, for the same reason, at one point Greenham was designated as an alternative to Heathrow airport for Concorde and as the European landing ground for the Space shuttle.

At the top of the Control tower 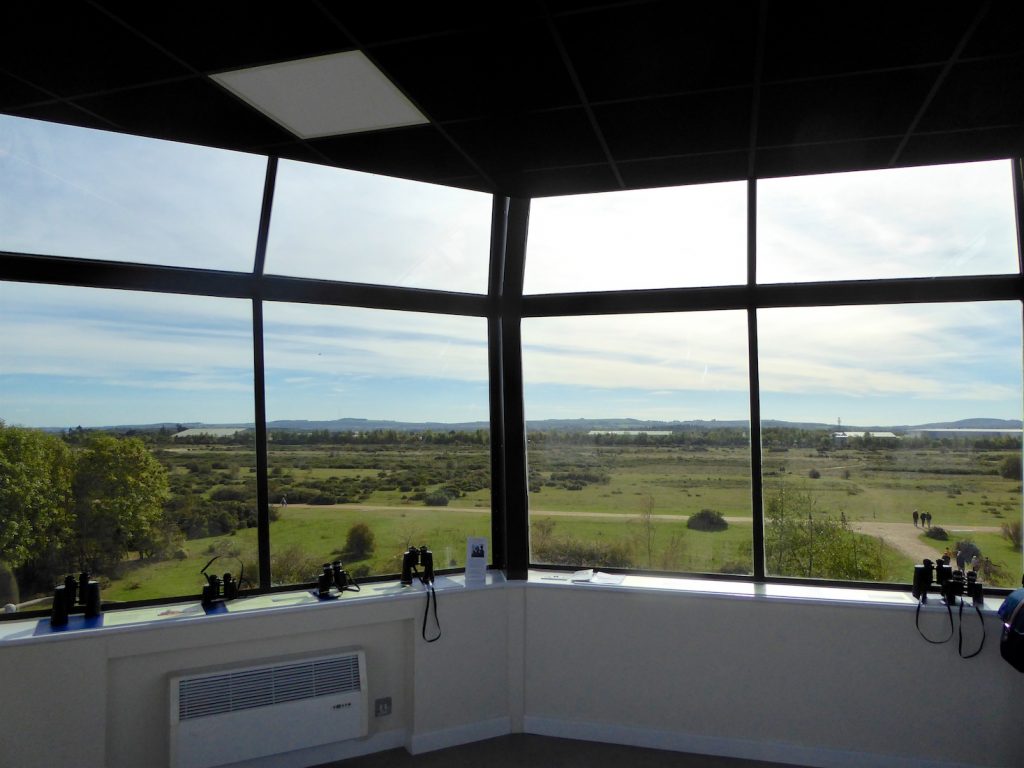 The Control Tower was built in 1951 during the Cold War, when the USAF returned to Greenham, and new runways and buildings were constructed. B47 jets were deployed from Greenham followed by B52 bombers until the Americans departed again in 1964. The USAF maintenance hangers, are clearly visible from the tower now part of New Greenham Park Industrial Park. 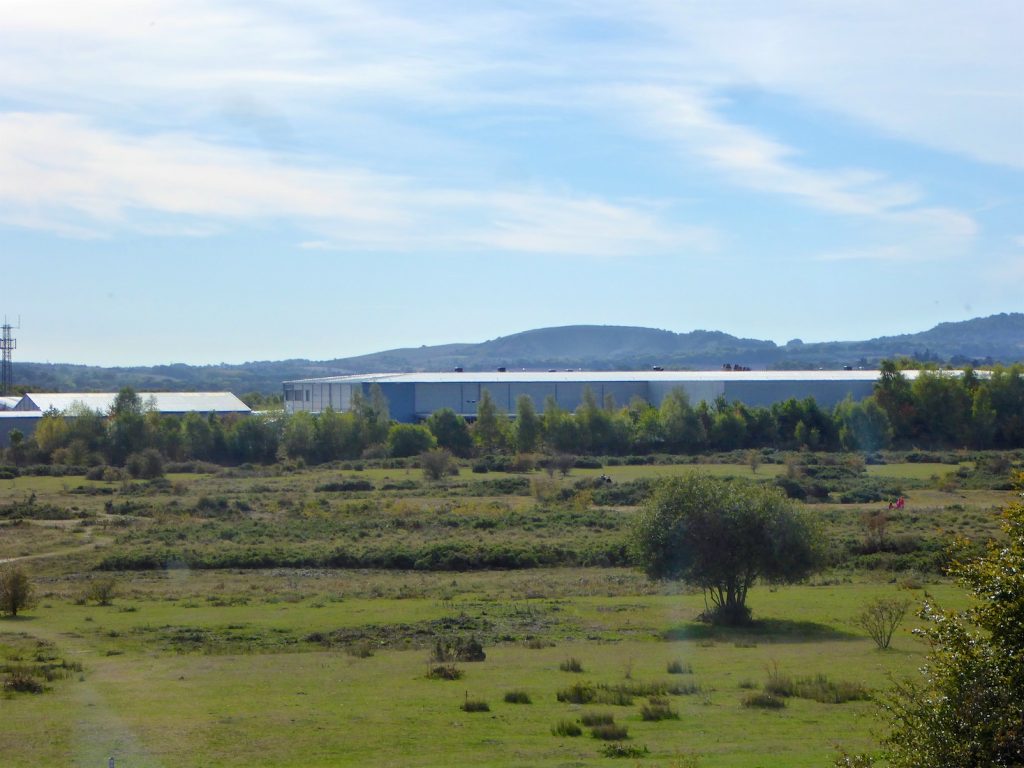 Greenham as a Cruise Missile Base

The threat of the Cold War gripped the world on into the 1980’s and as a consequence the Americans returned. Greenham became a controversial cruise missile base resulting in a woman’s protest camp being established round its boundaries. When it was announced that 96 cruise missiles would be arriving, on 12 December 1980, thirty thousand people, mostly women, joined hands in protest, circling Greenham’s entire 9 mile perimeter fence. In 1981 seventy thousand people formed a human fourteen mile chain from Greenham to the Atomic Weapon and Research Establishment at Aldermaston where Britain’s nuclear weapons are made.

In 1982 the USAF’s 501st Tactical Missile Wing was activated as a launching ground at Greenham and a year later the first missiles arrived. An Alert and Maintenance Area (GAMA) site had been built to house the missiles, six shelters all designed to be able to withstand a direct hit. Each one was 50 feet high, 150 feet long and 16 feet wide, covered in reinforced concrete, titanium sheeting, sand and clay one being designed to be on permanent alert with living quarters.

Today they are privately owned and often rented out as movies locations, Star Wars and Top Gear have both been filmed here as well as a music video for singer Beyoncé.

The GAMA shelters at Greenham Common 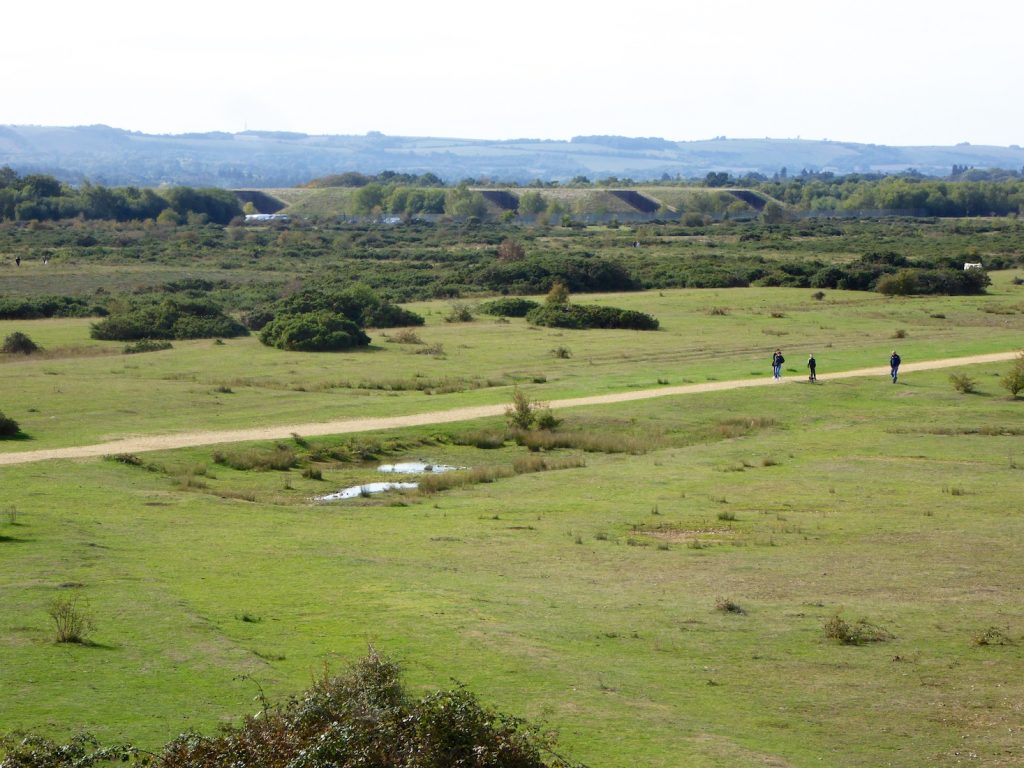 In 1988, following the signing of the Intermediate Range Nuclear Forces Treaty in which USSR & USA agreed to destroy their missiles a Soviet Inspection took place at Greenham. In 1991 the cruise missiles were destroyed and in 1992 the USAF returned Greenham Common to the Ministry of Defence.

In 1994 the airbase was designated as being of special scientific interest and in 1997 the Greenham Common Trust bought it for a million pounds. It eventually became a business park and Newbury District Council bought the open common for one pound. In 2000 the last of the peace camp disbanded and by 2002 the common was opened for all to enjoy as it is today.

In September 2018 The Greenham Common Control Tower was opened.

If you would like to visit it’s free, the tower hosts events and talks, check the website for details and hours. Choose a sunny day and bring your walking shoes as the common is a delight to explore!

Next post Lourmarin, what to do as winter approaches in Provence 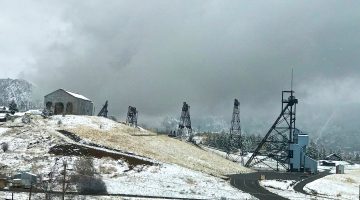