The Floating Harbours at Arromanches

There were many factors contributing to the success of D-Day. Strategic planning, deception and the successful outcome of some of the initial targets was critical, such as Pegasus Bridge, and Point du Hoc. But the major challenge of landing at Normandy was that it had no harbor. The beaches were suitable for landing heavy armor and it was within range of Allied air cover. Once liberated, the Normandy port of Cherbourg would provide vital access for further supplies but there was no where to dock ships and unload vehicles and tanks.

With remarkable intuition, Churchill had discussed this issue back in May 30th 1942, determining that if there was no port, one would have to be built. Huge mulberries comprising of floating roadways and pier heads which would go up and down with the tide were constructed in England, towed across the Channel and assembled off the Normandy coast. Misinformation spread by the Allies helped to ensure that the enemy were expecting an invasion at Calais, not Normandy and Arromanches-les-Bains was chosen to set up Churchill’s incredible floating harbor.

Churchill’s floating harbor is still visible at the picturesque little town of Arromanches-les-Bains. 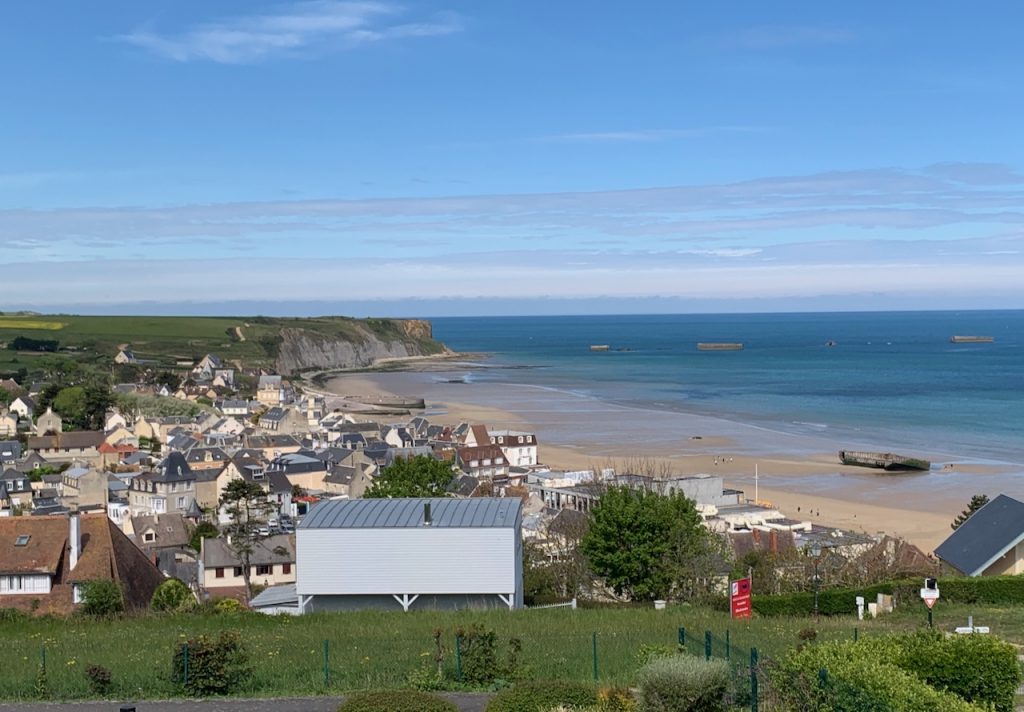 Despite the British resources being at breaking point, they completed the work within 9 months. Arromanches was liberated by nightfall on June 6th and the first ships scuttled the next day. In order to avoid rough seas, huge hollow concrete blocks and old hulks were sunk to form a breakwater, by June 8th the first of these Phoenix Caissons had been submerged and on June 14th the first cargoes were unloaded. 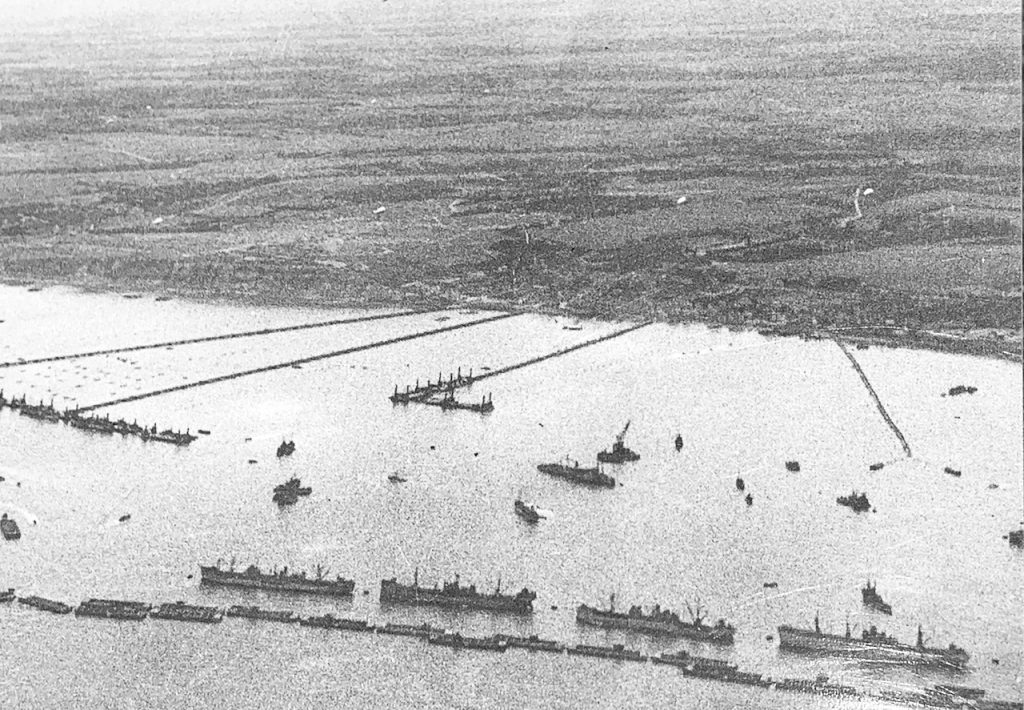 Photograph of The Mulberry Harbours at The Arromanches 360 Cinema

The port at Arromanches was totally operational by the beginning of July, so later that month when Montgomery launched his large-scale offensive against Caen, up to 18,000 tonnes of goods were unloaded daily. An incredible engineering feat, this newly created port was the key to victory in Europe.

The remains of the Mulberry Harbours are still on the beach at Arromanches today. 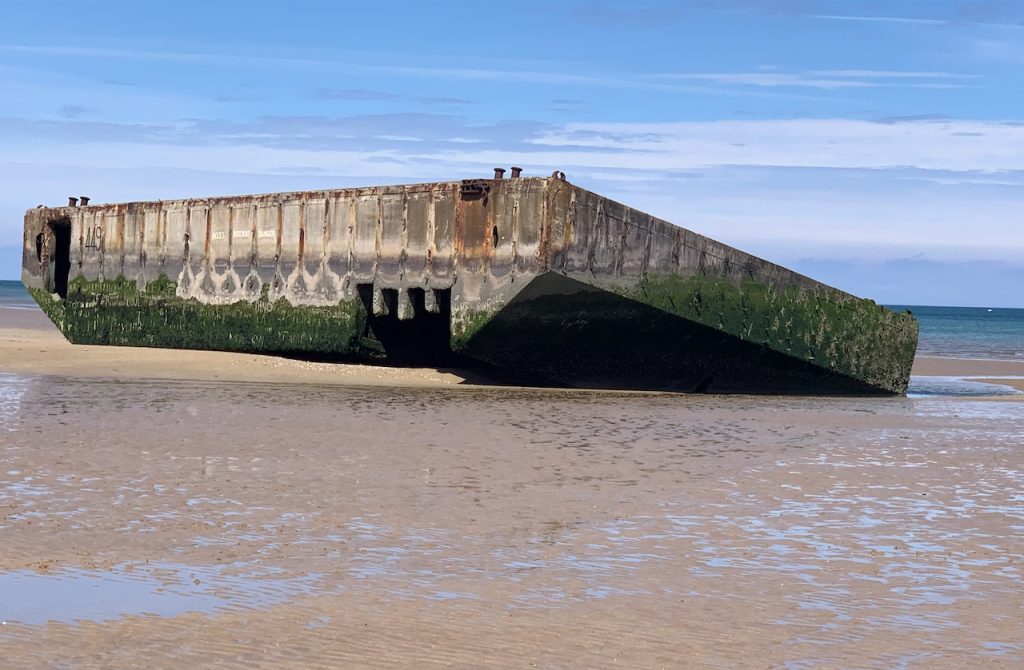 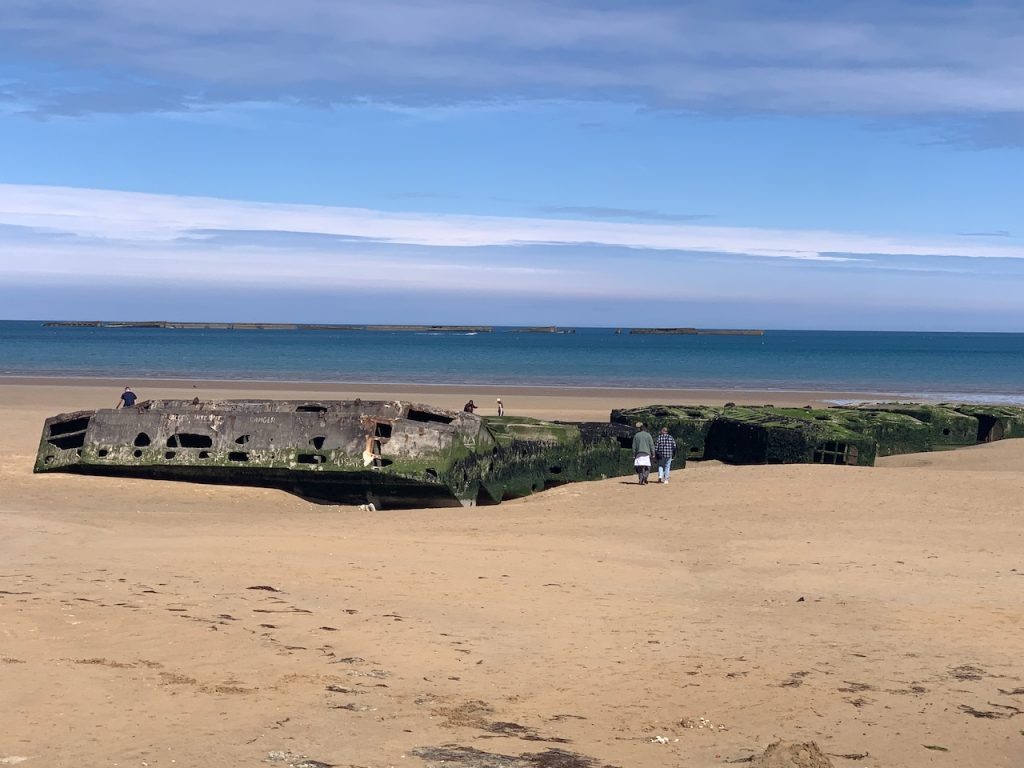 High on the cliff over looking overlooking Arromanches and the Mulberry Harbors is this new garden memorial. It was designed to pay tribute to the D-Day veterans on the 75th anniversary of D-Day. 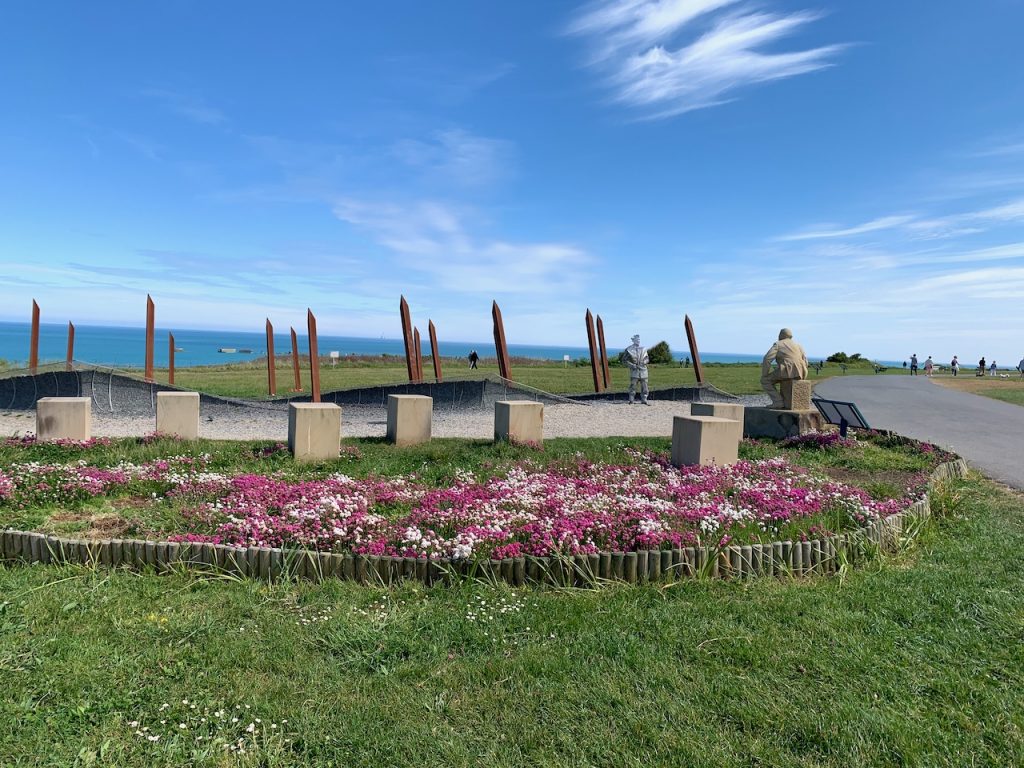 The statue depicts 97 year-old Bill Pendell MD looking back at himself as a 22 year-old landing on the beaches 75 years earlier. 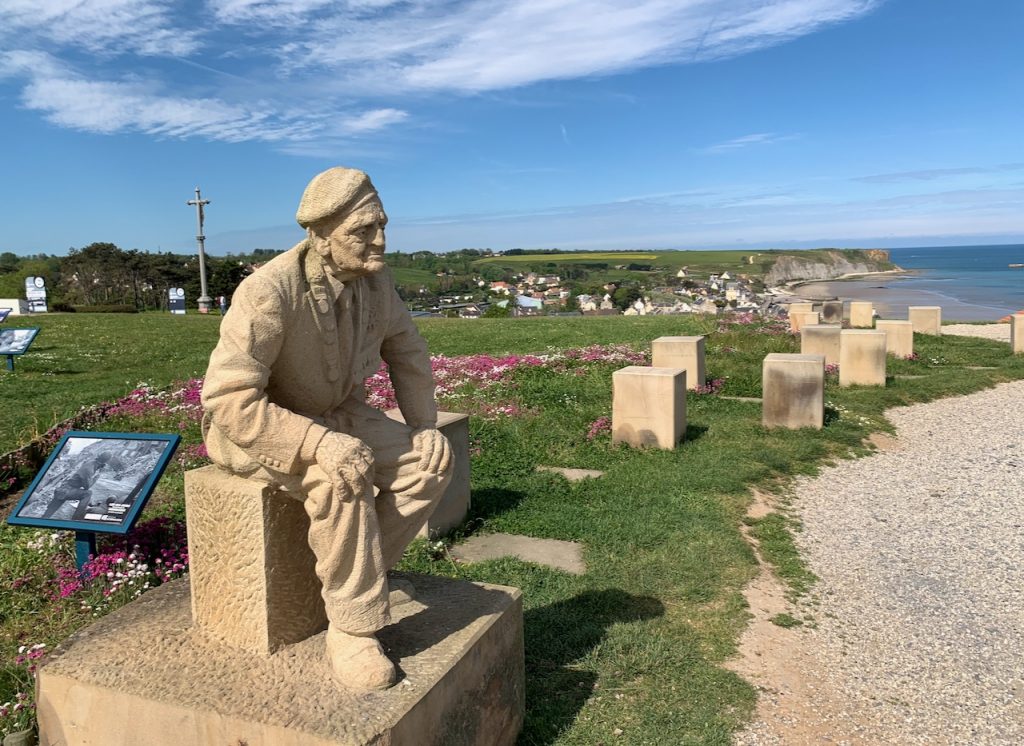 The garden was first exhibited in 2019 at the Royal Hospital Chelsea, London, during The Chelsea Flower Show. It was gifted to the mayor of Arromanches-les-Bains by Field Marshall Montgomery’s grand-children to remain as lasting legacy to D-Day.

The fascinating 360 degree cinema which brings the D-Day story to life is perched just below the D-Day 75 garden. It is well worth a visit. Tickets can be bought online, click here for details

In the town itself, is the Arromanches Museum, also should not be missed. Click here for details

Visiting The Normandy Memorials like all war memorials and cemeteries is very emotional. The sheer scale of human sacrifice is intensely humbling. It’s a debt that can never be repaid.

It is hard to believe that until 2019 there was no official British Memorial at Normandy. Situated near the village of Ver-sur-Mer it is managed by the Common Wealth War Graves Foundation.  It was unveiled by The Prince of Wales, on 6 June 2021, the 77th anniversary of D-Day. 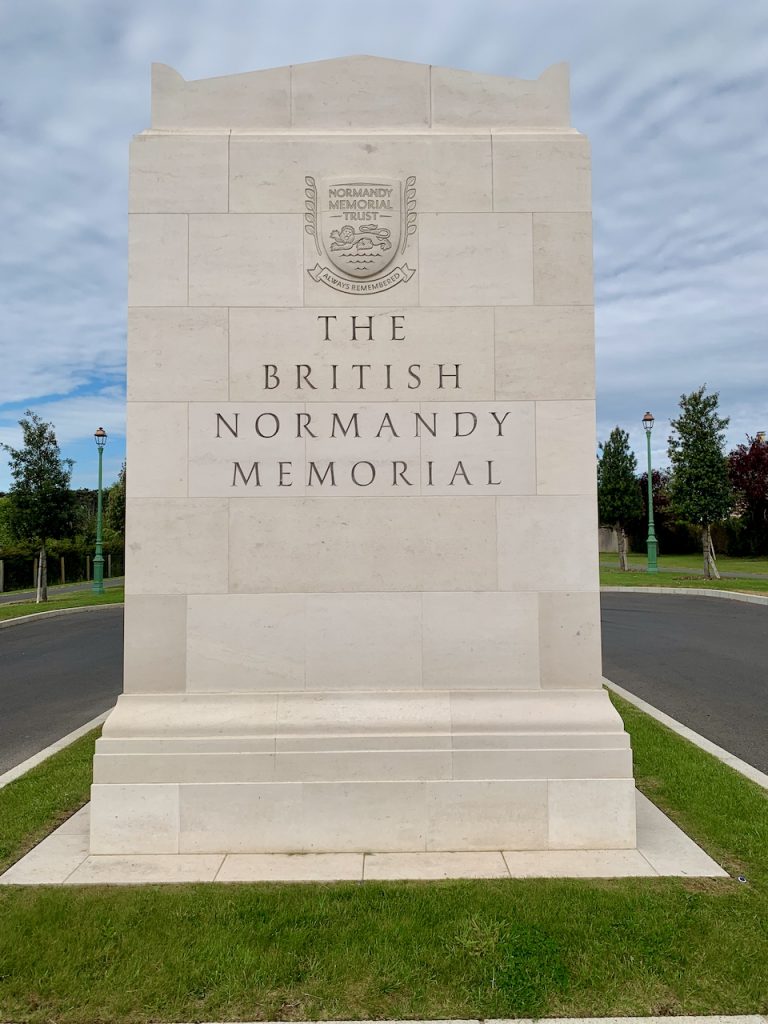 The pathway leading to the main monument is flanked with commemorative pillars that tell the Normandy story. 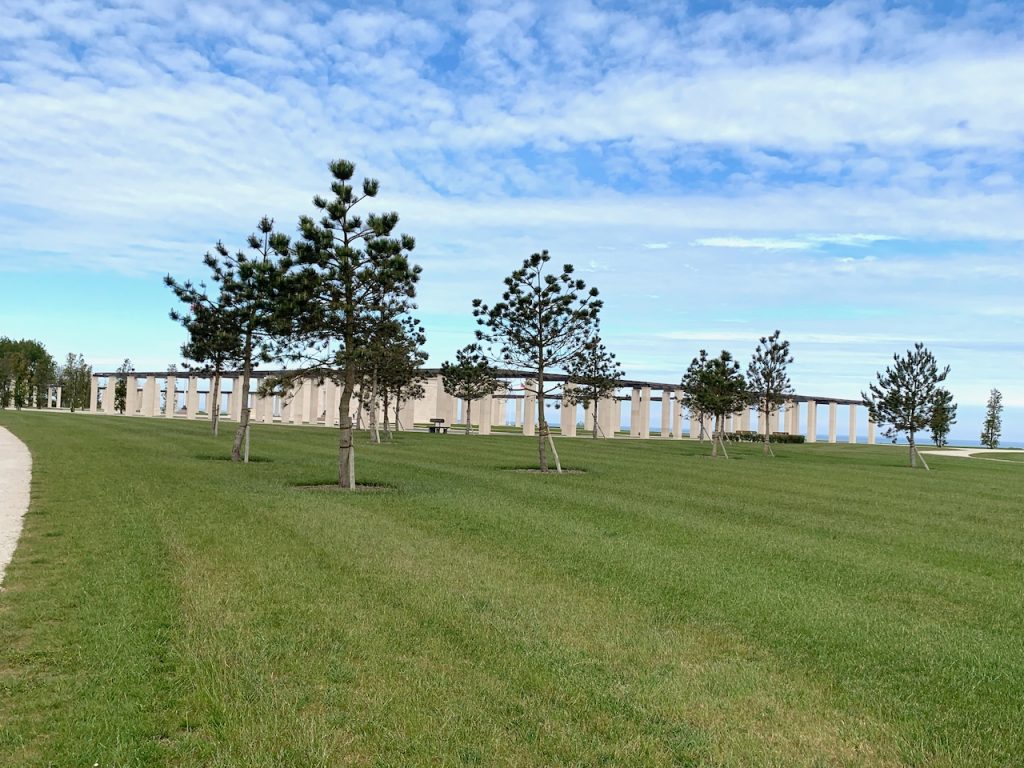 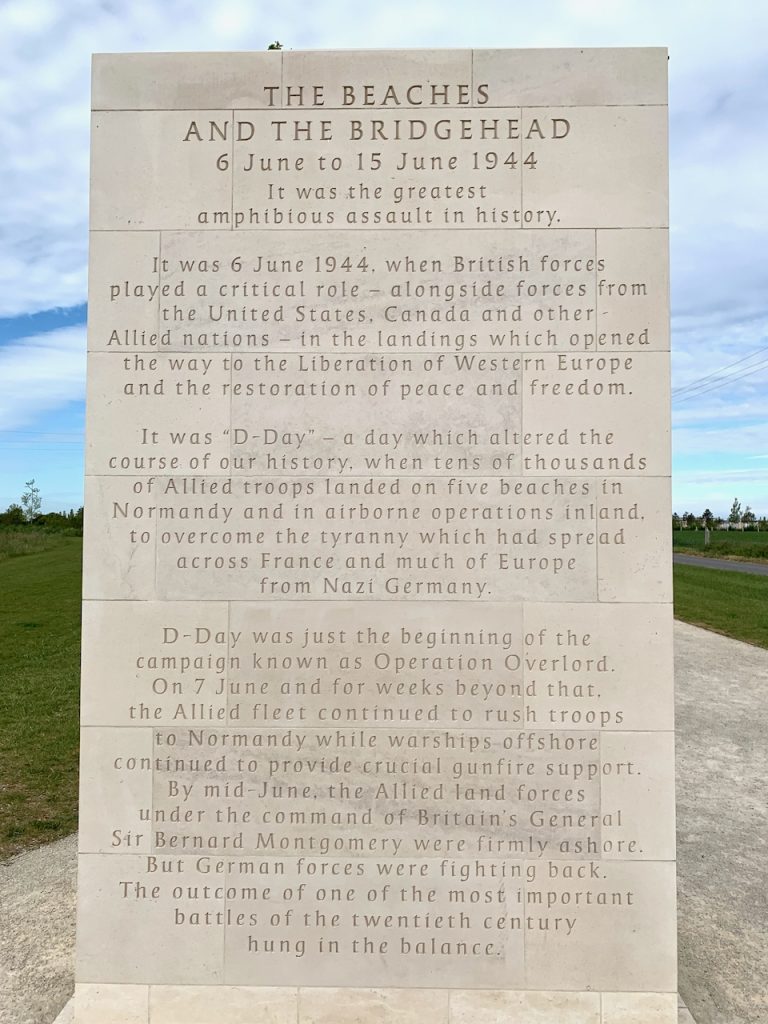 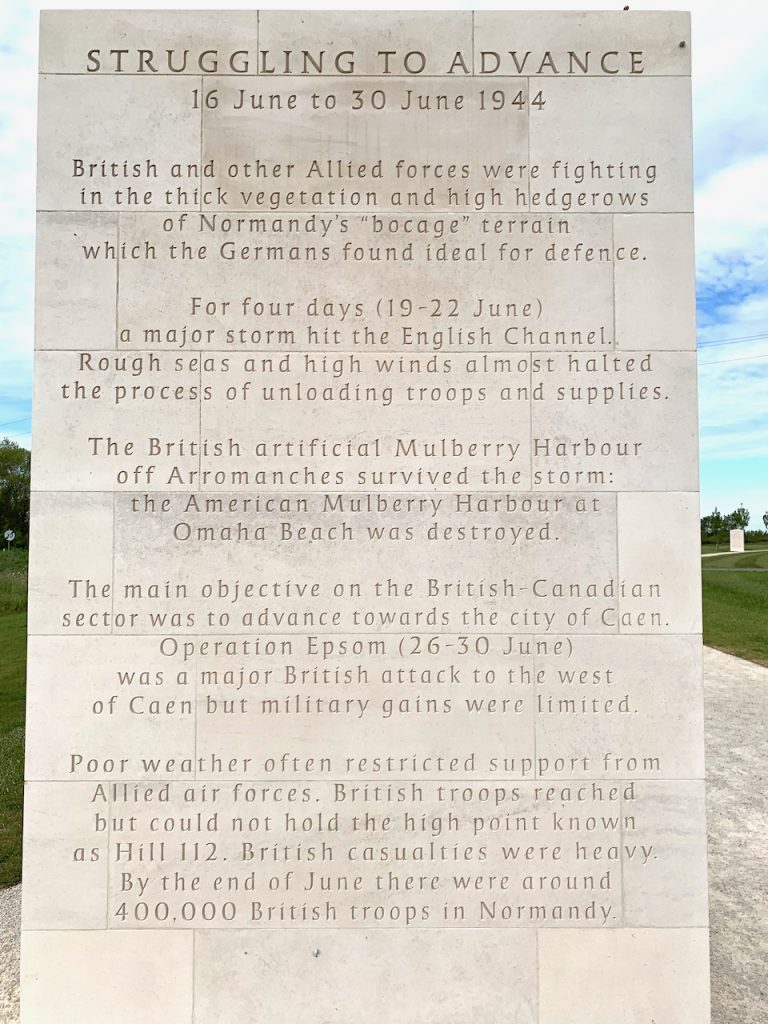 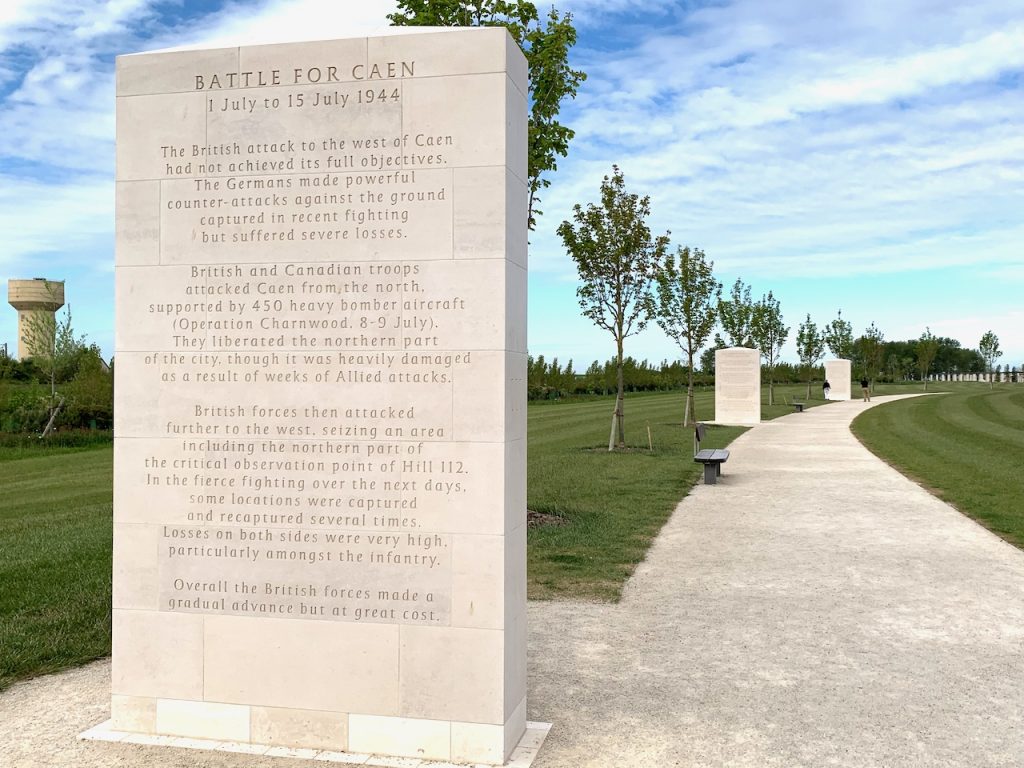 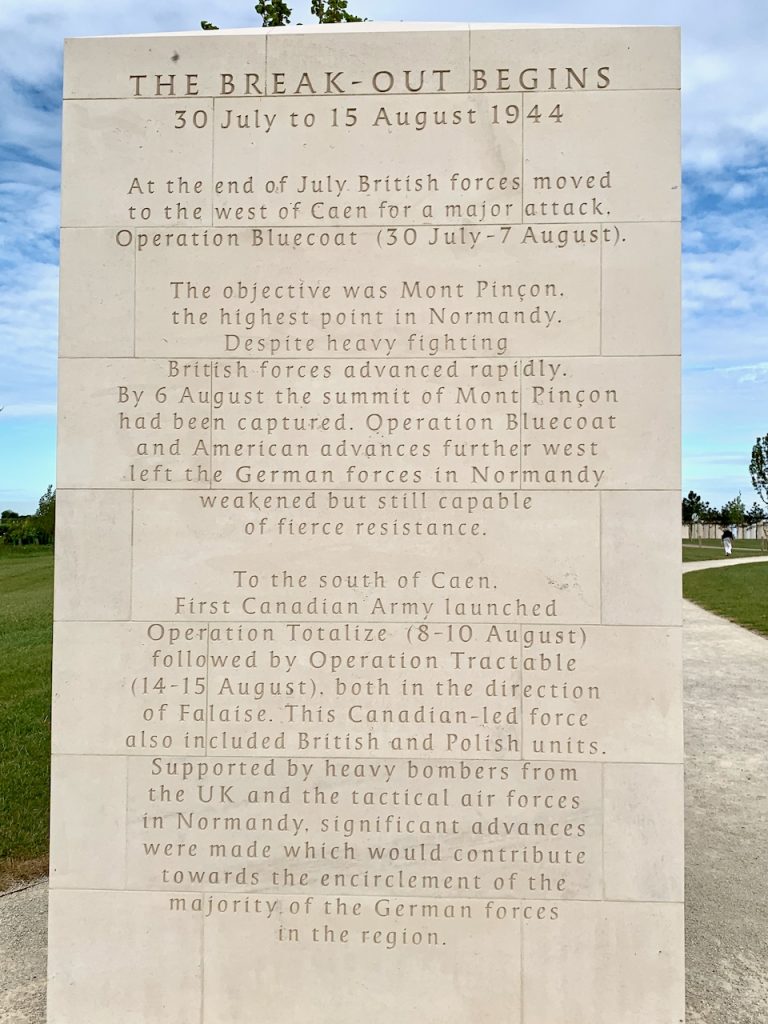 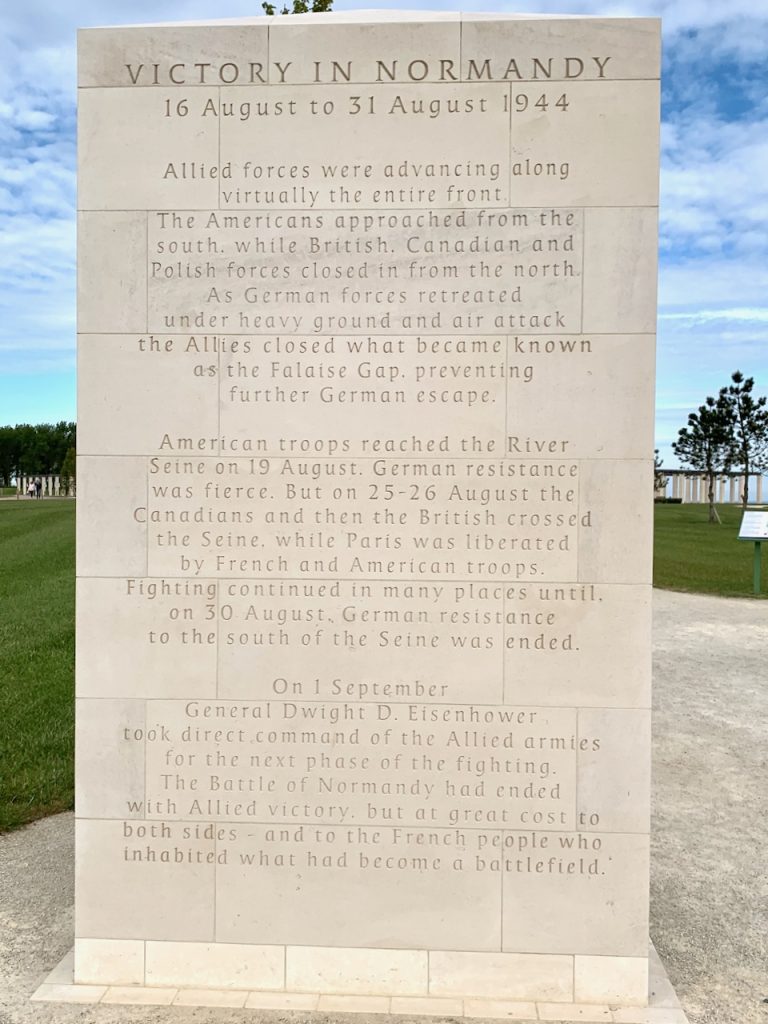 And then you arrive at the monument’s center. 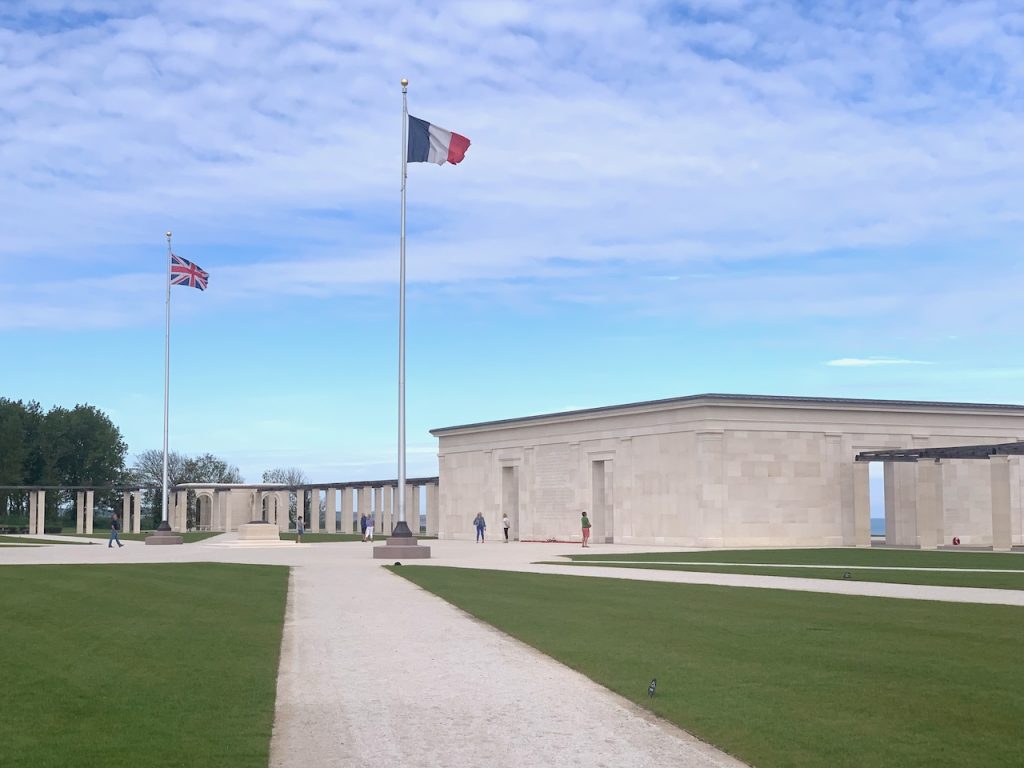 On the main walls words of key World War II leaders have been chosen for each face. On the front, motivational encouragement from Field Marshal Bernard Law Montgomery’s before he led his soldiers into battle:

“To us is given the honor of striking a blow for freedom which will live in history And in the better days that lie ahead men will speak with pride of our doings” Field Marshal B.L. Montgomery 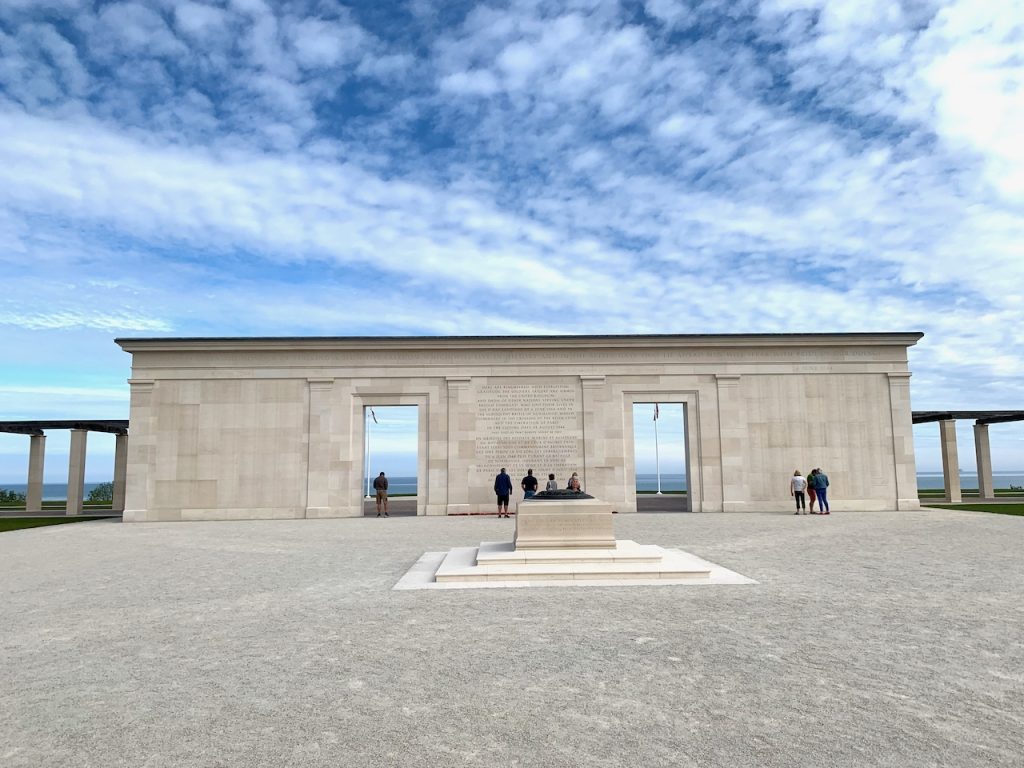 On the opposite side, running up from the beach is a statue of those soldiers. 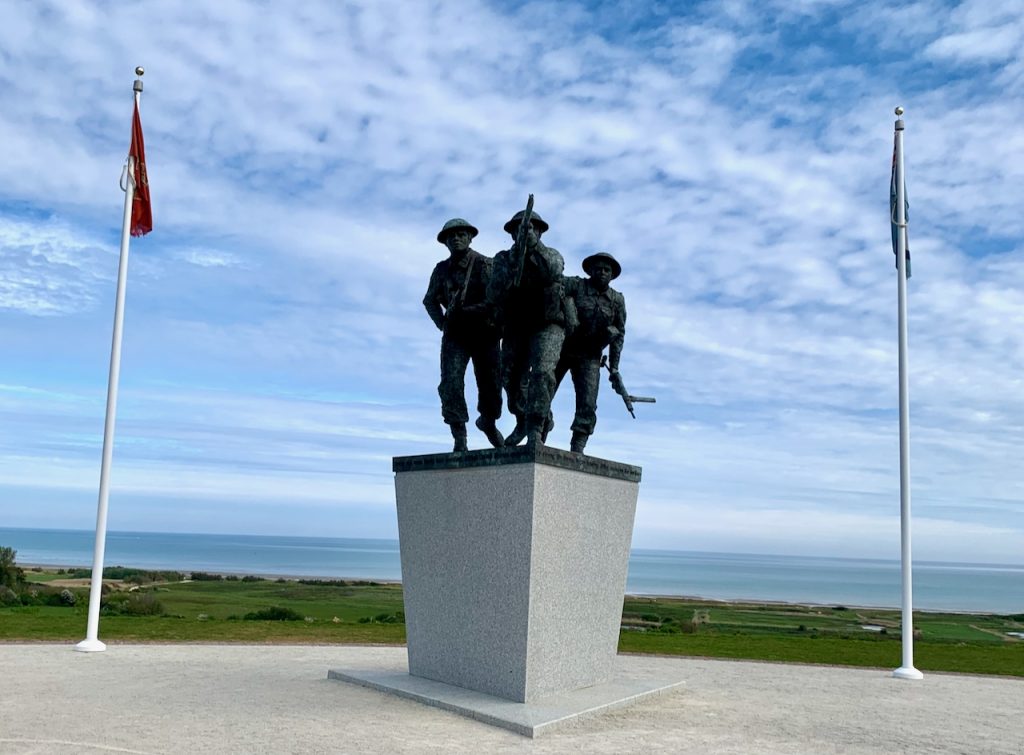 They are facing the other side of the monument, engraved with Churchill’s famous ‘We shall fight on the beaches’ speech alongside King George VI’s inspiring D-Day broadcast:

There is also the support offered by Charles de Gaulle from London, aimed specifically at the French:

“The supreme battle has begun . An immense force of attack or to us of assistance has begun to be deployed from the shores of old England. France submerged for four years, but by no means reduced or defeated stands ready to participate. From behind the heavy cloud of our blood and our tears the sun of our grandeur is starting to reappear.”  Charles de Gaulle June 6 1944 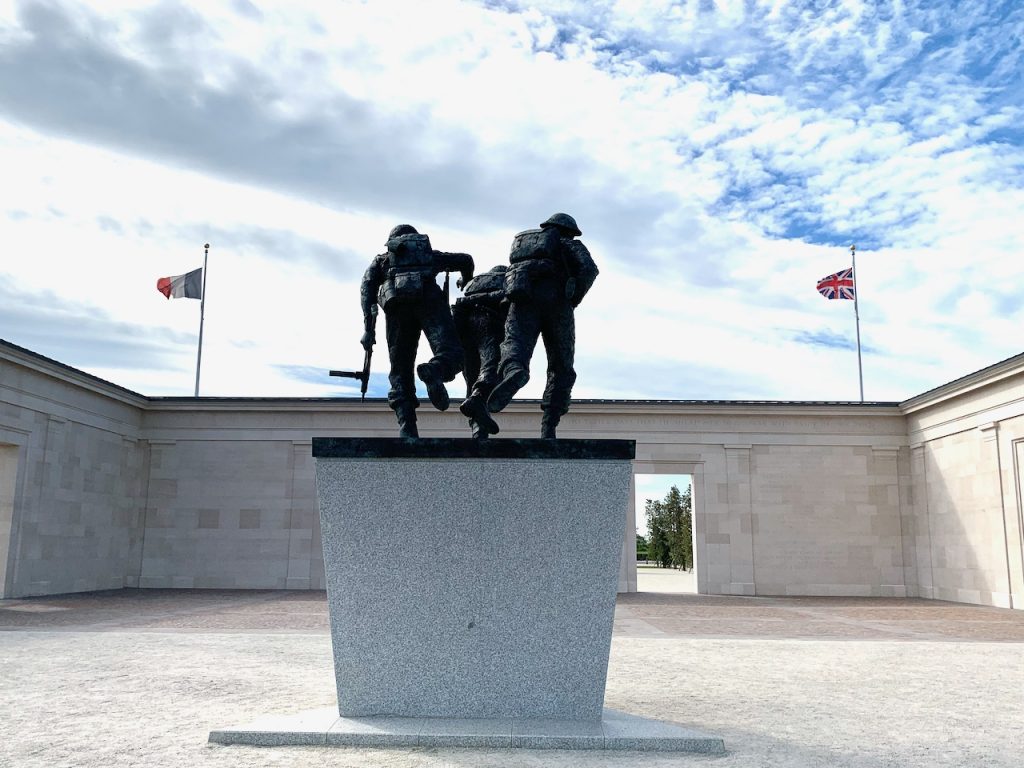 And then there are the names. Thousands of brave British soldiers who lost their lives, for all of us, on the beaches of Normandy………… 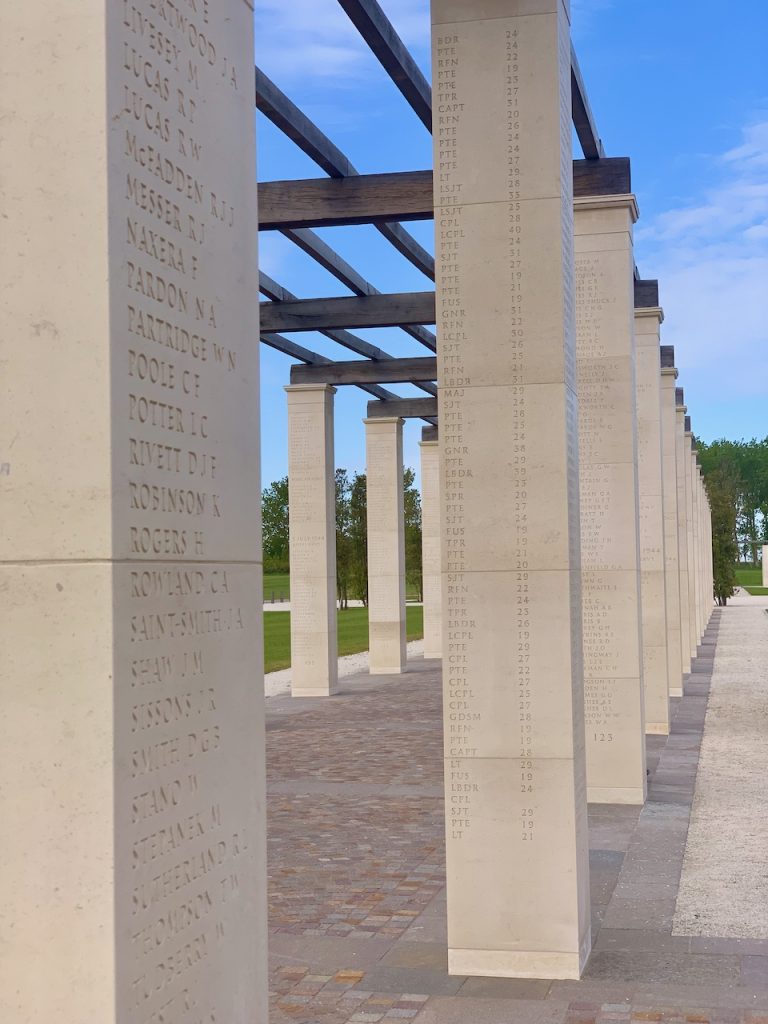 One of the soldiers who landed on Gold Beach all those years ago, was a young 17 year-old soldier, Harry Billinge. Harry survived while all around him his friends fell. He has never forgotten them and throughout his life Harry strived continually to champion the building of this memorial. He was able to be here when it was opened and only passed away a few weeks before my own visit. Much loved by all who knew him and a hero of Normandy you can read his heartfelt tribute here. 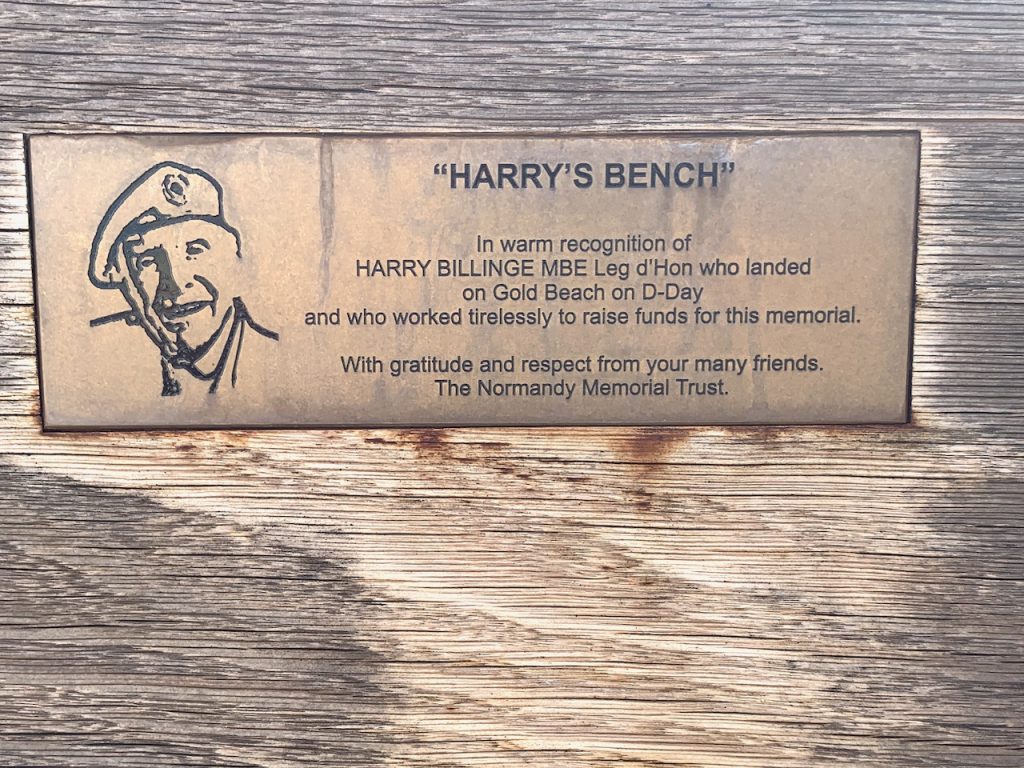 Like all the Normandy memorials, it is free to visit this thought provoking, astounding place, sat above the beach known as ‘Gold Beach’ on D-day. Click here for more information

The Canadian War Cemetery, is situated about 11km east of the British Memorial, closer to Caen, at Bény-sur-Mer.

At this beautiful, tranquil spot we remember Canadian soldiers from the ‘Queen’s Own Rifles of Canada House’, now known simply as Canada House.

The Canadians landed at ‘Juno Beach’.

The 2,049 Canadians who lie here were killed either on that beach or during the subsequent month-long Battle of Caen, or were executed while prisoners of war.

This immaculately kept memorial with its beautiful plants and shrubs is one of two Commonwealth burial grounds also maintained by the The Commonwealth War Graves Commission devoted to Canadians. Click here for more information

The second memorial can be found at the Juno Beach Centre and memorial park near Courseulles-sur-Mer. The centre runs its own guided tours of the museum and the beach, and the German beach defences there can be visited underground (April to October) Click here to learn more

The American Normandy Memorial and Cemetery

The American Normandy Memorial is at Colleville-sur-Mer. If you were driving along the coast you’d probably visit the Canadian Memorial first (45km to the east of the American) then the British (27km east) before continuing to the American. Situated above Utah Beach where the Americans landed there is an informative museum which tells the American’s D-Day story. The memorial is run by the American Battle Monuments Commission

The entrance to the memorial gardens is stunning. 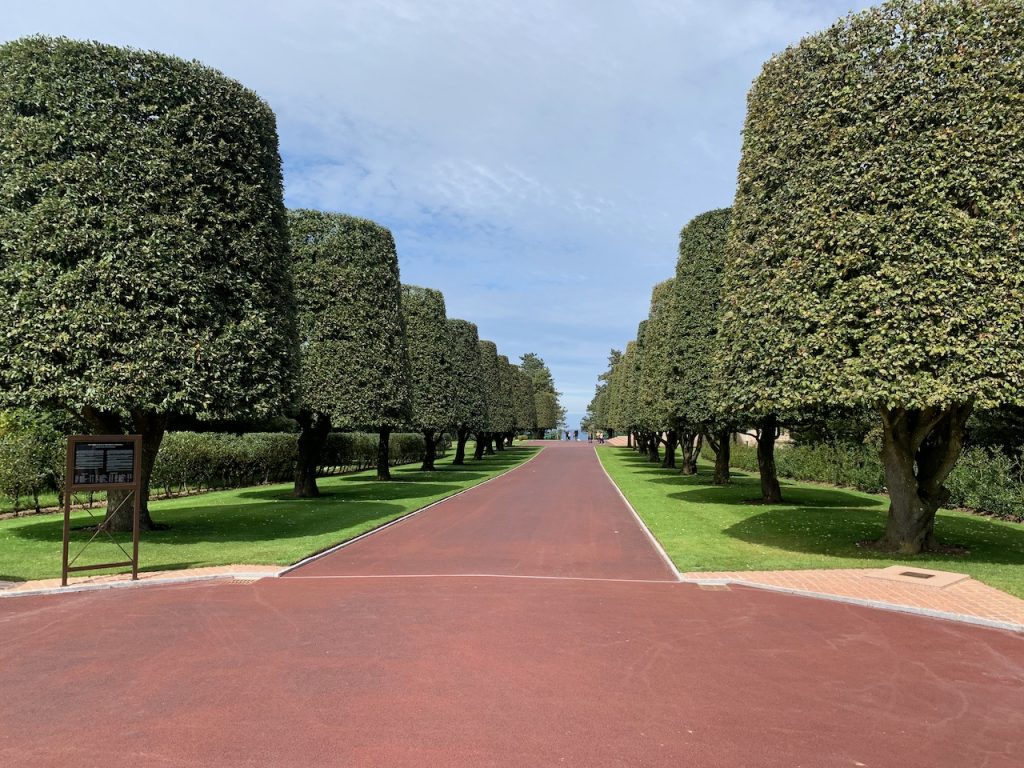 Like the other memorials, the American memorial looks down ‘Omaha Beach’ one of the D-Day beaches where the Americans Landed, ‘Utah Beach’ being the other. 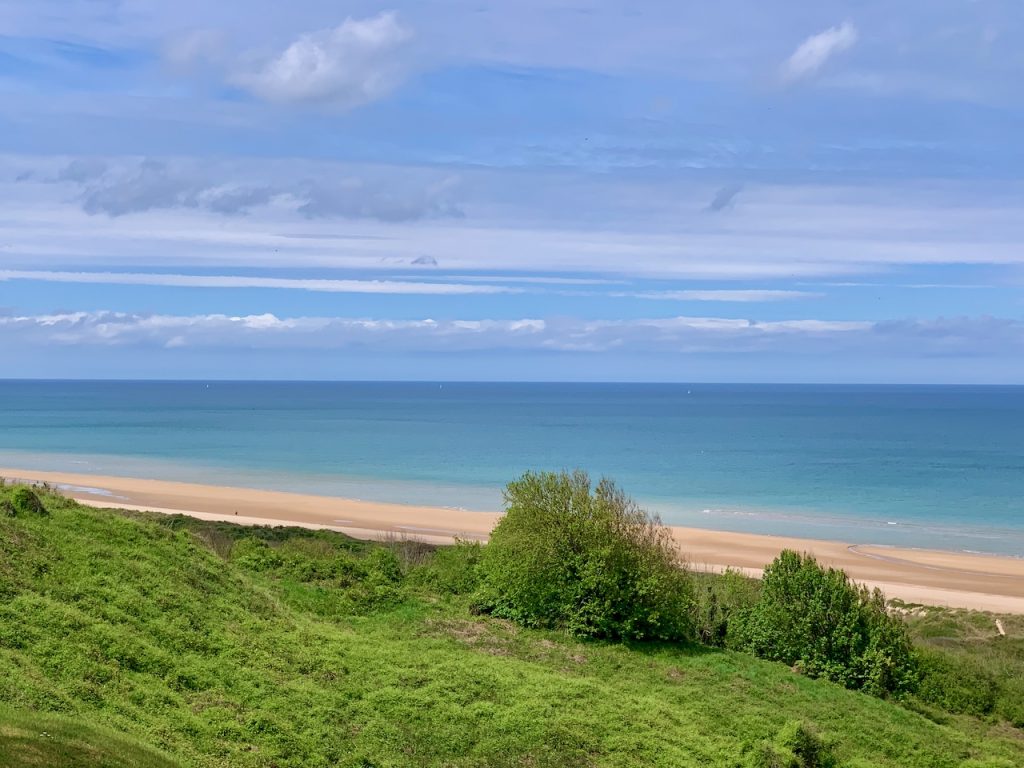 The thousands of white crosses are a stark reminder of the tragic loss of life. Like their British and Canadian allies these young American boys landed in Normandy with no thought of personal gain but to fight for the freedom of the world. The fighting on Omaha beach on D-Day was one of the the bloodiest with over 3000 casualties. 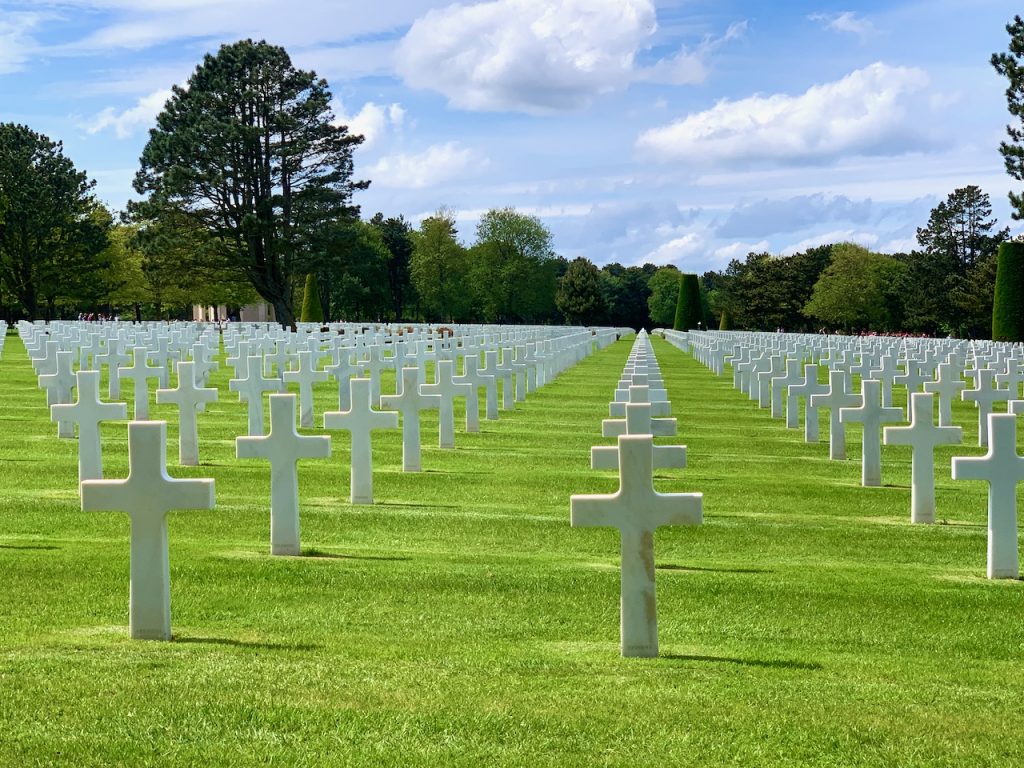 The memorial pays tribute to those soldiers. Click here for more information about visiting this site. 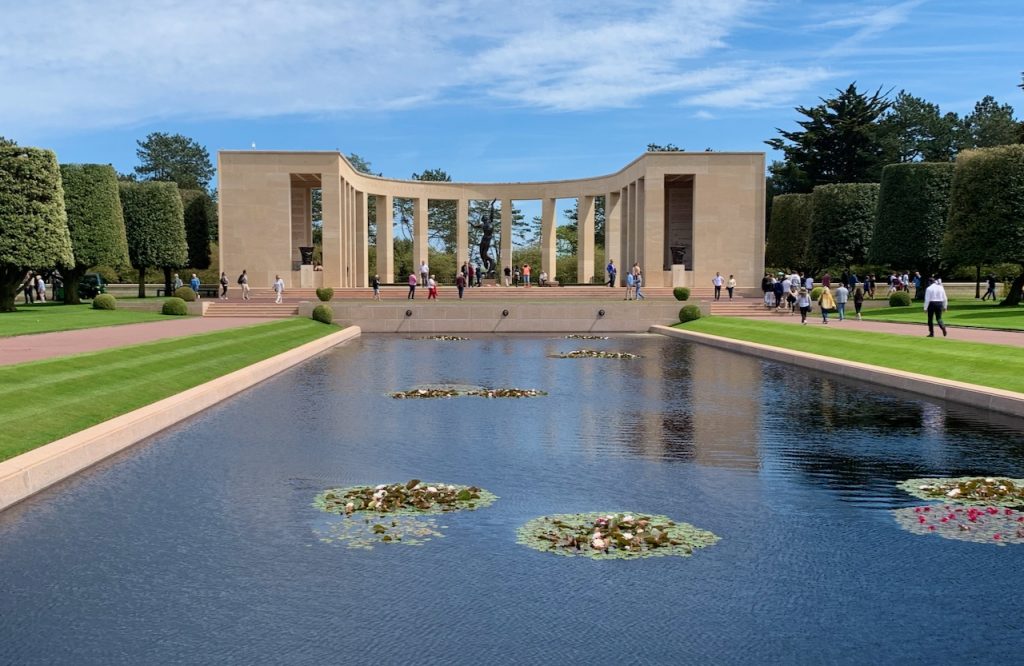 Ultimately the Allies were successful, the careful planning, deception and strategy meant that three months after D-Day, Normandy was captured, it marked the beginning of the end. Yet the loss of life which the memorials attest to, was horrendous.

There are many other sites to visit at Normandy which remember what happened there on D-Day.  Click here to learn more and plan your visit.

words of General Bradley spoken about the landings, which I read at the American memorial, will remain with me and seem an appropriate way to end this post:

“The battle belonged that morning to the thin, wet line of khaki that dragged itself ashore on the channel coast of France”

A line of khaki we should never forget…..

Next post Restaurants we love in Uzès, Aix-en-Provence & St-Rémy-de-Provence 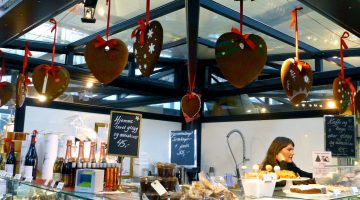