Where exactly do fish and chips originate from? How has this ‘marriage made in heaven’ become one of the most well known food pairings in the world and synonymous with Britain!! It seems that the exact origins fish ‘n’ chips are unknown, moreover they are not as British as one might think!
Chips, or rather pommes frites, were a 17th century French and Belgian invention. They appear to have arrived in Britain in the mid 18th century. The Belgians were possibly the first to conceive the idea of serving them together when they cut fish shapes from potatoes and served these with frites when rivers froze and it was impossible to obtain fish!  At a similar time fried fish was introduced to Britain by Jewish refugees from Portugal and Spain, street sellers sold it from large trays hung round their necks.

Fish and chips are first mentioned together in Shilling Cookery, an 1854 recipe book when fish ware houses sold fried fish and bread as recorded in Dickens’ Oliver Twist.
Who came up with the idea of serving this mouthwatering two-some together is greatly debated. Some attribute it to a northerner, John Lees, selling fish and chips from a wooden hut at Mossley Market in Lancashire. Others to a Jewish immigrant who opened the first fish and chip shop within the sound of Bow Bells in East London in 1860.
Whatever you believe, fish and chip shops sprung up all over Victorian Britain, often wrapped in old newspaper to keep the price down until this was banned in the 1980’s! For generations this classic double act has been enjoyed by millions; flaky white fish served in crispy, golden batter with steaming hot chips, irresistible! Sat on a sea wall on a summer holiday, or buying them as a late night treat or in lieu of having to slave over a hot stove, more often than not munching on them from a paper wrapping, with salt and malt vinegar, licking your greasy fingers! Winston Churchill called them ‘good companions’, John Lennon covered his in ketchup and Michael Jackson liked them with mushy peas
And finally are they healthy? Compared to other take away foods they have 9.42gm of fat per 100gm compared to Pizza-11gm, Big Mac Meal-12.1gm, Whopper Meal-14.5gm, Chicken Korma-15.5gm! Fish ‘n’ chips have 595 calories in the average portion an average Pizza has 871, a Big Mac Meal-888, Whopper Meal 892, Chicken Korma-910! Guess what we are having for supper!!!?

In my wanderings around England this month, especially having spent a week in Yorkshire, yorkshire puddings also became a culinary topic for discussion, served in various tempting ways on many of the local pub menus. My American friends normally refer to them as ‘popovers’ and sometimes they are served instead of bread in restaurants. To me that has always seemed odd, surely yorkshire puddings should be partnered with a roast beef Sunday lunch, dripping with gravy, nestled up to the veggies?!!! Well I started to wonder. Who first made these crisp, doughy delights and how did they first serve it? Is yorkshire pudding actually even from Yorkshire? 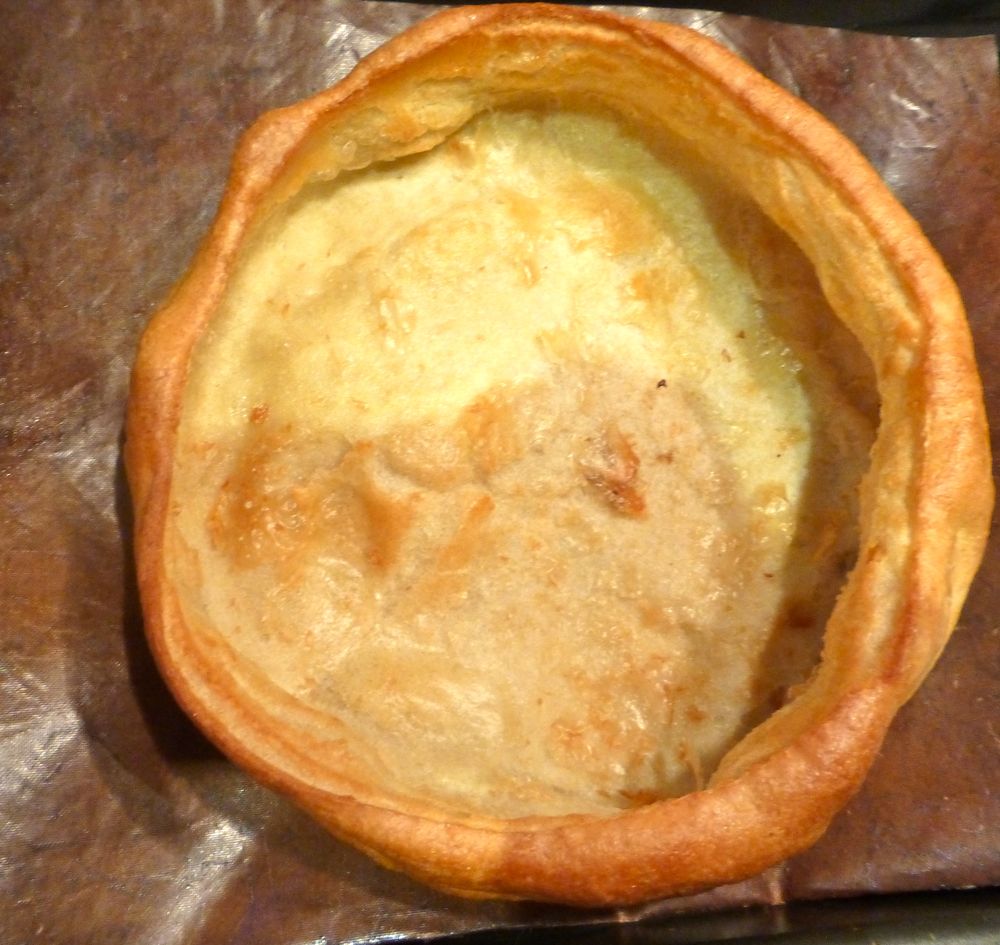 The first recipe for a yorkshire pudding appeared in 1727, in an English cookery book, ‘The Whole Duty of a Woman’, where it was called a Dripping Pudding, the dripping coming from the spit-roast meat. Following the publication of ‘The Art of Cooking Made Plain & Easy’ by Hannah Glasse in 1747, yorkshire pudding became a British national favourite and it does indeed seem to hail from Yorkshire.

Mrs Beeton, England’s most famous 19th century food writer, also had her own yorkshire pudding recipe, although she failed to stress the critical importance of an extremely hot oven and her suggestion of cooking the puddings in advance was a severe error. Her mistakes were blamed by local Yorkshire people on her southern origins! Today we would rely on one of England’s many cooking experts such as the most beloved Delia Smith!

Method
To make the batter, sift the flour into a bowl (with a cloth under it to keep it steady), holding the sieve quite high to give the flour a good airing, add some seasoning then make a well in the centre.
Break the egg into it and beat with an electric hand whisk (you can also use a balloon whisk), gradually incorporating the flour, and then gradually add and beat in the milk and water.
When its all in, slide a rubber spatula all around the sides and base of the bowl to get any escaped bits of flour. Then give it one more whisk.
There is no need to leave the batter to stand, so make it whenever it’s convenient.
If you are cooking your Yorkshire to accompany a roast, about 15 minutes before the joint is due to come out of the oven, increase the heat to 220°C, gas mark 7 add the dripping (or oil) to the pan and place it in the oven to heat, for 10 minutes.While your meat is resting, or when you are ready to cook the Yorkshire, place the pan or tin over direct heat, turned to high, while you pour the batter into the sizzling hot fat.
Immediately return the tin to the highest shelf in the oven (or, if you have roast potatoes on that one, the second highest).
The pudding will take 25-30 minutes to rise and become crisp and golden.
Serve as soon as possible: if it has to wait around too long it loses its crunchiness but if it does pop it under a hot grill or back in the oven to crisp up.
In 2014, the yorkshire pudding remains a staple in many roast dinners, although by the end of the 20th Century making it ‘from scratch’ was rivaled by the first commercially produced alternatives, with Yorkshire based Aunt Bessie’s brand.
In 2007, York MP Anne McIntosh, tried to get yorkshire puddings the same protected status as French champagne! “The people of Yorkshire are rightly and fiercely proud of the Yorkshire pudding,” she said “it is something which has been cherished and perfected for centuries in Yorkshire.”
In the same year, the Royal Society of Chemistry declared that to be called a ‘yorkshire pudding’ it had to reach a designated height of 4 inches’ Another scientist said that hailing from Yorkshire is the secret key to making the perfect pudding! Whatever your thoughts, the yorkshire pudding still normally makes its appearance at Sunday roast lunches especially when beef is served. My mother and her mother before her, always made them as individual puffs, delicious! 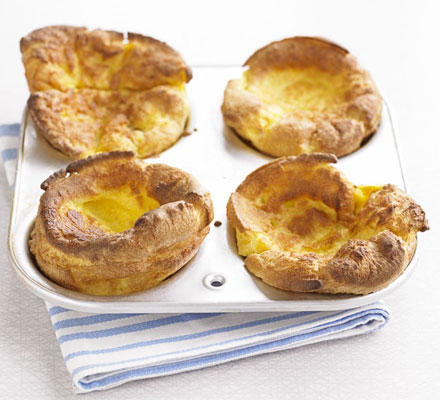 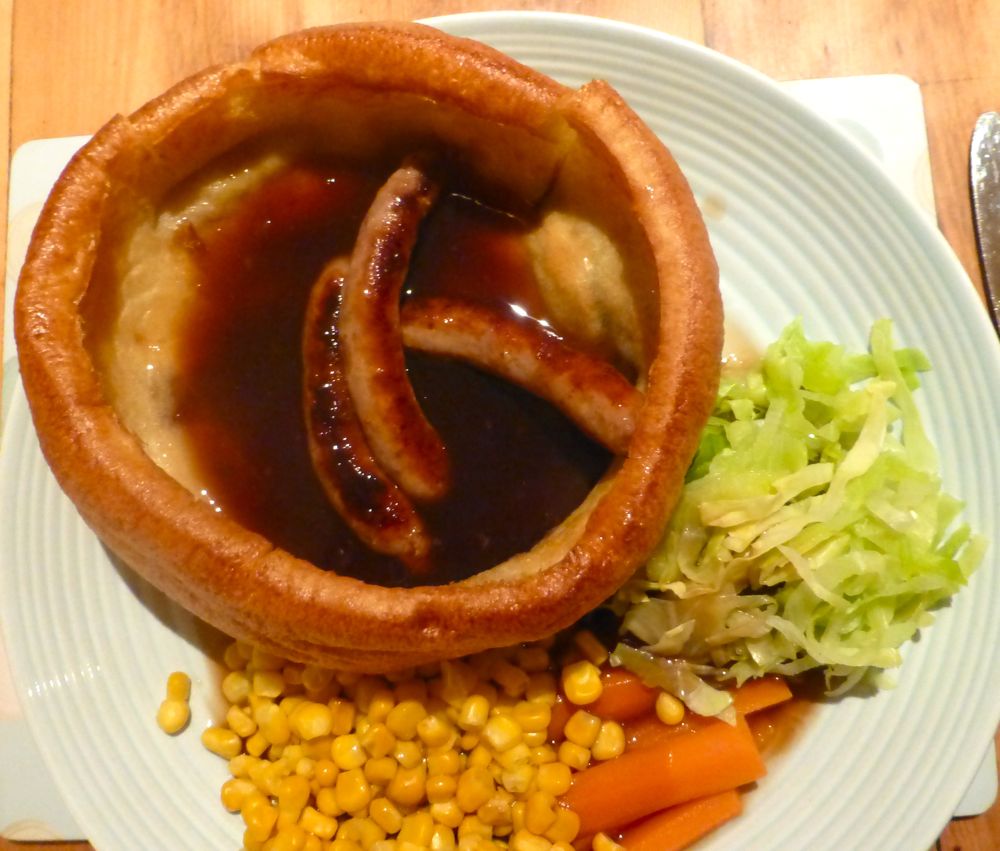 In Yorkshire it is often eaten, as it was done traditionally in Britain, as a separate course prior to the main meat course, when it was used to fill people up! Obviously those Americans got it right serving it separately, perhaps as it was originally intended!!!!

Next post The biggest Naan bread, from Bradford, England 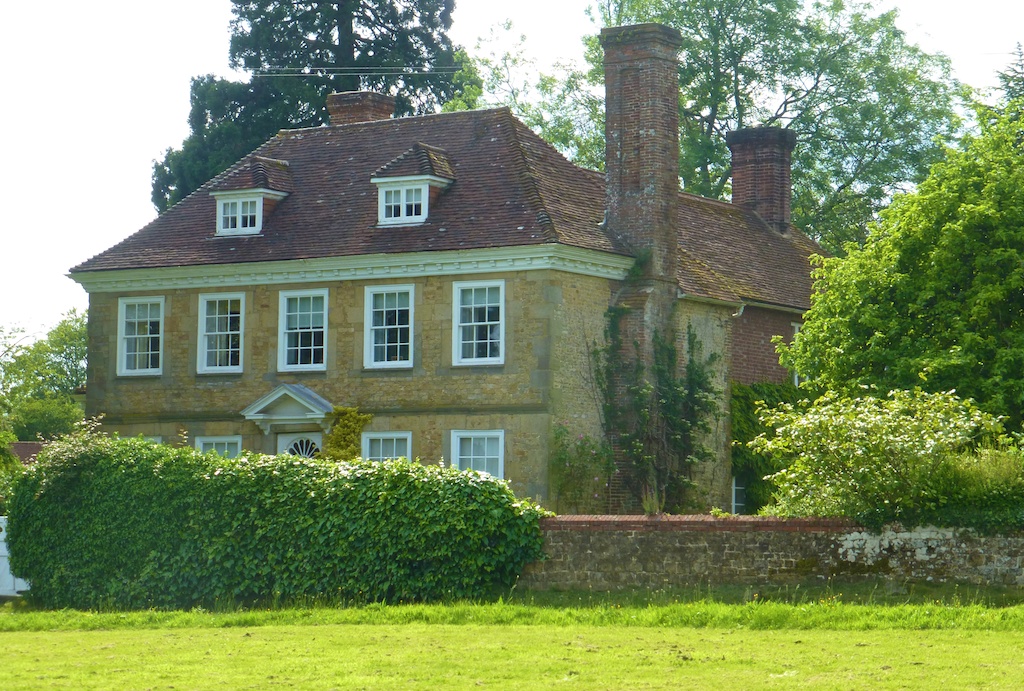