On Friday 27th January 2012, we left England in our newly acquired, left-hand drive, Renault Clio (not much bigger than an American golf cart!) with some degree of anxiety. Would this fourteen year old, so far unknown, fairly well used (100 000 miles on the clock!) prove to be reliable? Visions of standing on a french autoroute with a broken, steaming engine, trying to ask for help in my stumbling french, whirled in my mind…..

However the first challenge had been met with 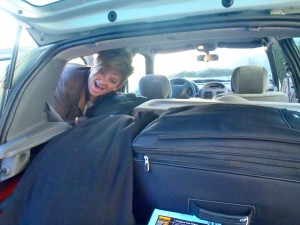 Kate’s superb packing of 6 months luggage, our faithful ‘Arabella’ (Kate’s name for her GPS) was programed, even the weather was cheering us on, we had been blessed with a beautiful, bright, crisp morning. It felt as if nothing could impede our journey and nothing did.
We arrived at the ‘Chunnel’ 50 minutes ahead of schedule and caught and earlier crossing, so before I knew it I was gingerly steering us aboard, we were really doing this!
Clio sped through the wintry, french countryside and 300 km later we were pulling up at our ‘très chic et moderne’, now highly recommended, Accor hotel! Like 2 excited children we continued on the next morning, slightly less anxious about ‘Clio’, who had to battle driving rain and fog, never mention all the french cars who obviously thought she had a cute ‘postérieure’ as a never ending stream of them insisted on getting as close as they could to get a good look!!
At the first sign for Marseilles I gasped and when Avignon was sign posted, I tightly squeezed Kate’s hand. 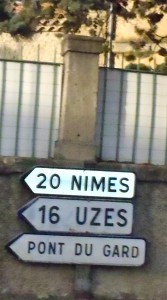 40 mins later when we saw a sign for our destination, Uzès, we both laughed and yelled, it was an ‘ahhhh’ moment!! On leaving the autoroute behind, the winding country road, flanked on both sides with vines and olive groves, left us both speechless and near to tears. However emotions had to be held in check as practical matters still needed to be attended to in the form of a lightening visit to ‘Carrefour’! 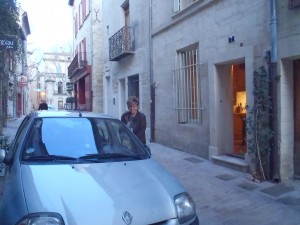 Clio, then even more loaded up with wine, cheese and baguettes, gently took us on our last 6 km to Uzès. Everything seemed to be bathed in a honey glow welcoming us, the sun setting on the warm sandstone coloured buildings, the remenants of the flower market, Kate gasping with wonder and delight, me trying to see through my tears, we had arrived, it felt like coming home………. 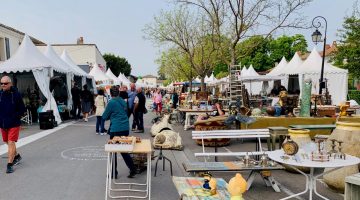