Last time I wrote about my incredible and somewhat unexpected tower tour at Salisbury Cathedral. But our adventure didn’t end with the tour, for apart from being a magnificent testament to medieval architecture, we discovered that the cathedral is also home to the Magna Carta, one of the world’s most famous documents which for centuries has inspired and encouraged movements for freedom and constitutional government around the world.

The Magna Carta at Salisbury 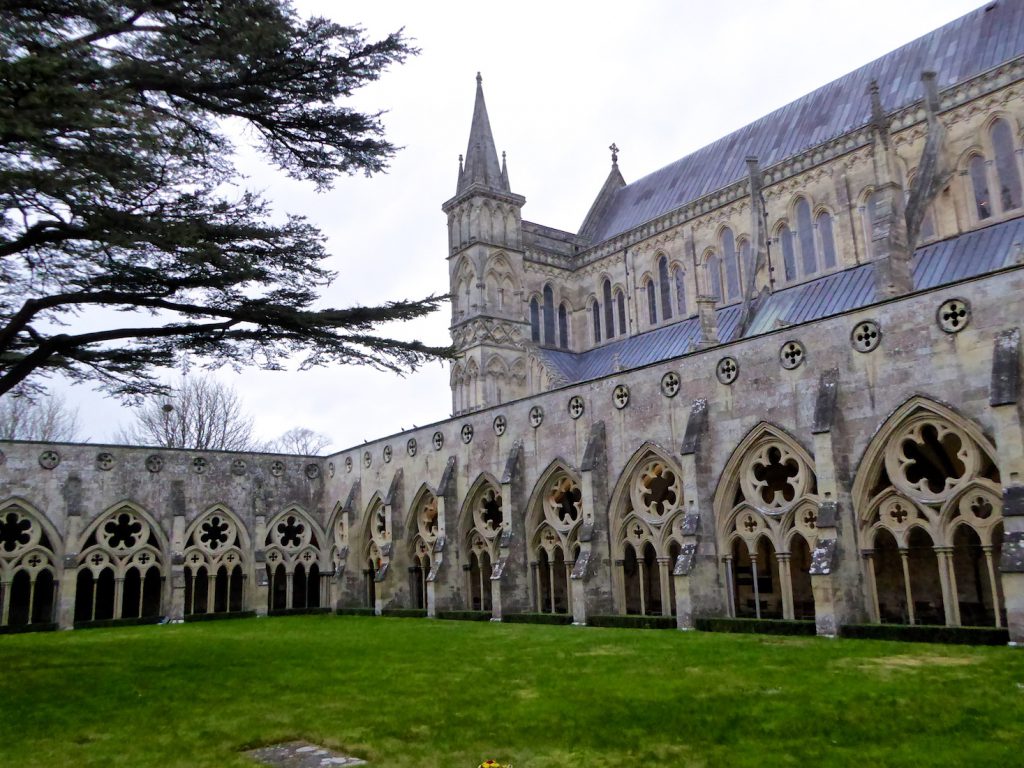 Wandering along the cloisters of the cathedral you will come to the exquisite Chapter House where the Magna Carta is housed.

Entrance to the Chapter House 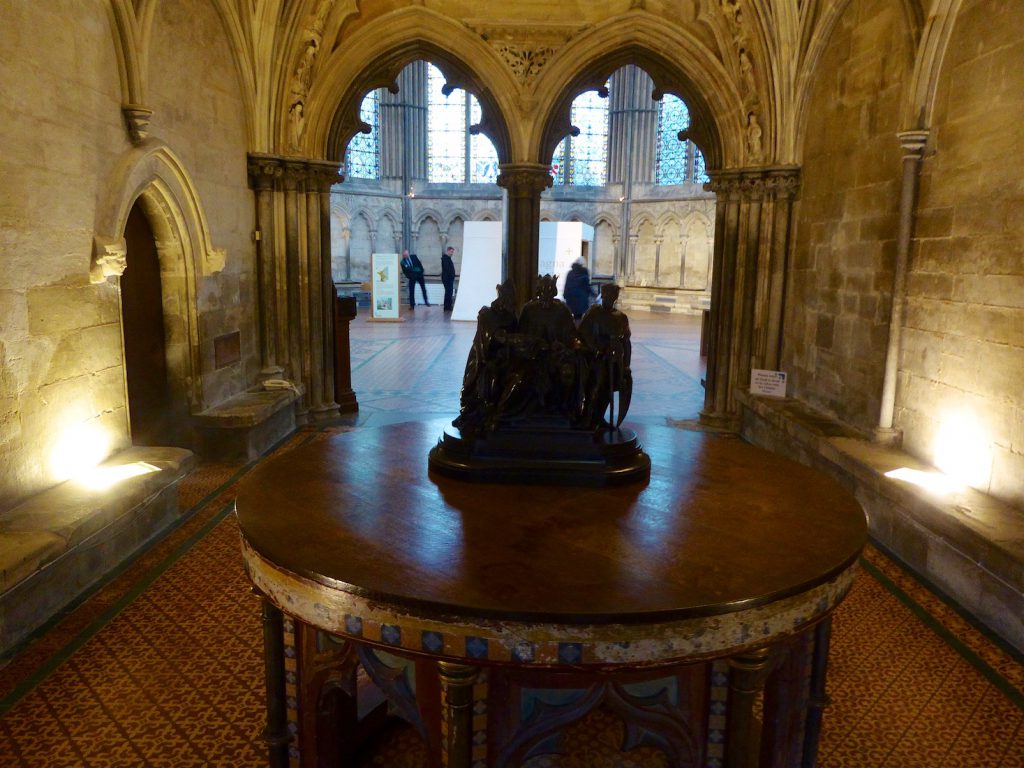 Handwritten in Latin on parchment (sheepskin), it is the best preserved of the four remaining original charters still in existence, all of which date back to 1215. It was bought to Sarum by the archbishop of Canterbury’s chief official, Elias of Dereham who played a significant role in its negotiation. He was also responsible for the distribution of at least ten of the original charters which probably numbered between 40 to 60.

Inside the Chapter House 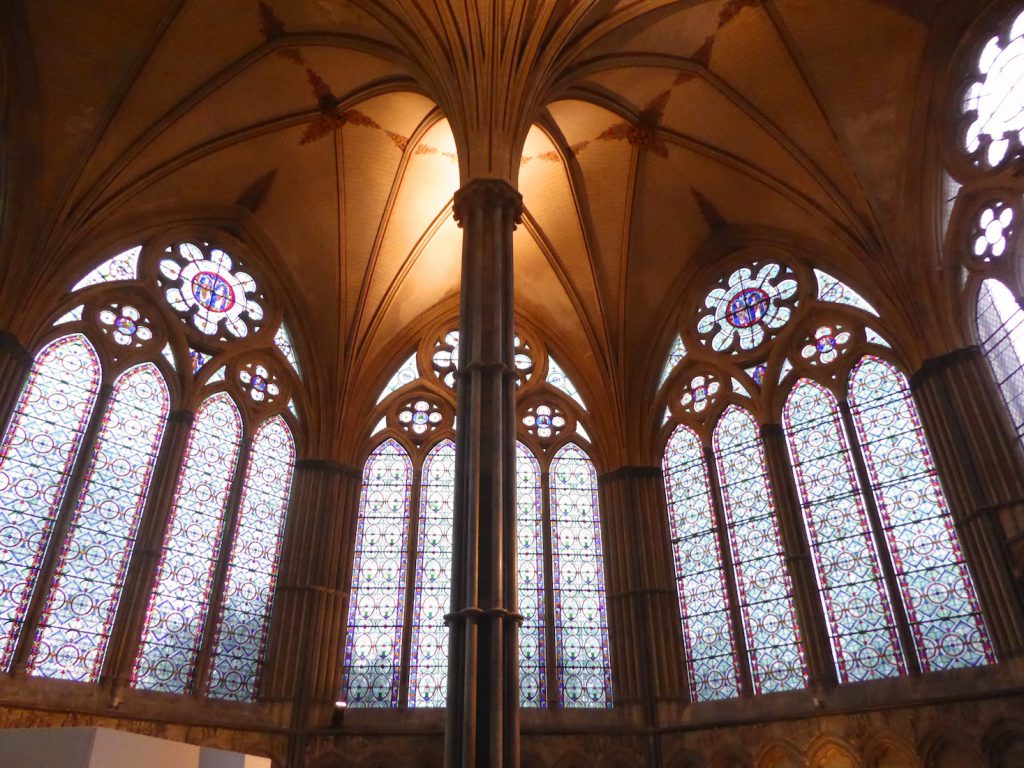 What is the Magna Carta?

The Magna Carta (literally meaning ‘great charter’) was written to establish the fundamental rights of people and the monarch, particularly with regards to their relationship with the church.

It was negotiated at Runnymede, near Windsor, in 1215 between King John, the Church and key Barons of England to establish constraints upon what they considered the tyrannical rule of King John. Enraged by crippling taxes imposed upon them to pay for the King’s wars in France, the Barons wished to protect their rights and wealth. At the same time, the Church, integral to all aspects of medieval life providing education, healthcare and welfare, as well as being an an immensely wealthy landowner, angered by King John’s interference and rejection of the Pope’s choice for the next archbishop of Canterbury wished to assert their freedom.

Despite signing the charter, King John had no intention of abiding by it and as soon as he had regained the Pope’s support by agreeing to his choice for archbishop of Canterbury, he appealed to him for the charter’s annulment. During the resulting civil war King John died and was succeeded by his nine year old son Henry III. When those fighting on behalf of the young king were victorious, to cement the peace, his regent, William Marshall, reissued the Magna Carta and it became a document in support of the monarch.

A copy of the Magna Carta 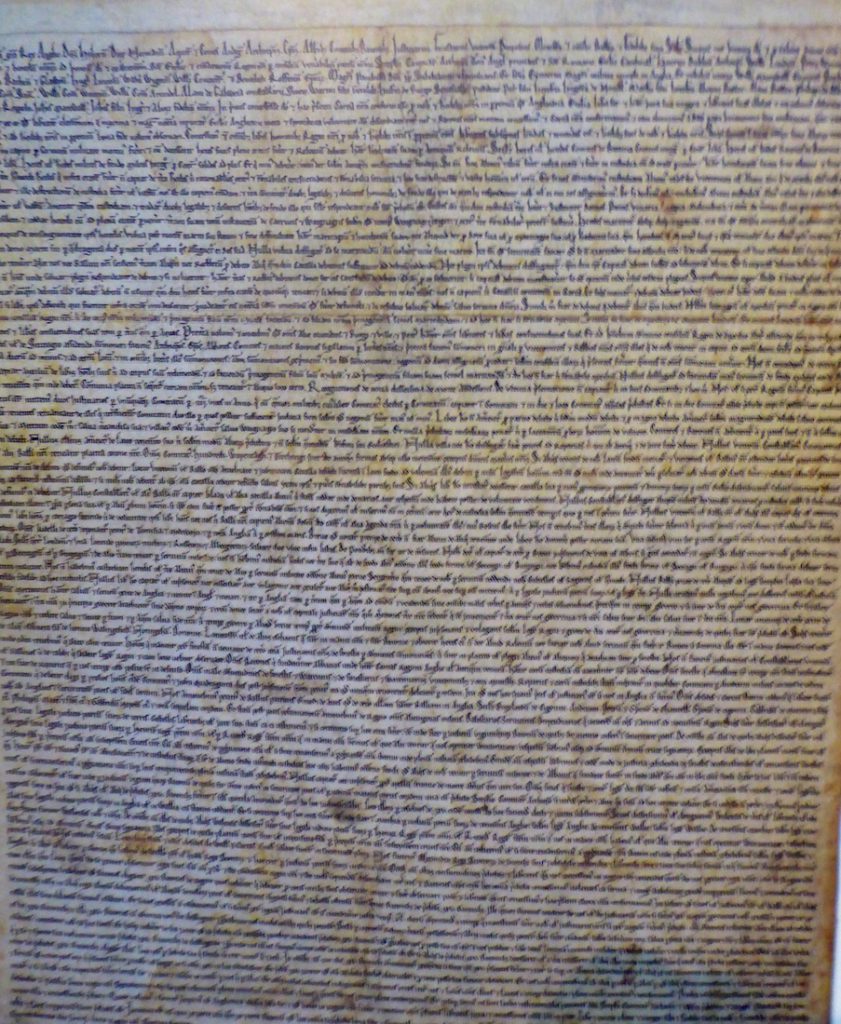 The significance of the Magna Carta

A powerful and radical concept was thereby established namely that no King should act above the law. The Magna Carta became the test by which succeeding monarchs were judged. In 1225 Henry III issued a revised Magna Carta and by 1297 it had become a firmly established part of English law.

The Magna Carta, has left fundamentally important legal legacies throughout the world. Four of the original clauses are still part of English law today, three of which establish individual freedoms. The Magna Carta was the foundation for the jury system, where court cases are decided by ordinary people and it also established the right to take a government to court should the law be felt to be unjust or being unfairly applied.

So my trip to Salisbury was one of fascinating discoveries! Like I said last time, don’t miss the chance to visit it if you are in the area click here to visit its website for details. And as one of you so kindly wrote to remind me, if you would like to learn more about this incredible piece of English History,  ‘Sarum’ by Edward Rutherford and ‘Pillars of the Earth’ by Ken Follett are great epic sagas to read.

Next time, at the request of so many of you we return to Provence and more about my house in Lourmarin, I promise!! 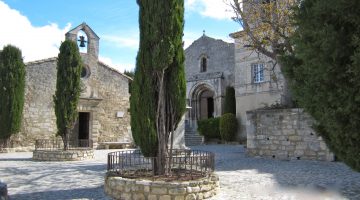