I am delighted to share my recent interview with Carolyne at Perfectly Provence about my World War II novel, The Sunflower Field:

Inspired by her expat experiences in the South of France, Caroline Longstaffe began writing her blog “Shutters and Sunflowers” in 2012. Her stories transport you from the United States to Provence, with the occasional dispatch from the United Kingdom. Longstaffe’s articles, provide readers with well-researched “Travel Tips from an English Girl in California, in love with Provence.“

Since 1999, San Francisco has been home-base for the Longstaffe family. However, once their children were pursuing advanced study programs in Europe, it seemed like the time to explore the couple’s dream of owning a house in the South of France. Although they spent 18 months between Uzès and Lourmarin, they did not come away with a new home. However, did have a deeper enthusiasm for the area. Read the full backstory here.

On her return to California, Caroline Longstaffe had the germ of an idea for a novel. A book inspired by real World War II characters set in Provence. After, two years of research and writing she has finished the draft of her debut novel – “The Sunflower Field.”  The book combines Longstaffe’s background as a student and teacher of history, with her love of Provence. It may have been serendipity when Longstaffe discovered, through her mother, this historical nugget:

I was already familiar with the Polish cryptologists, Jerzy Rozycki Marian Rejewski and Henryk Zygalski and that they, contrary to what most people think, were the first people to crack the Enigma code, but I had no idea that they had lived in Uzès.

Caroline Longstaffe agreed to share some of the novel’s details with Perfectly Provence readers. “The Sunflower Field is their story, interwoven with a fictitious story set in 2010 about the solving of a second world war mystery.”

What is the Polish cryptologists’ connection with Uzès?

The Polish cryptologists first cracked the Nazi’s communication system – Enigma – in 1932 in Poland. They shared their intelligence with the Allies, in 1939, on the eve of World War II. Escaping the Nazi invasion of Poland, the trio went to Paris to join an Allied code-breaking group working closely with the British team at Bletchley Park. Alan Turing came from Bletchley to visit them in January, but by May with the capitulation of France, they fled again, this time to Algeria. A few months later the three Poles secretly crept back into southern France arriving at Château des Fouzes in Uzès. Here, they continued their vital work (decoding messages from North Africa) for the next two years assisted by the Resistance. What spoke to you about this war era story?

During times of war, people are frequently called upon to do extraordinary things, finding inner strength, which they never realised they possessed. I have often wondered whether I would have been able to find such courage. What would I have done if I had been in the perilous situations they confronted? The bravery and fortitude of such people, especially those involved in espionage and the Resistance, within the enemy occupied territory, is both humbling and often inconceivable in its magnitude.

Weaving the threads of a story within such a rich tapestry, during the treacherous days of World War II was, in part, a way of exploring such ‘what if’ questions. As a historian, once I learned the story of the Poles, whose work was the foundation for one of the most significant contributions to the ending of World War II, setting my story during the war was enticing and irresistible. Can you describe your character, Collette?

Collette is an eighteen-year-old member of the Resistance. A young girl caught up in the horrors of war, coping with stressful situations. Someone with a steadfast determination to play her part whatever the cost, but at the same time still a young girl. At times struggling with the misery of her situation, with her raw emotions and someone, like most young girls, capable of falling in love. I hope that her courage and resolve leaps from the pages!

The code breakers were based in Uzès. What is the book’s connection with Provence?

Provence is the primary setting of the story. The Sunflower Field tells the cryptologists’ story interwoven with a fictitious story set in the present. When in 2010, Sophie’s father dies, she finds a letter written in 1944 which takes her to Uzès and then to Lourmarin. She finds herself unravelling a spellbinding wartime drama. A mystery involving a priceless art treasure and the indomitable Resistance, both of which prove to have connections with the present. The bulk of the narrative, set during the war and in 2010, takes place in either Uzès or Lourmarin. Provence is the stage for “The Sunflower Field.” How did you do your research for the novel?

As a student and teacher of history, the research was fascinating. The book takes places in two eras, the story of the cryptologists in 1940-42 and solving the mysterious letter in the present. For the World War II part, I have endeavoured to incorporate an account of what happened by introducing some fictional characters to facilitate the intertwining of their story within that of the present day.

Some of my research was done online and from resources such as the Uzès archive office. I also interviewed local French people who shared their genuine and fascinating stories. These have enriched the narrative by retelling real events. My desire is that in addition to revealing the truth about the Polish decoders, “The Sunflower Field” will deepen the understanding of life during the Second World War by the sharing of these incredible tales. What advice do you have for anyone thinking they might want to write a book?

Have a passion for your subject. Just as in any creative process, the biggest challenge is believing in yourself enough to keep going. Like many things in life, it is easy to abandon your dreams, and convince yourself that what you are trying to create is not worth the effort. Don’t allow that little bird called ‘doubt’ and her twin sister ‘fear’ to land on your shoulder and stay there. If you have a passion for what it is you are trying to create you will succeed in finishing your project.

As much as I would love my book to become a best-seller, and I have the cast for the screenplay all picked out. If that never happens, I have a sense of accomplishment in knowing that I didn’t give up! I have written a book, and even if it isn’t that good, I did it. It is my debut novel, and I am sure I have much to learn. But how do we learn, if not by the actual doing. Maybe what I learned next will help me with the sequel.

How did you land on the title for your book?

As you know, my blog is called Shutters and Sunflowers. Because those wonderful French shutters and endless fields of sunflowers are two things that come to mind when I think of Provence. I didn’t plan to choose a book title to connect it to my blog, the title found me…

We look forward to reading “The Sunflower Field” to discover more about the brave Polish code breakers, Collette and Sophie. Read more of Caroline’s blog posts and travel tips here. 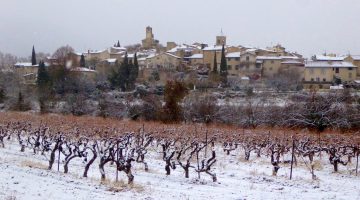