On July 21st, the Tour de France 2017 wound its way between the rocky escarpment of the Combe de Lourmarin descending into Lourmarin to a thunderous applause, no-one more enthusiastically cheering for our fellow Brit, Chris Froome, than us! 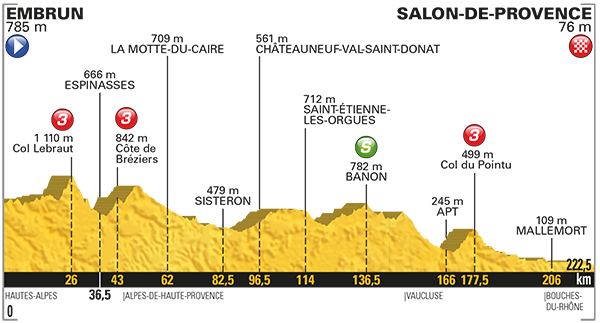 The day, Stage 19, was the longest of the entire race. It started in Embrun amidst the plateaus of rolling lavender in the Hautes-Alpes and was classified flat, despite the three Category 3 climbs. The 222.5km route passed through the Vaucluse and the Bouches-du-Rhône to its destination in Salon de France.

All week, around the local area, road signs had announced the event and road closures. 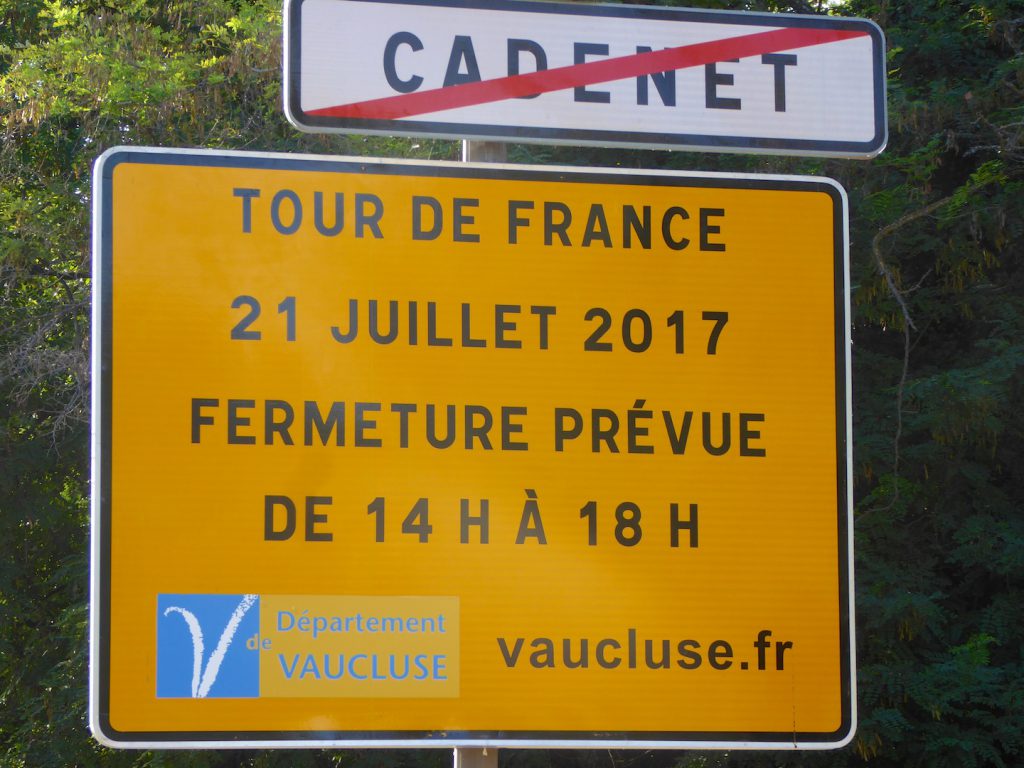 And on the day the excitement in Lourmarin was palpable! 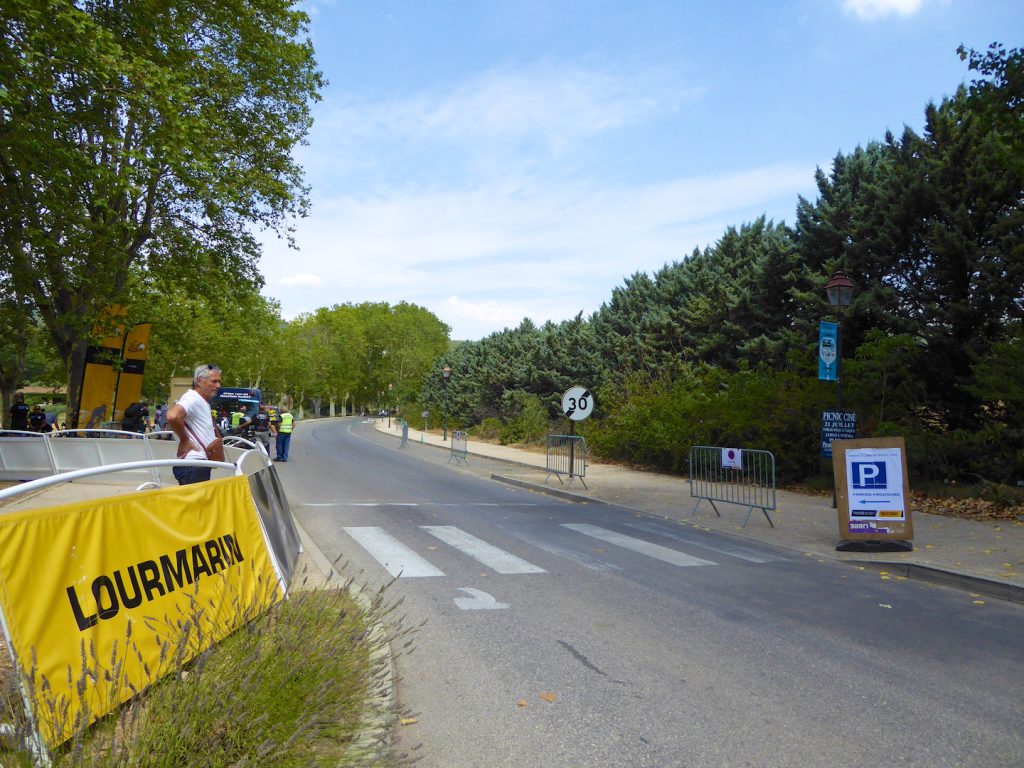 To the delight of the tourists, the Friday market was trapped all day and celebrated local artist Gerard Isirdi, had been busy with his brushes. 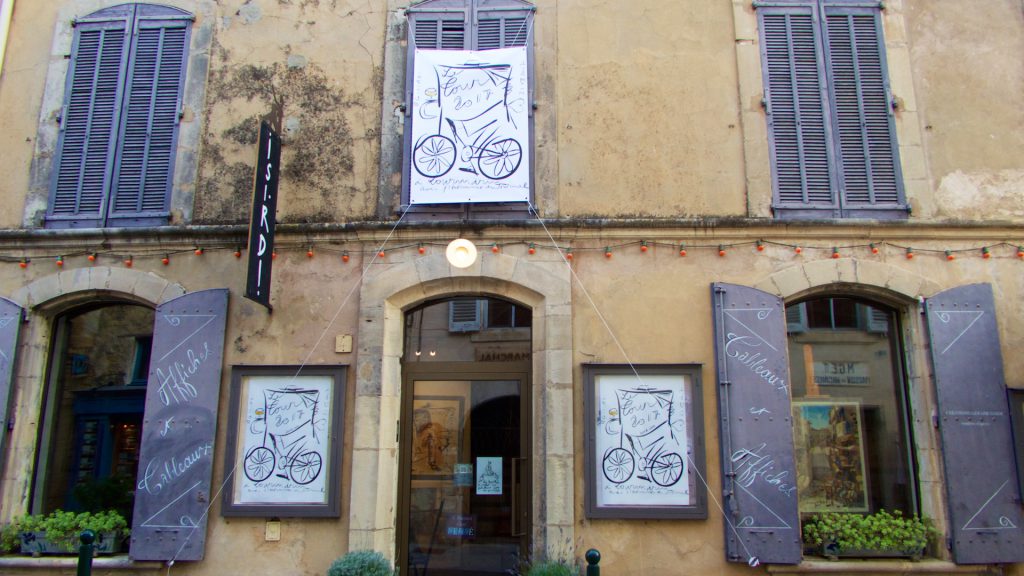 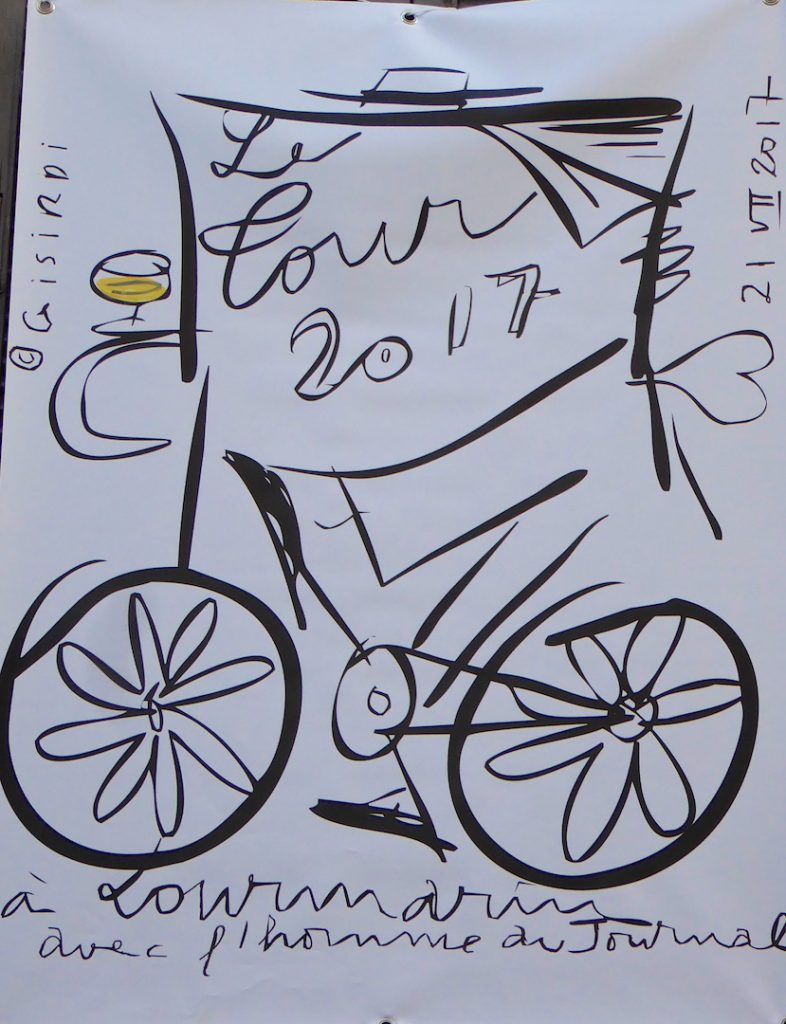 As people grabbed their hats and souvenirs, by about 3.00pm the route was lined with expectant fans from all over the world waving flags in excited anticipation. 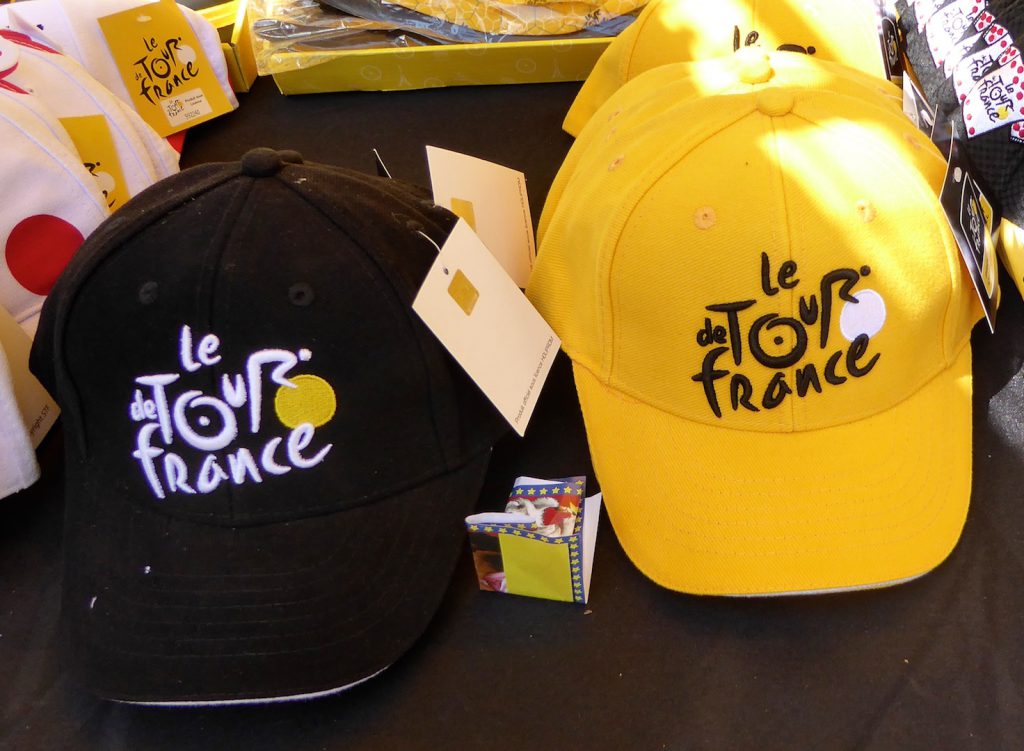 The first to arrive was the caravan, having departed Embrun at about 10.00 am it blazed the trail for the competitors entering Lourmarin just after 3.30pm. 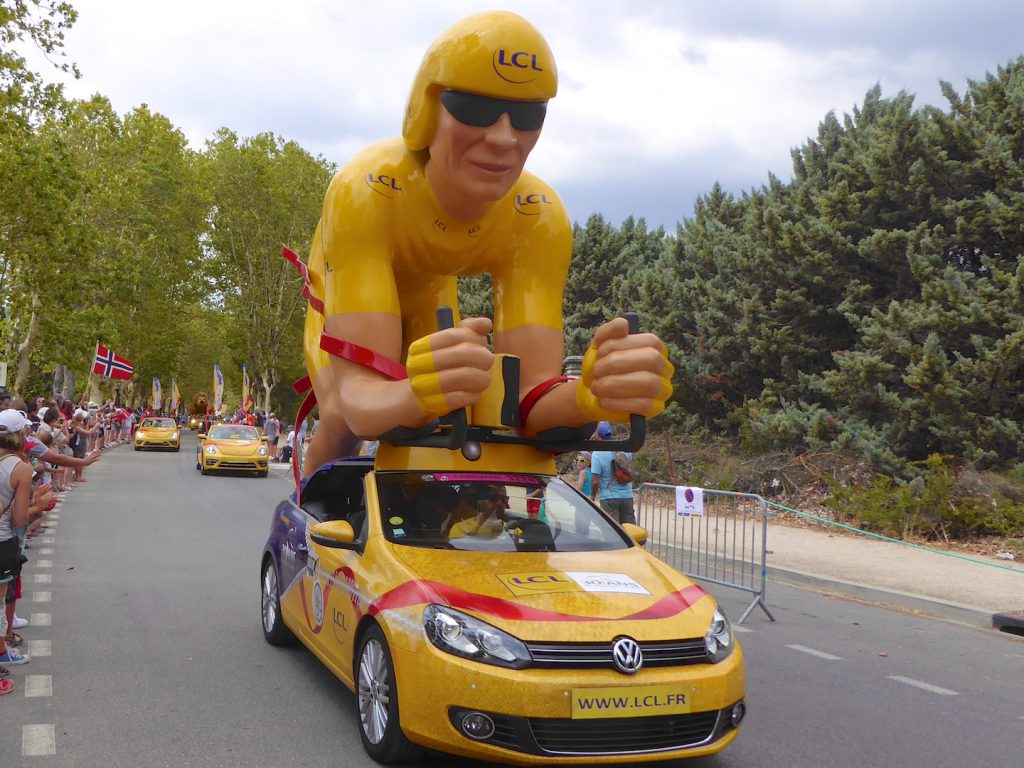 Tiny gifts were scattered along the road, rapidly grabbed up by gleeful children and some not so little ‘children’! 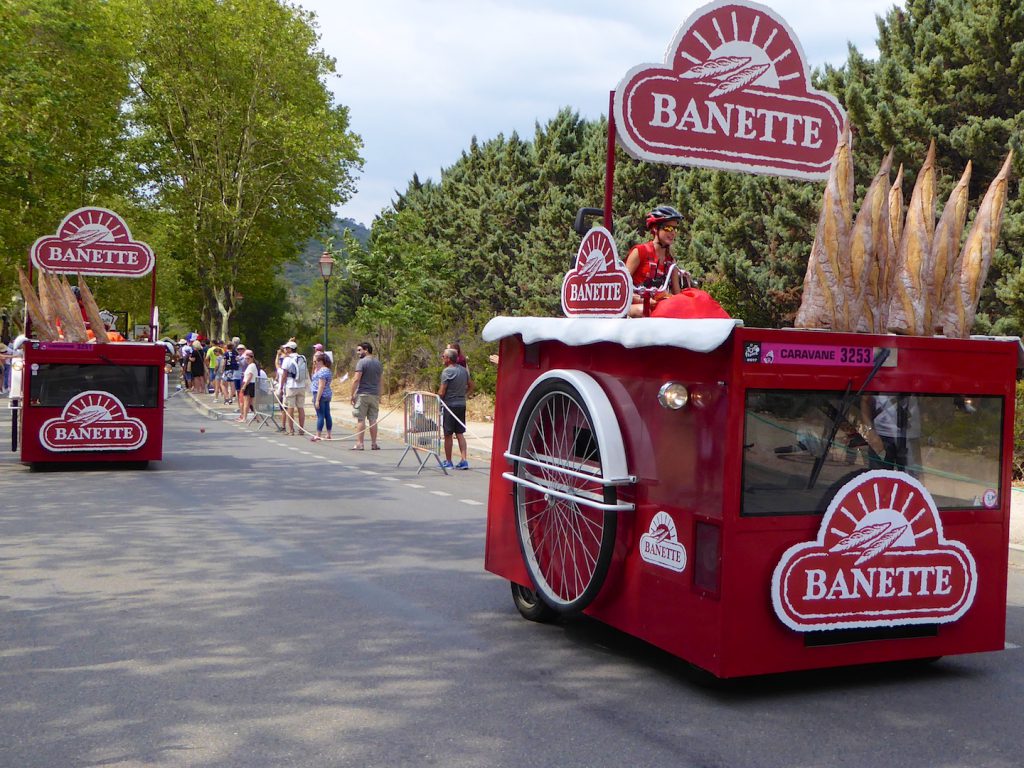 On and on it went, a colourful array of promotions, high pitched, rapid French voices, tooting claxons and whipping the crowd into a frenzied delight! 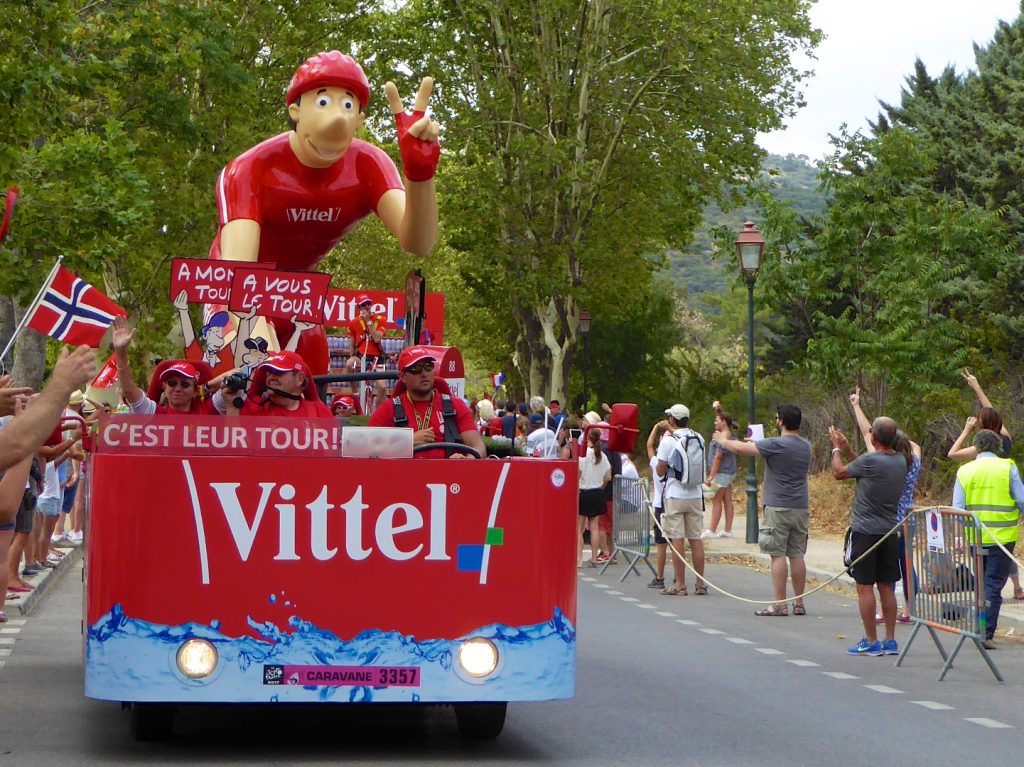 It was nearly an hour later before the humming blades of a helicopter could be heard announcing the arrival of the breakaway group. 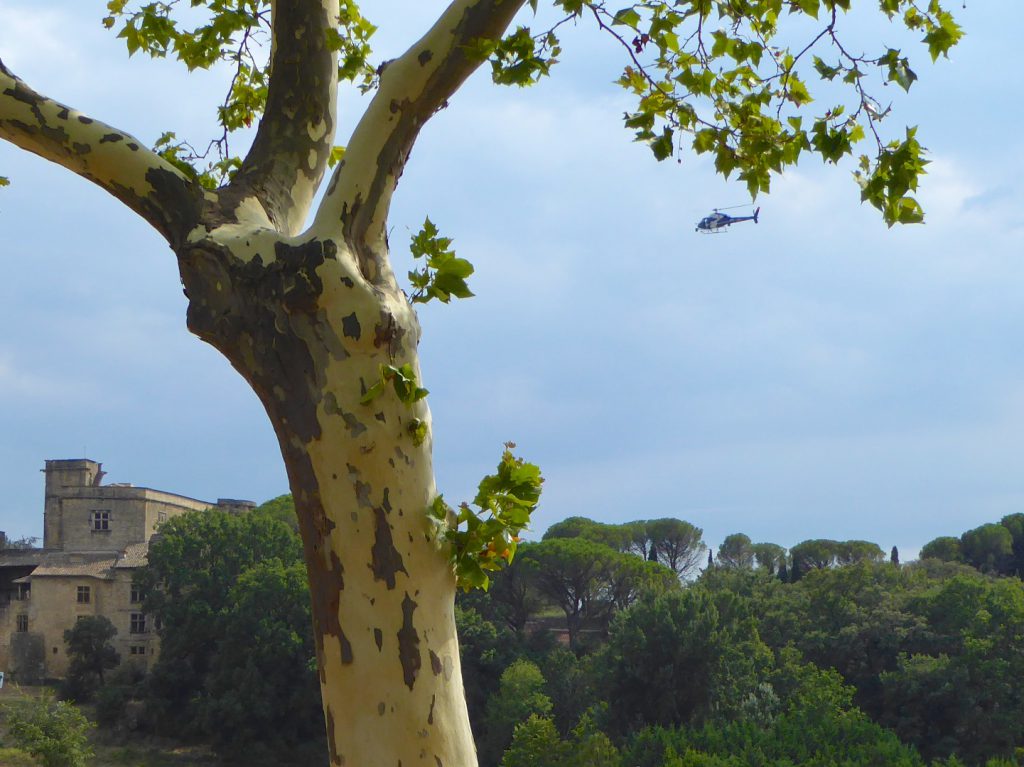 On the ground the crowd was ecstatic as a good fifteen minutes ahead of the peloton, the breakaway group became visible steaming round the corner. 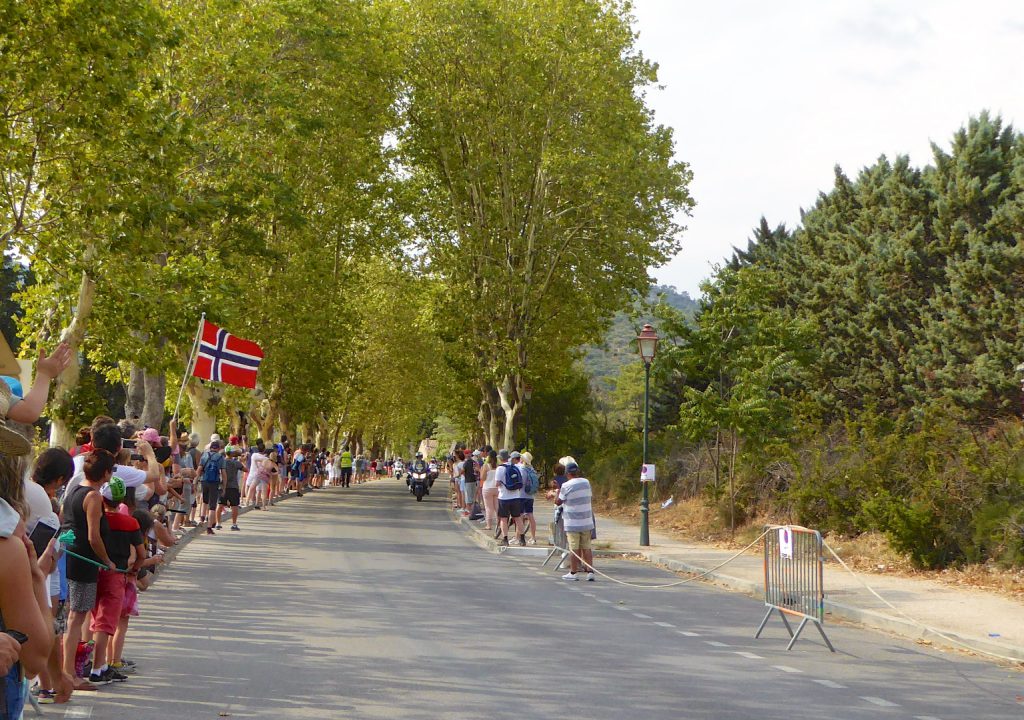 Just a preview to the main event, a short lived quiet descended and then one again the sky became full of the chattering whir of helicopters, their camera crews busily trying to encapsulate every highlight to broadcast round the world.

Suddenly the peloton was there, bicycles, helmets and taut muscular bodies speeding by the patient, adoring spectators. 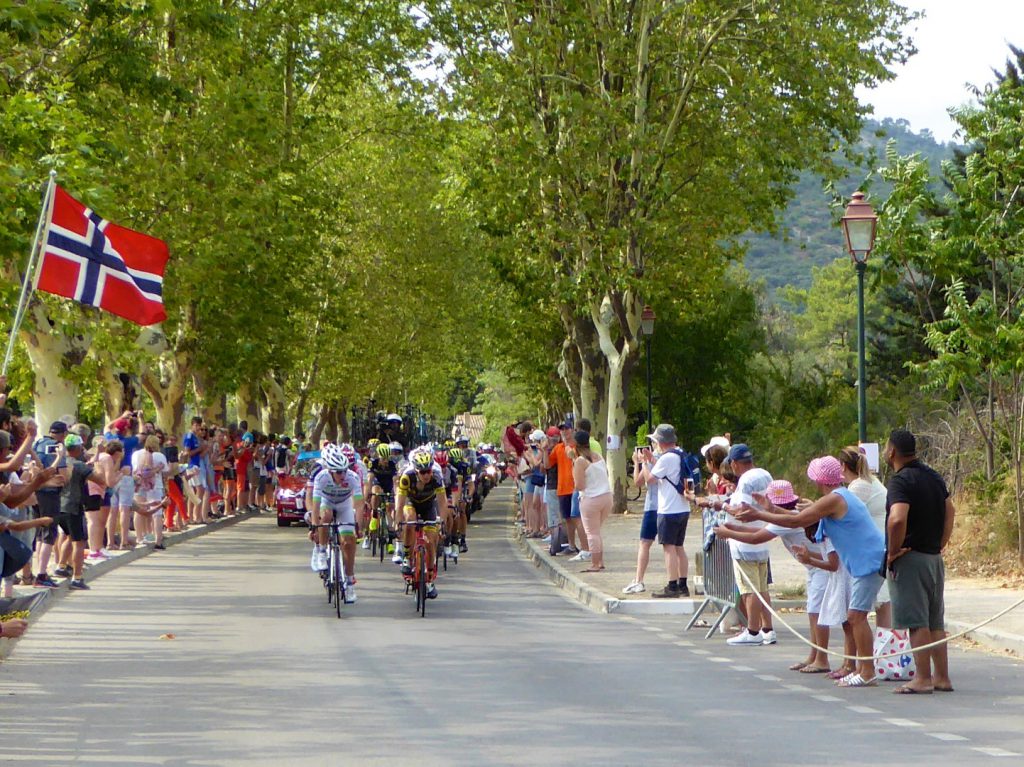 In a blink of an eye it had passed, as quickly as it was there it had gone. 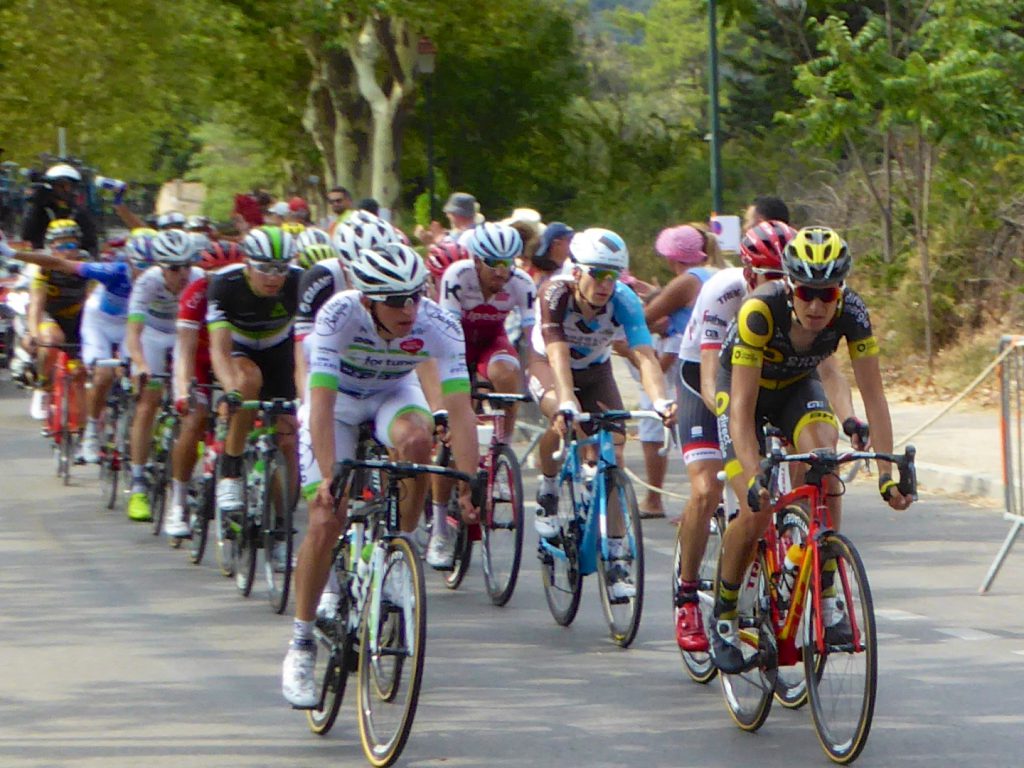 Fueled by adrenaline and grit, egged on by the exhilaration of its supporters, those determined, lean bodies sped on to complete the final 50km of the day. 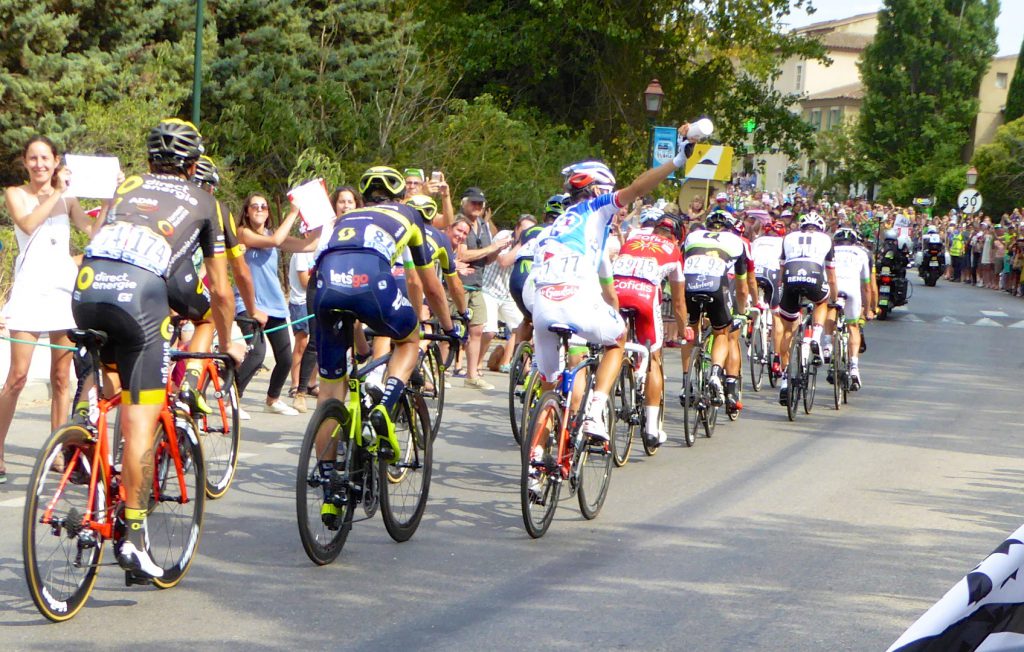 A long stream of the tour’s entourage followed, spare bikes, tools and medics! 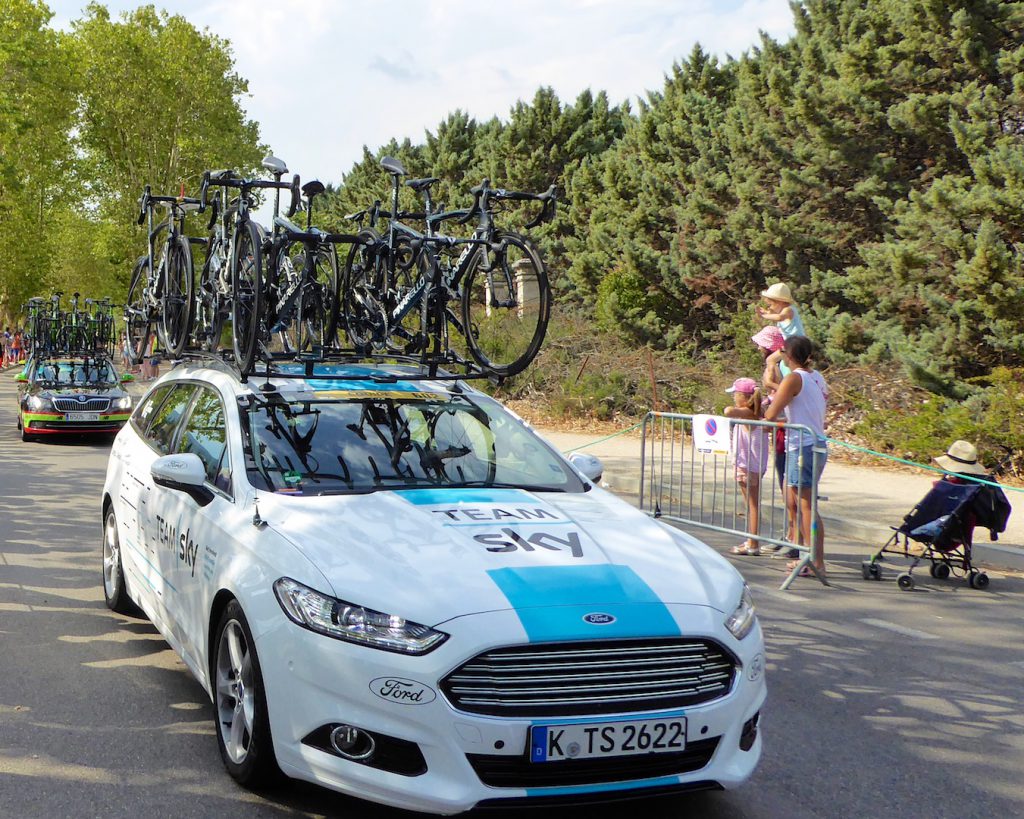 It took the race closer to Marseille for the following days’ Stage 20 time trials and then to Paris where Chris Froome made another victorious win! 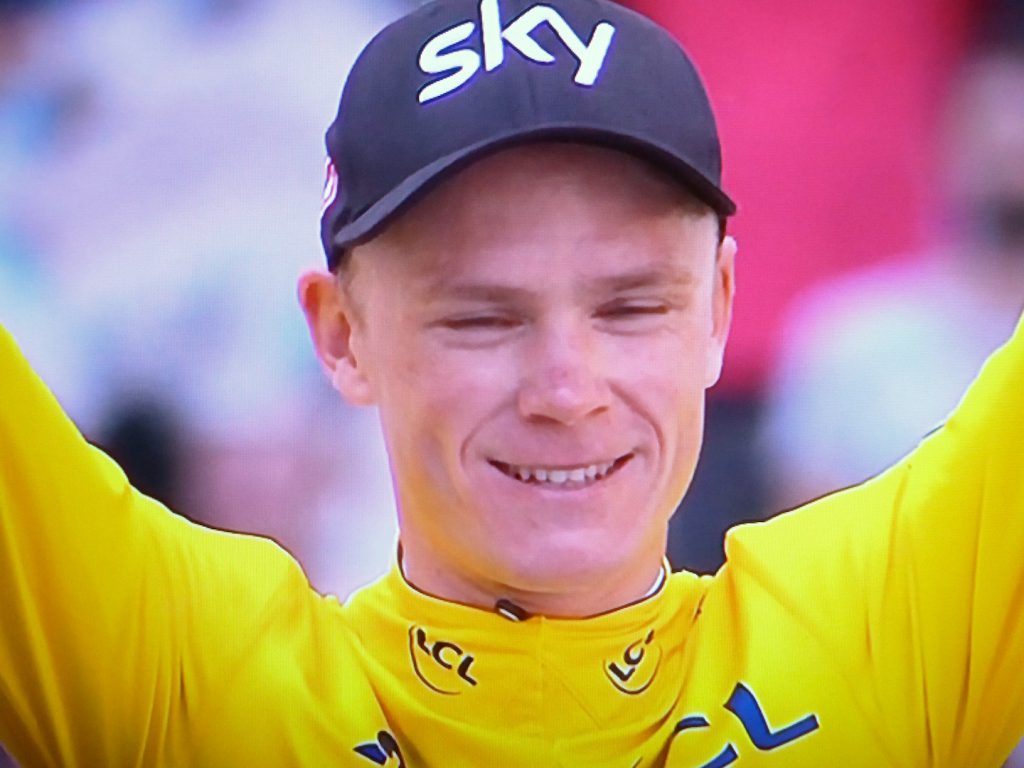 Seeing the Tour de France happen before our eyes really deepened our admiration for these incredible athletes. Their fitness and endurance was mind blowing. No matter how spectacular the coverage of a sports event is, there is no substitute for being there. The thrill of watching an event as it actually happens, immersed in the crowd and the atmosphere was an unforgettable experience.

Maybe you, like us, were lucky enough to see Tour De France 2017 too, perhaps on a different stage? Do let me know! 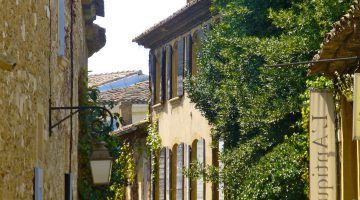 Why you should visit Lourmarin, this treasure of the Luberon