We continued our exploration of the Aveyron, weaving our way through the lush countryside with its deep red earth. We stopped off in more of the region’s story book villages, (all one of ‘Les Plus Beau Villages de France’ ) where we unravelled a little more of the remarkable history of this lovely part of France. An hours drive north of our hotel, Château de Labro, we visited the medieval village of Conques and gazed in wonder at the gold relic of Saint Foy. The following day, traveling south back towards Montpellier, we found ourselves surrounded by the hills and gorges of the Tarn in Le Parc naturel régional des Grands Causses, a stunning UNESCO parkland. Here we sampled it’s famous  cheese, made in the park’s nearby caves. Our final stop was a step back in time where we learnt the fascinating story of the Orders of The Knights Templars and Knights Hospitaller.

Salles La Source is a picturesque village nestled in the foothills of the Causse Comtal. It clings to the cliff on over three stories winding its way up to meet a rolling plateau up on the higher elevations. 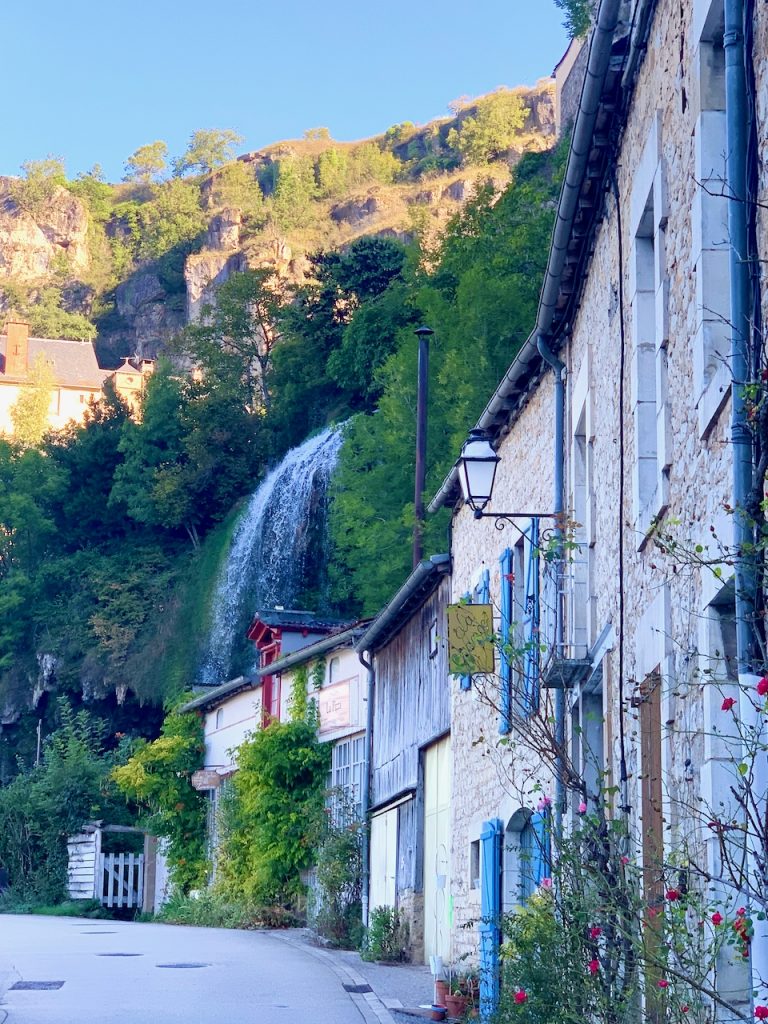 The Cascade waterfall is its famous landmark, uniquely situated in the center of the village. 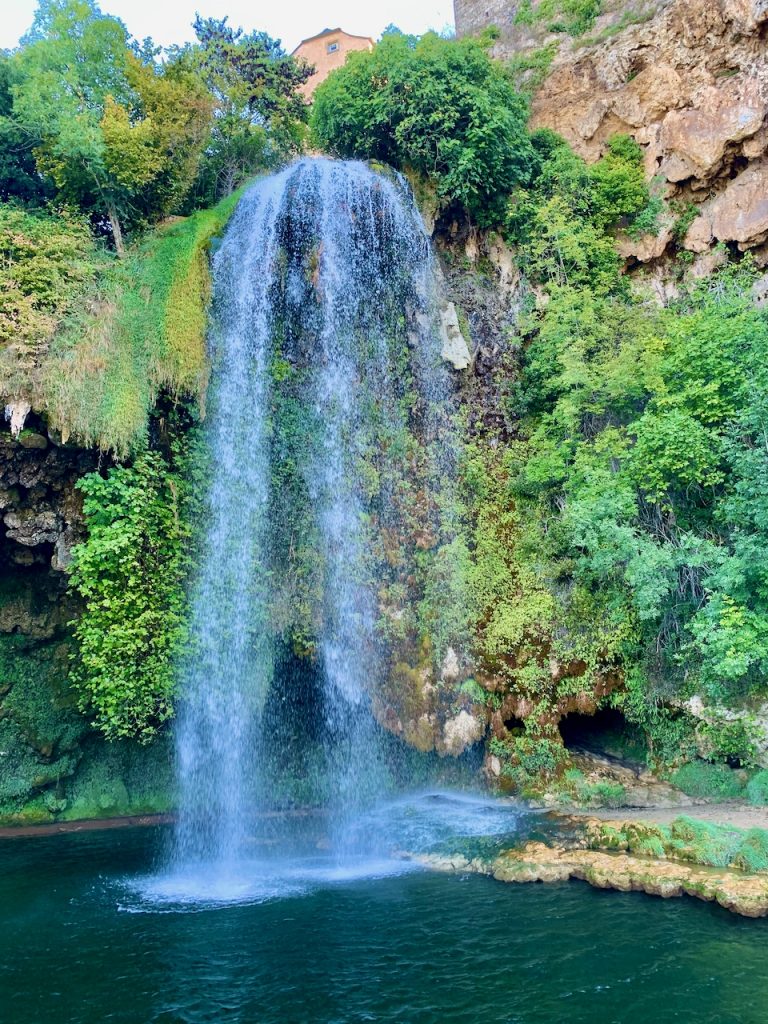 Conques is a simple, but breathtaking monastic village which tumbles over the edge of a wild gorge by the River Dourdou. As you wander its tiny streets it feels as if you’ve stepped into a fairy tale. 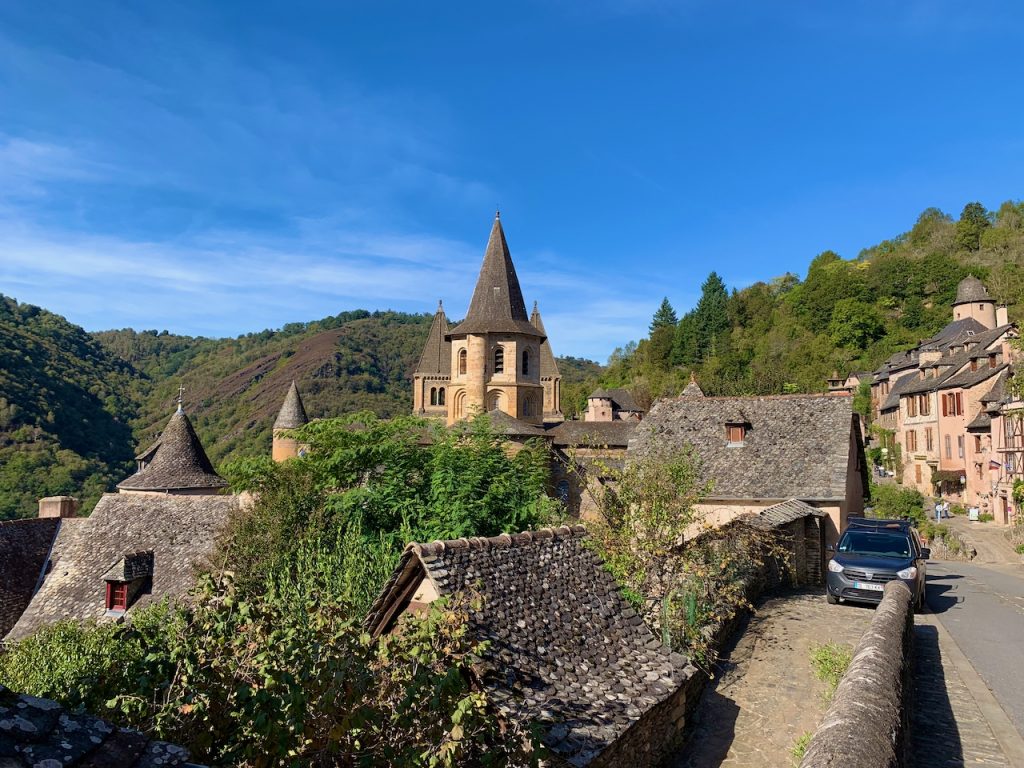 Narrow passageways wind their way through the village, 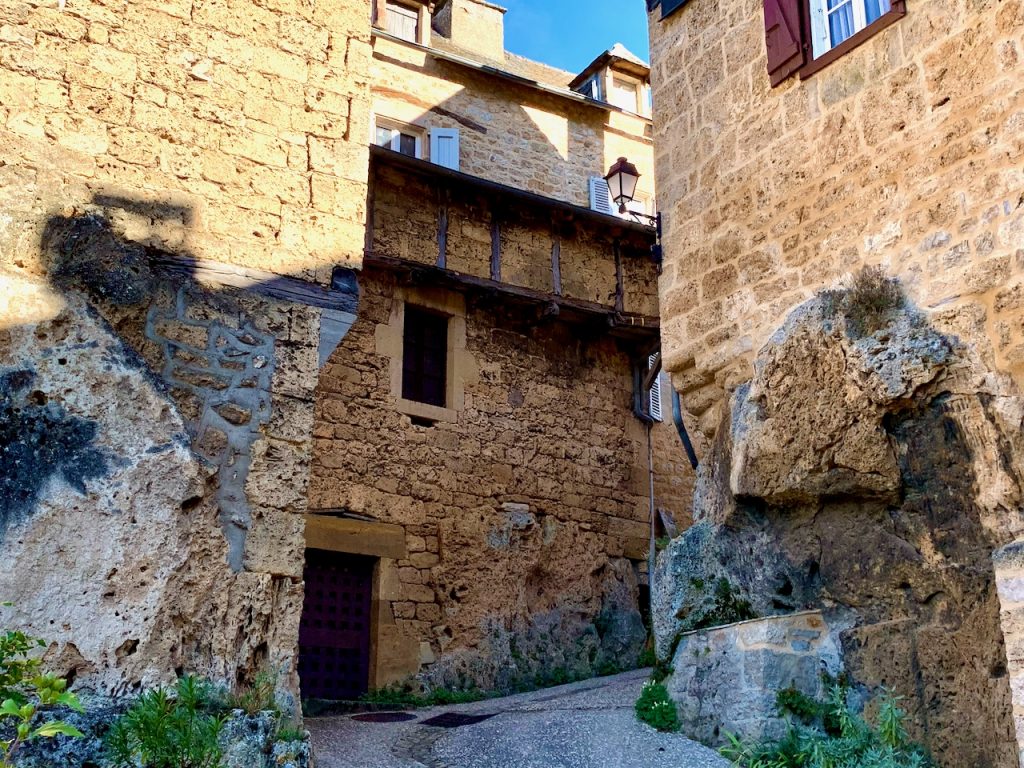 and steep cobbled steps lead you down toward the villages’s focal point, The Abbey of Saint Foy. 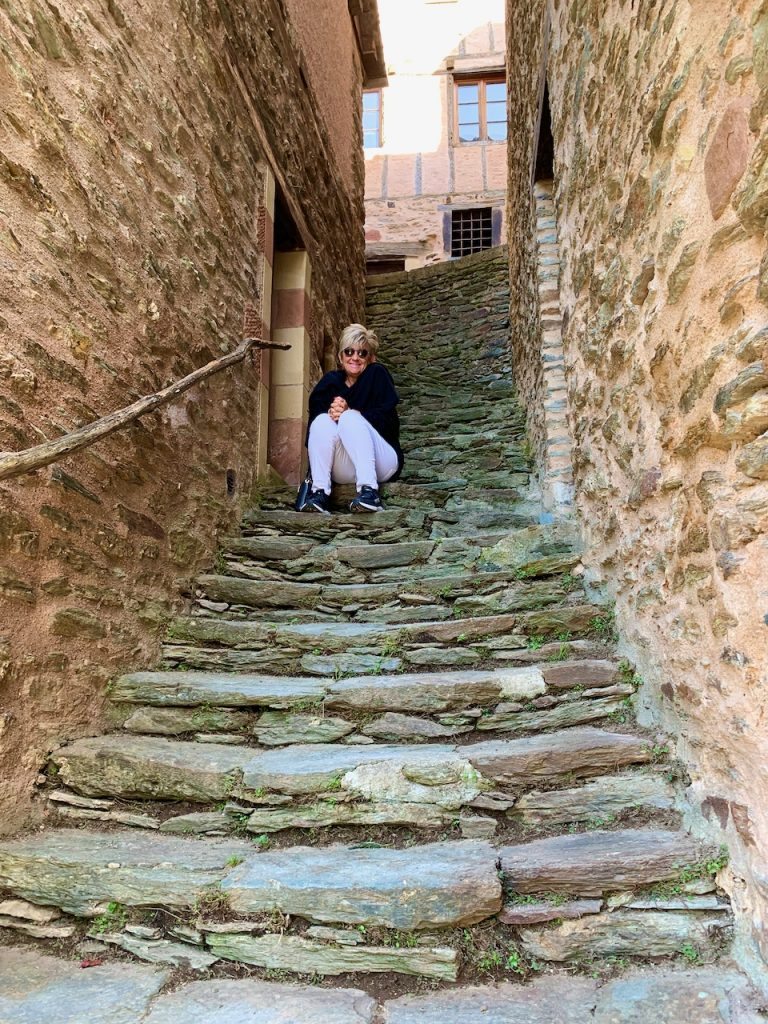 The Abbey of Sainte Foy, visible from every vista, is on one of the pilgrimage routes to Saint-Jacques- de-Compostelle, a Catholic pilgrimage to the Cathedral of Santiago de Compostela, Spain, the alleged burial site of the Apostle St James. 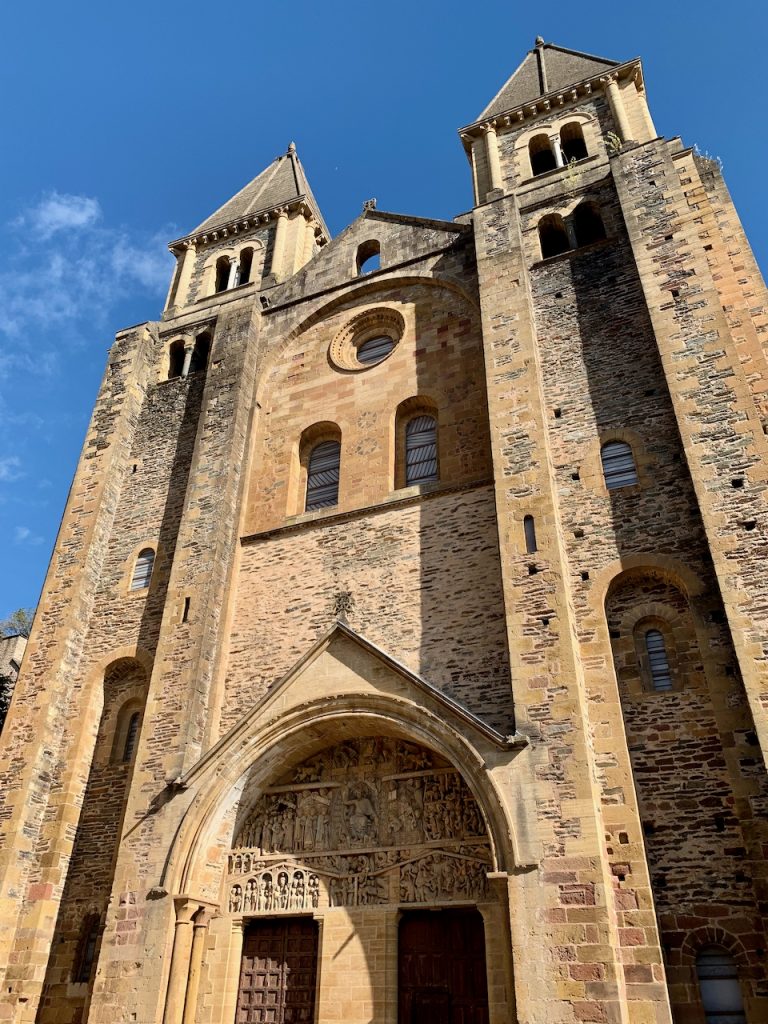 The hushed cloisters of The Abbey’s unadorned interior mystically adds to its magnificence. 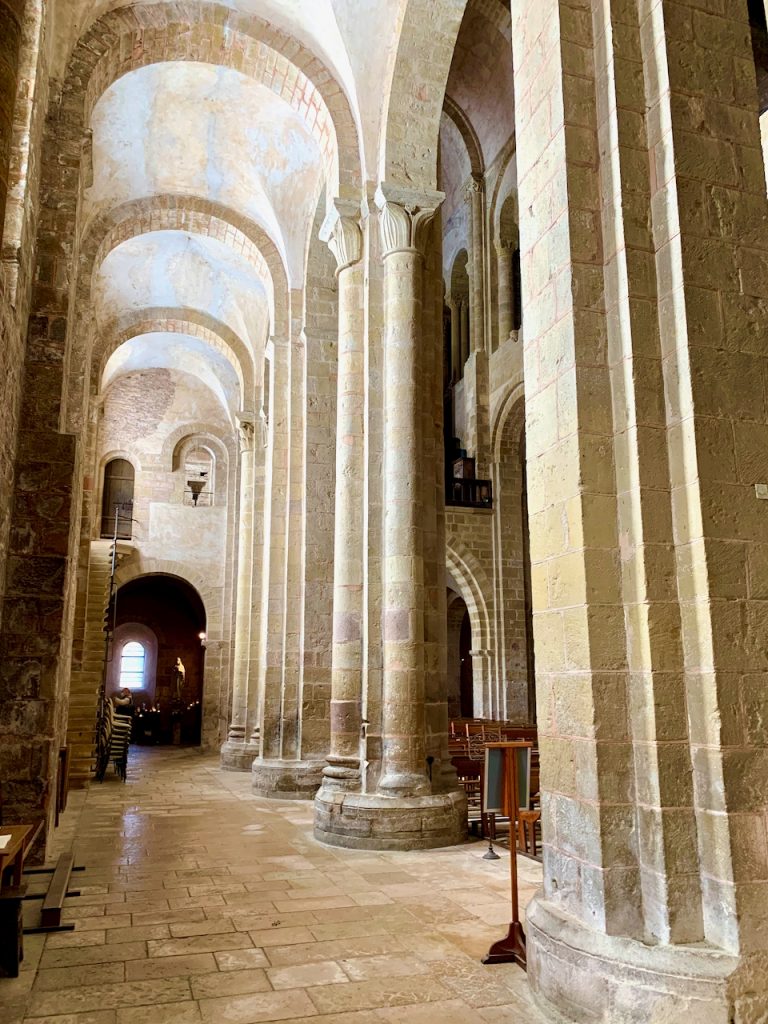 In the adjoining Abbey Chapter building rests ‘The Majesty of Saint Foy’, a masterpiece relic statuette. The dedication of relics was commonplace in the Middle Ages but this one is particularly stunning, well worth the small admission charge to view it. 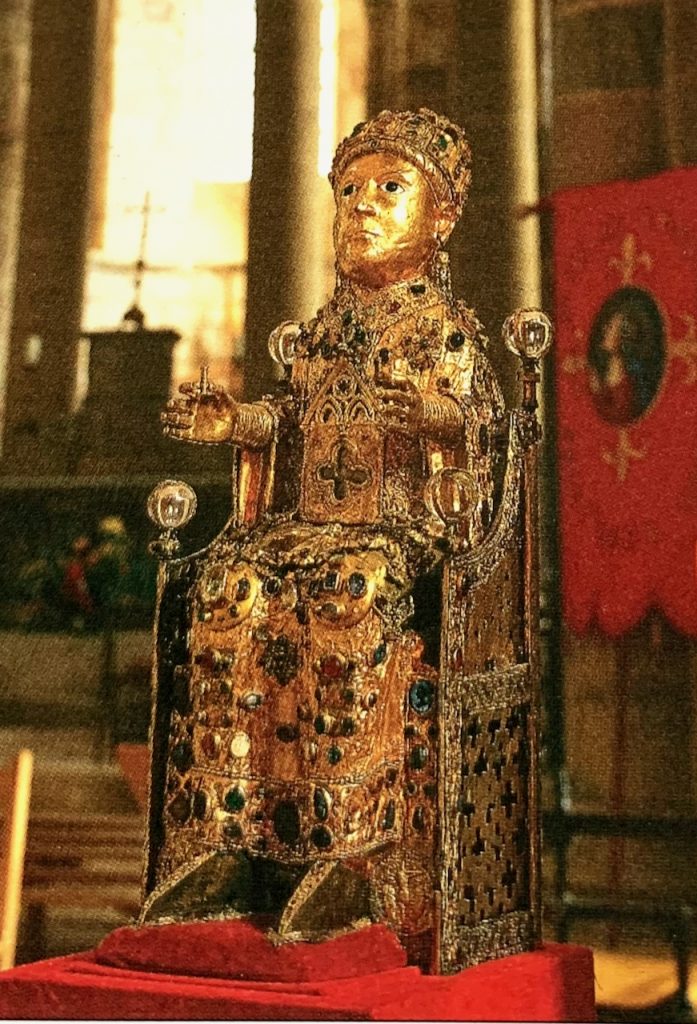 Only 85 cm high, ‘The Majesty of Saint Foy‘, is made of yew, covered with gold, gilded silver, enamel and set with gems. It enshrines the skull of Saint Foy, a twelve year old, Catholic martyr who was tortured for refusing to renounce his faith. Legend has it that in 995 a miracle occurred when a blind pilgrim prayed to Saint Foy and had his sight restored. Pilgrims subsequently flocked to visit the relic, which, in the 12th century led to the rebuilding of the original abbey. This was later replaced by the great romanesque abbey we see today. Every year, on the Sunday following October 6 (feast of Saint Foy), The Majesty of Saint Foy‘, is transferred from its exhibition place, next to the abbey  and placed inside the abbey itself.

Timber framed buildings line the small square outside the Abbey hanging from the street above it. 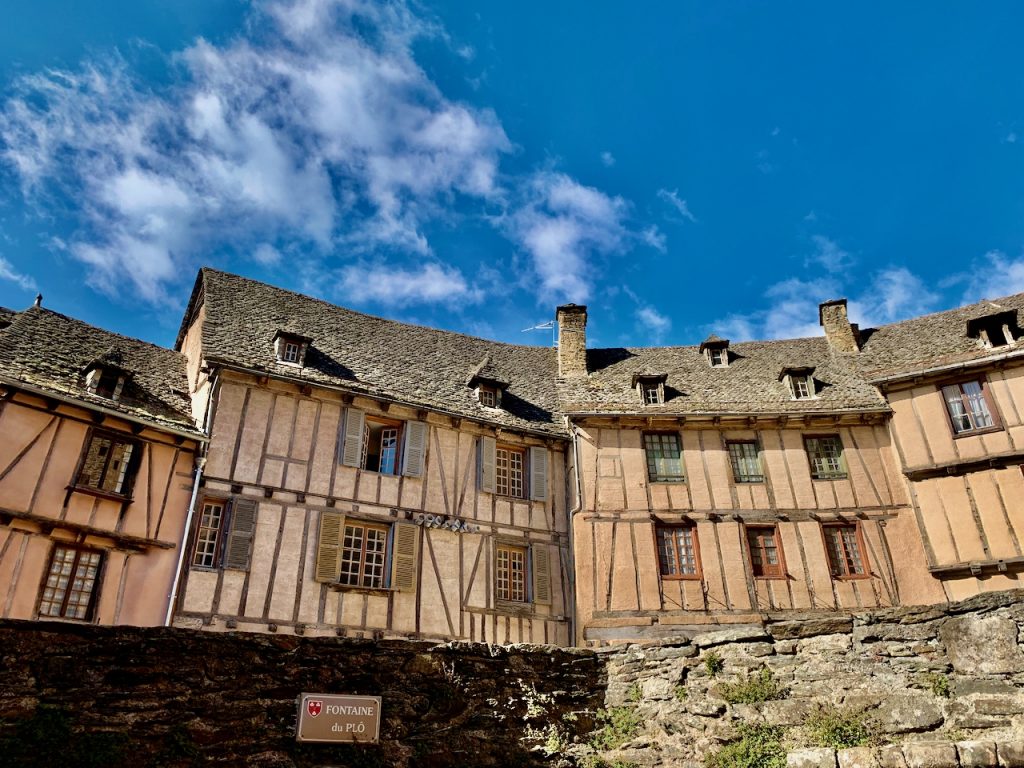 Conques was perhaps the most impressive of all ‘les plus beau villages’ we visited in the Aveyron, an impression perhaps helped by the delicious steak frites we enjoyed in the warm sunshine below the Abbey’s towering face. 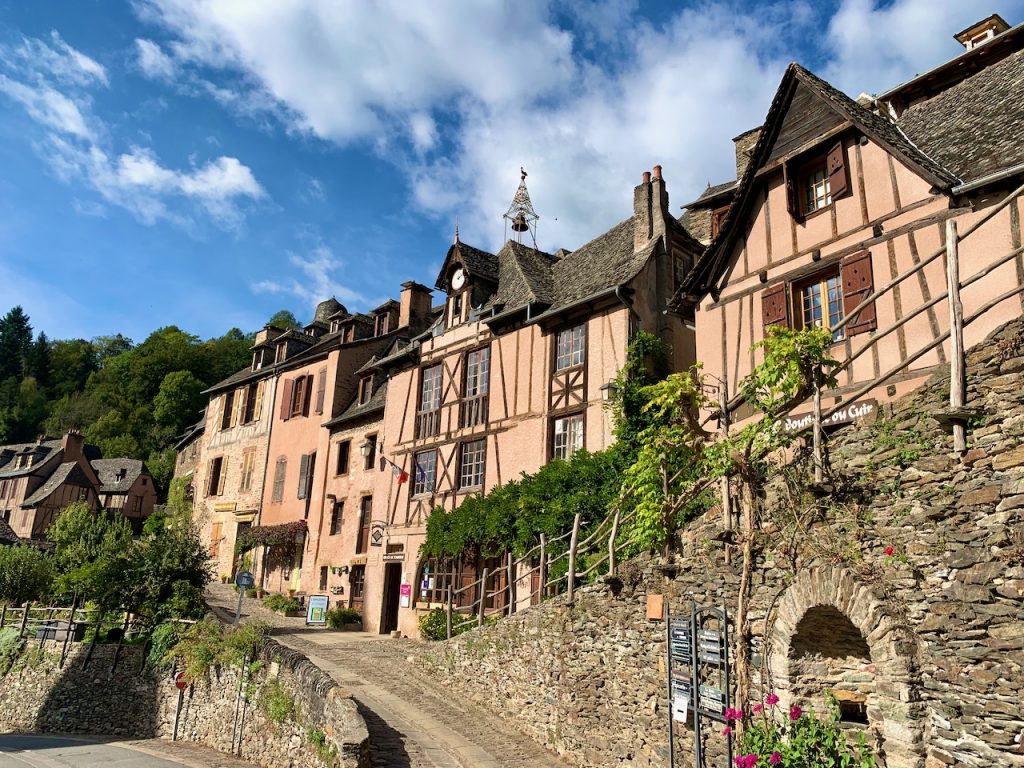 Dating back to the 13th century this veritable fortress, like others of its kind, was built to protect its occupants from local invasions and during The Hundred Years War, from 1337, from the English! 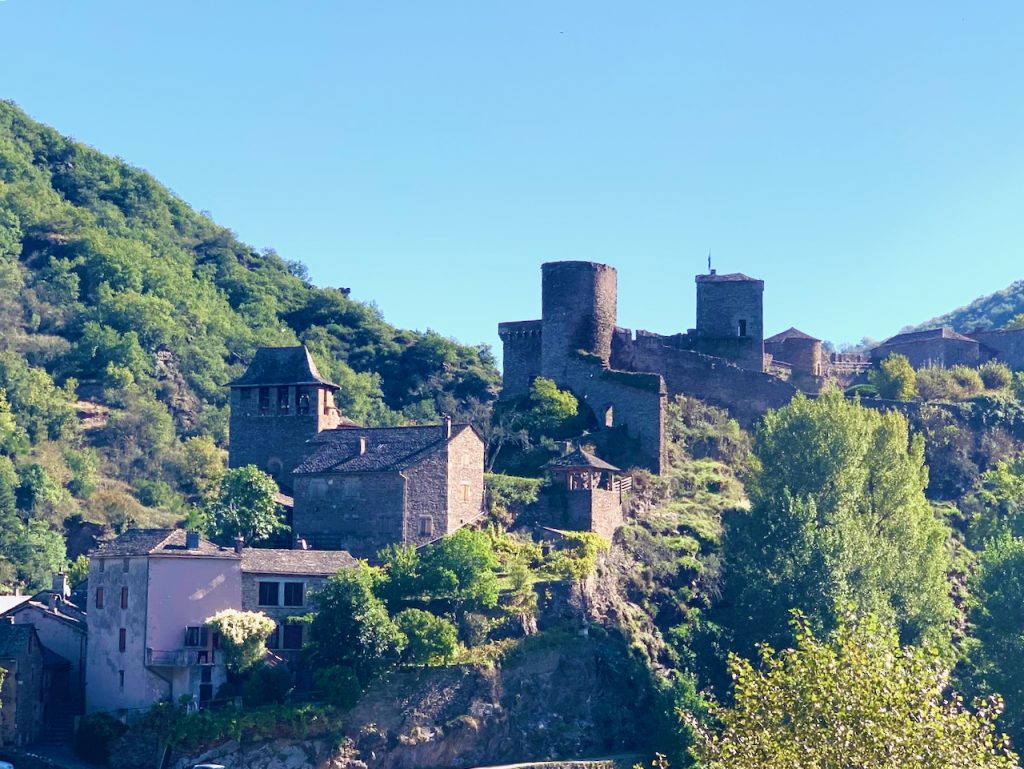 The keep and towers of the ramparts which remain in good condition, are fine examples of late fifteenth century architecture.

We wandered the surrounding streets, seemingly deserted despite the evidence that people still lived there.

The village shop was a wonderfully preserved example of a timber framed, medieval building.

Situated in the Grands Causses Regional Natural Park, at the foot of the Combalou mountain, are the caves used to ripen the cheese, Roquefort Société. 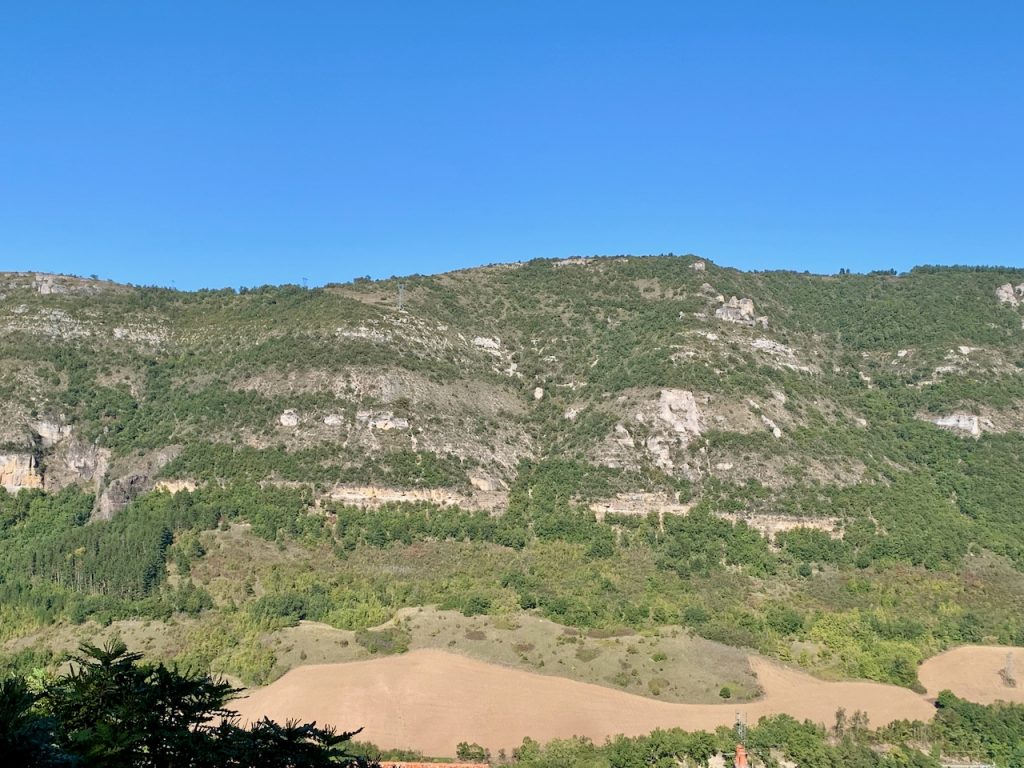 The caves were created over a million years ago after the mountain collapsed. Cracks, known as fleurines were left in these caves creating a natural thermal regulation. The caves were first used in the Middle ages, restored in the 17th century and then enlarged by the Roquefort Société, a brand created in 1842 which brought together fifteen local merchants and refiners.

Roquefort is made from the unpasteurized milk of local Lacaune Ewes between January and July. Reportedly, this creamy, blue veined cheese was discovered when a young shepherd boy left his cheese in one of the caves by mistake; when he remembered and came to collect it he found far from being ruined, the cheese had improved, the natural conditions of the caves had enhanced its taste. Today micro-organisms found in penicillium roqueforti are added to the milk before the cheese is formed. Roquefort Société is the only cheese maker that produces all its penicillium on site.

The caves are 11 stories high with fleurines on every level.

The cheese is ripened in the stone cellars which can holding up to 300, 000 loaves of cheese and as many as 1, 400, 000 in an entire season. The cheese loaves are placed by hand on the salted wooden shelves, the air being constantly renewed by the natural fleurines.

It is here that the penicillium roqueforti develops. The salt melts and is diffused and the cheese becomes creamy. Taking between 14-25 days, the cellar master plays a key role in the process.

All the attributes of this unique environment, the stone, the wood and wind from the fleurines, play an essential role in making the distinctive cheese we know today. 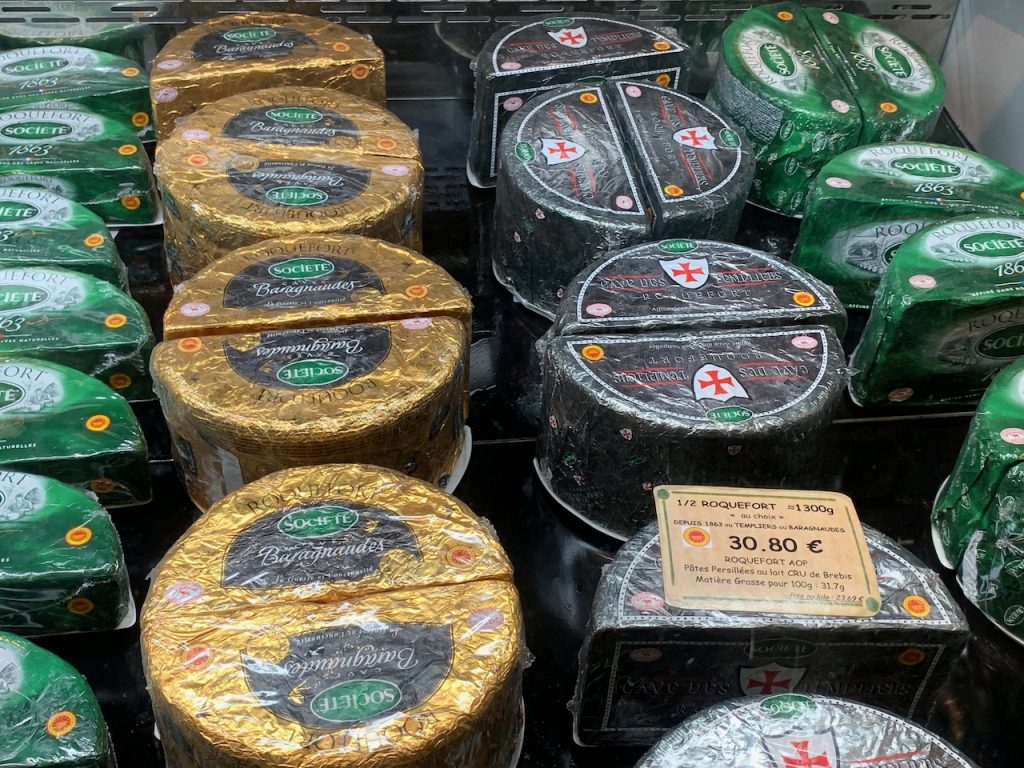 In 1942, the managing directors of the Roquefort Société, Léon Freychet and Jean Bosc, together with some others opened a ‘youth hostel’ in nearby Tendigues to hide people, weapons and supplies for the Resistance.

When the Village of Roquefort-sur-Soulzon was invaded on January 1st 1944, Bosc and Freychet escaped. Freychet was later captured and sent to Buchenwald Concentration Camp. He survived, and on his return from Buchenwald was instrumental in creating the company’s worker’s committee, a research laboratory and a training center for young shepherds.

La Couvertoirade in Larzac, the county of the Templars

Outside the village by the ramparts is La Cour Neuve (The New Yard), built between 1439-1445 during the Hundreds Years War. It was here that goods for the village were unloaded and through the centuries it was where the consuls gathered for public meetings. 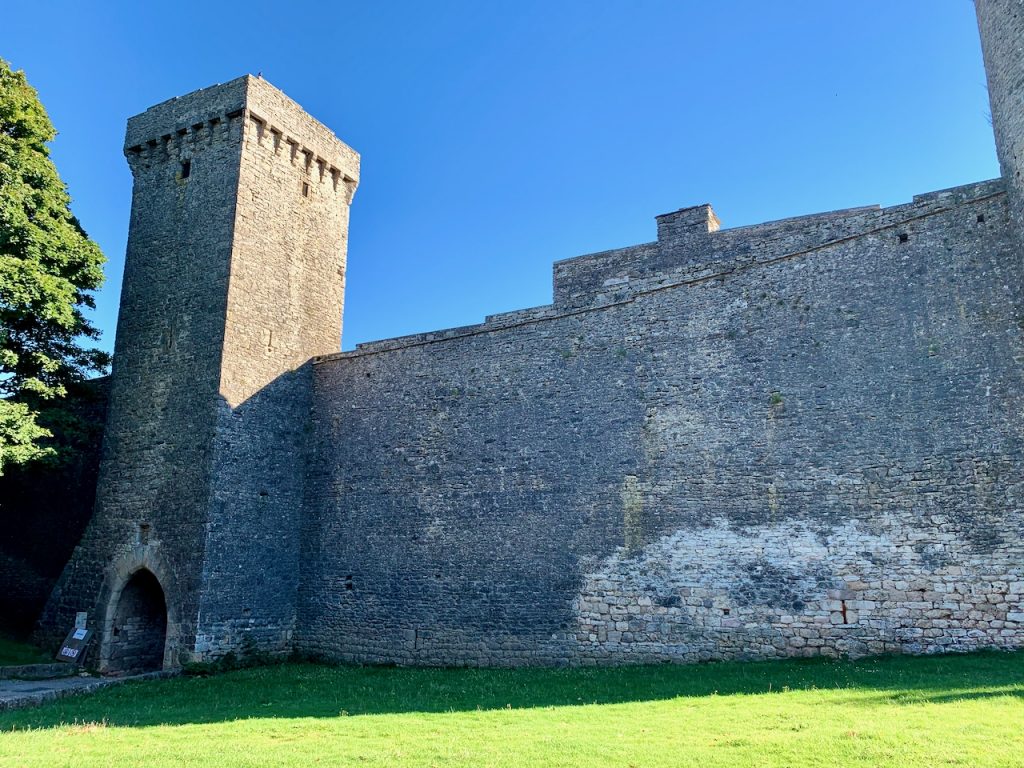 Entering the village under the archway, to then walk along the medieval streets, one is immediately  plunged back into the past. 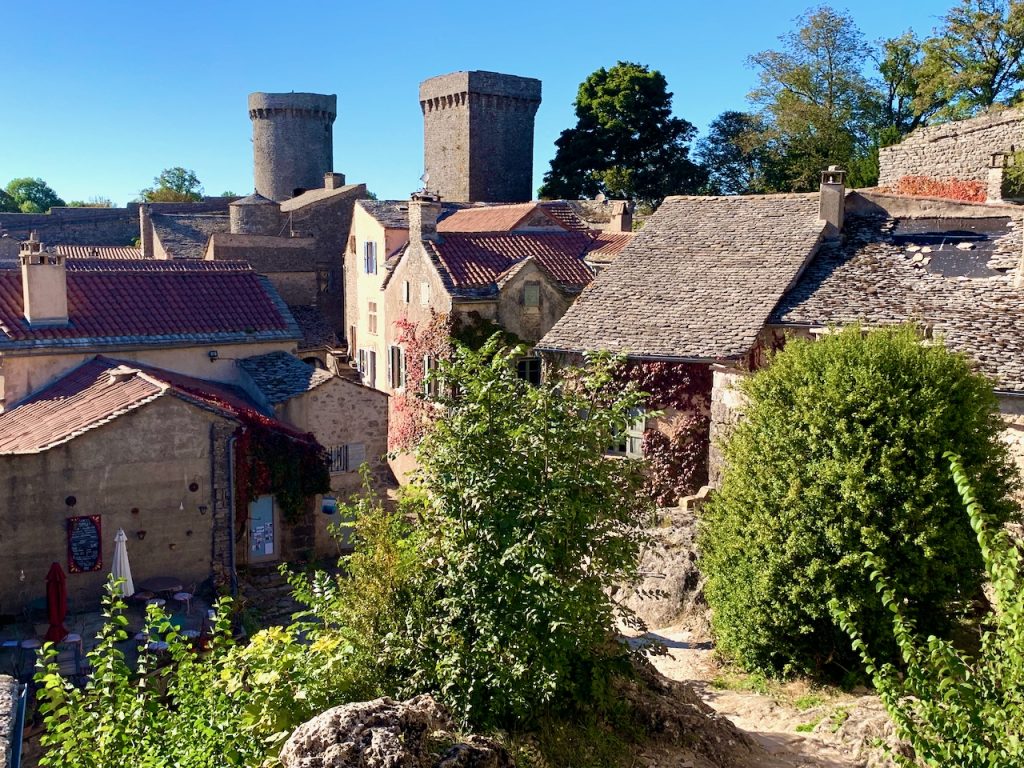 The Knights Templar were formed in 1118 by Hugh de Payens, a knight from the Champagne region of France to protect pilgrims traveling to The Holy Land. In 1128 the Treaty of Troyes gave them official approval and for 150 years they grouped together around settlements such as La Couvertoirade. The Order prospered acquiring land and many new noble members. But, in 1312, it was abolished by the Pope and all its possessions were given to the Knights Hospitaller of St. John of Jerusalem. 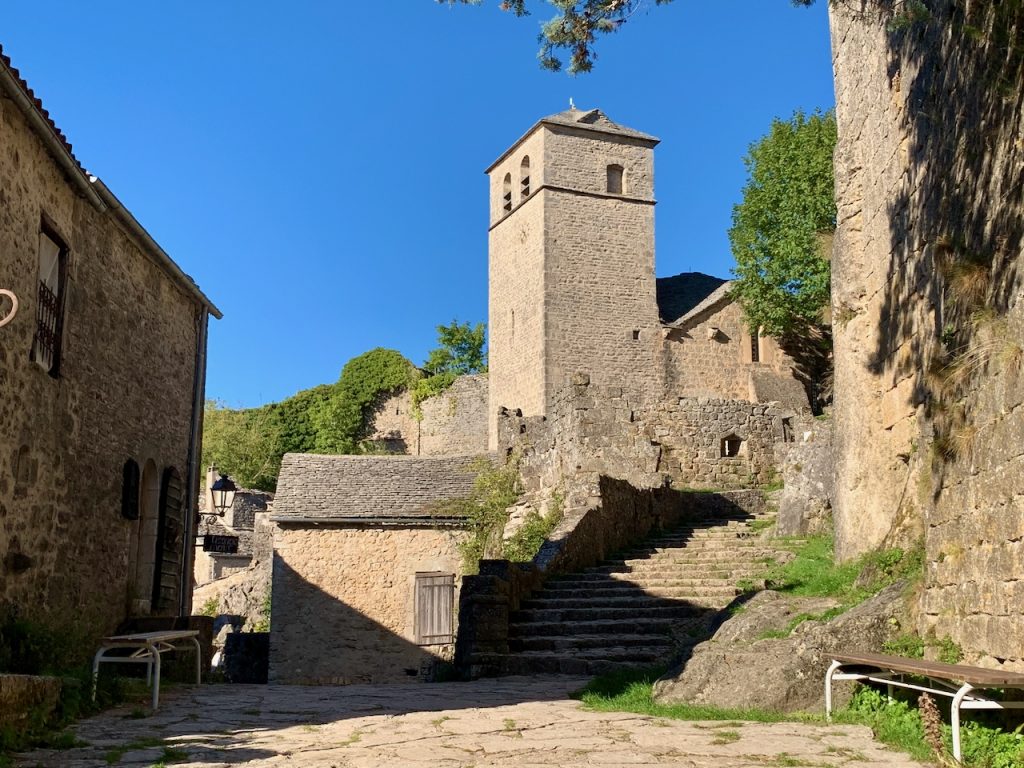 The Hospitaller were a military order established around 1070 to manage a hospital for sick pilgrims in Jerusalem. In 1310 they had become the Knights of Rhodes. They enriched the villages of the Larzac region until the 16th century when they were taken over by the Hugenots. From 1530 they were known as the Knights of Malta. They wore a black habit, with a white eight-pointed Maltese Cross. Some members later moved to Russia where the order collapsed in the early 1800’s. In the 1830’s the Order was restored in England and still remains today caring for the sick.

Our last stop in Larzac, the county of the Hospitaller, was Lodève where we visited St Fulcran Cathedral, a Gothic 13th and 14th century cathedral dedicated to St-Géniez and then St Fulcran.

Our trip ended in Arles back in Provence. An hour from home we stopped and eat dinner under the Roman arches of this beautiful city’s amphitheatre.  Inspired by the Roman Coliseum it was built in 90AD and is still in use today. So much history in this mystical part of France. 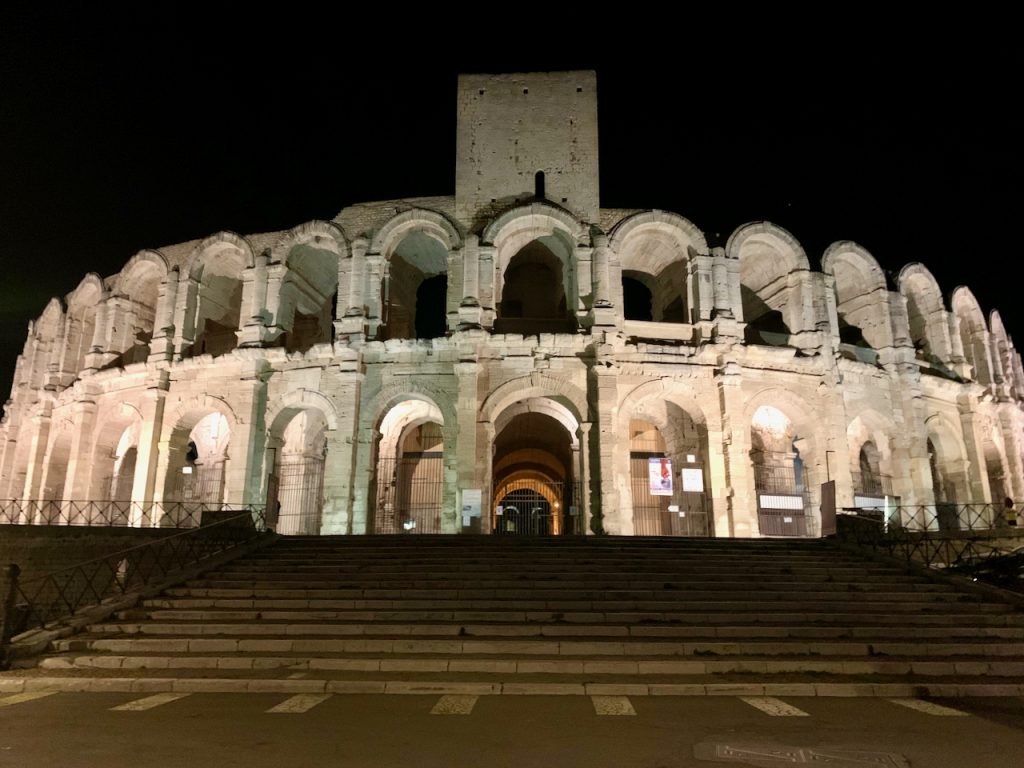 Previous Article A viaduct, fairy-tale chateaux and the medieval villages of the Aveyron 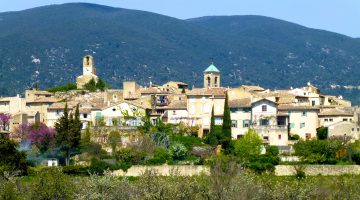