Artists have always been drawn to Provence, inspired by its’ striking beauty and the brilliance of its natural light which so illuminates this stunning part of France. For me, the artist who spectacularly showcases the radiance of the region, is Paul Cézanne. This year, Carrières des Lumières paid tribute to Cézanne. Its title says it all, “Cezanne Le Maître de la Provence”. The performance is an emotional encapsulation of the very essence of Provence and all that I love about it.

Carrières des Lumières: the art spectacle in a quarry

I’ve been fortunate to visit Carrières des Lumières almost every year since it opened in 2012. If you have not yet experienced its wonder, Carrières des Lumières (literally translated ‘Caves of Light’) is a musical, art extravaganza where the works of the Masters are splashed across the towering walls of a former bauxite quarry in Val d’Enfer.

The magic of Carrières des Lumières has now been transported across the globe in its dazzling Van Gogh production, Van Gogh La Nuit étoilée. But it began here, in Provence.

Carrières des Lumières is a short drive from St Rémy-de-Provence through a twisting, boulder strewn hillside between the pine trees where suddenly the magnificent ruins of a medieval château come into view. Hugging precariously to the craggy, limestone escarpment, it’s almost possible to hear the sounds of distant gunfire being fired from the ramparts over the perched village of Les Baux-de-Provence which tumbles down the hill below. 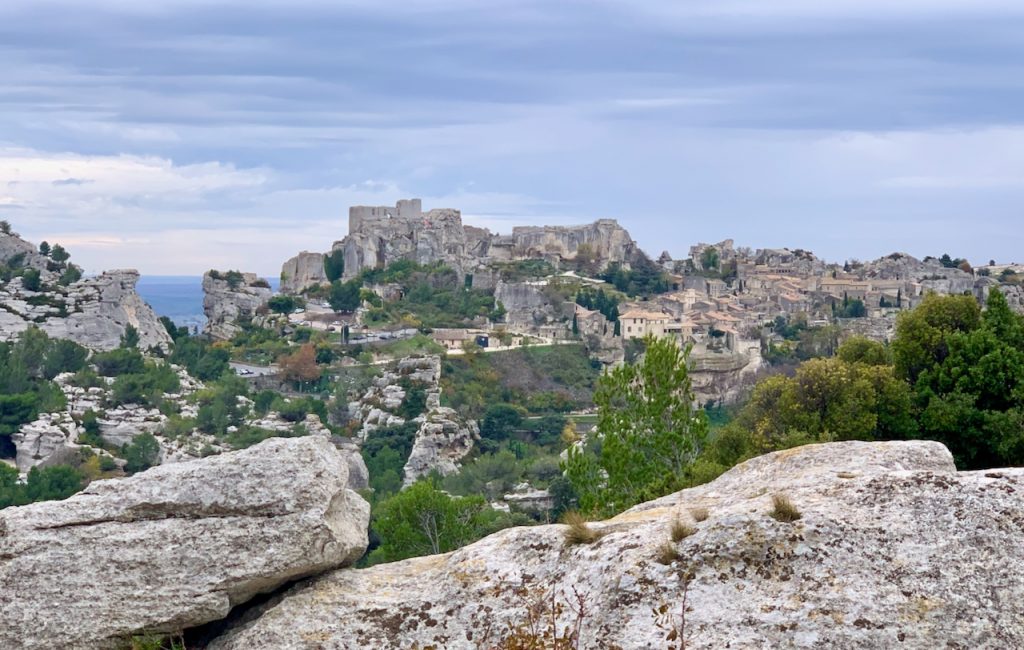 Carrières de Lumières is just a few hairpin turns further. Once inside the quarry’s vast, cavernous space, one is immediately entranced. Invisible paintbrushes sweep more than 2000 digital images of artistic genius across the 7000 square meters of the quarry’s walls, floors and ceiling. And this year it is Cézanne’s brush strokes that hold the audience spellbound.

The spectacle was accompanied by the work of Vassily Kandinsky (1866-1944).

Known as the founder of abstract art, Kandinsky was greatly influenced by Cézanne.

Born in Moscow, Kandinsky was also a poet and art theorist. In 1900 he settled in Munich studying painting and traveling across Europe with his partner Gabriele Münter. After meeting Cézanne, Monet and Matisse, Kandinsky’s neo-impressionist art became replaced with landscapes. Subsequently he became interested in abstract art and his work constantly challenged conventional esthetical norms.

Forced to return to Moscow in 1914, Kandinsky witnessed the Russian revolution finally leaving Russia for good in 1921 with his wife Nina, to join the faculty of the Bauhaus in Weimer, Germany.

In 1933 Kandinsky fled Nazi Germany eventually settling in Neuilly-sur-Seine, west of Paris, where he spent the rest of his life. Here he became influenced by local surrealist painters. His palette of colours softened and small creatures and cellular shapes appeared in his work. 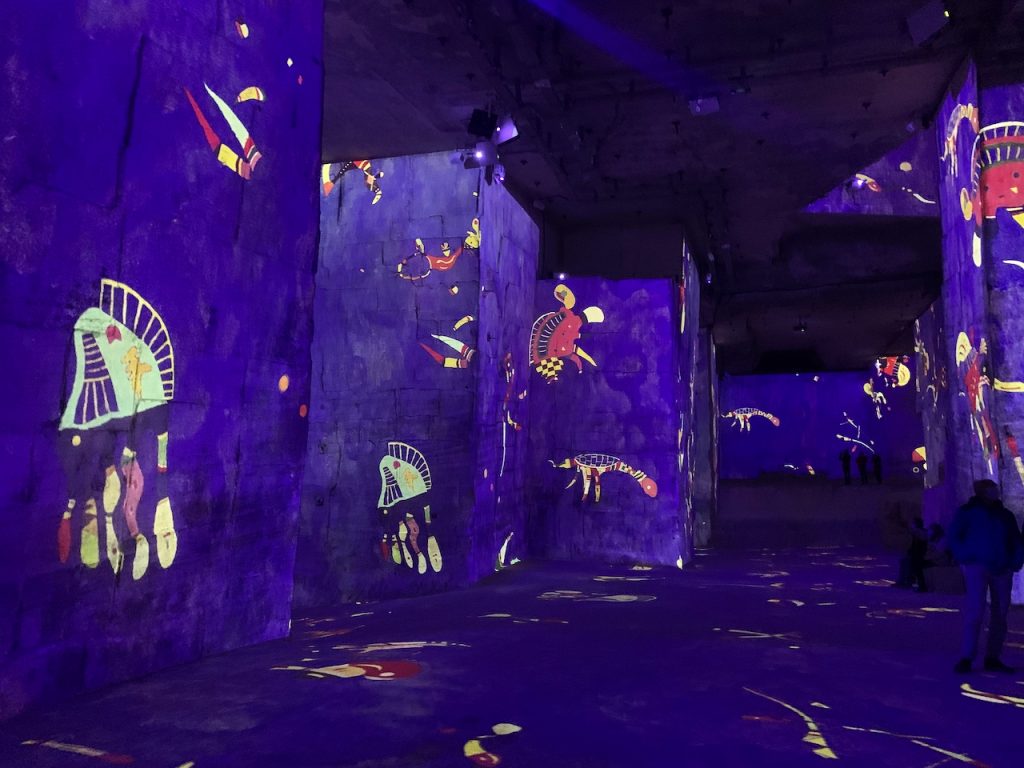 Paul Cézanne was born in Aix-en-Provence in 1839. His father had grand ambitions for him. Having risen from humble beginnings as a hat maker, he’d become the owner of a bank where he expected his son to join him. He sent Paul to boarding school (1852-1858) where Paul was influenced by the future writer Emile Zola, forming a life-long friendship with him. In 1837 Paul joined the drawing academy in Aix and to the great disappointment of his father he abandoned his law degree and moved to Paris. Spending time with Zola he studied at the Académie Charles Suisse but traveled frequently back to Provence.

Cézanne was a prolific painter creating multiple versions of his work.

He produced numerous still lives, restoring the nobility of what at the time was regarded as a minor genre.

“With an apple I will amaze Paris” he is said to have exclaimed.

In 1866 Cézanne began a series of paintings of his Uncle. He used a technique where he applied thick layers of paint to model the face and modulate the color. It marked a turning point in his career. This unconventional style was rejected by the Salon in Paris who mockingly declared his portraits were painted ‘not only with a knife, but rather with a pistol’.

In 1869 Cézanne met his mistress Hortense Fiquet and began working along side his friend, Camille Piassarro. Cézanne refined his technique painting the outdoors, capturing the beauty of forests, gardens, ponds, bathers and outdoor picnics.

Until the end of his life Cézanne painted the bathers in multiple settings, blending the human form into the landscape, concentrating his efforts on the body as a whole using them to structure space.

In 1874 Cézanne participated in his first impressionist exhibition.

In 1883 he met Monet and Renoir but they, like many others in their world failed to recognise his genius. In 1883 Cézanne married Hortense with whom he’d had a son in 1872. In 1888 Cézanne returned from Provence to Paris. In 1895 the art dealer Vollard exhibited 150 of Cézanne ‘s works including his oil painting the card players. The exhibition was a resounding success.

In 1901 Cézanne established his workshop on Lauves Hill in Aix-en-Provence which overlooked Mt Sainte-Victoire.

From 1902 until he died in 1906, Cézanne painted Mt Sainte-Victoire many times.

Like much of his work he painted it from several viewpoints,

studying the effect of light on his subjects.

Cézanne’s later works were predominantly of his native Provence where he found serenity painting scenes of every-day life, colourful houses, the local people, and landscapes. These landscapes illustrate how he regarded Provence, as the essence of nature.

These pieces offer a glimpse into Cézanne’s inner struggles, the independence of his style and his unique relationship with nature.

Today Cézanne is regarded as the pioneer of modernity. His particular use of forms and color set him apart from the impressionists which later influenced later early 20th century avant guarde-artists.

Cézanne continued to exhibit his works until 1906, the year he died. 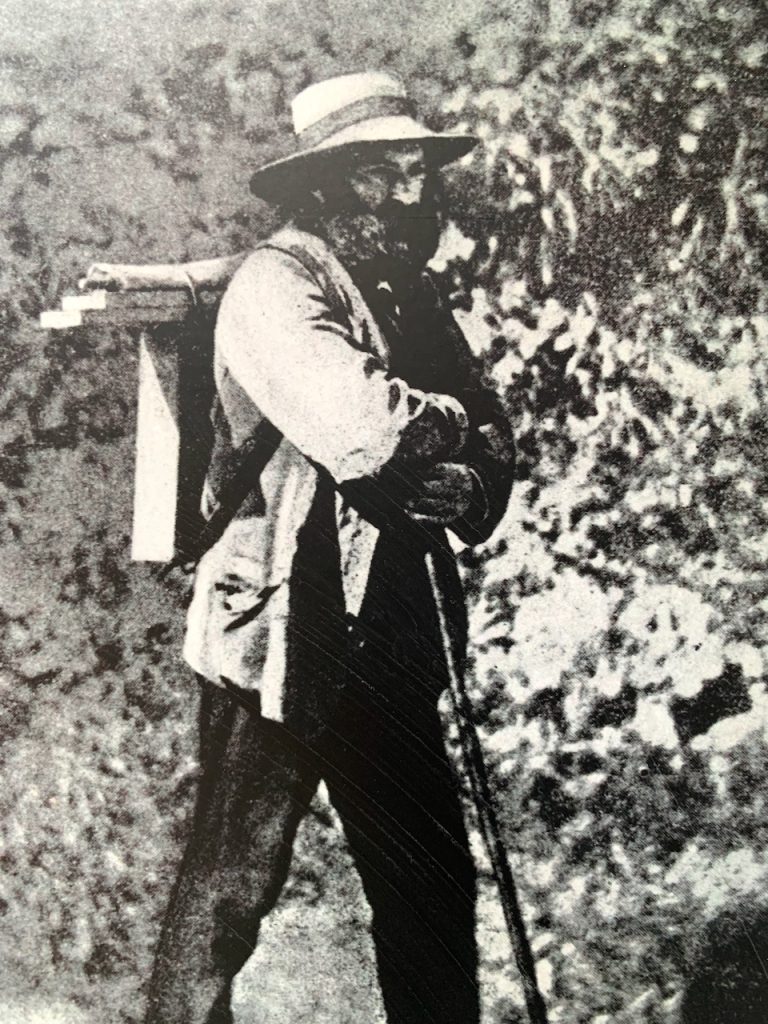 Tips for visiting Les Baux & Carrières de Lumières
Combine the entrance ticket with entrance to the Chateau ruins of Les Baux for a fascinating self-guided audio tour transporting you back to the time of knights and swash buckling heroes.

If you have time, visit one of the many olive mills and wine domains in Valley Le Crau and the Roman road Via Aurelia below Les Baux on your departure.

Previous Article The Knights Templars and cheese of the Aveyron 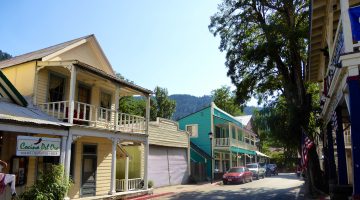