It’s December in Provence, snow has already sprinkled its magic across the villages and as the nights draw in and daylights fades each day, a bitter chill drapes itself like a frozen mantle across the dark golden, sprawling vineyards.

Everywhere Christmas preparations abound as people ready themselves for le Fête Noël and all the traditions of  the season. In the larger cities wooden chalets straight from a German Christmas story pepper the streets and each weekend, scattered throughout the region, the villages play host to Christmas markets, Marchés de Noël

From the end of November the Cours Mirabeau, in beautiful Aix-en-Provence, is strung with a line of wooden chalets, each one offering the bounties of Provence for Christmas.

Lavender of course, is one of the jewels of the Provence terroir. In June vast rows of previously sleeping little hedgehogs (well that’s what they look like to me!) are transformed into stunning bushes of wafting fragrance gently scenting the air with their special perfume. By November those delicate blooms have been neatly wrapped and packaged ready to stuff  Christmas stockings! 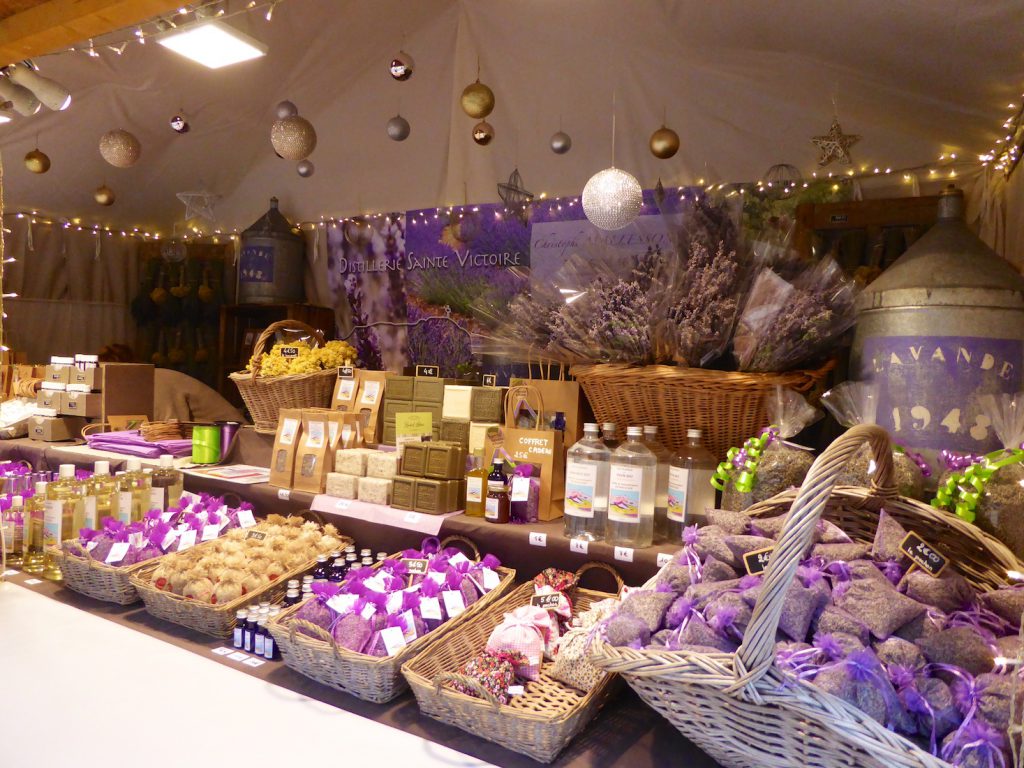 Calissons d’Aix, come from the almonds grown all over Provence and most especially around Aix-en-Provence. References to Calissons can be found as far back as the late fifteenth century, they are still produced today from an ancestral recipe; a mixture of finely ground almonds, melon de Provence and candied orange peel, all drawn on a wafer bed covered with a royal icing setting, délicieux! 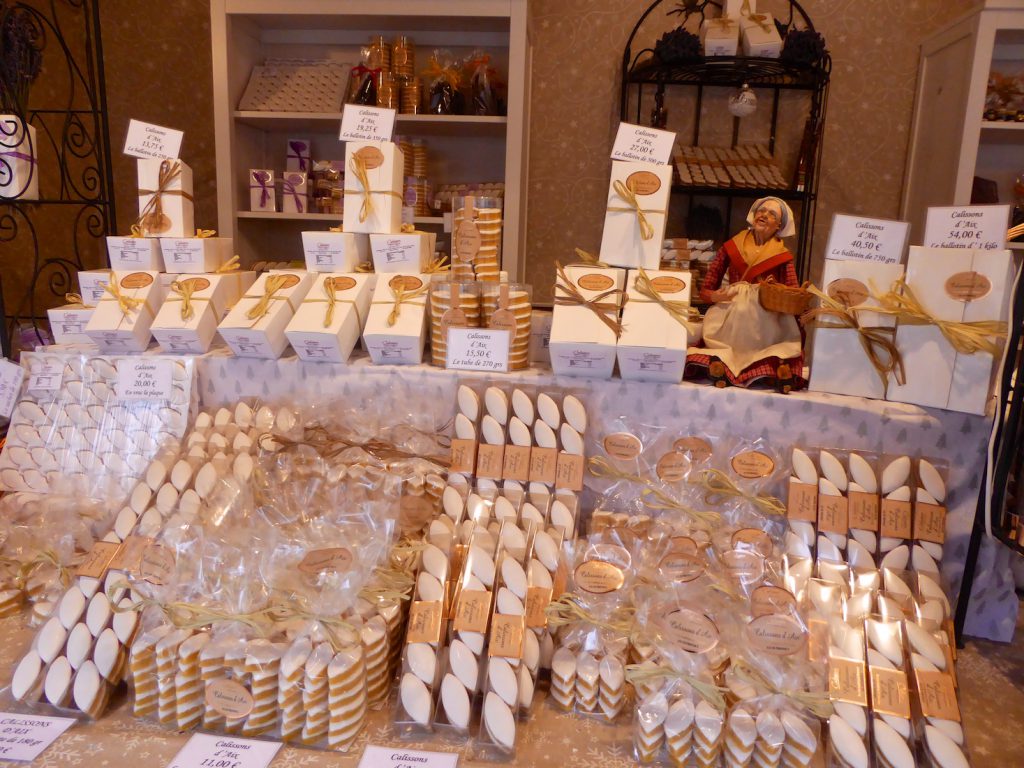 Centrally positioned among the gifts of Calissons is a santon. Santons are small, hand-painted terracotta nativity scene figurines produced in Provence. They were originally created by an artisan from Marseilles, Jean-Louis Lagnel (1761-1822) during the French Revolution. Traditionally a Provencal crib scene would be made up of 55 Santons depicting the different characters of a Provencal village, the scissors grinder, the fishwife, the blind man, and the chestnut seller. It is not certain how many such artisans still exist today but the Santons remain a very big part of Christmas in Provence. 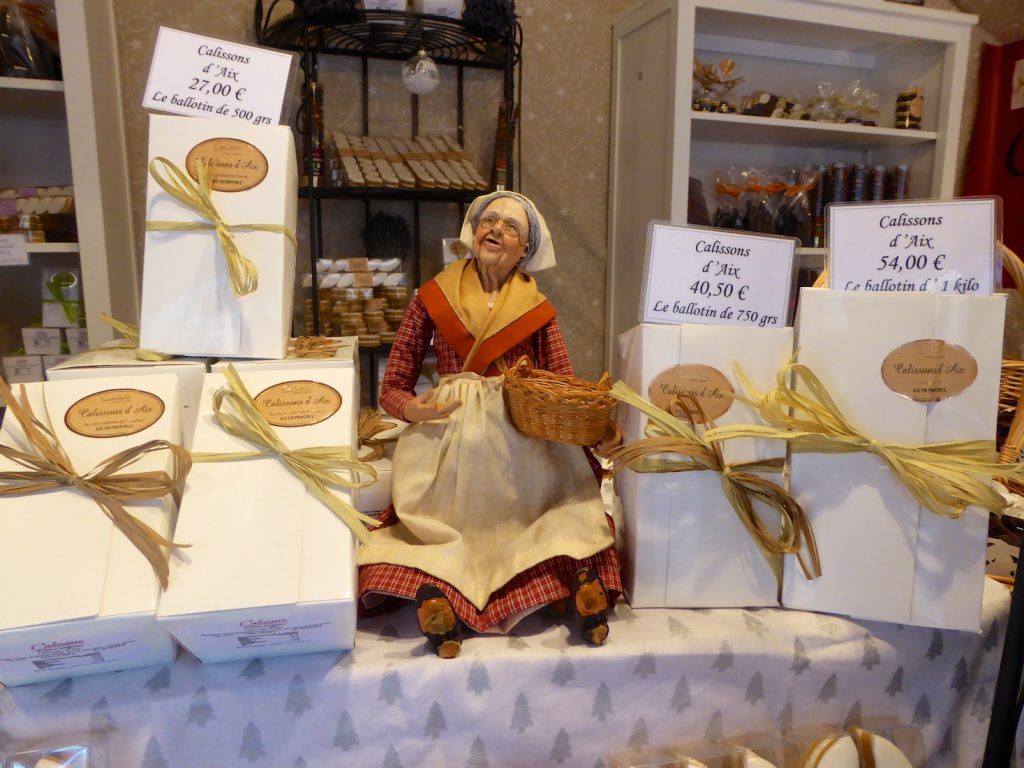 A collection of gifts from another bounty of the local terroir, the olive tree! 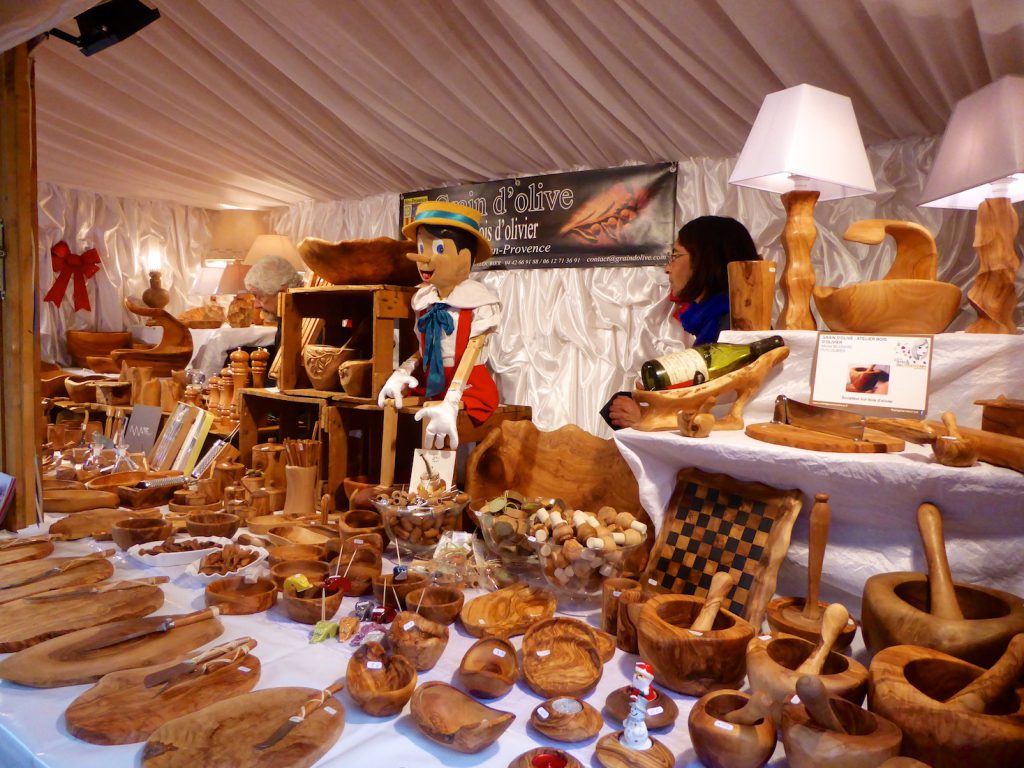 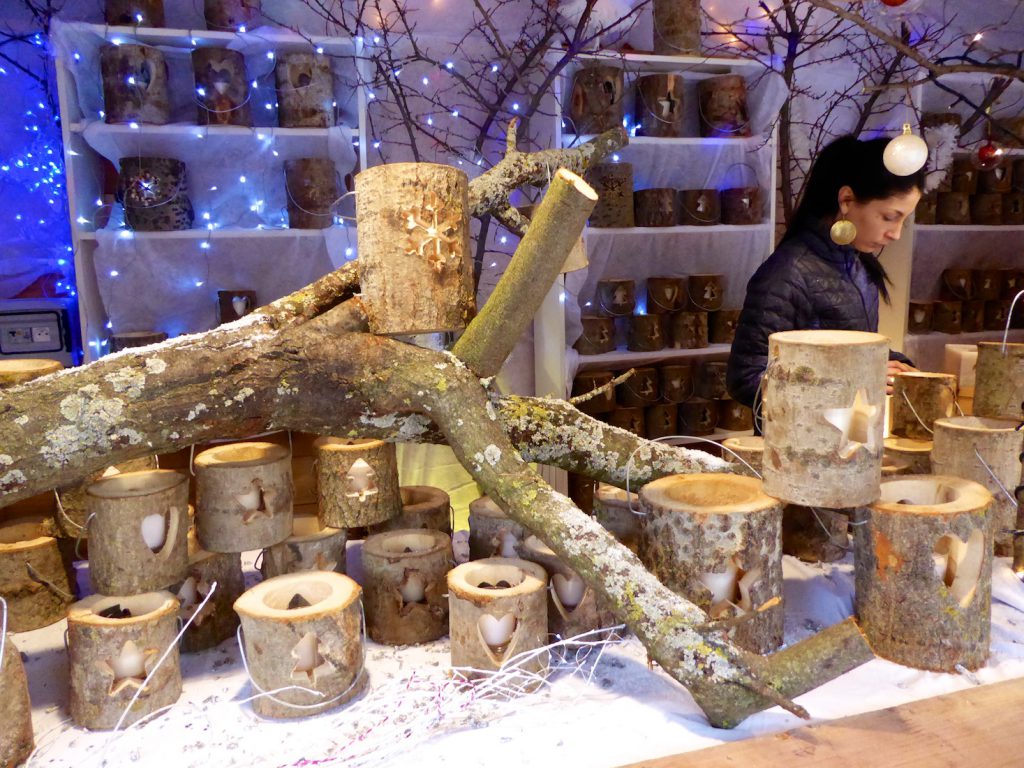 Perhaps in preparation for the traditional Provencal 13 desserts of Christmas, an age old custom after Gros Souper, (the equivalent of Christmas dinner) representing Jesus and the 12 apostles.

The 13 deserts normally include a Fougasse (an olive oil flatbread), a Pompe à l’huile (olive oil brioche), a platter of fresh fruit, a fig stuffed with walnuts, dates and white nougat. Different regions have their own variations for what is offered; in Apt, preserved fruit is normally served, in Aix-en-Provençe Calissons, in Marseille Navettes and Croquants, in Nice almond pastes, in the Alps of Haute-Provençe the Bugnes and everywhere the Bûche de Noël! 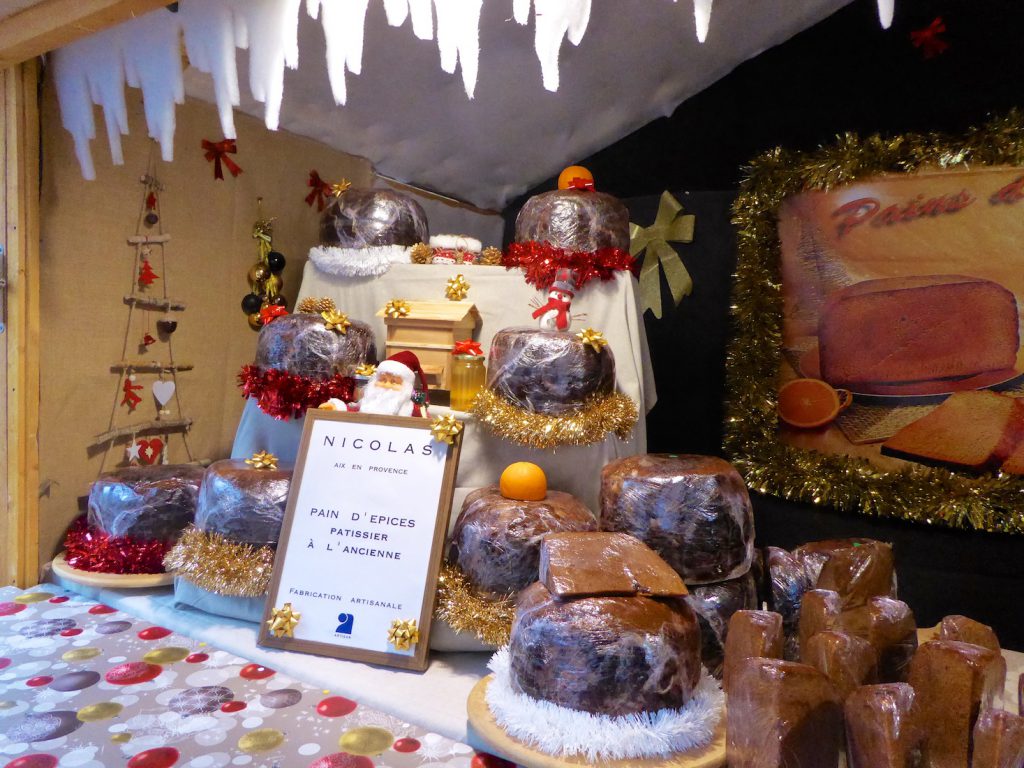 But there was nothing ordinary about the chocolate at this stall at Aix’s Marché de Noël. Each gift piece was a work of art, a masterpiece of every theme imaginable! 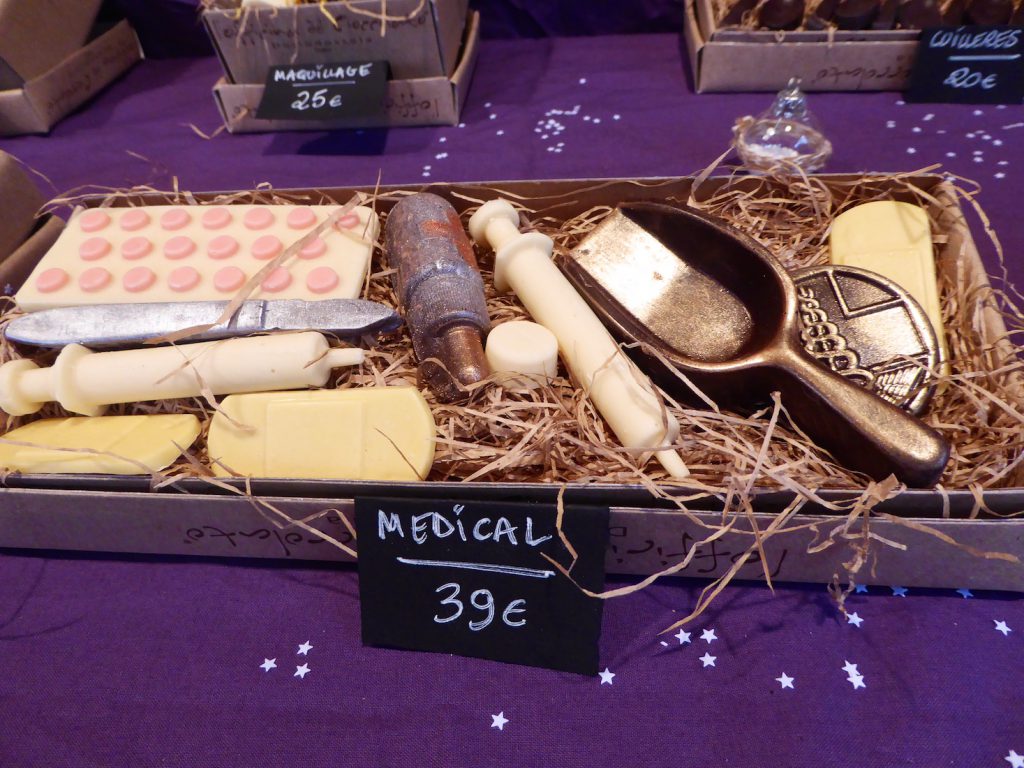 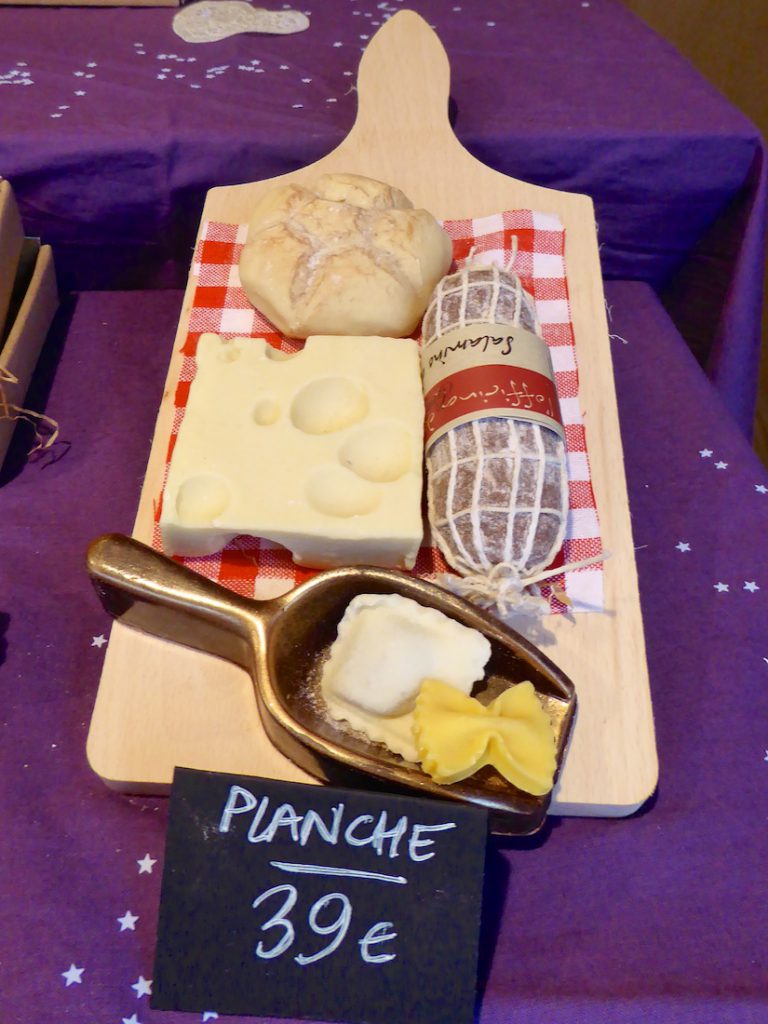 The Marchés de Noël are held in local schools or town halls and sometimes in the enchanted setting of a local winery such as Château Val Joanis just a ten minute drive from Lourmarin. I have to admit we didn’t find too much to buy apart from their divine wine! It’s lucky our little maison de village has a cellar!

Château Val Joanis is nestled at the foot of the Grand Luberon mountain, minutes from Pertuis and close to Lourmarin. This stunning, 400 hectares estate sits on the site of an ancient roman villa and the château originally belonged to Jean of Joanis, secretary to King Louis III of Naples.

As part of the Marché de Noël, in addition to wine, there were all sorts of tempting offerings, gourmet vinegars, olives, preserves and other gifts.

The wine itself was too tempting to resist. Powerful and elegant reds, a rosé of Syrah and Grenache which now is our local favourite and a fresh, crisp, white composed mostly of Viognier, Roussanne and white Grenache, magnifique! 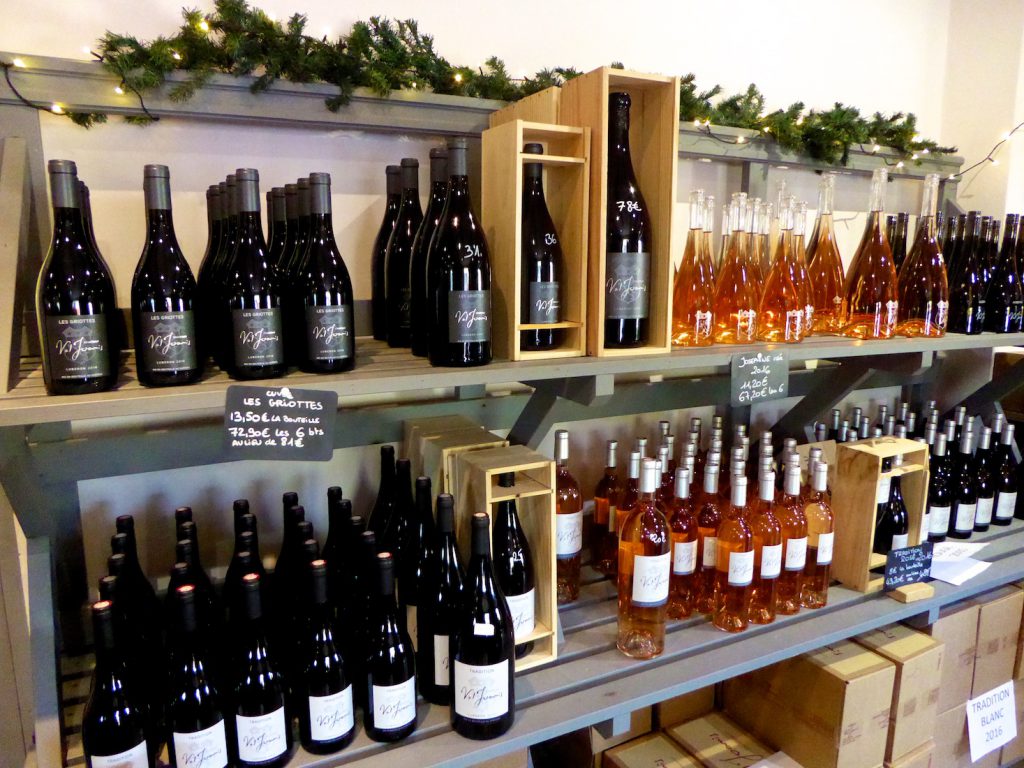 Outside there were pony rides and walks around the château’s beautiful gardens which we will be returning to in warmer weather. There was also this wonderful children’s book stall, aptly named for just like Château Val Joanis  it was supercalifragilisticexpialidcocious!

Joyeux Noel everyone from Provence, enjoy your Christmas shopping!! 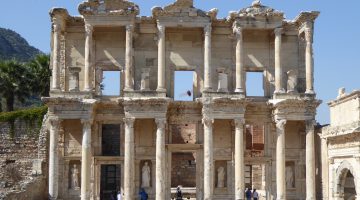