Singapore during World War II was thought to be an impregnable fortress.
When it fell to Japan on February 15th 1942 it was probably Britain’s most humiliating defeat.

What followed were three and half years of hardship and cruelty.
No more so than at Changi …..

Entrance to Changi Museum and Chapel

A visit today to Changi Museum and Chapel is a solemn reminder of the evils of war. Most of the original gaol has been demolished, the museum and chapel remain to tell the story of what happened there after the Japanese capture of Singapore in 1942. 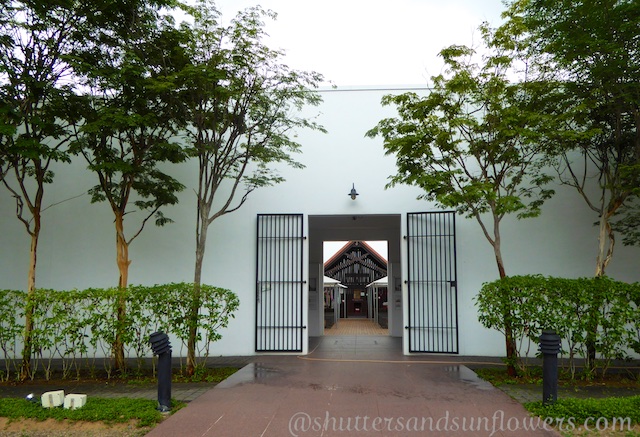 In 1942 Changi Gaol was a civilian prison on the Changi Peninsular, the British Army’s military base in Singapore, part of which included a collection of military barracks. Once the Japanese took control these barracks were used as prisoner-of-war (POW) camps and eventually any references to anyone of these camps just became ‘Changi’. Over 40,000 Allied troops were imprisoned here, mainly in the former Selarang Barracks. Most were then sent to work as slaves in Japanese occupied territories such as Sumatra, Burma, and the Burma-Thai railway. Thousands of civilians, mostly British and Australian, were imprisoned one mile away from Selarang in Changi Gaol. During the Japanese occupation in addition to the troops that were sent to Changi Gaol, over 3000 civilian men, 400 women and 66 children were incarcerated there, crammed together in terrible living conditions often tortured and beaten. The average living space per adult was 24 square feet, room barely enough to lie down. It became a living hell. 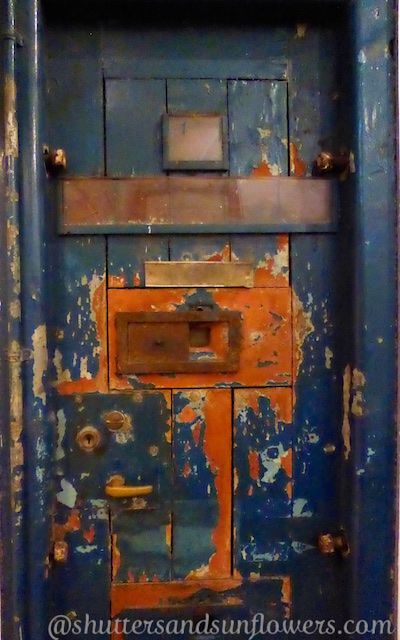 Initially the Japanese seemed indifferent to what the prisoners did in Changi Gaol and the other POW camps. Concerts were organised along with quizzes and sporting events, although a meticulous military discipline was maintained.

However, after Easter 1942, attitudes changed following a failed POW escape at the Selarang Camp. The Japanese demanded that everyone sign a document declaring that they would not attempt to escape. When this was refused over 15,000 POW’s were herded into a barrack square and told that they would remain there until the order was given to sign the document. When this failed a group of POW’s were shot. Despite this, no-one signed the document. Only when the Japanese refused to make much needed medicine available to the POW’s, was the order given to sign the document. It was a point of no-return for the POW’s who then became used for forced labour. The formula was simple – if you worked, you received food, if you did not, you would get no food.

The shoes belonging to a POW who had been shot, left out to remind others not to disobey orders, rope used for torture 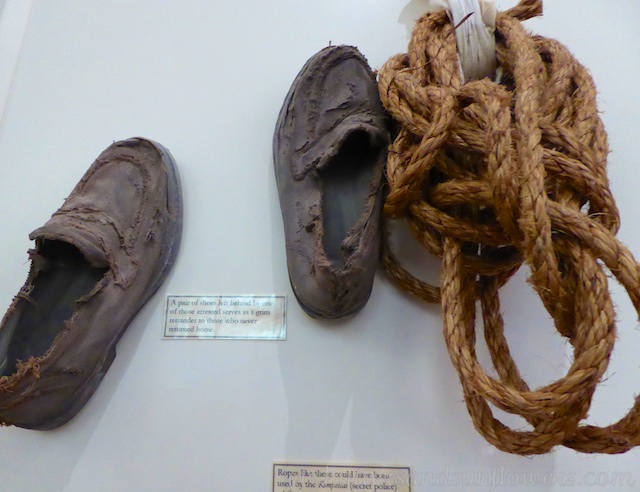 There are many recollections from the POW’s of how the local Chinese, including the elderly, would try to help them as they were marched through Singapore to work. Despite being beaten they would appear every day trying to give them morsels of food and drink. 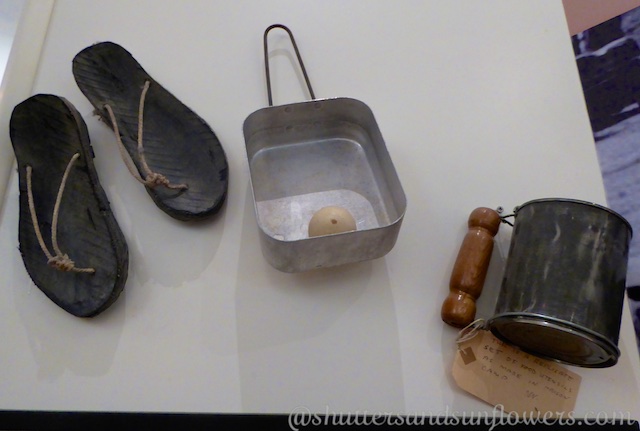 By 1943, the 7,000 men left at Selarang Barracks were moved to Changi Gaol. The Changi Gaol had been built to hold about 600 people, with five or six to one-man cells this severe overcrowding, together with acute food and medicine shortages, meant death from malaria, dysentery and vitamin deficiencies became rife. 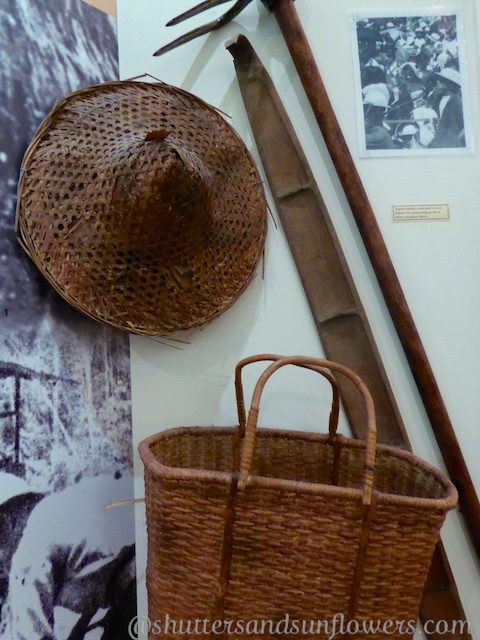 POW’s were made to dig tunnels and fox holes in the hills around Singapore as hideouts for the Japanese should the Allies return. Many POW’s believed they would then be killed; in fact when the Allies did recapture Singapore, the prison was simply handed over to them. After the war Changi Gaol, renamed Changi Prison, resumed its function as a civilian prison.

A piece of the original gaol wall 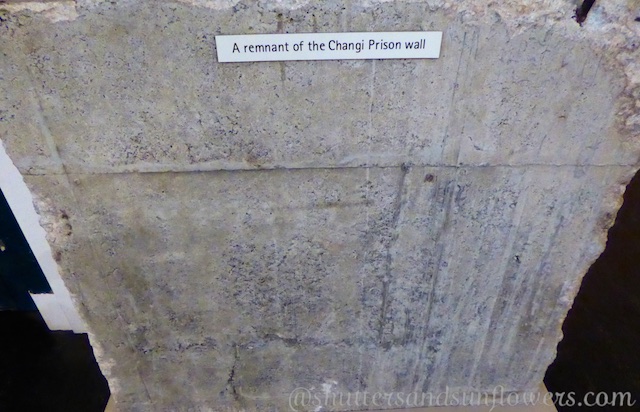 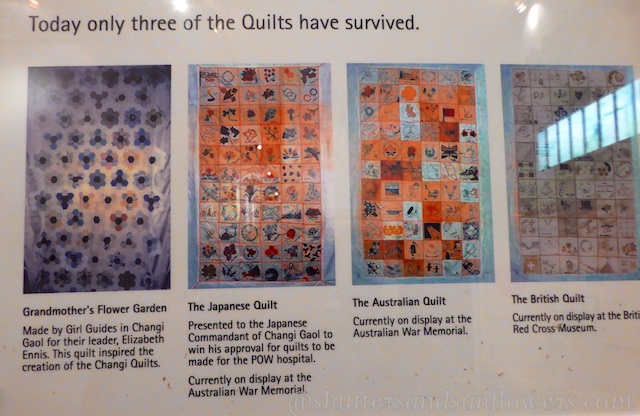 The Changi quilts are a testament to the courage,  ingenuity and perseverance of the female Changi internees. The quilt making was initiated by Canadian, Ethel Mulvaney, to alleviate boredom and frustration. More importantly it was a way to communicate with the male internees, as all other communication was forbidden. Women were given six-inch squares of rice sack cloth to embroider her name. Sown together, under the pretext of a gift, the Quilts were handed over to the civilian men for the POW hospital. Knowledge of the women’s well-being boosted the men’s morale.

This souvenir cloth is similar to a piece that British POW, Augusta M Cuthbe, had women internees embroider their names on.

In early 1942 Padre Fred Stallard, a chaplain in Roberts Hospital at Changi, obtained permission to convert a small room of Block 151 into a chapel. Built mainly be Australian prisoners this became St Luke’s Chapel.

This 76cm2 piece of silk was used as the altar cloth in Changi Prison’s St George’s Chapel, during World War II. It fell into the hands of Singapore’s then Chief Postmaster, Geoffrey Carl Allen. He died in England but when his wife heard about the worldwide 50th anniversary celebrations of World War II she donated it and 5 years later it was sent to Singapore when the Changi Chapel Museum was being redeveloped.

The wall murals in St Luke’s Chapel were painted by Stanley Warren who had been a commercial artist before the war. He had come to Changi Gaol hospital as a critically ill British POW and despite severe physical limitations was encouraged to paint murals on the chapel walls. Although paint was not readily available, with the aid of other prisoners, who unquestionably put themselves at risk, materials were gradually acquired. Crushed billiard cue chalk was used to produce blue. Warren began the first of the Changi Murals on 6 October 1942. 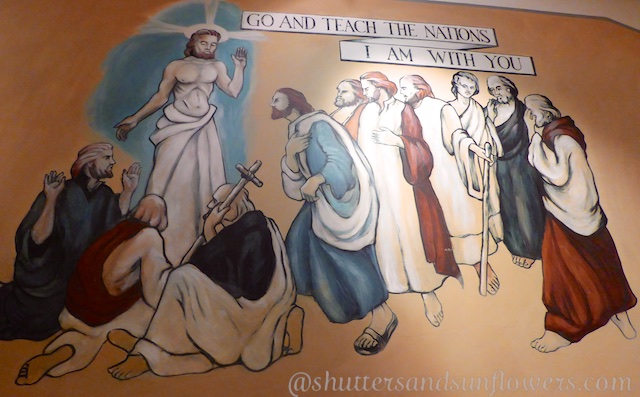 In August 1943 Robert Hospital was relocated to Selarang Barracks, and a new St Luke’s Chapel was set up, the original chapel was eventually converted into a store used by both the Japanese and the RAF. The walls were painted over and the murals concealed. In 1958 an RAF serviceman detected traces of color on the walls, layers of distemper were scraped off and the murals were once again revealed but no one knew the identity of the artist. The RAF Changi Magazine, ‘Tale Spin’, published pictures of them in an attempt to locate the artist. At the same time a book entitled ‘Churches of Captivity in Malaya’ was found in the Far East Air Force Educational Library revealing the name of the painter. In January 1959 Stanley Warren was found, he was an arts master at Sir William Collins Secondary School in North London. He was asked to return to Singapore in the early 1960’s to restore the murals. 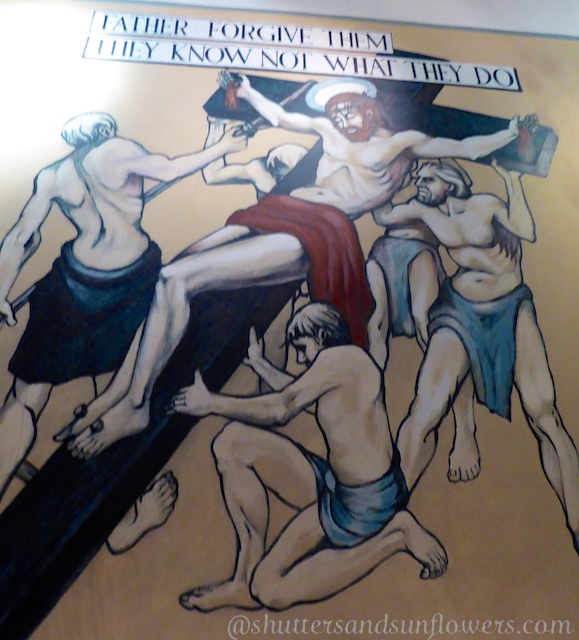 Initially Stanley was very reluctant to return because of his horrific war time memories. However in December 1963, despite the great distress it caused him, Stanley went back. He became very dedicated to the restoration, returning to Changi again in July 1982 and May 1988, which was his final visit. He passed away in Bridport, England on 20 February 1992, his murals however remain a legacy forever.

In 1980 Changi Gaol was refurbished into a modern penal institution. By 2005 most of the original prison was demolished and a larger facility built. Today only a 180m stretch of the prison wall facing Upper Changi Road remains. The iconic main gate of the prison, two guard towers and the clock from the original clock tower have been preserved at the original site.

A visit to the Changi Museum and Chapel is distressing but very moving, a testament to the courage and determination of people bravely overcoming great adversity. It’s well worth including on your itinerary whilst visiting Singapore.

Next post Perfectly Provence, Shutters and Sunflowers, The Provencal Landscape

Previous Article Dubai, the western city in the desert 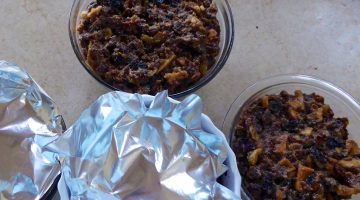