‘A Good Year’ near Bonnieux, Provence

There are some films that you just watch over and over. Almost every visitor that stays with us wants to visit Château La Canorgue, the organic father and daughter winery, just up the ‘hill’, tucked within the shadows of the beautiful perched village of Bonnieux. Château La Canorgue is where the Ridley Scott directed, Peter Mayle movie, ‘A Good Year’ was filmed.
When you visit Château La Canorgue, it appears that all they changed for the film was the château’s name, to Château La Siroque. As you stand by the vines and look up at the magnificent property it looks just as it did in the film, warm and inviting ‘aged to a soft patina’. You can hear Monsieur Duflot humming to himself behind you, as he lovingly tends the vines and Uncle Henry, muttering to the young Max about his next chess move. It is the closest I’ve ever got to actually stepping straight into a movie, and just 8 miles from where I am living in Lourmarin. 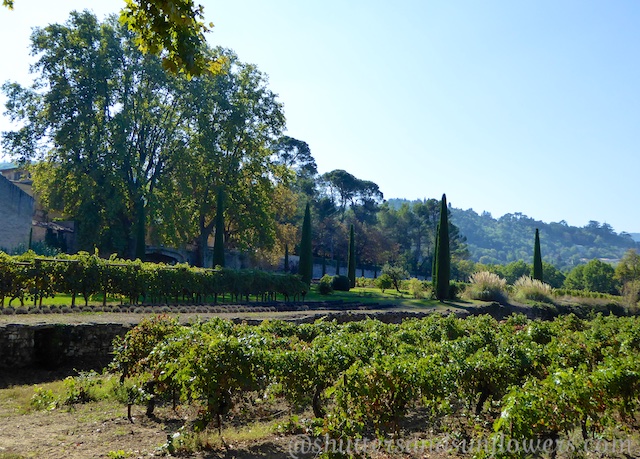 The movie itself has a timeless, ‘feel good’ factor.  True, it is set in one of the most visually stunning parts of the world, a cinematographer’s dream and they do an entrancing job. The natural Provencal light, so beguiling and inspiring to so many artists, Van Gogh, Gauguin and Cézanne, is all consuming, along with the striking ‘campagne’, richly abundant with its vineyards, olive groves and fruit trees. The charming medieval villages perchés are well featured. 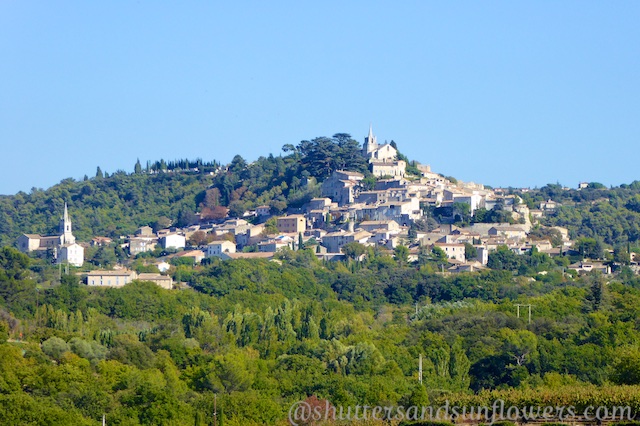 where the star of the film, Max, (Russell Crowe), circles the memorial in the center of town, several times, in his ‘little yellow car’ before meeting the Notaire! 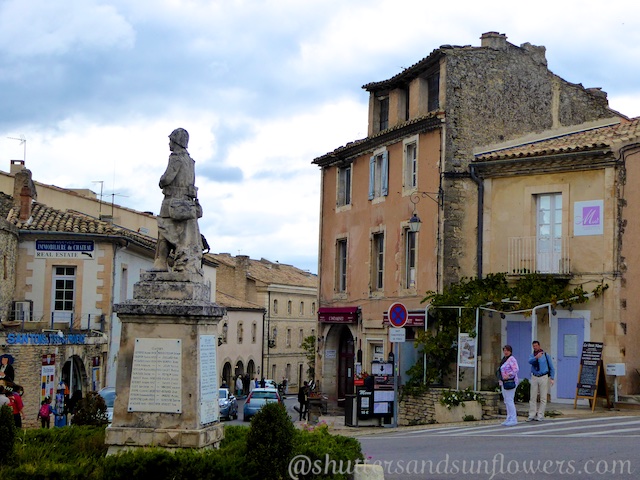 And then finally that matter of fact French attitude, the shrug and the ‘poof’, which is perfectly encapsulated by Fanny whilst she and Max were watching the film by the water. 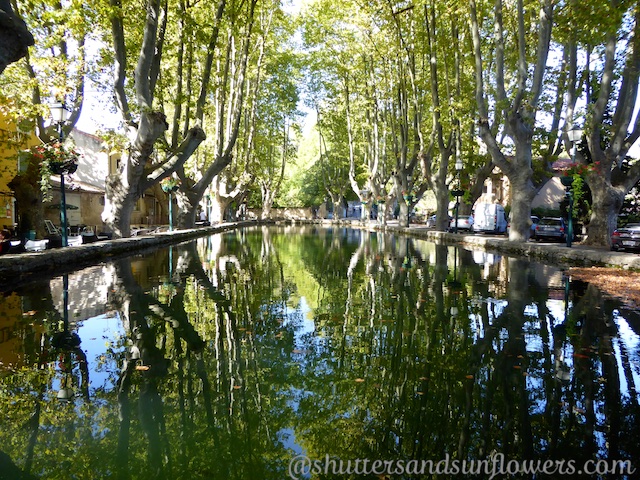 Comedy, romance, beauty, maybe not oscar winning, but it is heart warming and delightful, with that special ‘je ne sais quoi’.

There is also a deeper, rather profound part to this tale. For set against the backdrop of beauty that characterizes Provence, The Luberon in particular, this story is about someone ‘finding’ themselves. Someone abandoning what they thought was of prime importance to them, their raison d’être. In this case, greed and power, the pursuit of gain, a world of grand excess, of dubious morals, where no-one can have too much material wealth and  ‘winning is the only thing’.

The dawning of this realization, for Max, is a gradual re-acquaintance, an adult coming to understand the soul of a much cherished place from childhood. For me the film’s most stirring line is when Max explains to the new love of his life, the gorgeous Fanny, why he needs to return to his mercenary, somewhat unscrupulous life in London; “This place doesn’t fit into my life” he states sadly, but Fanny swiftly responds “No Max, it is your life that does not fit into this place”. 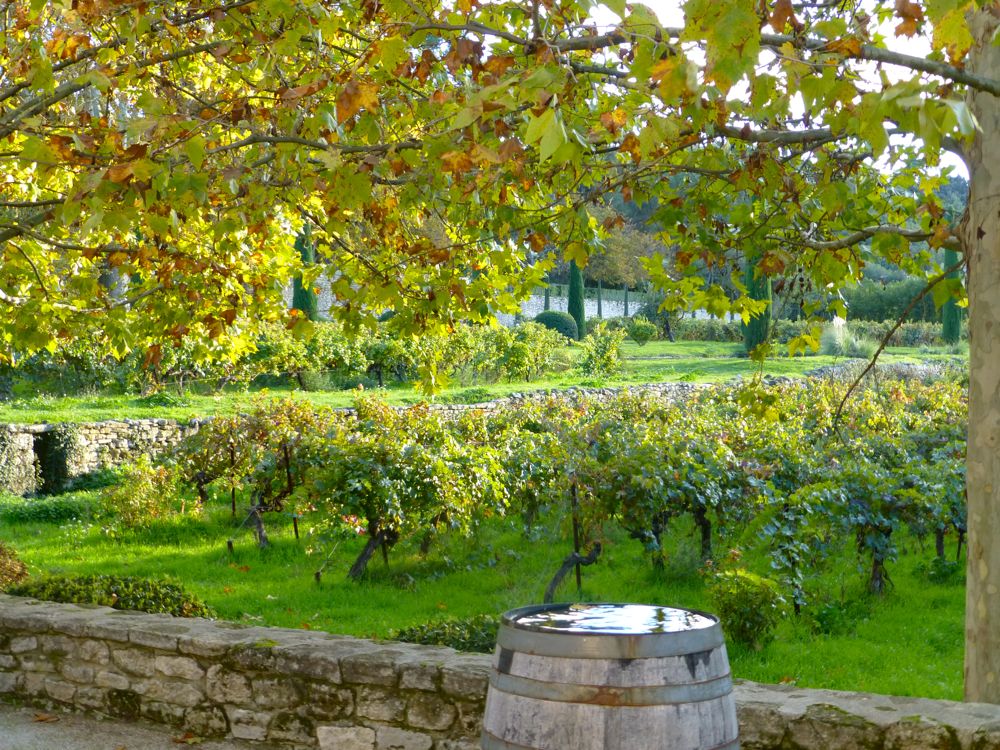 For how can a life based almost entirely on gain fit into a world where the only important appointment of the day is lunch? Where people stop to smell the lavender, where few people are rushing, where values are deeply rooted and solid, where time has almost stood still. 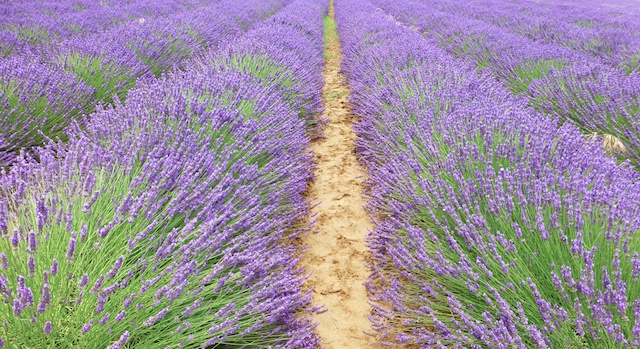 It begs the bigger question, ‘what is life all about?’ Something that Max ends up asking himself. He is among the fortunate few who firstly, stops to ask himself this big ‘life question’ and secondly is also able to make a choice; choosing between a life in London, where he could easily afford to buy two or maybe three, original Van-Goughs but probably, due to their priceless value, never actually see them, being forced to have them permanently locked away. Or, he could choose a new life, a different life, amongst the very beauty which inspired the artists, almost like being able to step into a painting.

Yes, I am sentimental, I know few of us can just abandon our well established lives and move to Provence. Careers, children, family commitments and the general ‘stuff of life’ stand before most of us like insurmountable road blocks. And Max was hardly ‘giving it all up’. He had inherited a stunning château, a thriving boutique vineyard and fallen in love with a ‘French Goddess’. This, after all is a Hollywood movie!

Yet those words of Fanny’s remain imprinted in my heart  “….it is your life that does not fit into this place”. For what is ‘our life’? Are we really living the life we want, in the place we want to be? What can each of us do to find what will make our own life as authentic and special as it should be? If you search carefully I bet you have more choice than you know! 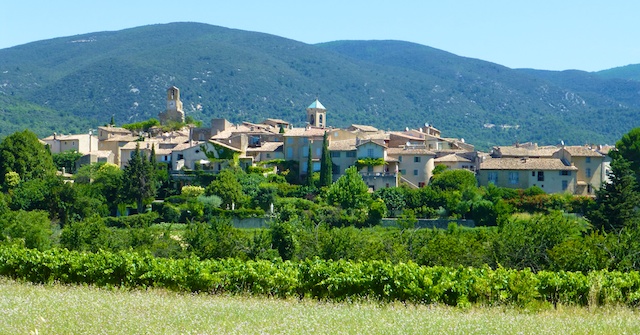 Download The Lourmarin Travel Guide to learn more about this beautiful region of Provence
Let me know your recommendations ! 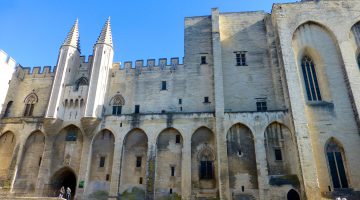