Life’s twists and turns, call them coincidences or serendipities never cease to amaze. In May I had stood by the harbor in Genoa, Italy, the birth place of the infamous explorer, Christopher Columbus. Three weeks later, quite unintentionally, I found myself standing before Captain James Cook, Whitby’s most famous seaman and Columbus’ predecessor by several hundred years but an equally renowned voyager. 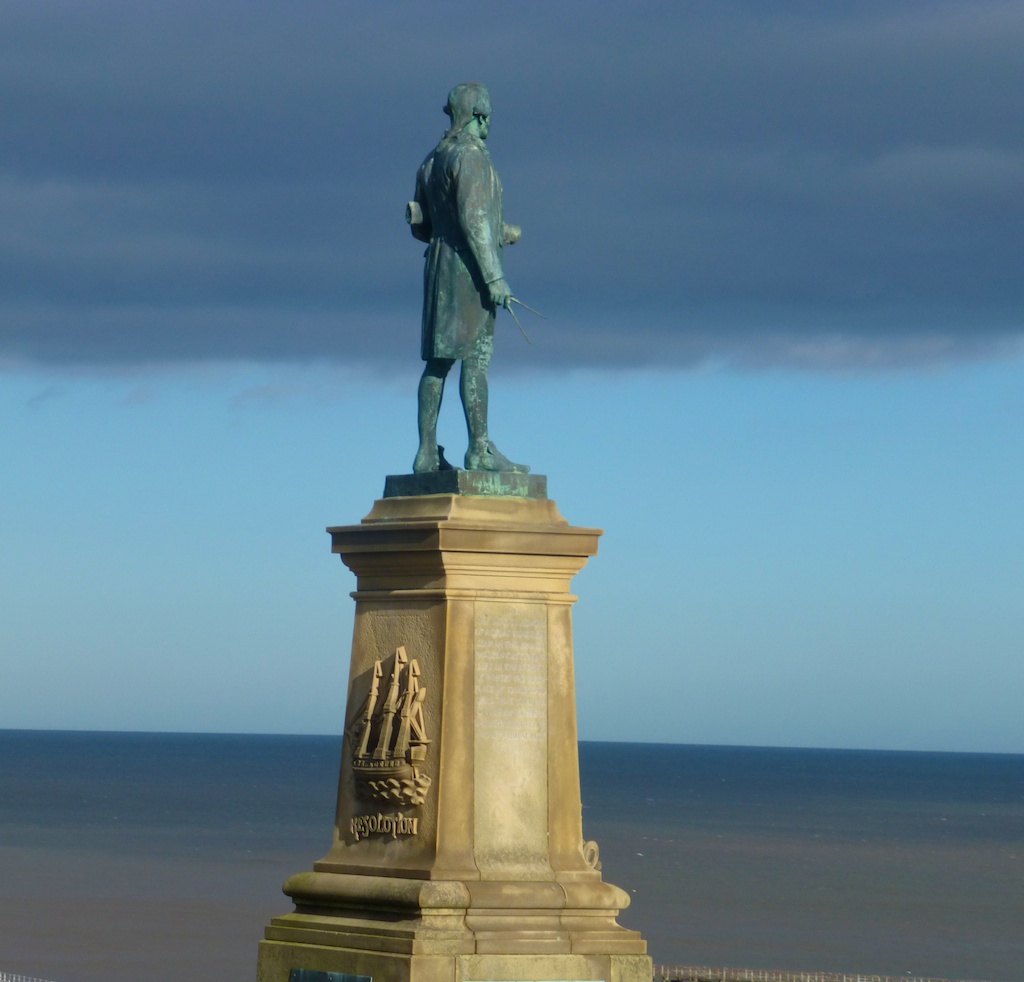 In 1766, as commander of HMS Endeavour, (built in Whitby), Cook sailed for the first of three Pacific voyages. Navigating thousands of miles across largely uncharted areas, he mapped lands from New Zealand to Hawaii in the Pacific, in a detail and scale not previously achieved. Although killed in Hawaii in 1779, he left an unprecedented legacy of scientific and geographical knowledge. 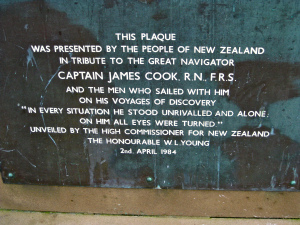 I was nearly a thousand miles north from Genoa on the bleak, English, North Yorkshire coast. I had arrived in both places unaware of the pieces of history awaiting me and was enthralled. 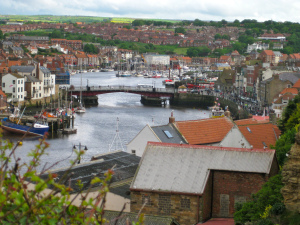 As you stare out to the North Sea, cold and threatening even in mid June, you cannot help but admire the courage and determination of such men. Wedded to the vast unpredictable ocean, battling ferocious weather systems in appalling, cramped living conditions on their tiny fragile vessels it is a wonder they survived, returning to share their incredibly brave discoveries which changed history forever.
Beside my sister and our husbands we stood and marveled at Cook’s statue, dominate above the small fishing town of Whitby. Steeped in history, dating back to 684, across the harbor, the ruins of the Abbey, referred to as ‘Dracula’s castle by the locals, quivered menacingly, clinging to its fragile spot on the cliff side. Hundreds of years of people living sparsely and simply, surviving from the bounties of the forbidding waters, crashing forebodingly in a never-ending rhythm of timelessness. Casting their fishing nets and hauling in their days toil as they were tossed and thrown at the mercy of Poseidon. 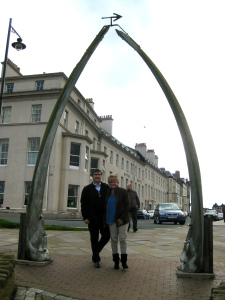 Once the 3rd biggest ship building town in England and a center for the the Whaling fishing industry from 1753 to 1831. Whitby is proud of its historical links to the sea.  I shivered in admiration and a silent thankfulness that we earned our living in a different way. 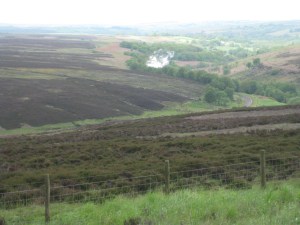 Journeying across the Moors to Whitby, the ghostly wails of Bronte’s ‘Heathcliff’ screeching in the scrawls of the seagulls, I marveled at how the ravages of the centuries had left this stunningly beautiful yet desolate landscape unchanged. Rolling moors carpeted in low-lying heather and gorse stretching for miles, frequently to be shrouded in swirling coastal fog. Although north of the Bronte sister’s Yorkshire home, the terrain was similar. It was easy to imagine Jane Eyre stumbling, blindly lost in both body and mind. 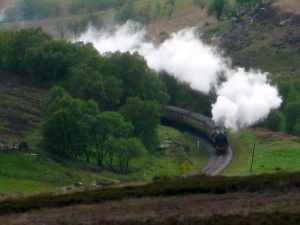 Delighted we watched a small spiral of ‘cloud’ come towards us from the far distance as the north Yorkshire steam train puffed and shunted into view. Once a main transport link now full of tourists reminiscing over a time past.
Yorkshire is deservedly deemed as one of Britain’s areas of outstanding natural beauty. From the dales in the south to these northern moors the scenery is spectacular. The golden stone architecture is reminiscent of England’s southern Cotswold’s, and it is also rich in history. Just over a hundred miles south of the sixth century Viking settlements at Lindisfarne, there are castles, monasteries and ruins of dwellings also dating back to the Vikings and before. Dominated by Mills and the late eighteenth century wool industry, powerful industrialists and landowners peppered the area with magnificent stately mansions. Castle Howard, Nunnington Hall, Scampston Hall, Newby Hall and Burton Agnes to name but a few, the latter of which we visited. 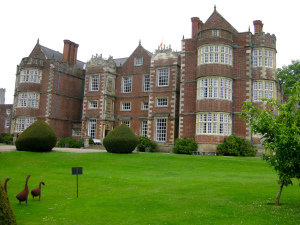 Burton Agnes, an imposing country seat, originally a Norman dwelling, still in existence today beside the main house, dates back to Tudor times. (This shows the Norman House’s interior.) 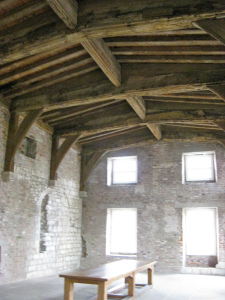 Like many similar properties, it is enveloped deep within the countryside and one wonders about the past difficulties of traveling to and fro via horse and carriage.

The immense wealth required to run such an estate is also hard to envisage; the heating, cleaning,clothing and feeding of such a household. 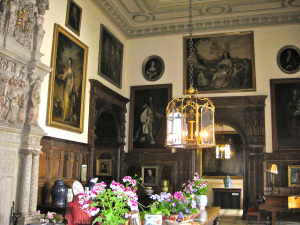 How the staff, both inside and out must have toiled, especially on the occasion of a royal visitor such as Burton Agnes had in 1602. This is the bed of James 1st, who stayed here on route from Scotland to London, proudly displayed today. 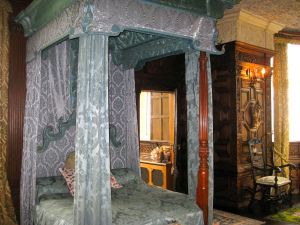 Outside we were dazed by the beauty and tranquility of the property’s immaculate grounds and delightful walled garden. 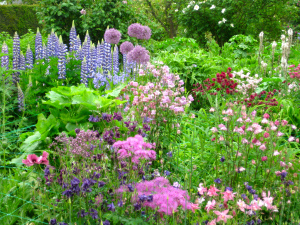 Here time seemed to have been captured and held, plants and shrubs of all varieties, lovingly tended over many years to still display both their grandeur and simplicity. 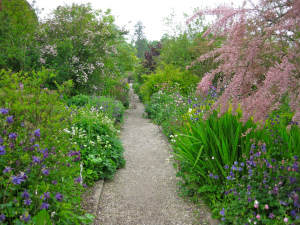 Previous Article Driving through to France to England