“We shall fight on the beaches……..but we shall never surrender” the immortal words of Sir Winston Churchill. And fight on the beaches is what thousands of brave Allied troops, did. Under the joint command of Generals Montgomery and Eisenhower, thousands of men courageously jumped into a violent and raging sea. Rained upon by Nazi gunfire from coastline defenses, known as the ‘Atlantic Wall’, many never even reached the beach. This was the D-Day Landings, the Allied invasion of the Normandy Beaches, on June 6th 1944, which mercifully changed the course of history forever, ridding the world of the Nazi reign of terror which had spread its evil like a cancerous mass across mainland Europe.

In the early hours of June 6th 1944 an Armada of 5000 ships slipped across the English Channel. When they opened fire, the Nazis, battered by recent ferocious storms, were completely taken by surprise. 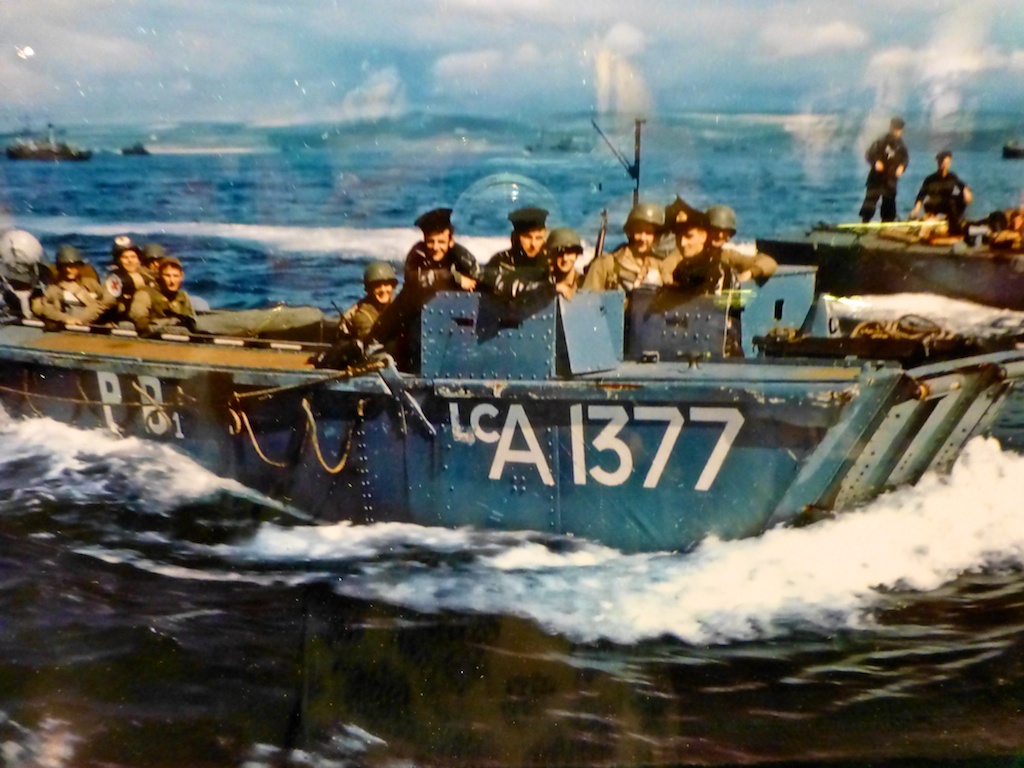 Seventy years later, standing beside a calm and tranquil sea which glistened like liquid steel, we stared at one of these troop carriers. Bathed in brilliant sunshine, it was hard to imagine all the chaos and terror that had occurred in 1944. Soldiers, burdened by uniforms and supplies, crammed together like canned fish, determinedly clutching their weapons, being thrown and jostled as these flimsy crafts were tossed amongst the tumultuous waves. The smell of fear must have pervaded the air, as each man contemplated that second when the bow would open and there would be nowhere to go but forward. Spewed out like lemmings, many to an immediate watery grave, these brave boys, helped free the world for people such as us. 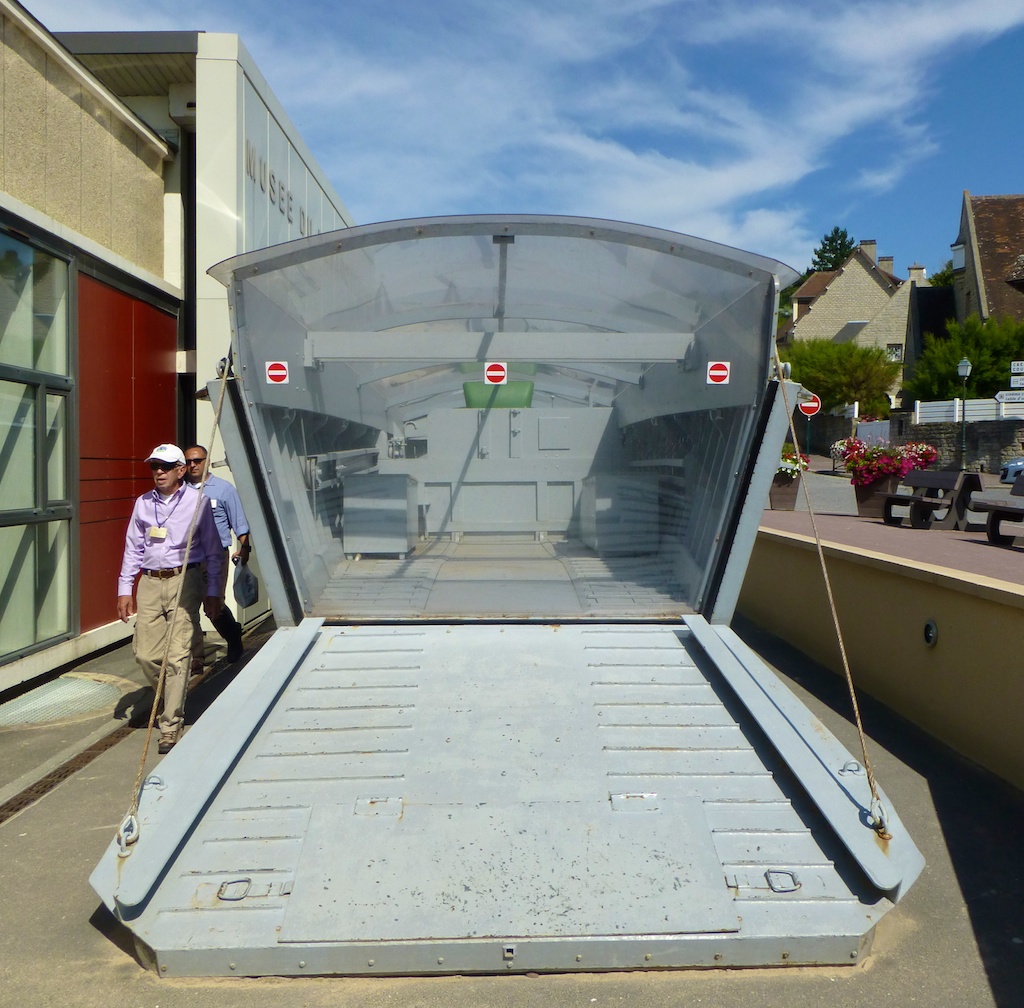 It was a massive military operation, relying on the success of so many smaller but critical events, the success of each ensuring the overall victory of the whole. One of these, codenamed ‘Operation Deadstick’, occurred at what became to be known as ‘Pegasus Bridge’. In the early hours of June 6th 1944, the British 6th Airborne Division silently descended like giant moths in gliders next to Pegasus Bridge. Although many lives were tragically lost in crash landings, the German defenses were overwhelmed within a few minutes. It was a significant triumph enabling Allied troops to land at Sword Beach and cross the river. This same division then destroyed a series of bridges which together with the destructive skills of the French Resistance, prevented German reinforcements reaching Normandy. 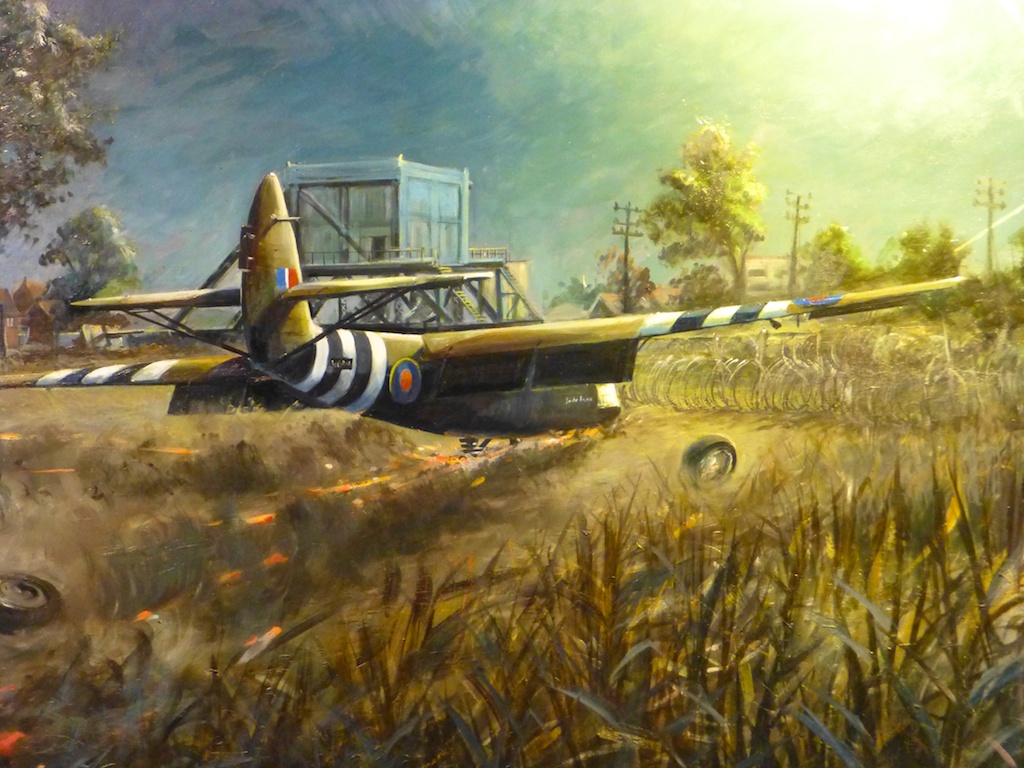 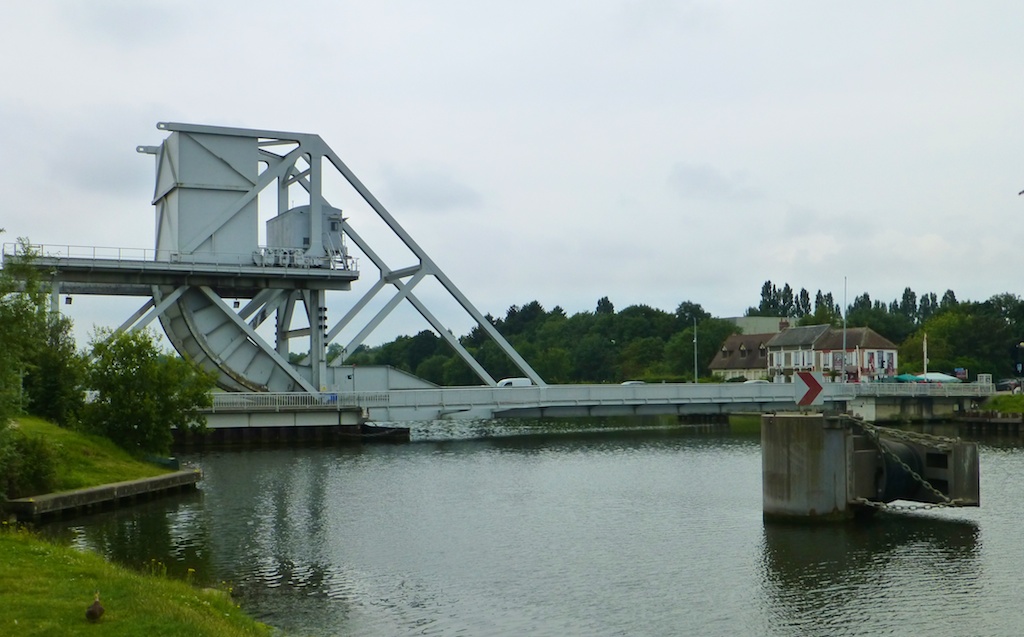 An original photograph of the landed gliders 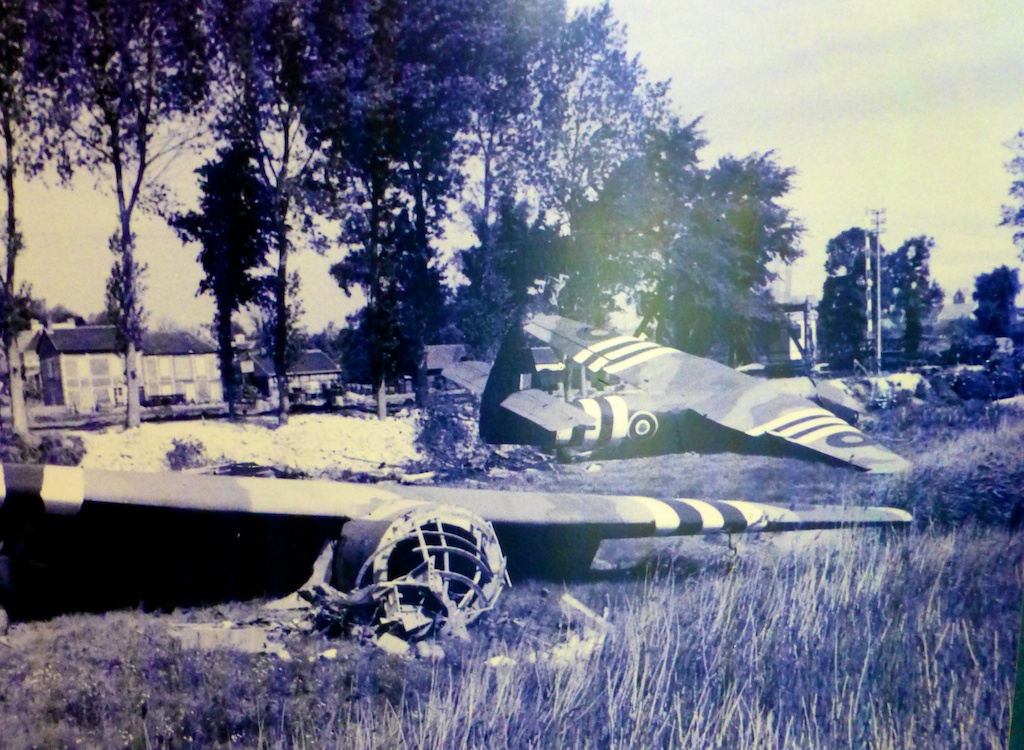 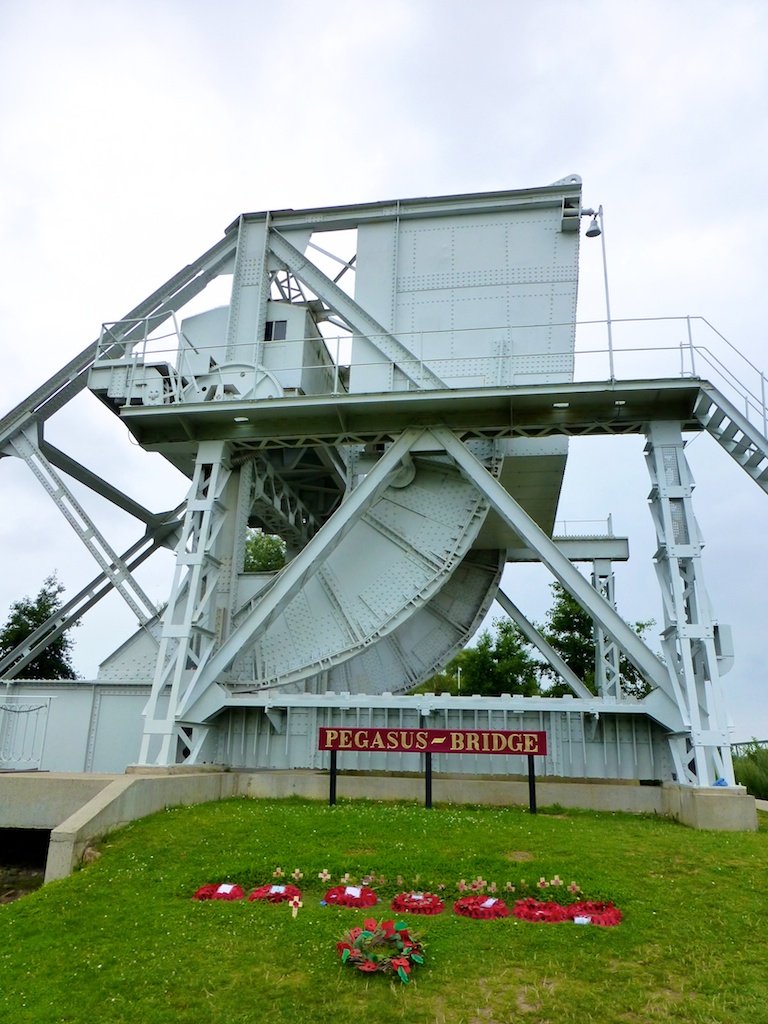 Images of The French Resistance 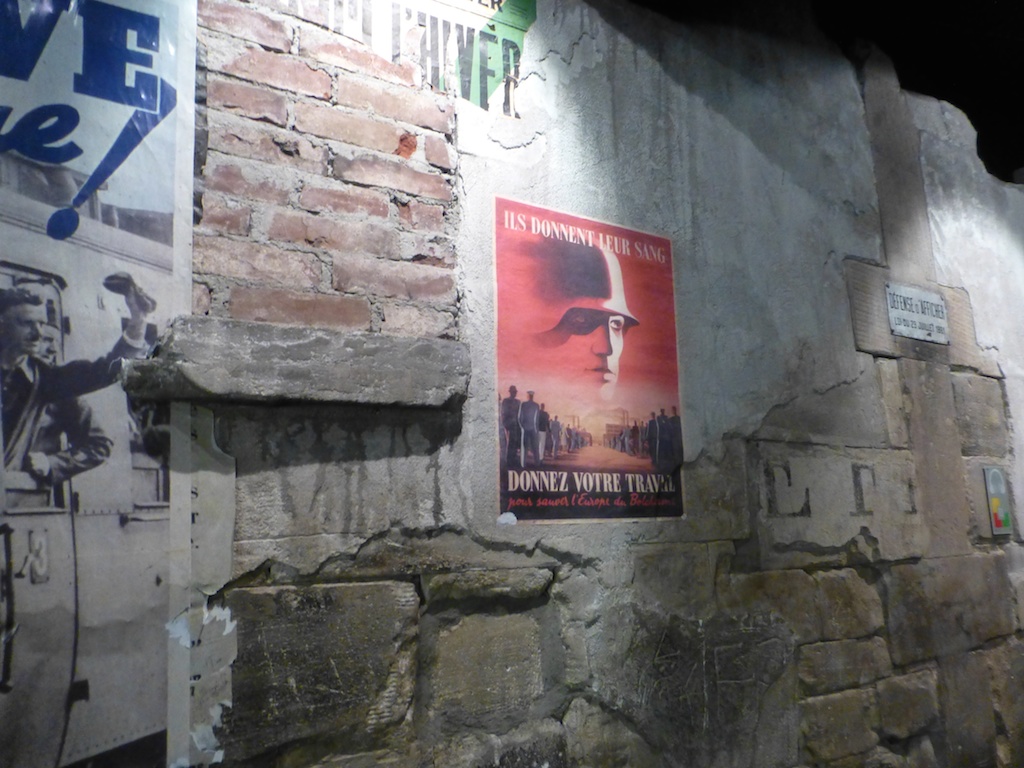 Another key component to the Allied success was ‘Operation Fortitude’, which fooled the Nazi High Command into believing that the Allied attack would occur in Pas du Calais further to the north. There were no significant harbours to the south which helped make the deception credible. However, this meant that the Allies had to create artificial harbours to enable their fleets to moor and off-load their gargantuan army of supplies; troops, tanks, trucks and armaments. 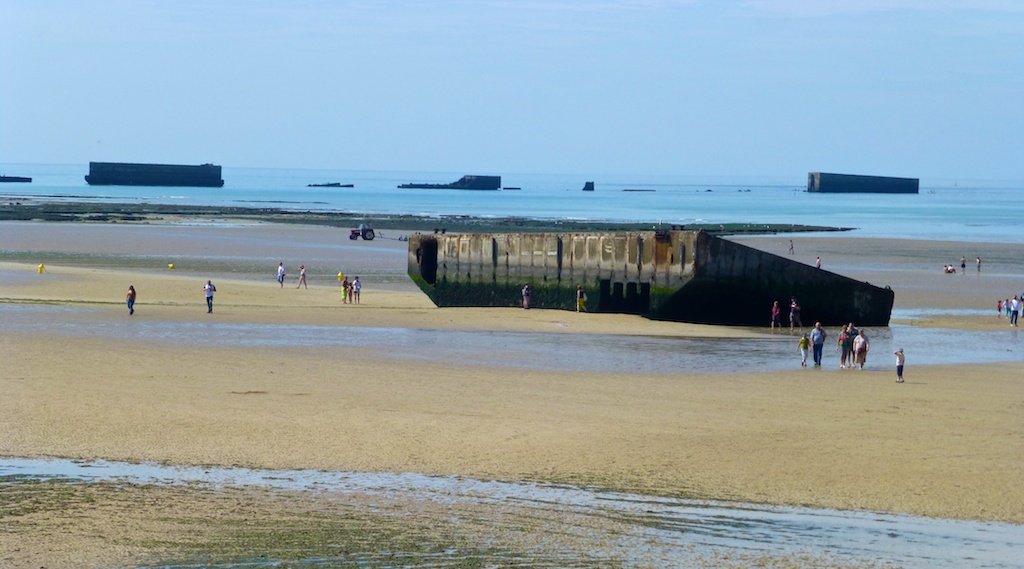 Remains of the Mulberry Harbour at ‘Port Winston‘, Arromanches. 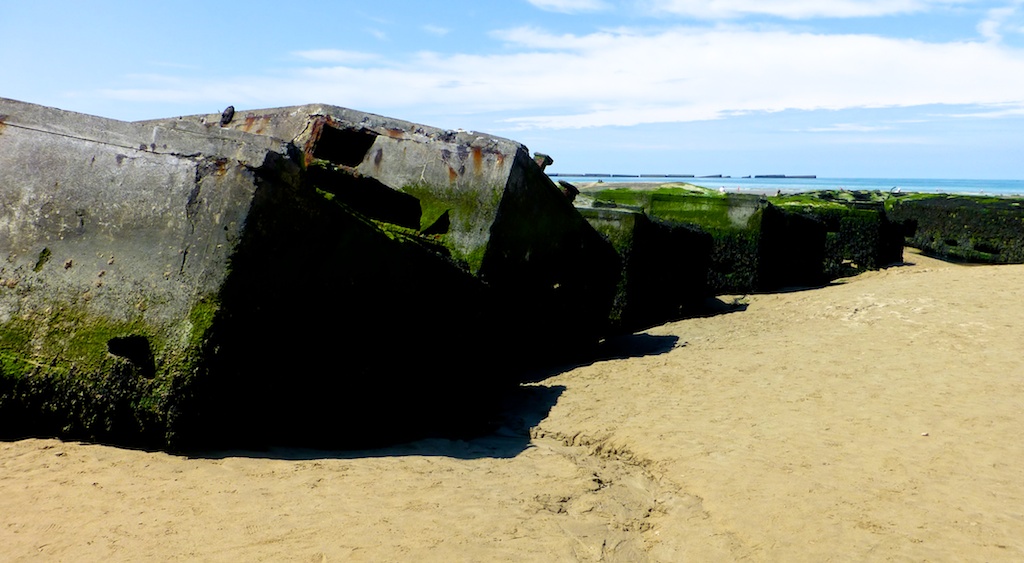 It was a daunting task and one of the greatest engineering feats of the war. The creation of these artificial, Mulberry Harbours’ began on June 7th 1944. Sixty retired battle ships were scuttled across the English Channel to be sunk in two locations, at Omaha Beach, where the Americans had landed and just off Arromanches which became known as ‘Port Winston’. One hundred and forty caissons were towed across the Channel at 5mph and set in place over the following 10 days, creating Mulberry Harbours which covered a stretch of 2 ½ miles along the coastline. Within just two weeks the Allies had gained the upper hand.

At the end of 1944 most of these caissons were dismantled and towed to the Netherlands to become part of their dike system. These few remain today, an enduring reminder of D-Day. 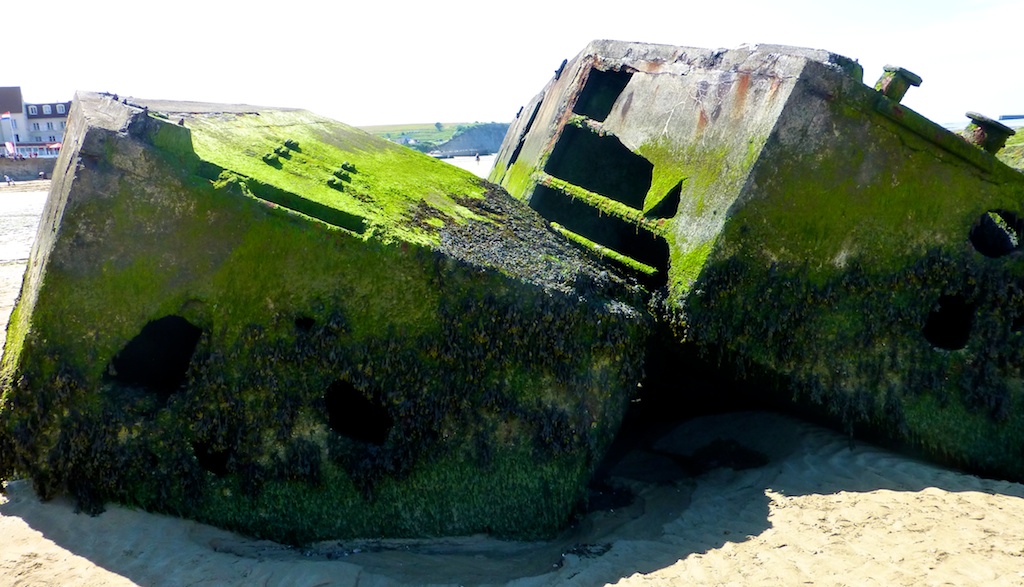 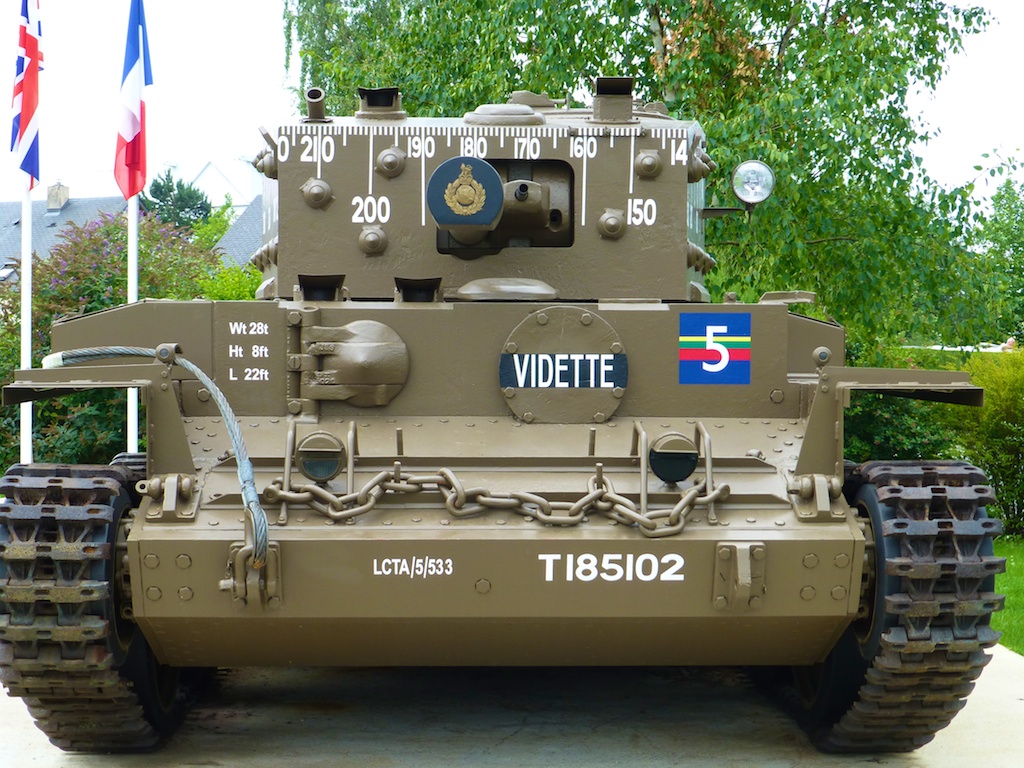 The French had suffered the miseries of Nazi occupation since May 1940 together with the division of their country. 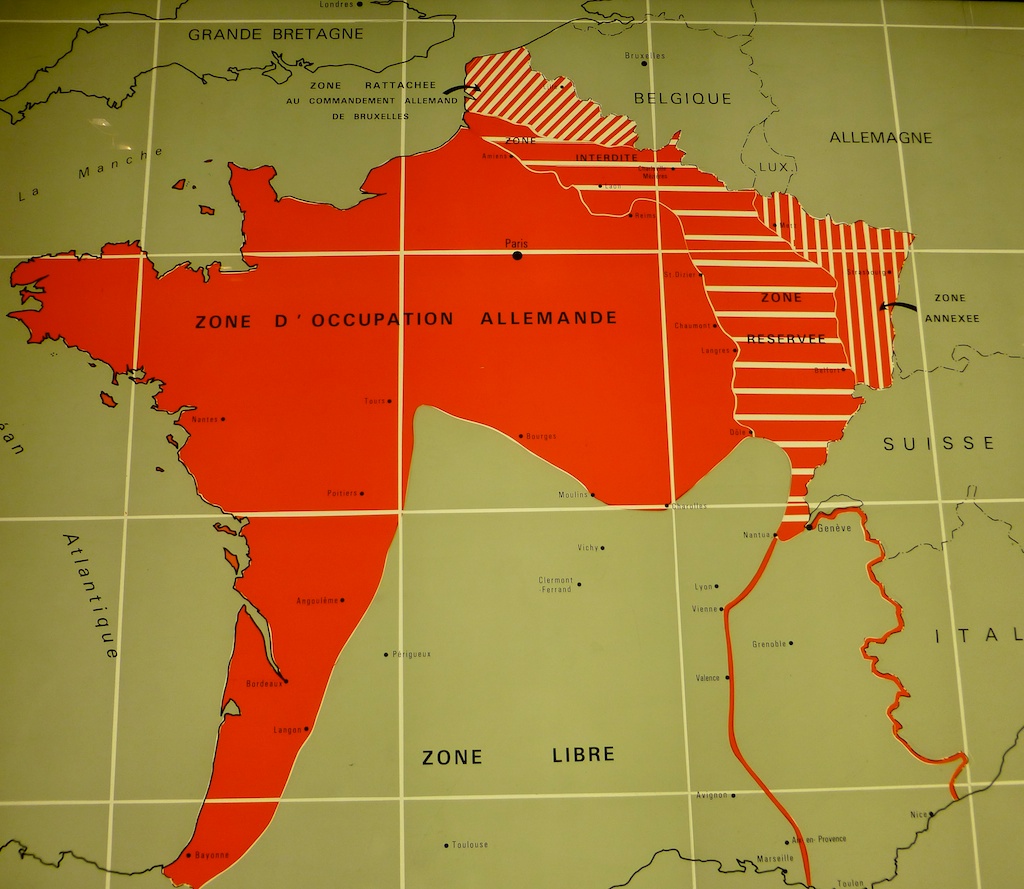 Whilst the north remained occupied, the country was split in two. ‘Vichy France’ to the south, was created under the ‘puppet leader’ Philippe Pétain who, wishing to prevent further loss of life, surrendered and subsequently cooperated with the Nazis. 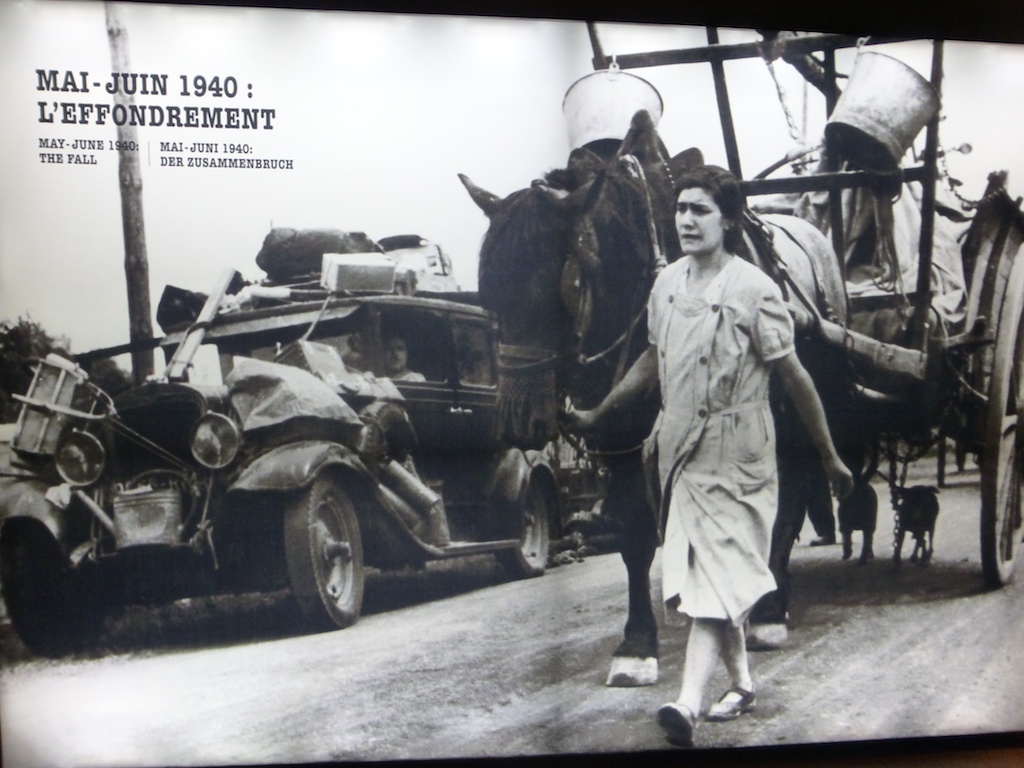 During this time the lives of the local people had been decimated. They lived with little to eat and in constant fear, unable to trust anyone. When the Allies arrived and the Nazis slowly began to be pushed south, the people of Normandy were jubilant. Sadly this enthusiasm was severely dampened by the subsequent Allied ariel invasion which destroyed many of the surrounding towns as part of the offensive to decimate the Nazi stronghold. 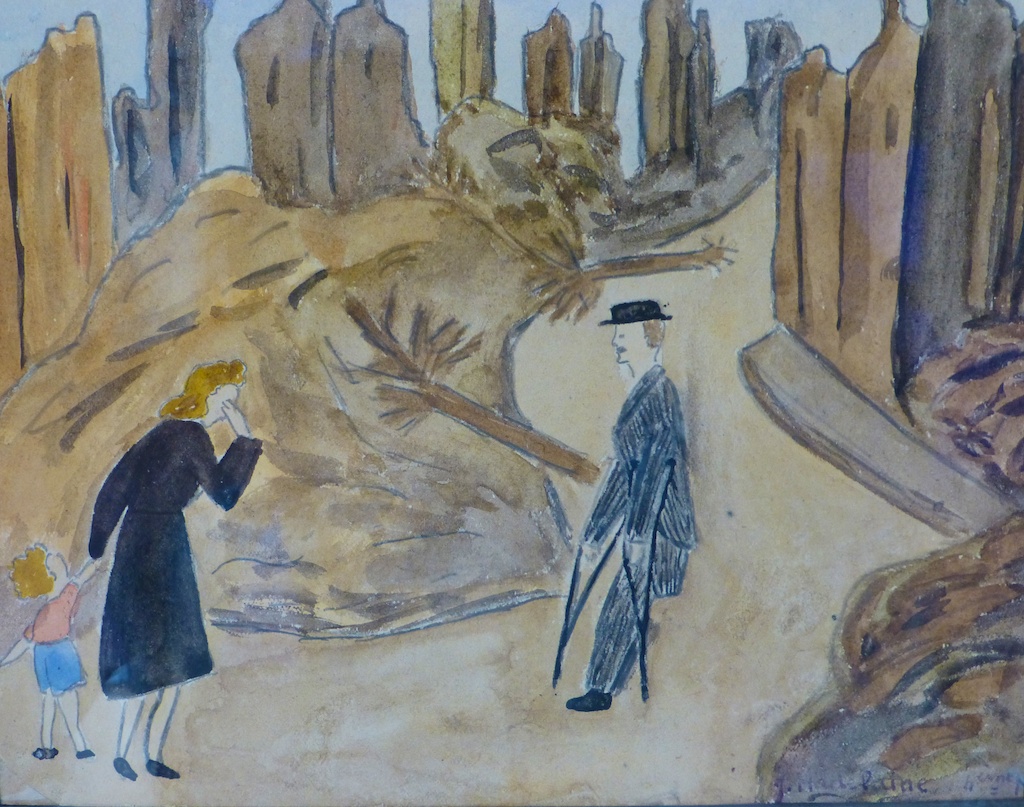 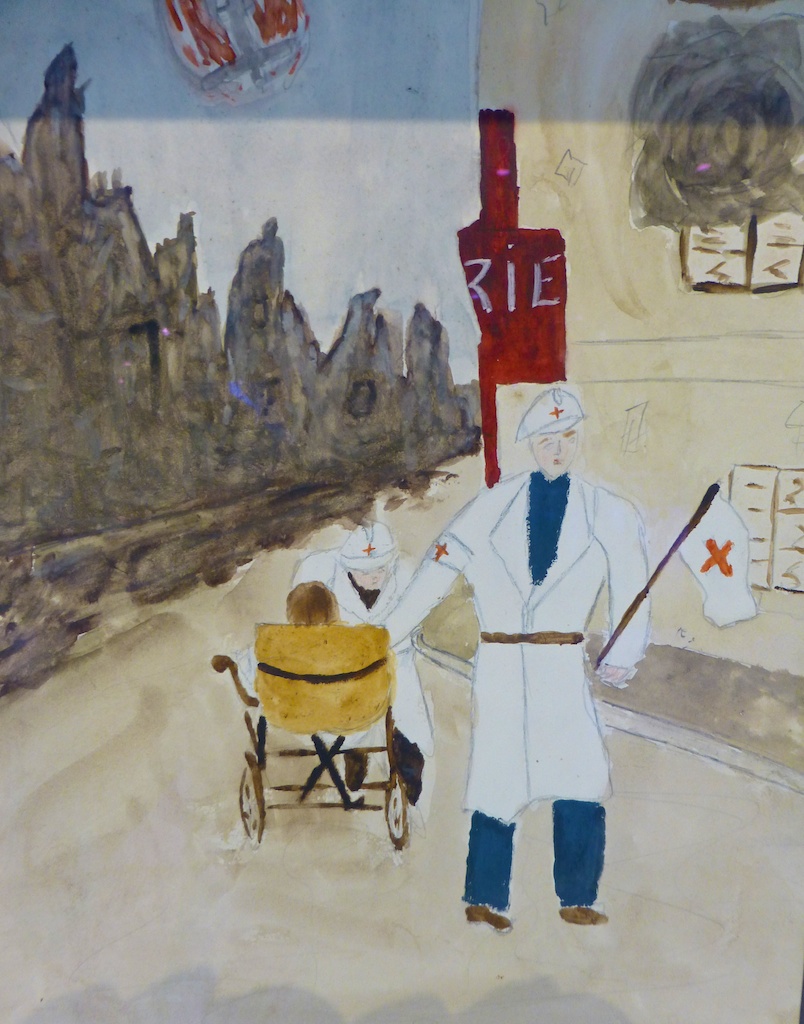 A small child’s dress, made from the remnants of an Allied parachute 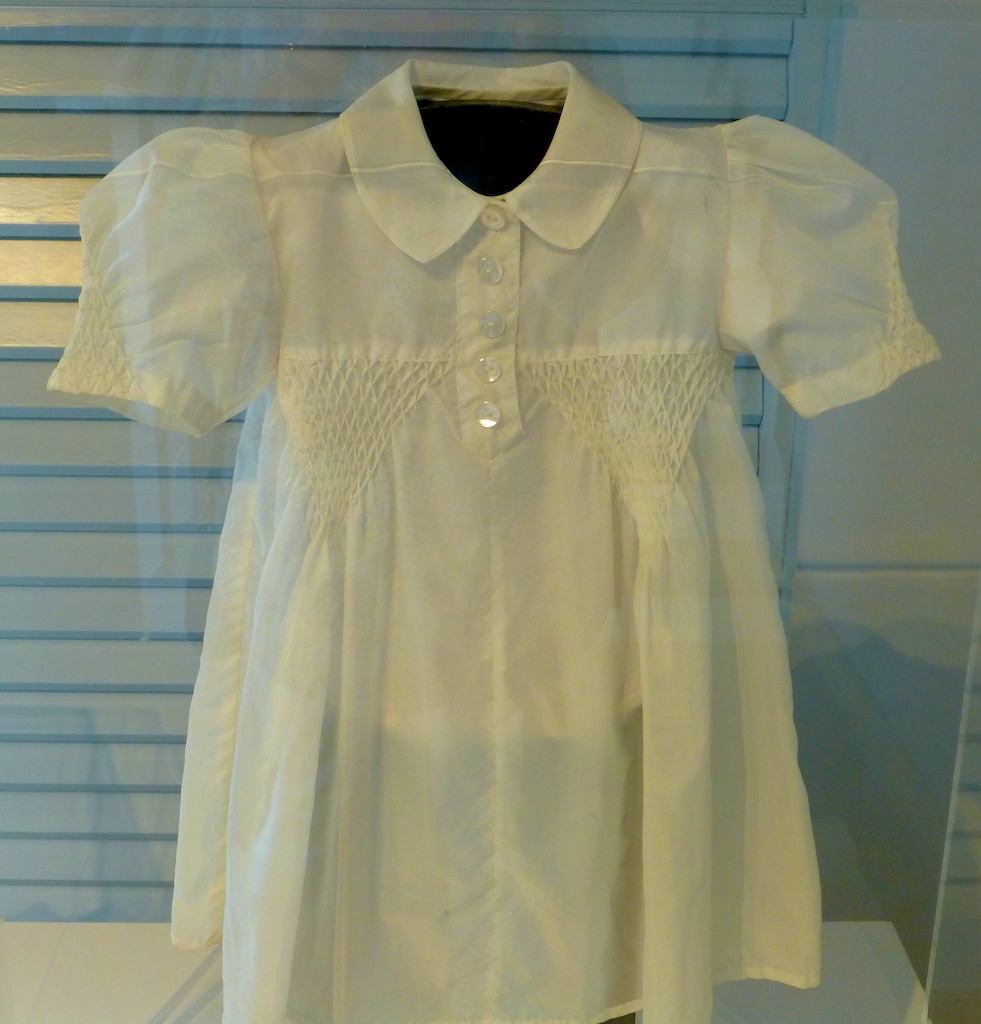 This was a dark time for the people of Normandy, who witnessed the almost total destruction of many of their beautiful cities and the death of its citizens, which continued until the end of August 1944

2014 memorial to D-Day outside the Memorial Museum in Caen 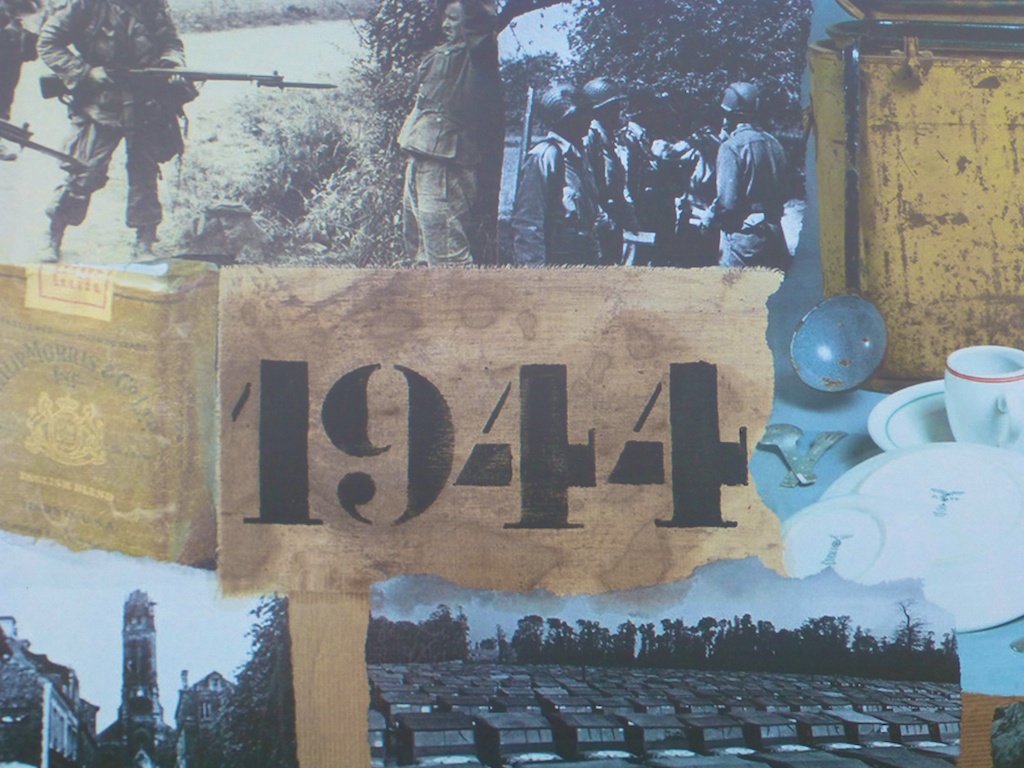 Allied pilots about to embark for Normandy 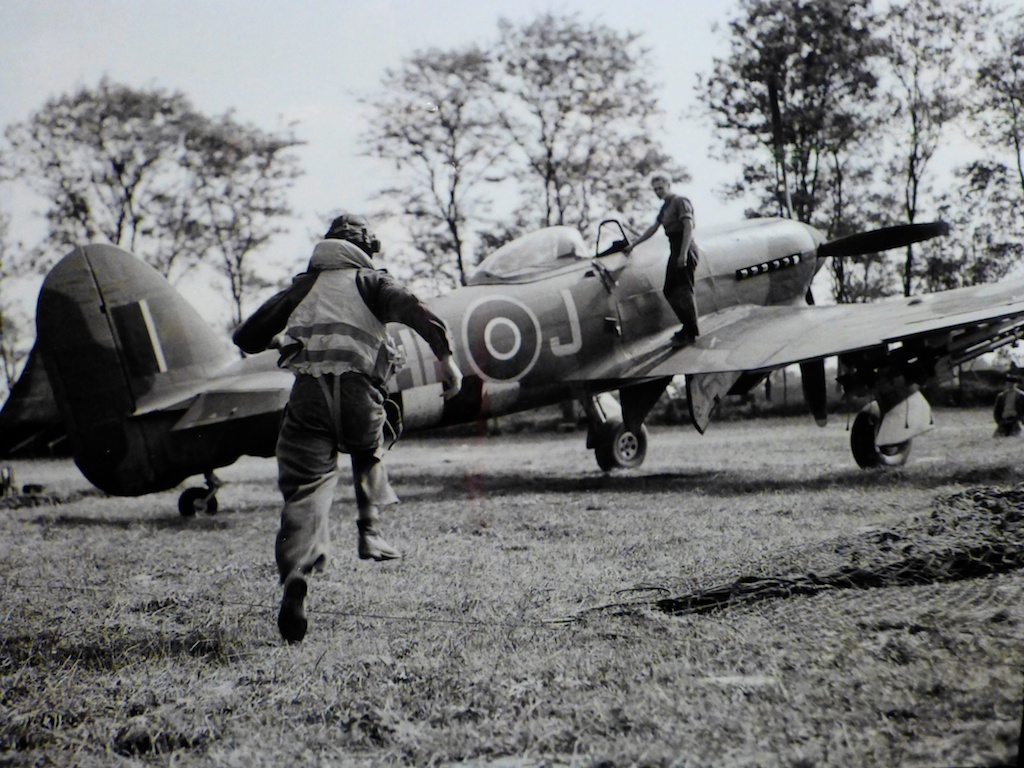 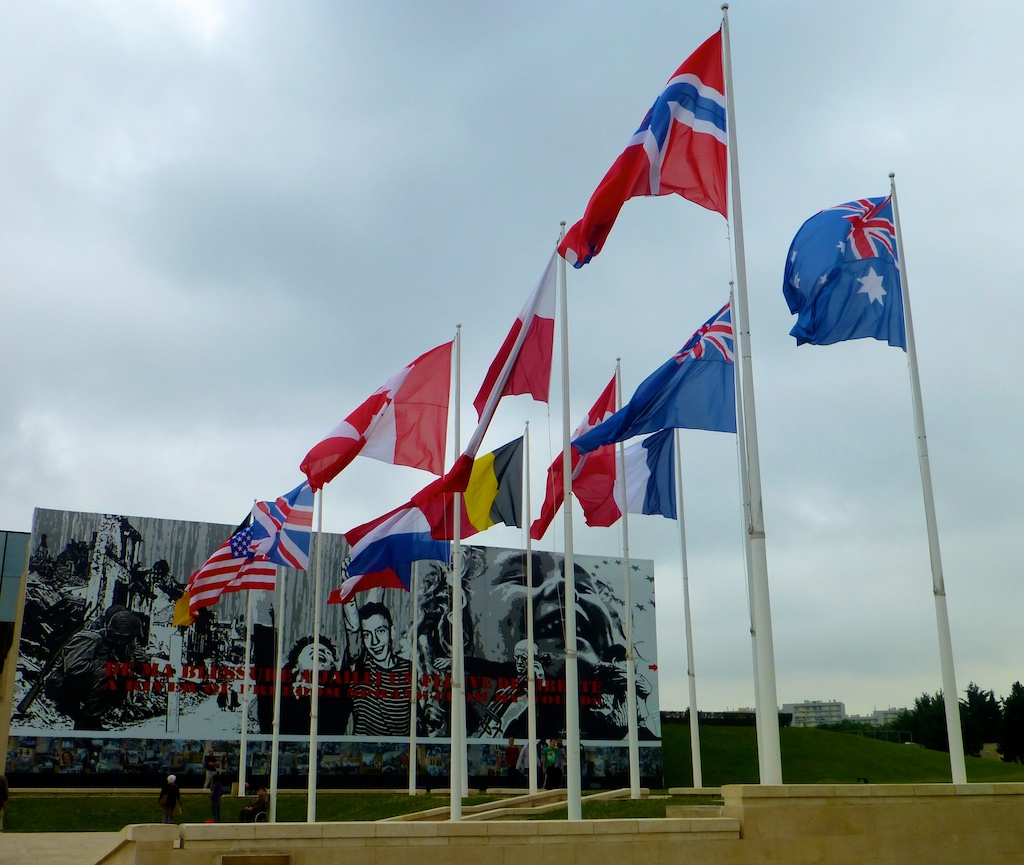 We should never forget…………. 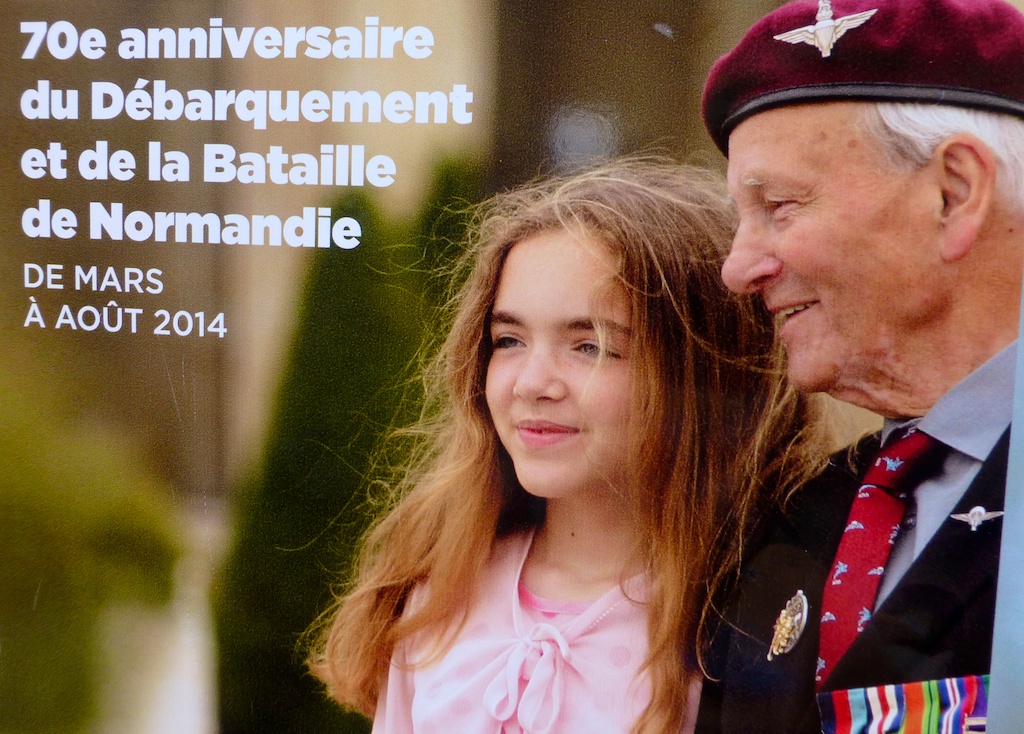 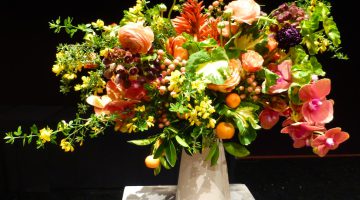