Yellowstone National Park is one of those places that people visit and enthuse over, urging you to go there too. I’m not sure what we were expecting. I knew Yellowstone was famous for its thermal area and was obviously excited to see its most talked about icon, the geyser ‘Old Faithful’. Nothing however could have prepared us for the wondrous spectacle of this incredible place.

There are several entrances to the park, we entered from West Yellowstone, just off the map to the west of Madison. 98% of Yellowstone is in Wyoming, (where we’d just spent the last few days), 3% Montana, 1% Idaho. 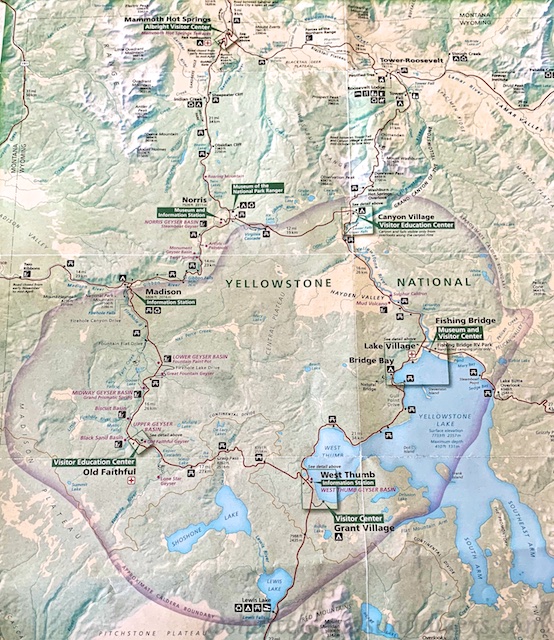 Initially, there is nothing to tell you just how remarkable Yellowstone is. The scenery is serene but you don’t immediately stumble into thermal areas or see anything especially unusual. 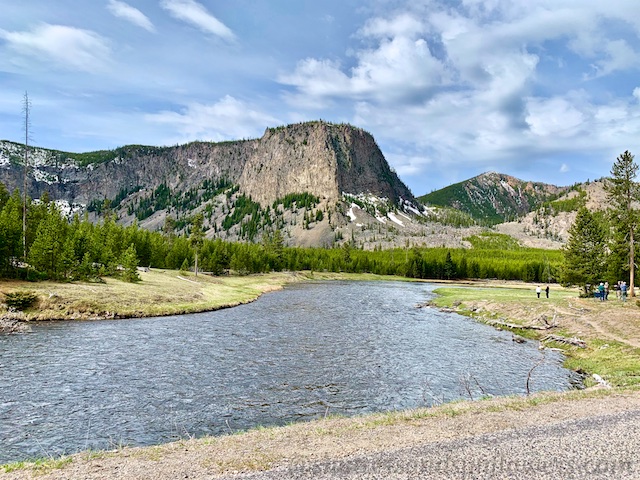 We had only driven a few miles when the cars in front became a weaving snake of red brake lights. After ten minutes of making very little progress we became concerned that our time in the park was going to be one long traffic jam. It was a huge relief to discover the reason for the delay.

The Buffalo at Yellowstone 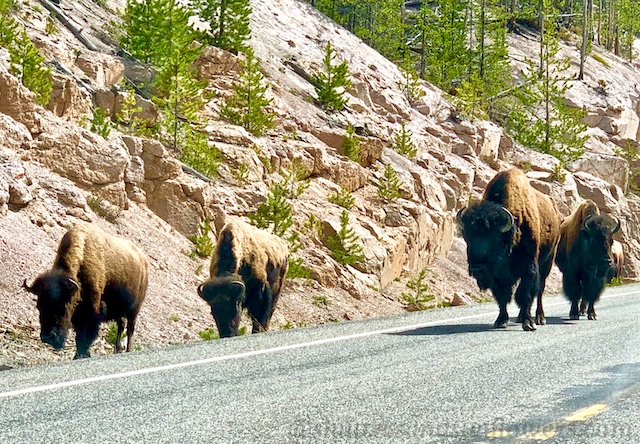 Totally unconcerned by the traffic, the buffalo ambled towards us. Perhaps a little too closely as they wandered past! 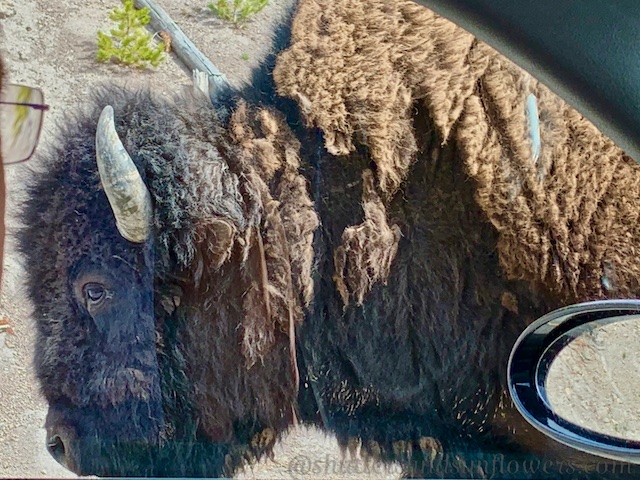 As we proceeded through the park these dozy, gentle looking creatures became a regular sight. It was hard to believe that they could be dangerous but like any wild animal they should be treated with respect and caution.

The heart of Yellowstone is a volcano. Over thousands of years huge eruptions occurred, the last being about 631,000 years ago. Eventually the center of the volcano collapsed to form a thirty by forty-five mile basin or caldera. The outline of the caldera is marked in purple on the map above, part of it was visible here. Astoundingly, it is the heat from those eruptions that still fuel the thermal activity we were about to discover. 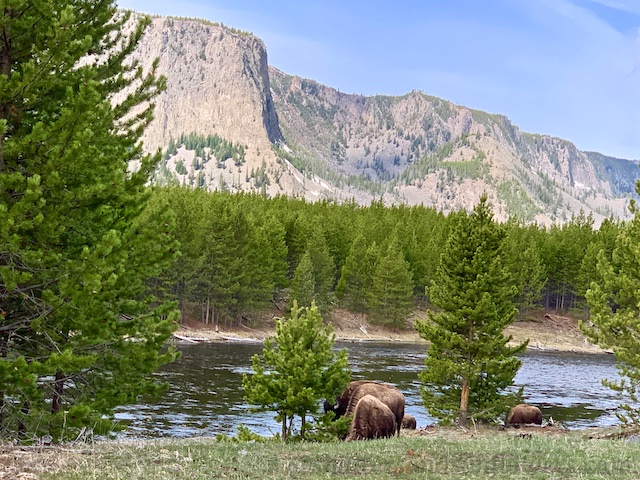 After about 14 miles, leaving the banks of the River Madison, we reached Madison, an information station. Yellowstone has two main loops, an upper and a lower. That night we were staying at Old Faithful, south of Madison, so we decided we would visit the upper loop first and take the lower loop to the south the following day. It was still early in the season and the road between Tower-Roosevelt down to Canyon Village was closed so we were not going to be able to complete the entire 84 miles. Once we reached Tower Roosevelt we would head towards the park’s north east entrance (just off the map, top right) to the Lamar valley before heading back. 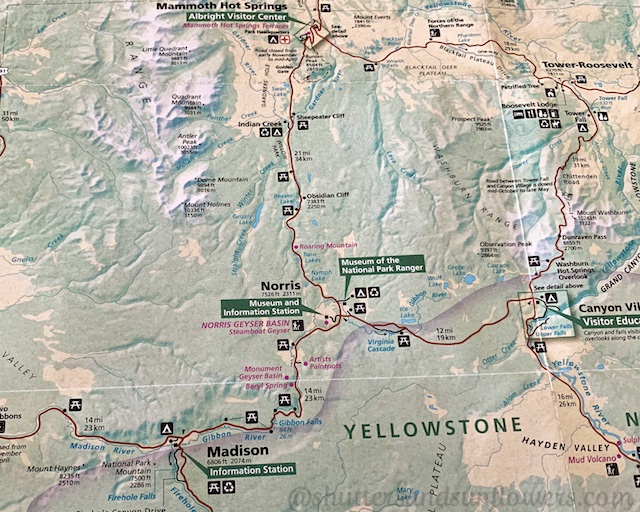 The road from Madison rapidly becoming surrounded by miles of dense pine trees. 80% of Yellowstone’s 2.2 millions acres is forest land, here this became very evident. The rest of Yellowstone is 15% grassland and 5% water. We found the roads well maintained with great information signs and services at most of the main centers. 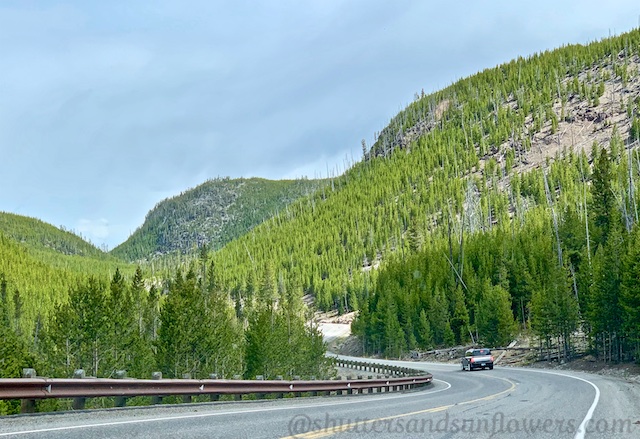 Our first stop, south of Norris (which we visited on our return) was at the Artist Paint Pots. We parked the car and followed a flat sandy trail through the trees. It took us to a place of total wonder. 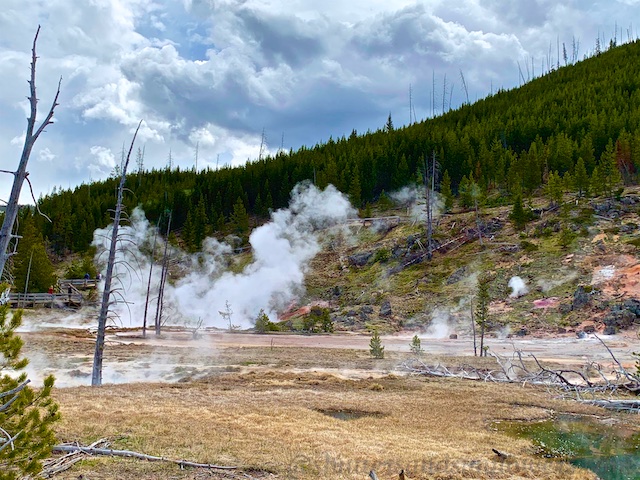 These thick, bubbling pools of mud are actually acidic hot springs. They have a poor water supply and are formed by the decomposition of the surrounding rocks by acid from volcanic gases and micro-organisms. 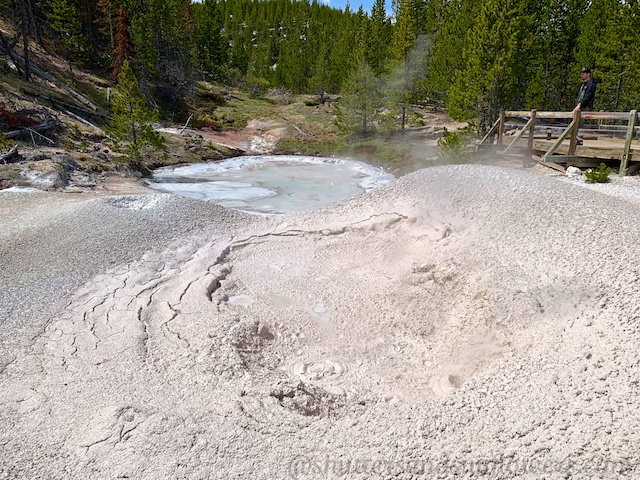 Following the wooden board walk trail we passed many of these steaming thermal pools. 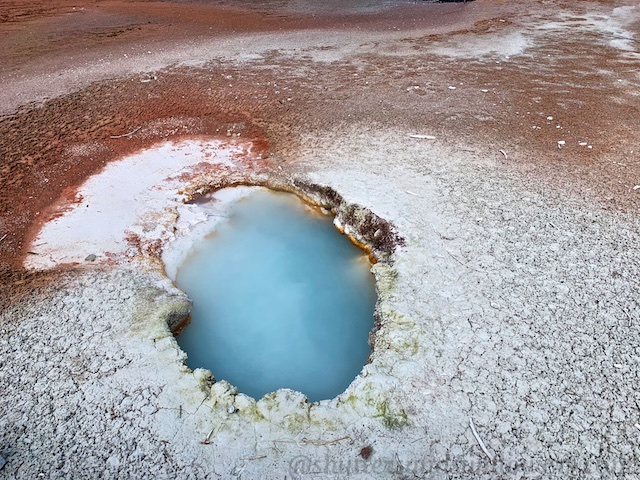 A final peak of Artist Paint Pots, one of nature’s hissing, steaming marvels. 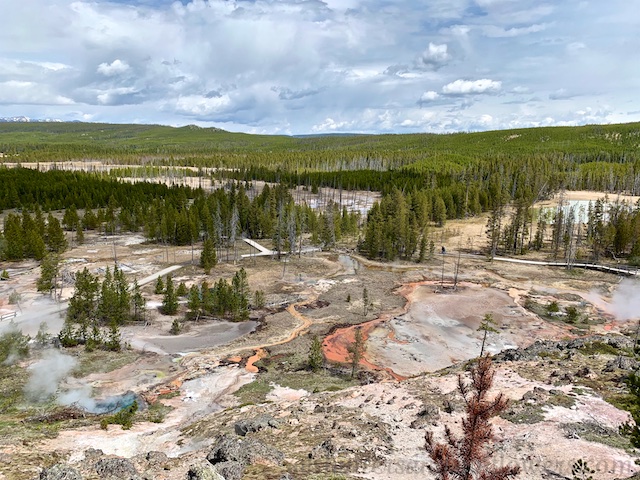 After we tore ourselves away the road climbed again and we suddenly found ourselves next to the sheer drop of a canyon, The Golden Gate Canyon. Bridging the canyon was one of the most challenging engineering feats completed in the park. The first bridge was constructed in 1885 but by 1900 it was dangerously unstable. It has been rebuilt several times in 1900, 1933 and 1977. 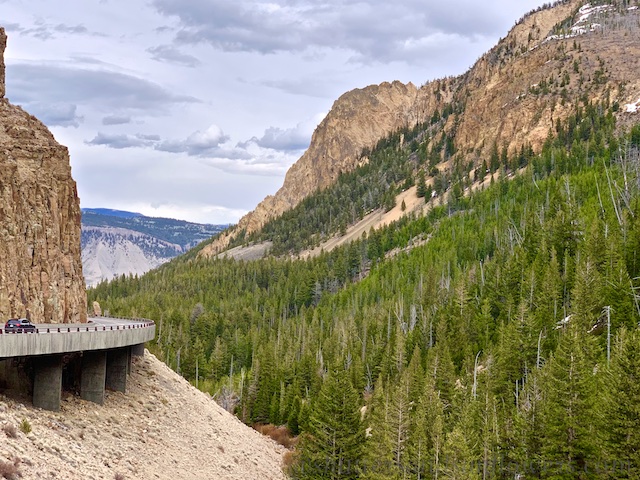 Yellowstone is a place of diverse extremes. Just when you think you can’t be surprised any further natural, your breath is taken away once more.

The black ‘devil’s thumb’, sits aside the ever changing travertine terraces. 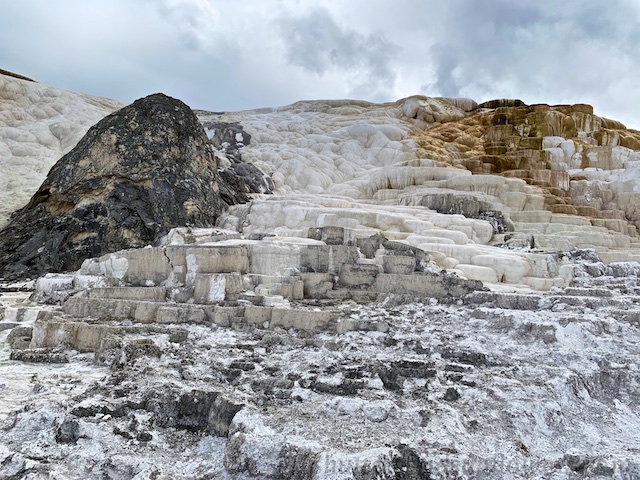 Beside the travertine terraces a hot spring cone shoots out of the steaming rock. 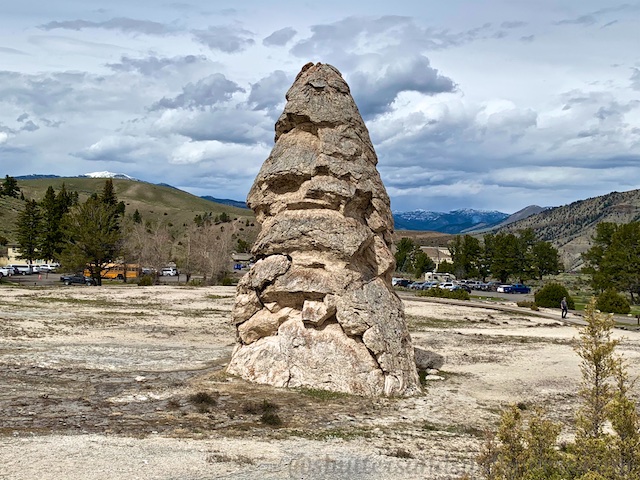 Deer were grazing in the pasture beside the park’s employee properties at Mammoth Hot Springs. 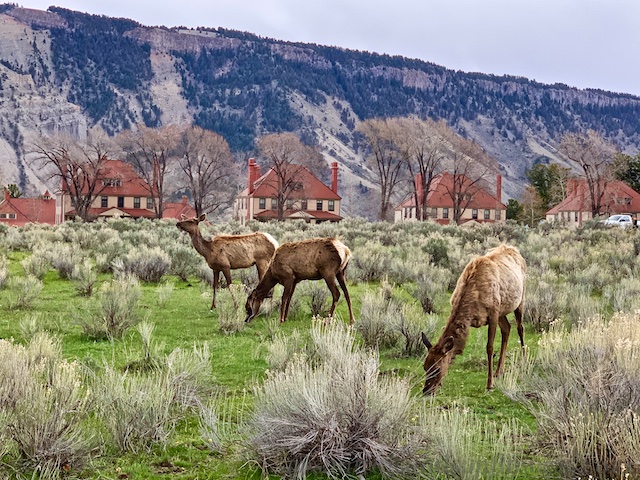 Edge of the Caldera at Yellowstone

Passing more of the caldera’s rim after Mammoth Springs we went towards Tower Roosevelt. 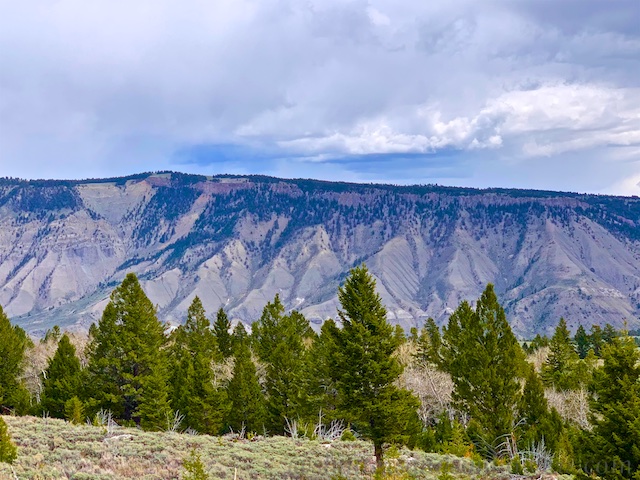 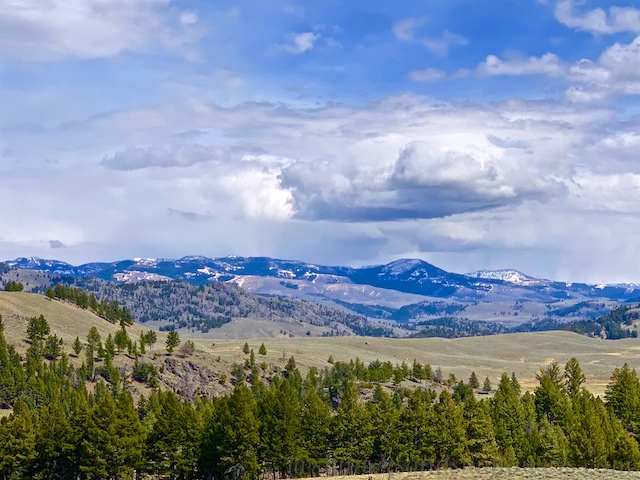 Eventually we reached the Lamar Valley, home to herds of buffalo, elk, grizzly bears and wolves who were reintroduced into the park in 1995. 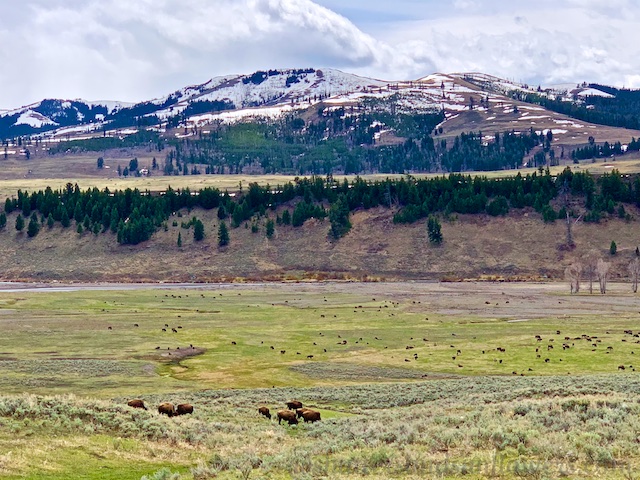 It was at this point we retraced our steps back to Mammoth Springs, passing more buffalo grazing on the rolling hills just beyond Tower Roosevelt. 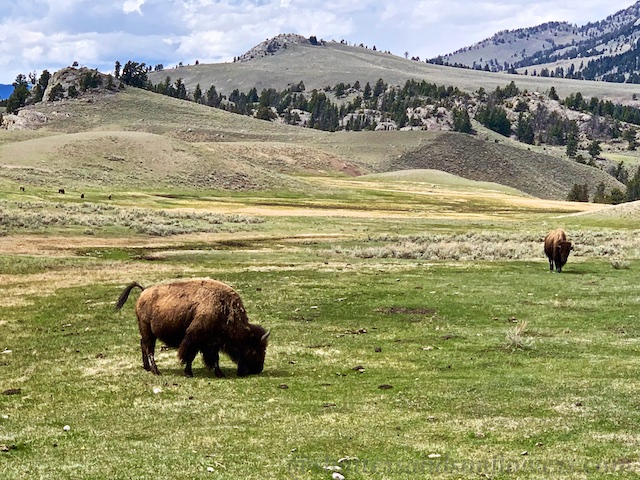 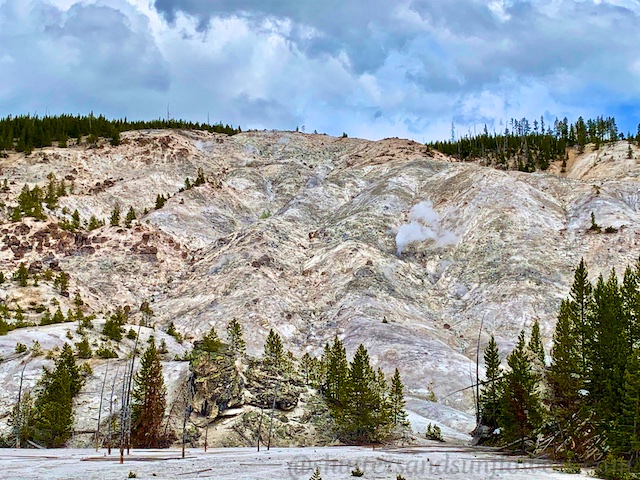 After Mammoth Springs we wound our way on towards Norris stopping first at this incredible steaming rock face, known as Roaring Mountain.

This astonishing thermal area was named after Philetus W. Norris, the park’s superintendent from 1877-1882. He recorded the hydrothermal features of this, the hottest, most acidic and most dynamic geyser basin in Yellowstone. Norris was also responsible for building some of the parks first roads.

The Porcelain half mile trail begins with a panoramic view of its steaming, bubbling landscape. 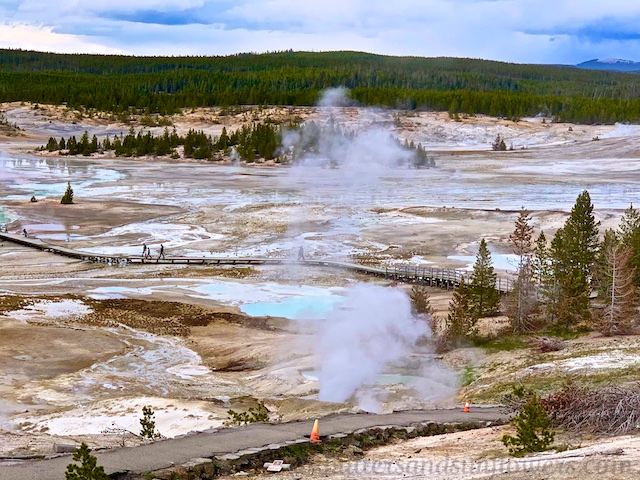 The one one and a half mile trail winds through the woods passing through a beautiful and bizarre basin. Heated by the Yellowstone Volcano, water travels upwards and erupts into acidic geysers, steaming fumaroles and simmering pools.

The color of a hot spring is usually determined by the minerals present. In a clear pool blue, the sunlight is absorbing all those colors except blue. This 27 feet deep pool is lined with sulphur which combined with the reflected blue light makes it appear this stunning emerald green. 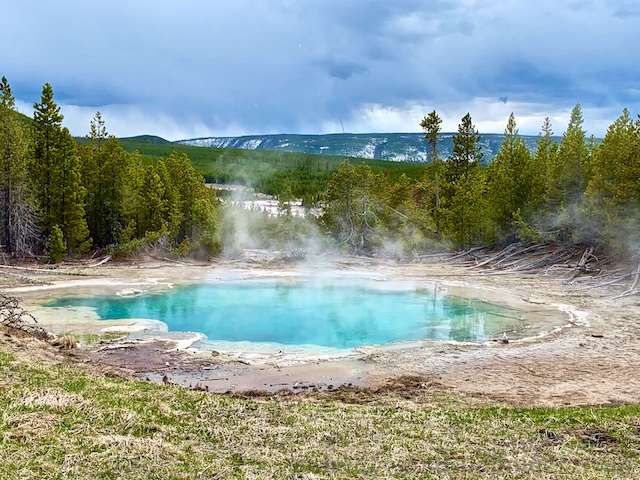 This is the world’s tallest active geyser. It erupts infrequently, the last time was October 14 2020. When it does erupt it can reach heights of more than 300 feet. 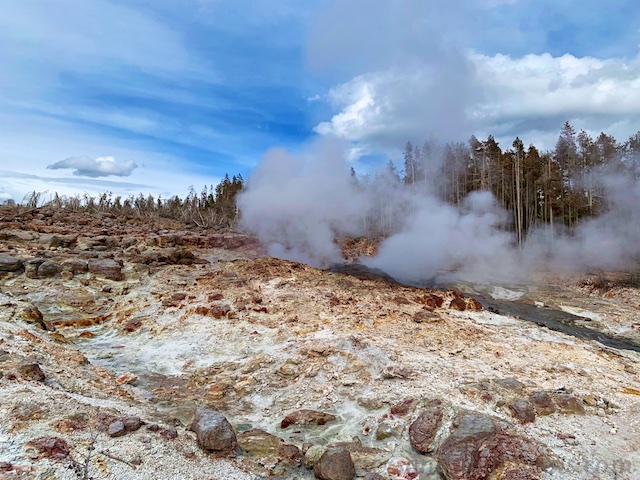 The varied browns, oranges and greens in this spring indicate the presence of algae and bacteria, which can thrive in temperatures far hotter than humans could tolerate. 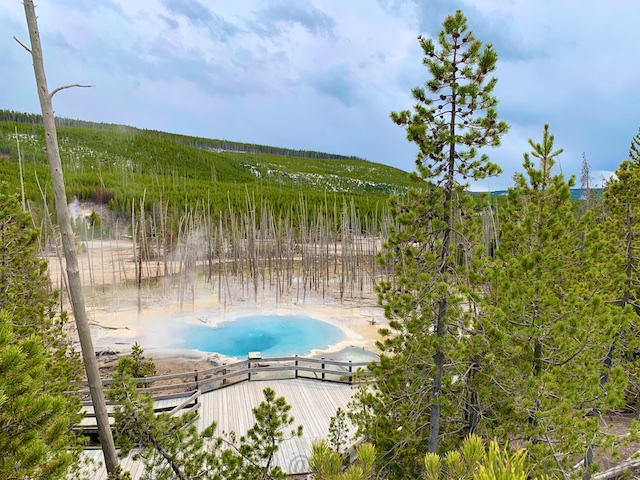 In 1878, the mineralogist Dr. Albert Peale named this geyser Echinus, because it reminded him of the spines of the star fish echinoderm. Echinus rarely erupts although during the 1990’s eruptions were more frequent. 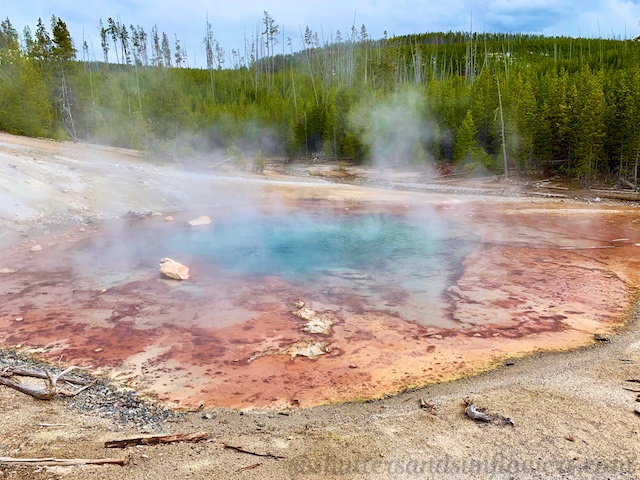 When early visitors reported the inexplicable sights they had seen at Yellowstone, few people believed their accounts of what they’d seen. Bubbling mud, steaming rocks, hissing geysers set within an enormous forest with rivers and vast plains of grazing wild animals; it was literally fantastical. With no cameras to verify their stories it wasn’t until artists were dispatched to record these incredible wonders that people began to listen.

In 1872 the American Congress passed legislation to create the park, the first national park in the world, preserving and protecting it for eternity. Thank goodness that they had such foresight.

Tomorrow we will explore the lower loop of this phenomenal and wondrous place. 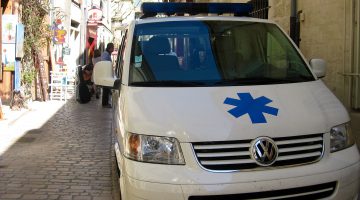