France, and especially southern France is famous for its perched villages, Les Baux-de-Provence is one such stone bastide, which clings, seemingly quite precariously, to the hillside. Mostly built in the Middle Ages on carefully chosen prominent rock faces, offering the best vantage point for protection from potential invaders.Once immersed in the enfold of ancient stone buildings and winding cobbled streets the modern day visitor cannot fail to be both impressed and charmed. 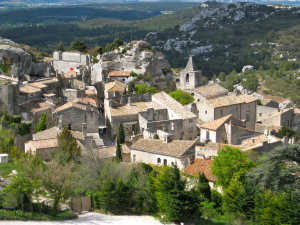 Les Baux-de-Provence, dated back to the tenth century. Nestled on a magnificent 804 feet high rocky escarpment, (in provençal, “bau” means ‘rocky escarpment) standing high above the caves of the surrounding Alpilles hills it is utterly captivating. Les Baux’ strategic position meant it was settled early, both by Celts and by Romans but the height of its power was in the early Middle Ages, when it was dominated by the fiercely ambitious princes of Les Baux, who controlled 79 towns and villages in the region. They claimed to be the descendants of Balthazar, one of the Three Wise Men, and the 16-pointed silver star which guided the kings to Bethlehem is still on the municipal flag. 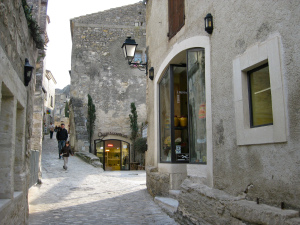 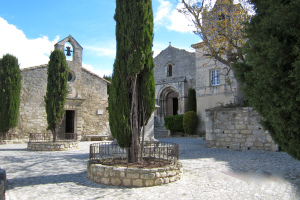 In 1642 the town was granted to the Grimaldi , of Monaco, as a French marquisate, the title of Marquis des Baux remains with them. The family have visited the tiny 12th century church, Saint Vincent’s, a ‘troglodyte building’ i.e. it’s partly carved into the rock. It is spellbinding in its quiet simplicity. 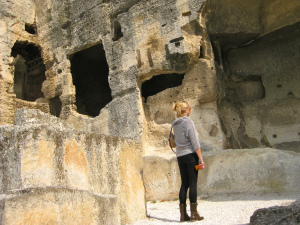 Having ambled through the winding streets there are the ruins of the once majestic chateaux to explore. With a little imagination, after a fine glass or three of vin rosé you are transported back to a bygone era. If you listen carefully you can hear the swish of arrows ascending from the elevated fortress walls. Swords clashing and men far below scream as they charge and the ram the guarded entrance way, dodging whatever is being hurled at them.

Les Baux is positioned high above the surrounding flatlands, ‘Le Crau’, an important stretch of the Via Aurelia, the Roman road connecting Arles and Aix-en-Provence. It commands a splendid vista over acres of olive groves and vineyards, offering a view of Provence that dreams are made of. It is almost possible to see the ocean on a clear day and the distant sights of Nimes and far off Marseilles.

I found this wonderful extract written by André Suarez, (1868-1948) a French writer and poet from Marseille, whose love and passion for of Provence, a bit like mine, was deeply rooted in his soul. He was buried in Les Baux de Provence, July 8,1950. For me it is an excellent description of this enchanting place: “…I longed for the pine trees and olive groves […] Everything here speaks of families and eternity.” “I know of no place more admirable than Les Baux. The countryside separates us from all that we find offensive […] It reveals all that we have which is great, all that is real; it turns this inner greatness into a vocation […] In Les Baux, grandeur has charm and charm is filled with a sense of grandeur.”

Previous Article Can the French Cook? 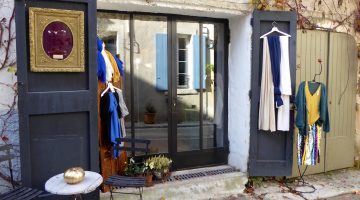