The Grand Tetons looked even more stunning on day four of our American road trip. Capped in white, they lay strung before us, the cornflower blue skies creating the perfect back drop to accentuate their wonder as we entered the Grand Teton National Park for a second day. 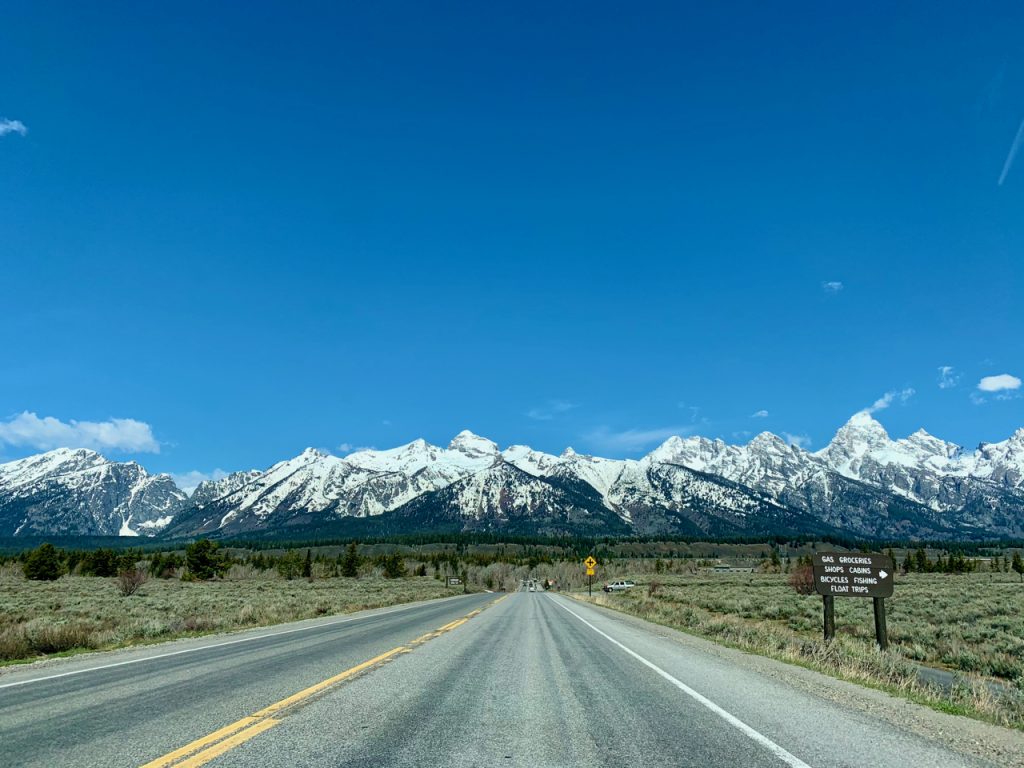 The approximately 2.7 billion year old rocks found in the Grand Teton’s core are some of the oldest in the USA, yet surprisingly The Grand Tetons are one of the youngest mountain ranges in the world. The Tetons rise abruptly from the valley, having nothing to obstruct their view they are dramatically breathtaking. 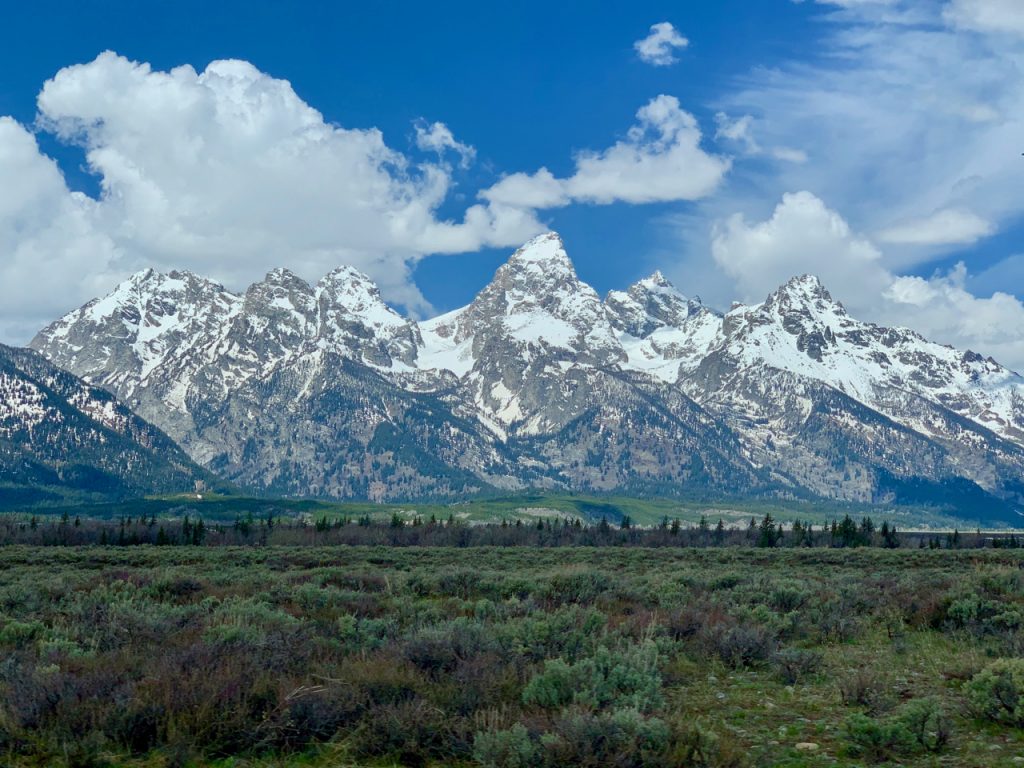 As you pass through the valley, this is what makes them such a spectacle. To one side of the road are these soaring, jagged mountains, on the other, gentle undulating plateaus which at times seem almost flat. 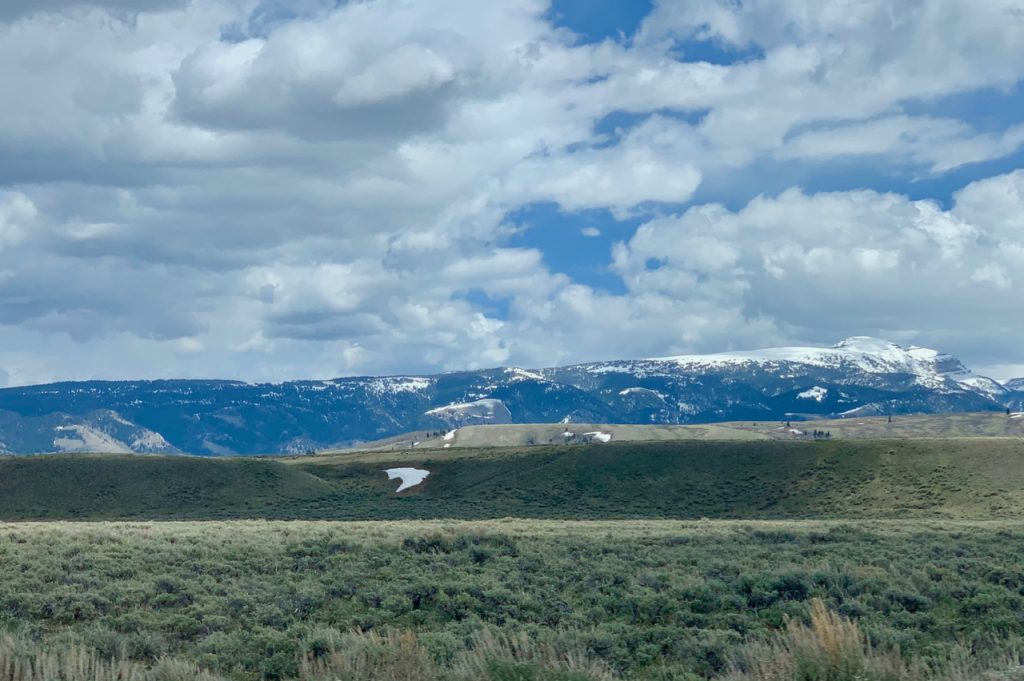 Such exquisite peaks provided the perfect backdrop for some more posing! Not too much because we were going hiking. 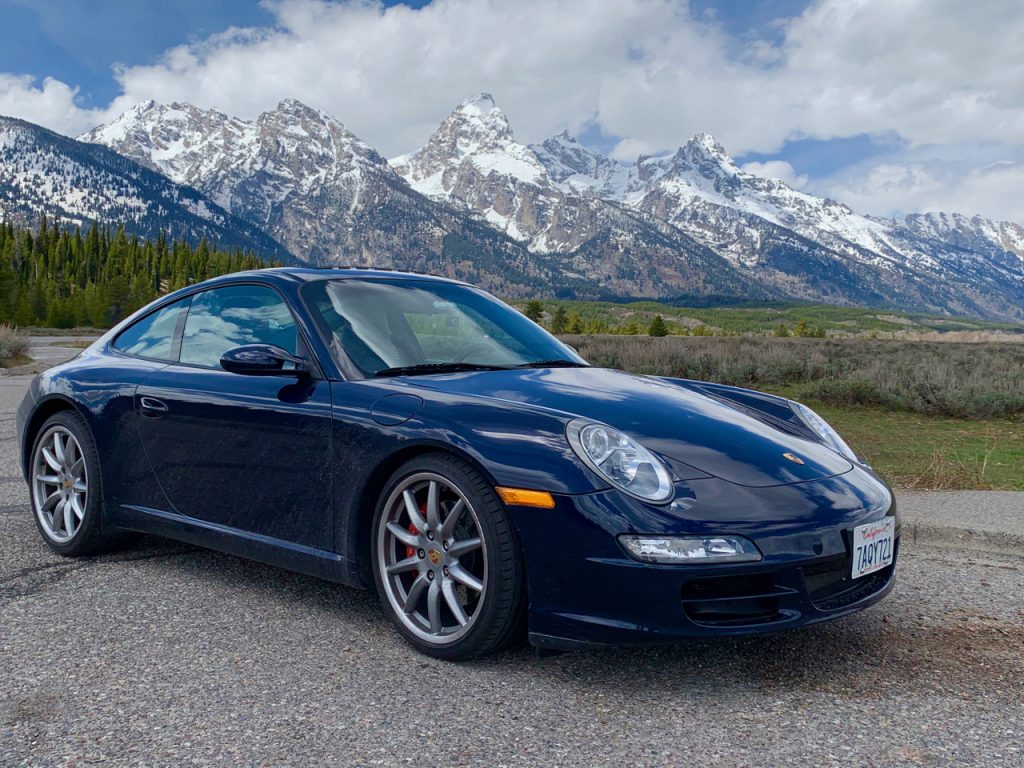 The Creek by Jenny Lake

It was a pleasant 65 degrees. We parked our wheels and took the path across the creek. We were told Hidden Falls was an easy hike just over a mile away. 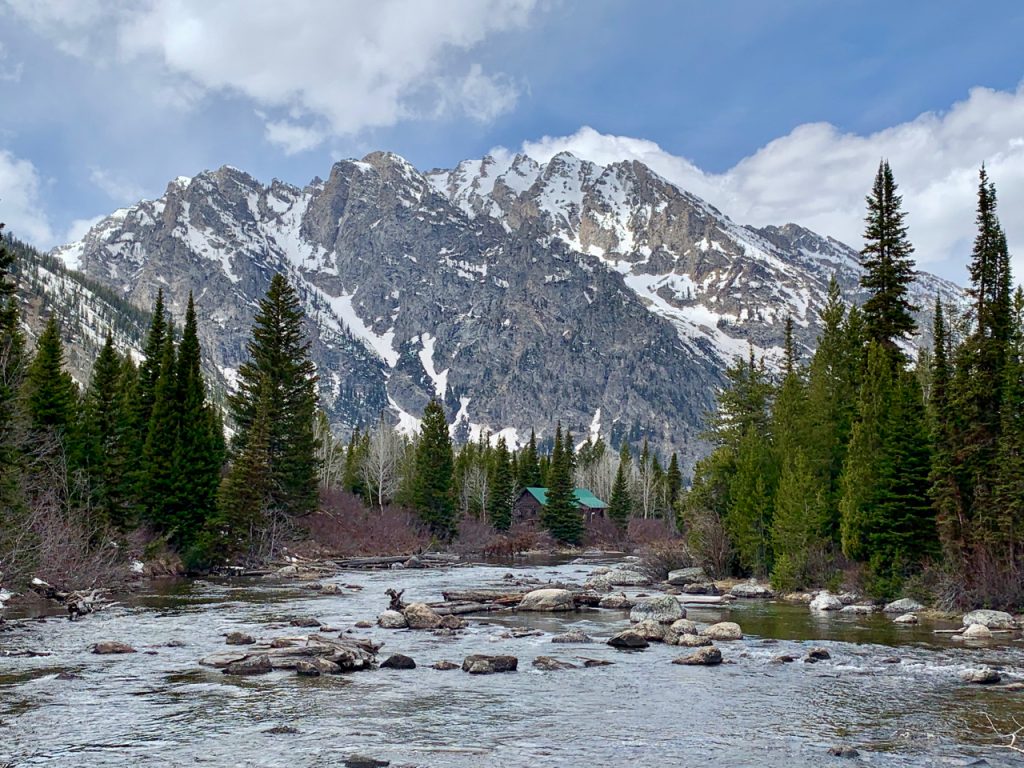 The views were stunning as we made our way along the trail. 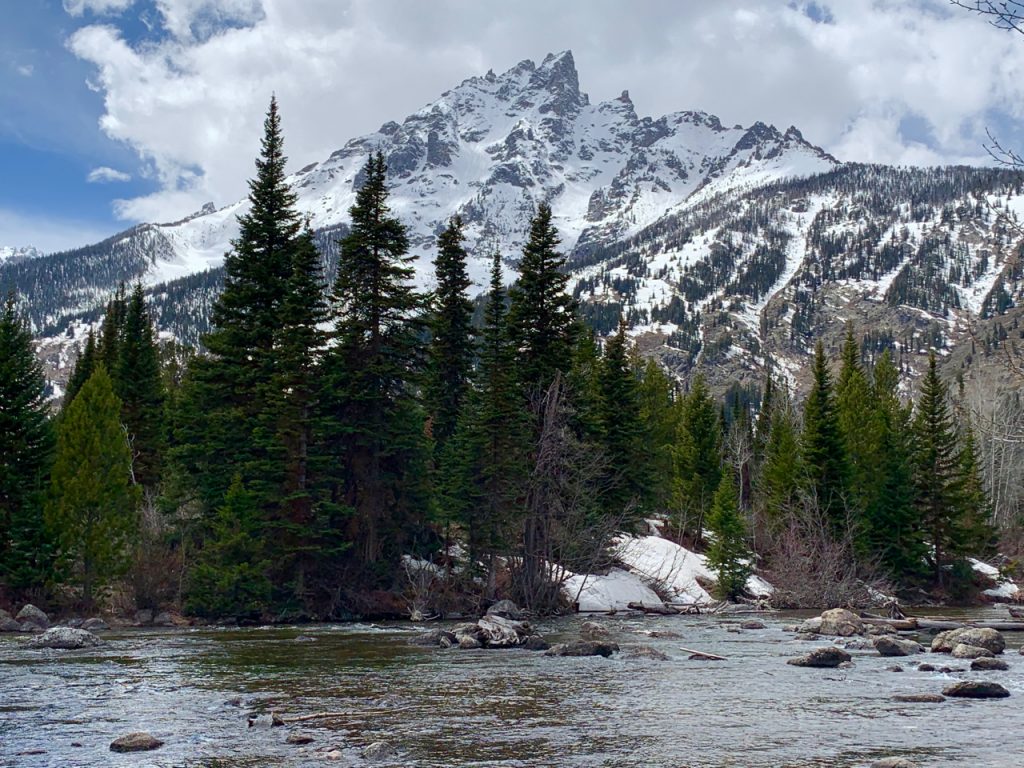 Every so often we were treated to glimpses of Jenny Lake. 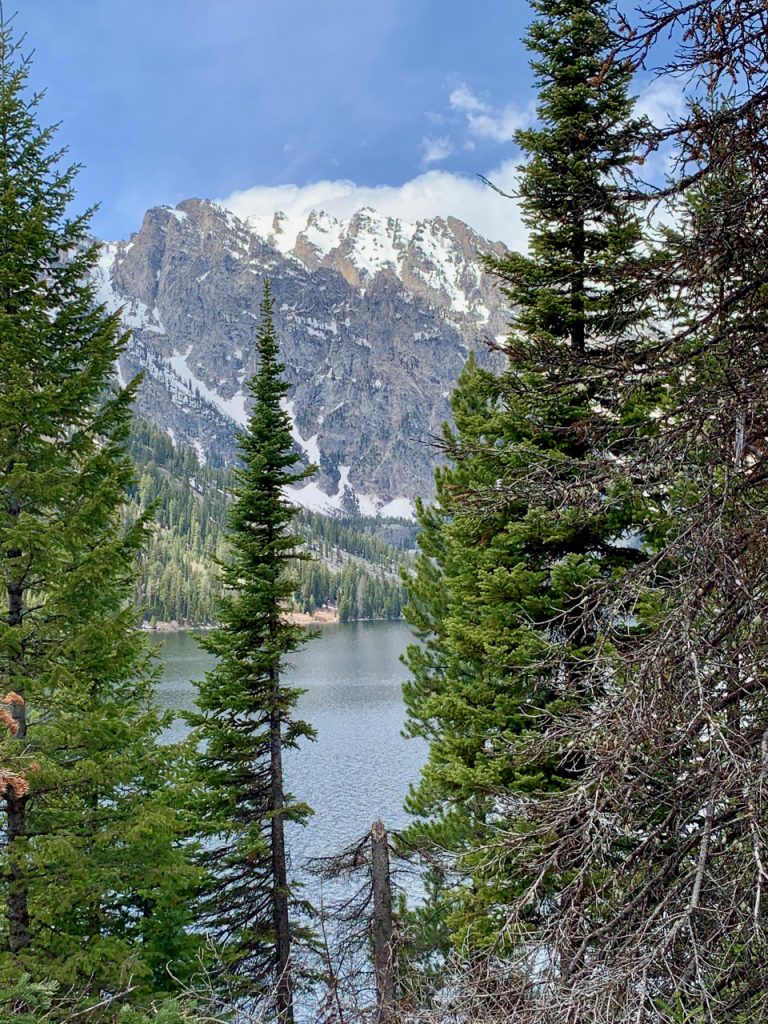 The pine infused air and lake side vistas reminded us of Tahoe. The occasional banks of snow by the water told us that nature had only recently shed her winter gown. The sandy path through the trees was easy enough. 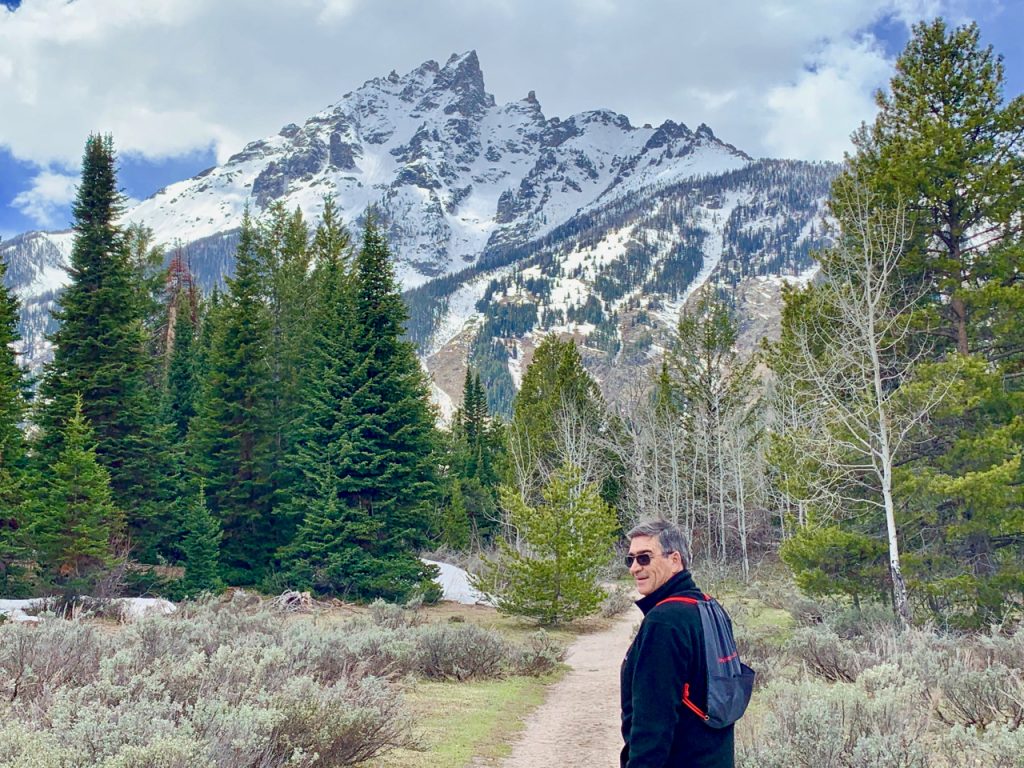 But then it became a little more challenging. An hour passed without even the faintest sound of any water rushing over rocks. Stumbling somewhat, we went higher and higher, negotiating a snow covered trail that was increasingly slippery and rutted. 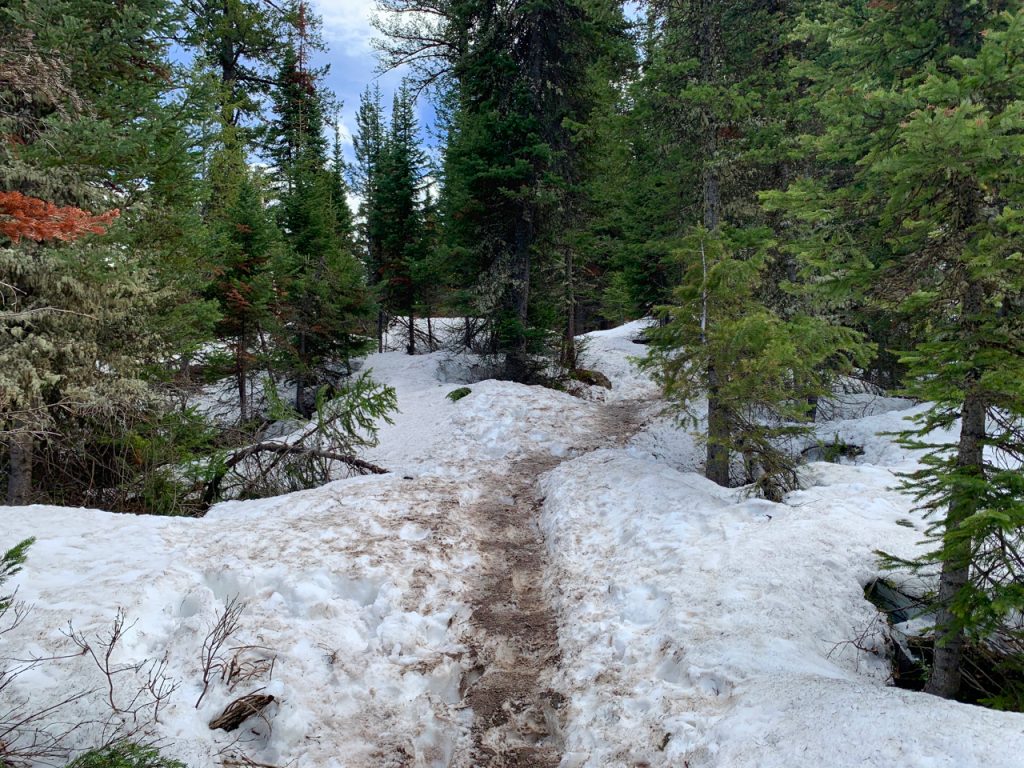 The site of a small beaver, well we think that’s what this furry creature was, cheered us forward. Having passed several signs urging the importance of carrying bear spray, we were grateful that we didn’t see anything bigger… 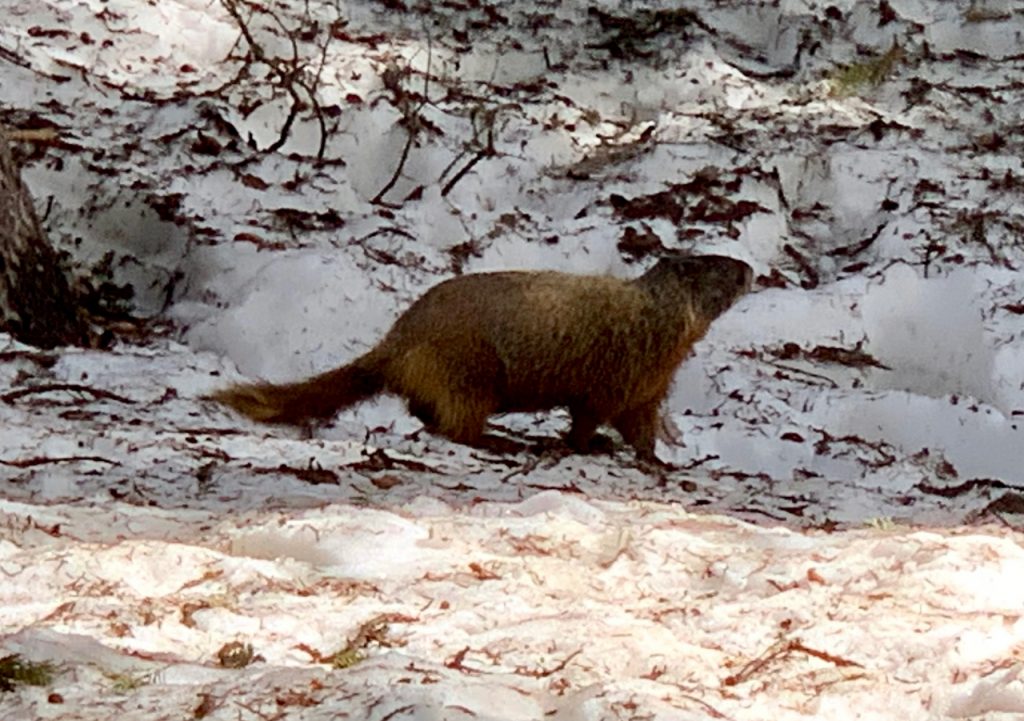 It was closer to two hours, not one, before we finally found Hidden Falls. A cascading, frothing band tumbling its way over the boulders down the mountain side and aptly named, Hidden Falls were well and truly hidden! 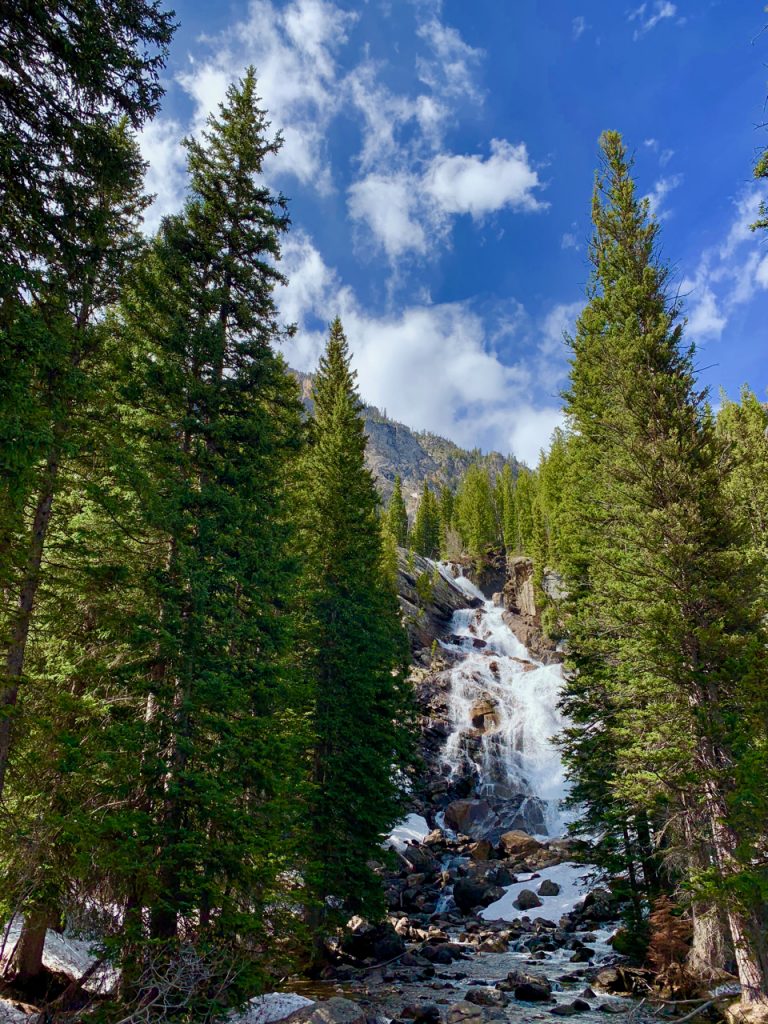 We were triumphant, albeit with aching feet. 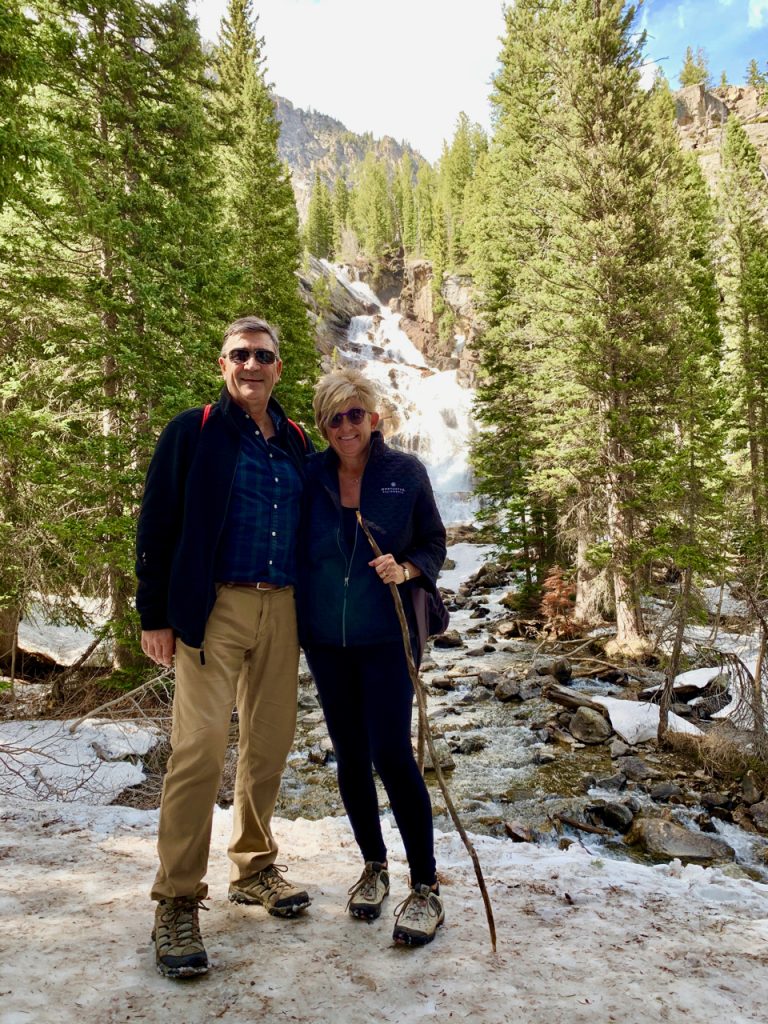 Of course it was worth it, except now we had to return……

Eventually we were back by the sparkling vistas of Jenny Lake, 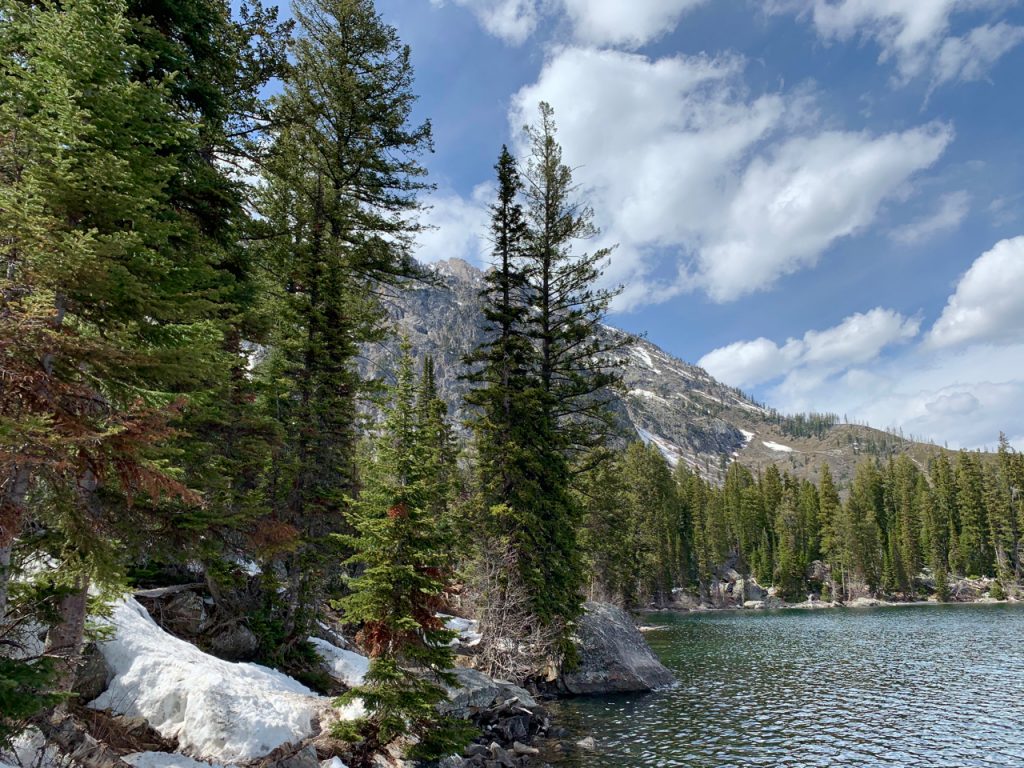 and making our way back through the park. 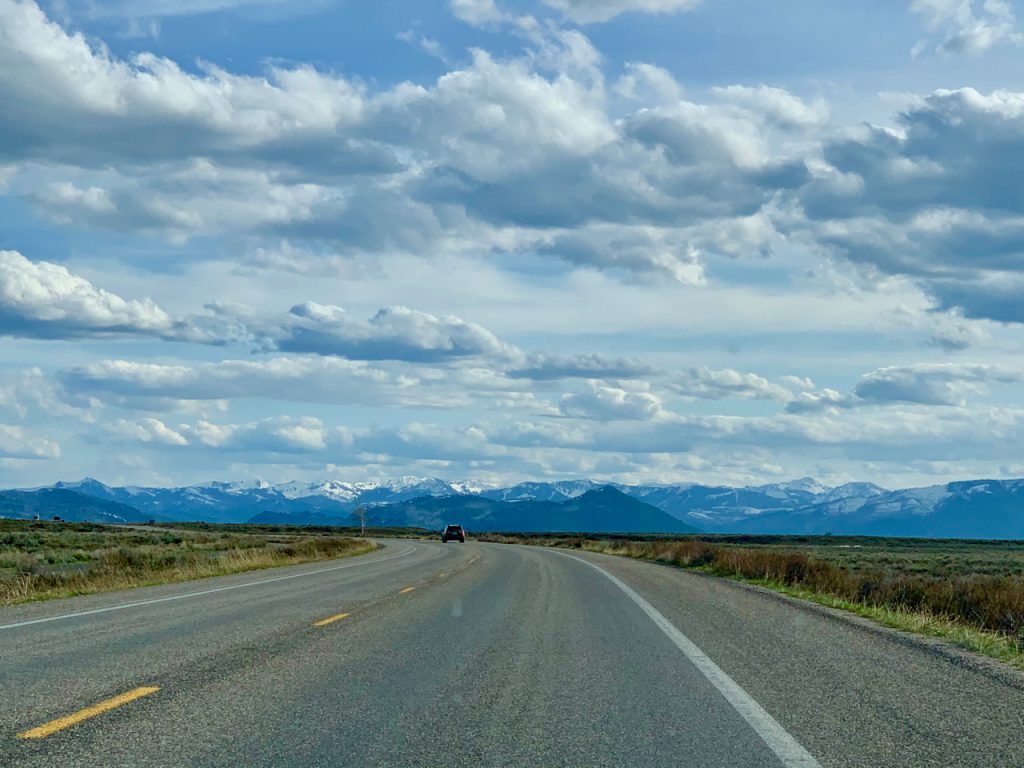 We found ourselves following a van from La Belle France, not a car registration you see every day in the U.S. of A! 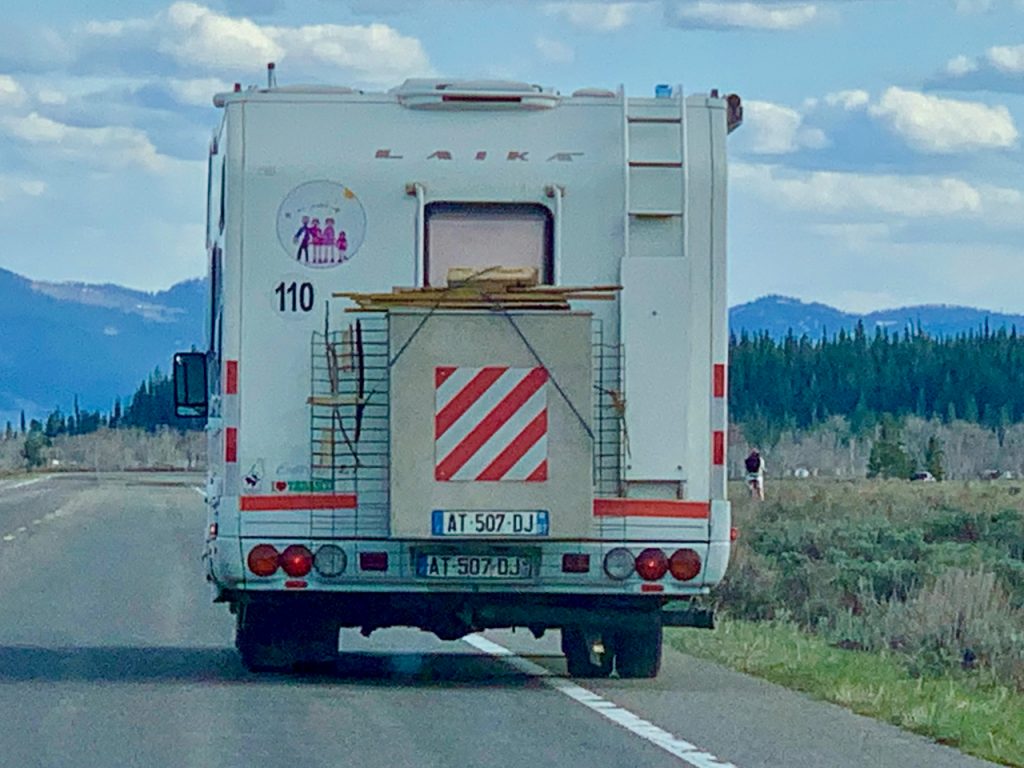 Safely back at The Anvil we parked near this remaining remnant of the hotel’s former life. How cool that it was kept. 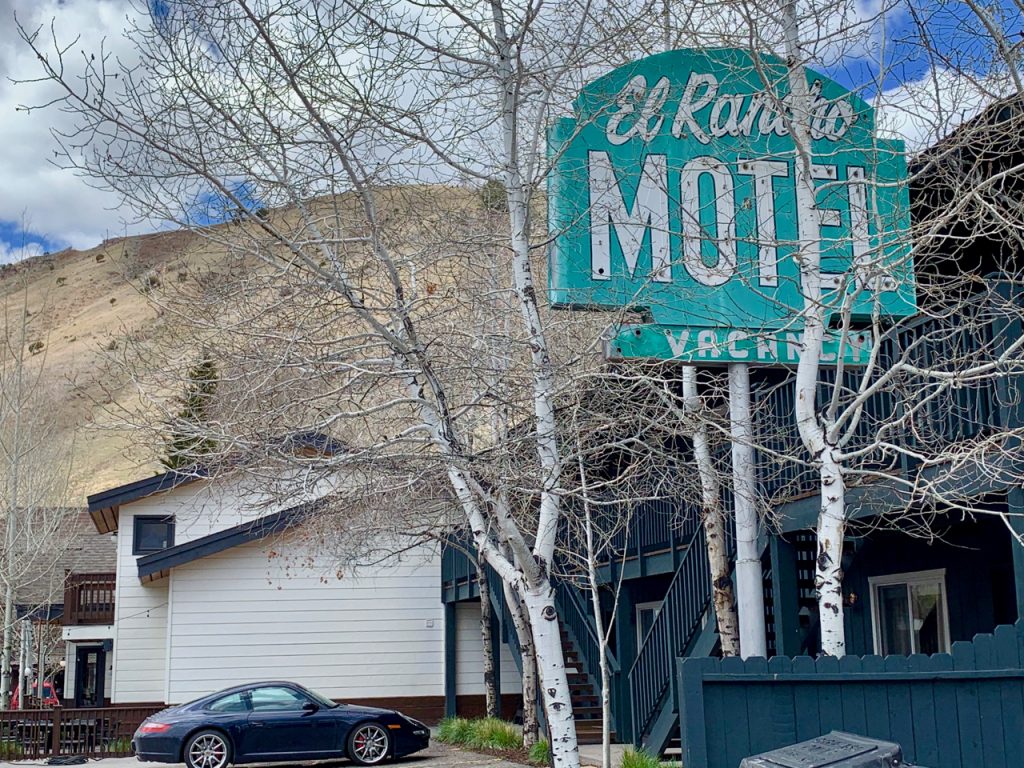 The Salt Flats of Utah and Deer Valley felt far way, as did our drive through Wyoming to get to Jackson. We’d already driven about 800 miles and tomorrow, after returning to The Grand Tetons we are Yellowstone bound, see you there! 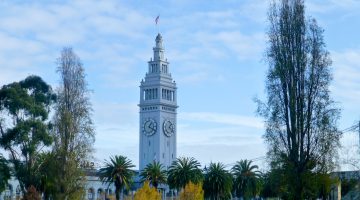