Bruges, Belgium, a little out of way when driving north through France to Calais but we couldn’t resist revisiting this fabulous UNESCO World Heritage city again, especially as our previous visit had been 27 years ago and fleeting at that, on a damp February day! This time the weather co-operated and we saw Bruges at her very best, it really is an extraordinarily beautiful city, well deserving of its World heritage UNESCO status. Steeped in a rich history with breathtaking, medieval, Flemish architecture at every turn, Bruges is situated on a canal system just minutes from the port which hundreds of years ago helped establish it as an important trading center. It is easily accessible by Eurostar from England and if you are driving, just over an hour from Calais. In a European city like Bruges it is often well worth considering B&B’s where you can find yourself in a far more captivating, boutique environment with more attentive, personal service for far less money than a hotel and your experience will be far more reflective of the place you are staying. In Bruges we stayed in Sint Nicklas, a delightful B&B very conveniently located behind the market place. Our room was very comfortable and well appointed and Anne our hostess could not have been more friendly and helpful suggesting places to visit and eat, seeing us off each day with a delicious breakfast.

The Canals of Bruges

Boarding the boats for the canal in Bruges 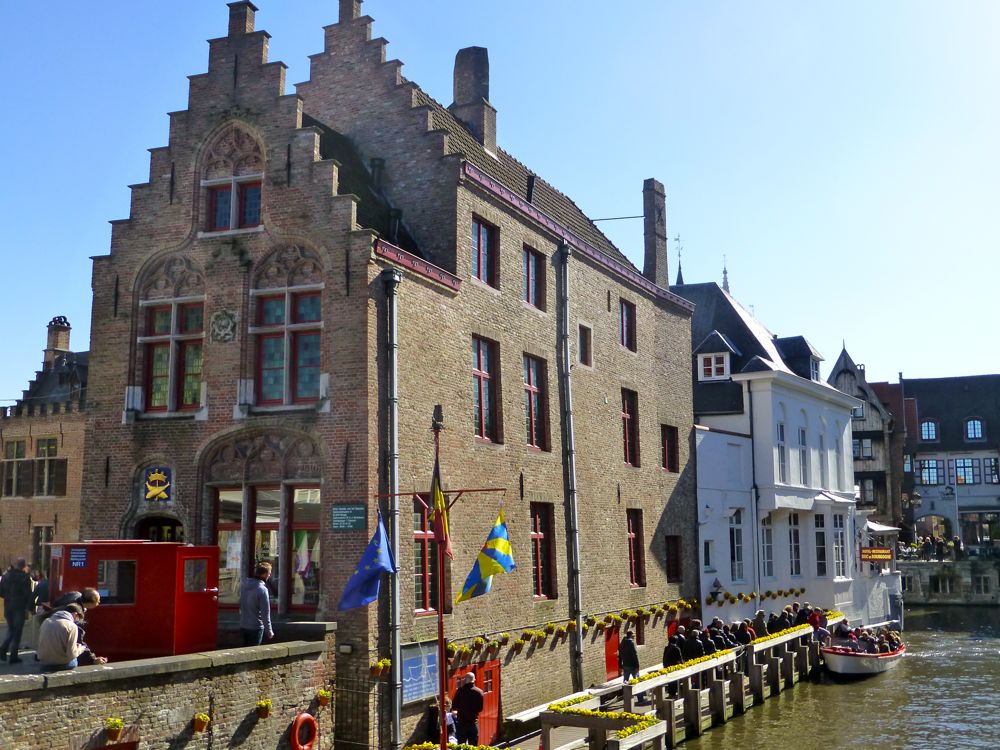 The famous market square in Bruges, located in the heart of the city, dates back to 958 and was the medieval, commercial centre of Bruges. Covering an area of about a hectare, today it remains bustling and vibrant, flanked with stunning buildings from a bygone era, newer restaurants and shops located in old Guild Halls. It is possible to take a carriage tour by horse from here or just sip a Belgian beer (there are lots to choose from!) at one of the cafés and watch the world go by!.The old Guild Hall buildings are now restaurants in the Bruges Market Place, shown in the picture at the top of the page.

The statues at the centre of the square are of Jan Breydel and Pieter de Coninck who were leading figures in the resistance against the French occupation of 1302. 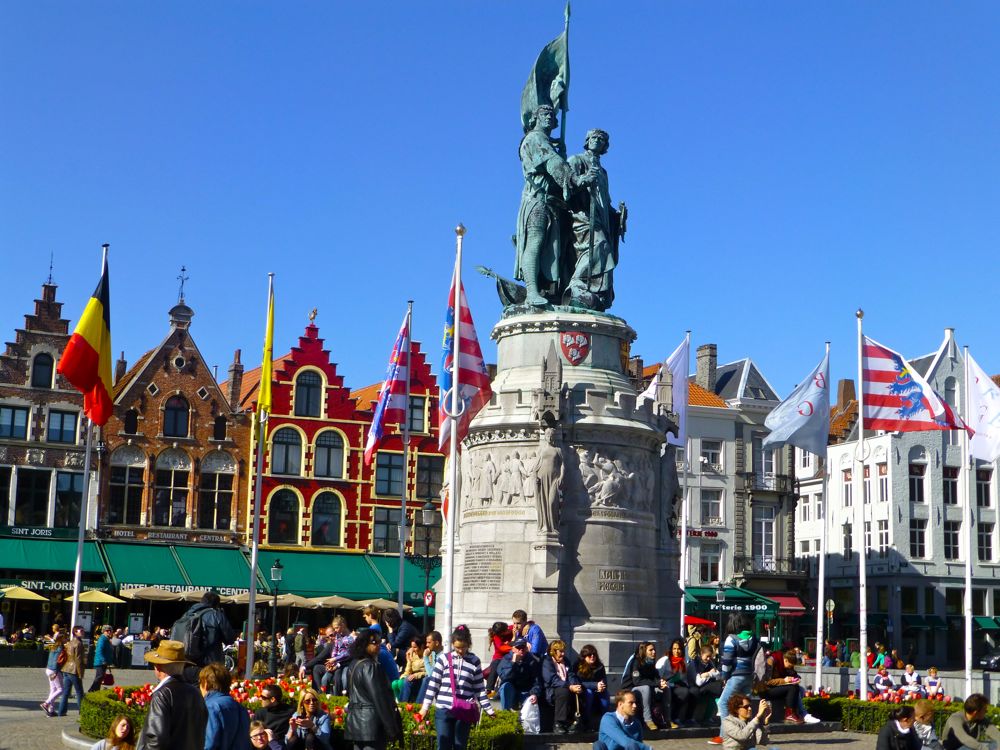 The Bottertoren Tower, Belfry of Bruges

The Belfry and cloth hall, on the north side the Provincial Court, is one of the city’s most impressive monuments, a beautiful neo-gothic structure. Its predecessor was in the Classical style, but an 1878 fire destroyed the building and the new structure was built in neo-gothic style to match the rest of the city. In the Middle Ages the Belfry and cloth hall was used for storing and displaying the much coveted Flemish cloth as well as other goods. The halls were used for exhibitions and trade fares. 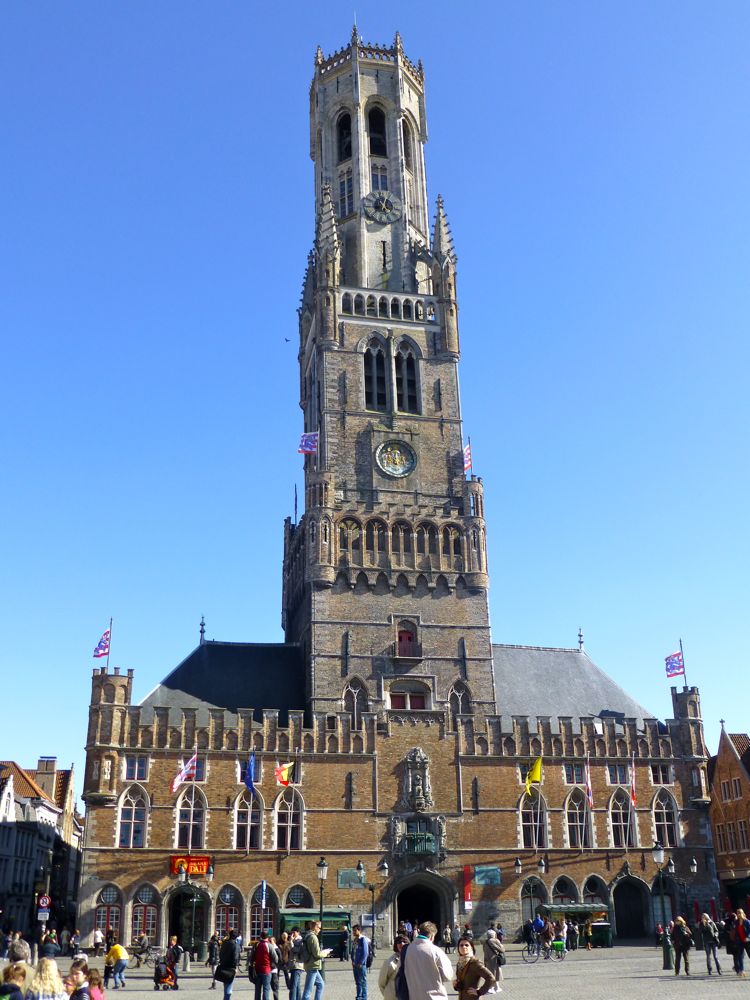 The 83m high belfry consists of 3 layers. The bottom brick 2 square sections date from the 13th century. The top octagonal lantern tower was built in Brabant limestone in 1482 – 1486. Belfries like this are typically found in Flanders, Northern France and Wallonia in Southern Belgium. By adding many of these belfries to their world heritage list in 1999 and 2005, UNESCO formerly recognized the significance they had played to the prosperity and autonomy of these late medieval cities.

The belfry from the inner courtyard 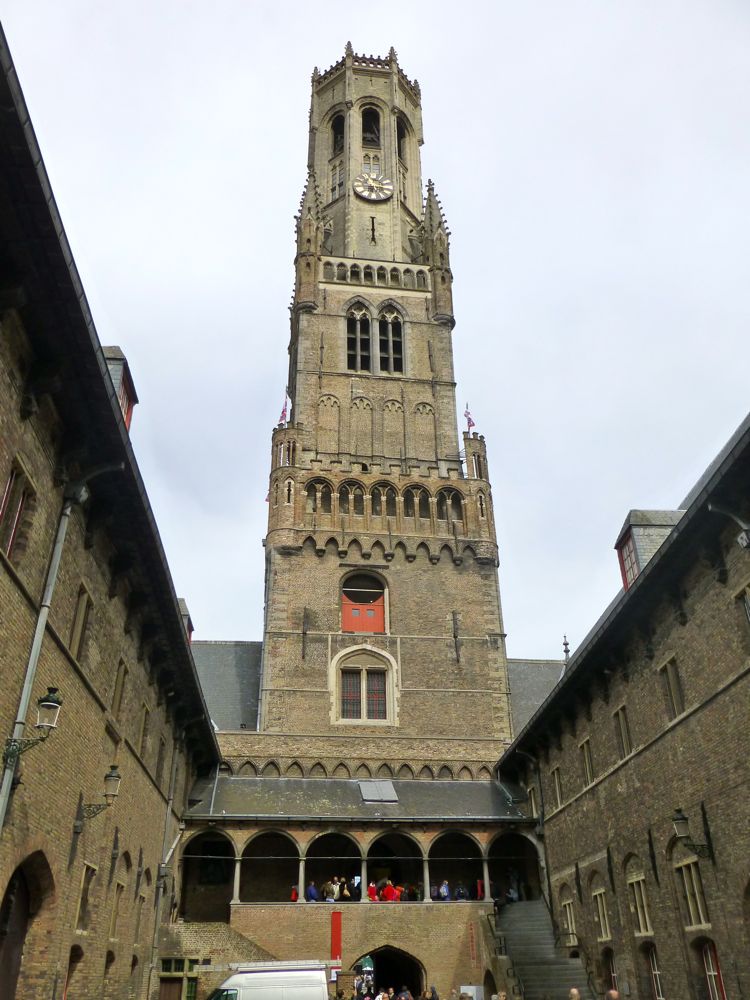 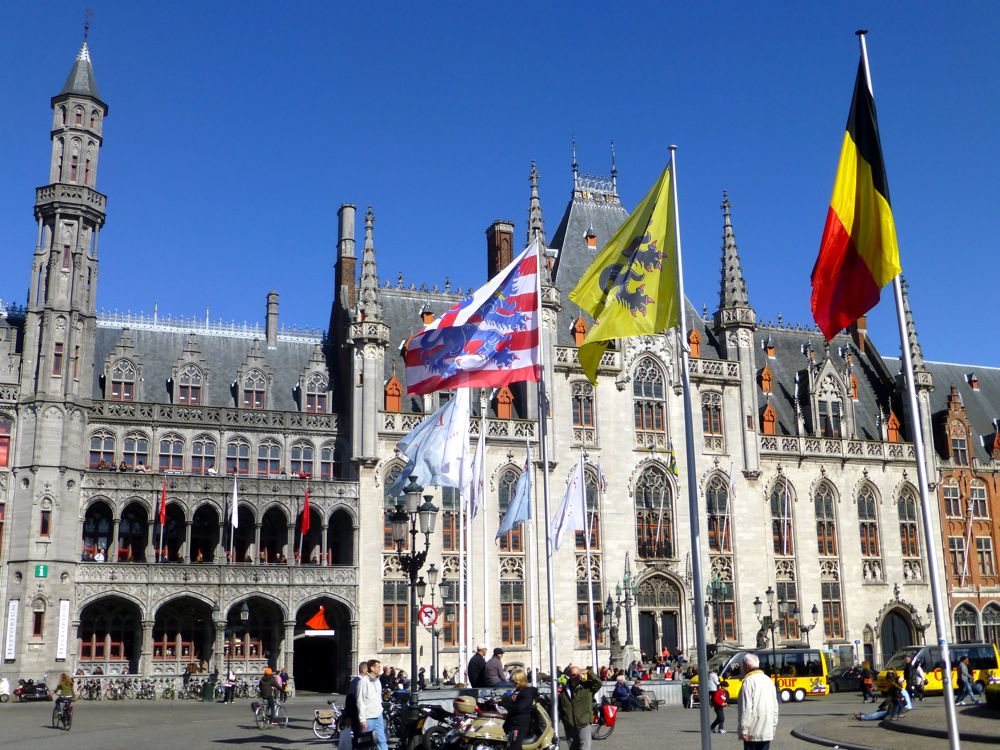 Strolling under the arch ways of Bruges 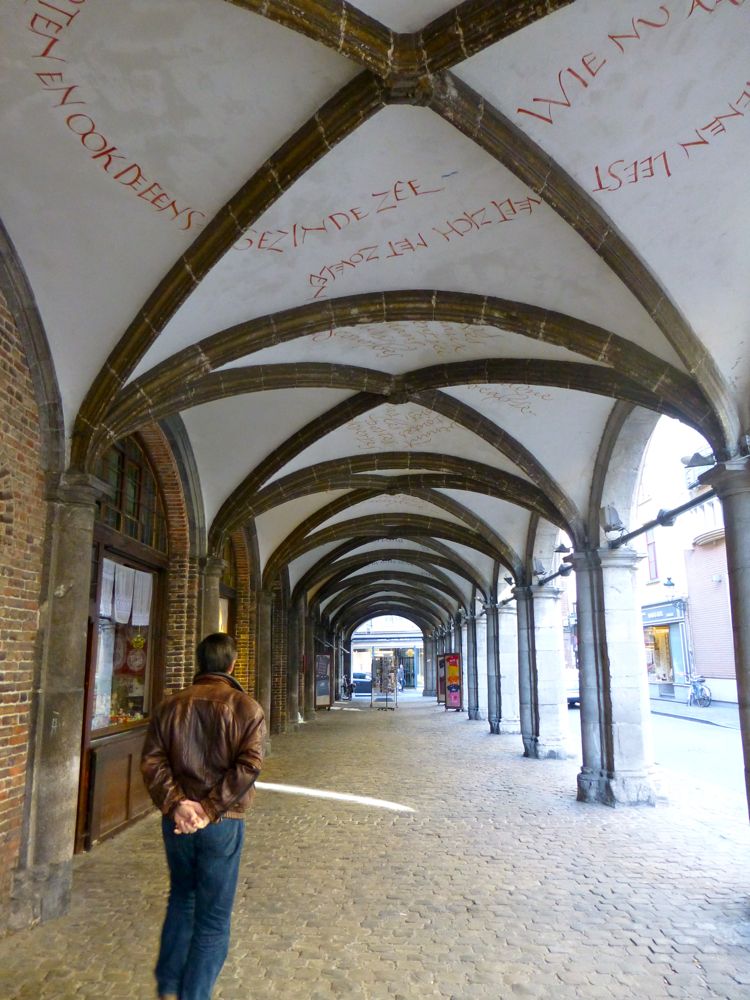 Sint-Salvator is the main church of the city in modern Bruge. Dating from the 10th century when it was the Parish church, it was not designated as a cathedral until the 19th century. 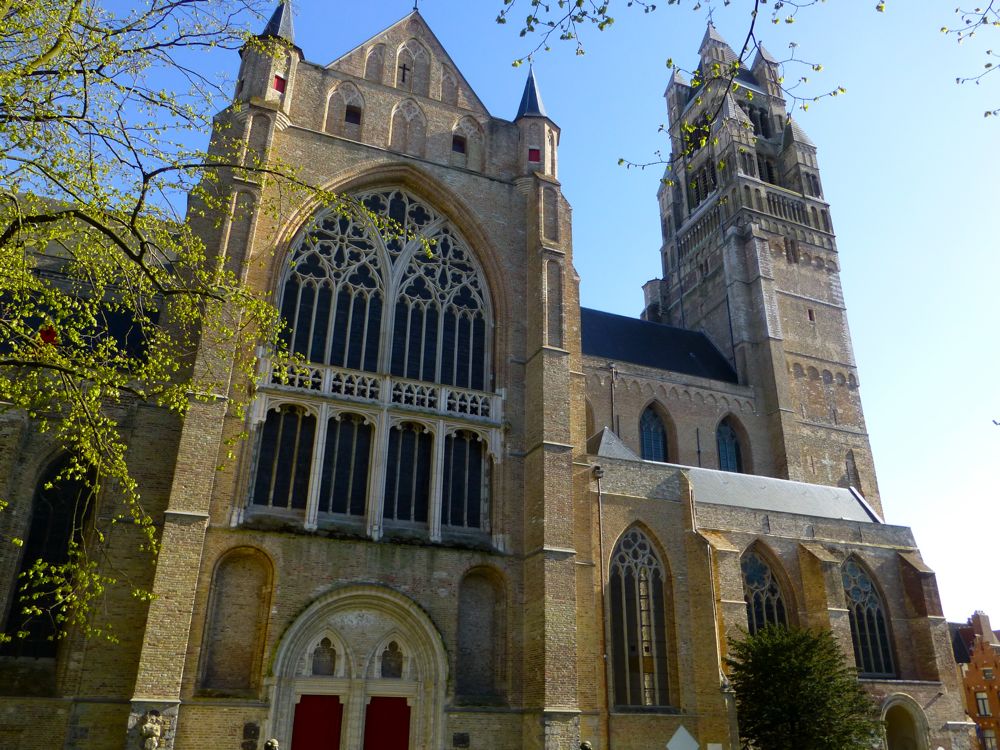 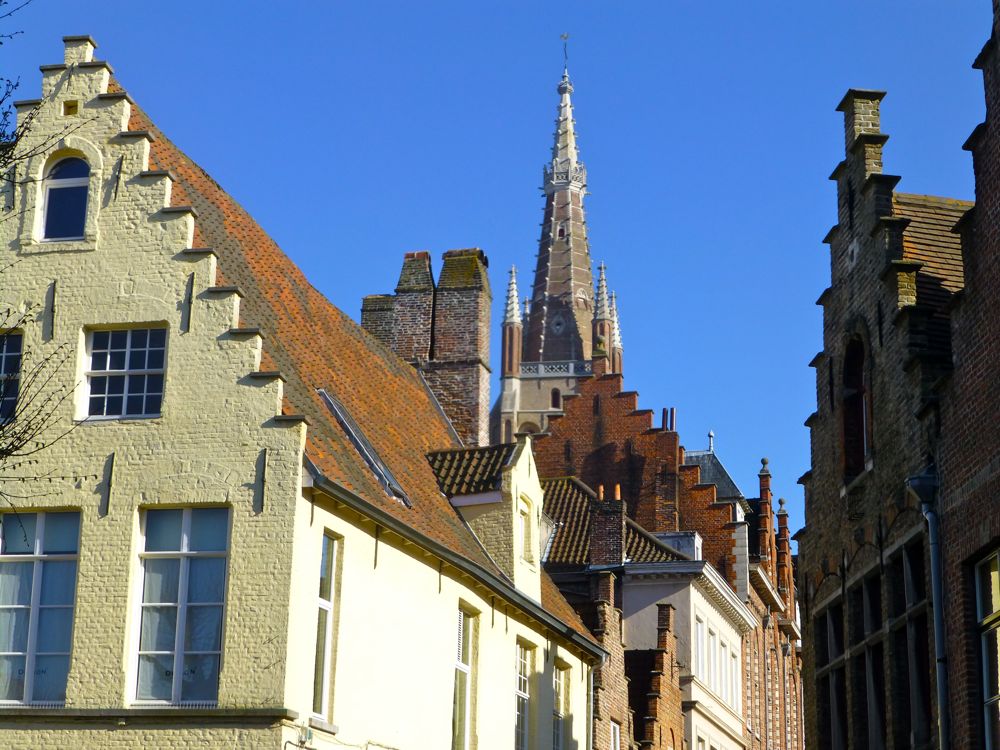 Bruges, just as beautiful at night 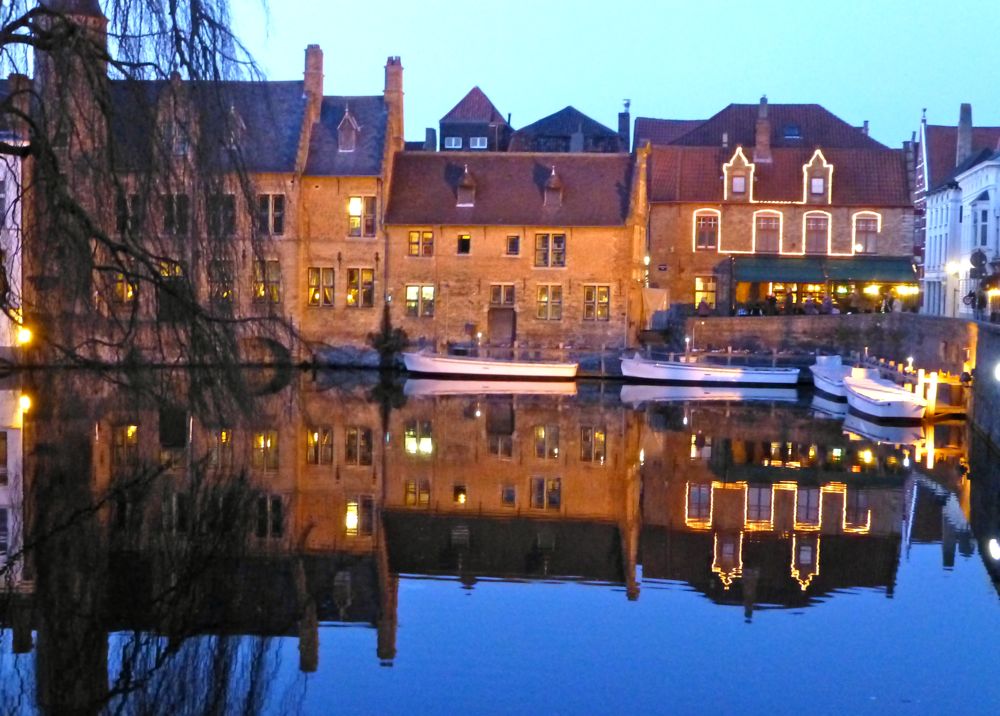 There is so much to see and explore in this captivating historical city, and I have yet to mention the famous Belgian chocolates or talk about its beer, lace and cheese…… next time!

Next post Chocolate, beer and lace from Bruges, Belgium 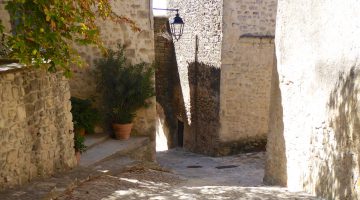