I have to admit I know virtually nothing about ice hockey. I grew up watching rugby, occasionally soccer, Wimbledon tennis and of course always Formula 1 racing!! I played field hockey in high school but no one played ice hockey neither was it televised in England. In all truthfulness it was generally regarded as one of the those American sports involving lots of muscle and big men chasing each other, all dressed up in their shoulder pads and other gear, just like that other version of ‘football’ which is played on this side of the pond!!! Ouchhhh some of you are probably squirming, I truthfully mean no offence, I just needed to be educated!! So who better to take this cynical Brit in hand than someone who knows a great deal about ice hockey, probably about ‘football’ too, as her husband played for his university. Whilst I was watching James Hunt and Niki Lauda put their lives in jeopardy on car race tracks across the globe, my dear friend Sarmi was transfixed by strong male forms; admiring the skill and tactics of her home team, the Toronto Maple Leafs, waving and swiping their ice hockey sticks, in what is generally regarded as the Canadian sport, ice hockey! When she kindly invited me to join her to watch these buffed and beefed up Canadians play the much revered, equally toned and fit, local San Jose Sharks I had few expectations, we were just two girlfriends out for a jaunt, wow, was I in for a surprise!!!
First of all this was the U.S. of A. where everything is done with pizazz and let’s just say a touch of Hollywood drama; for much to my amazement the local team appeared on the ice from the mouth of a shark!! 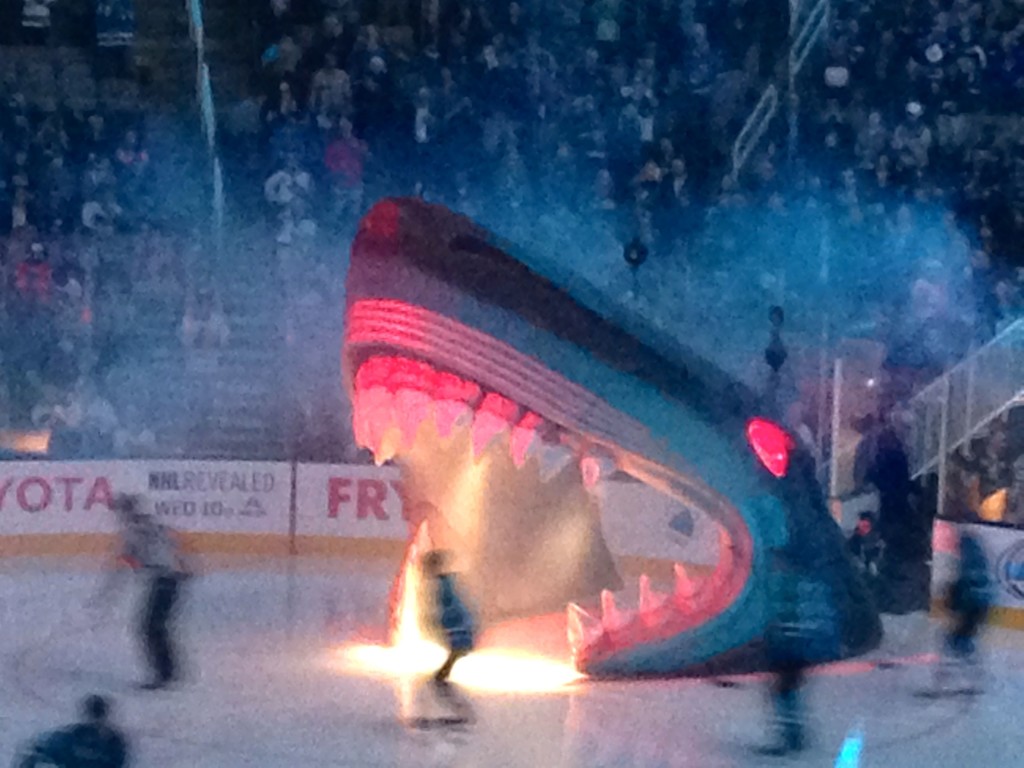 Next, before a puck was sliced, let alone sent reeling, respects were paid to each team’s homeland. 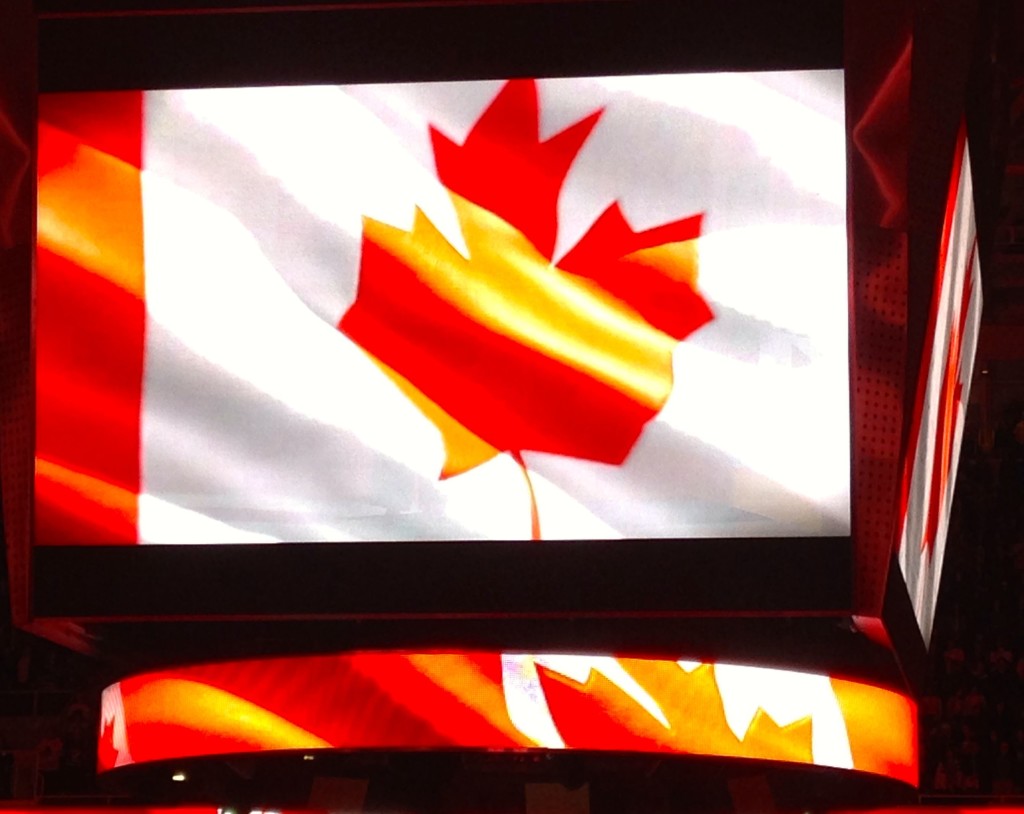 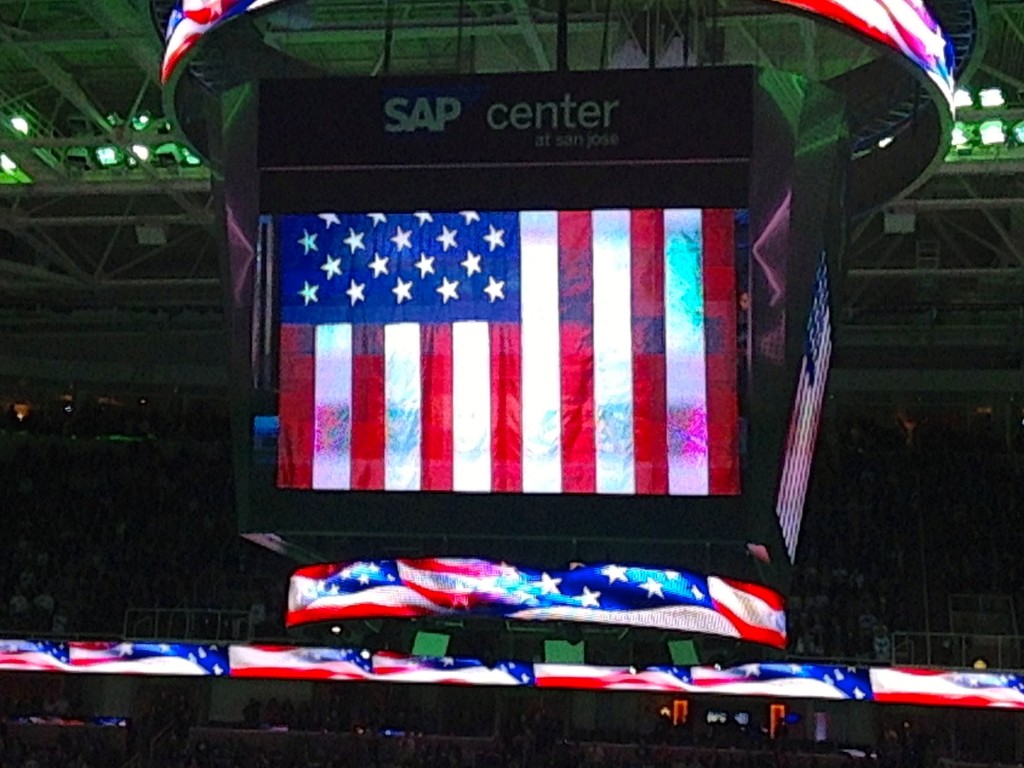 The players stood proud and respectful before the action began! 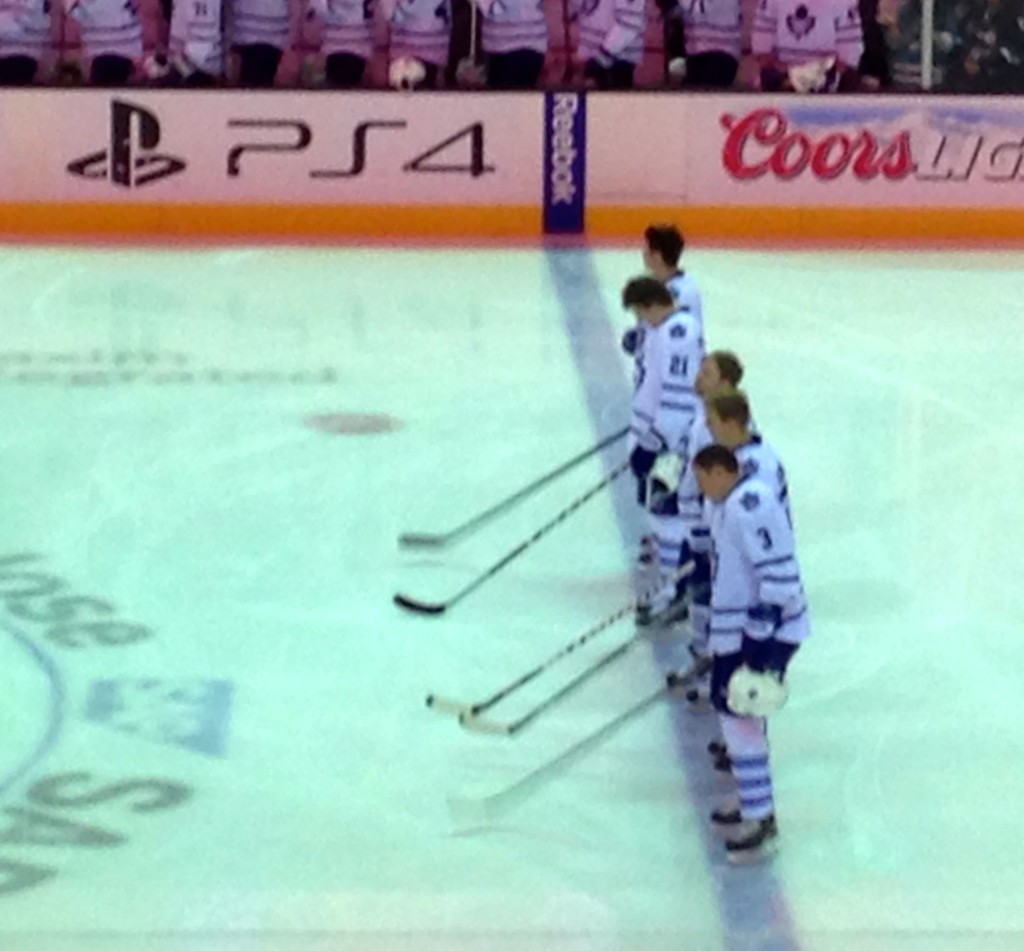 Once the cheering ended the music and commentary began and we were reminded whose ‘turf’ we were on! 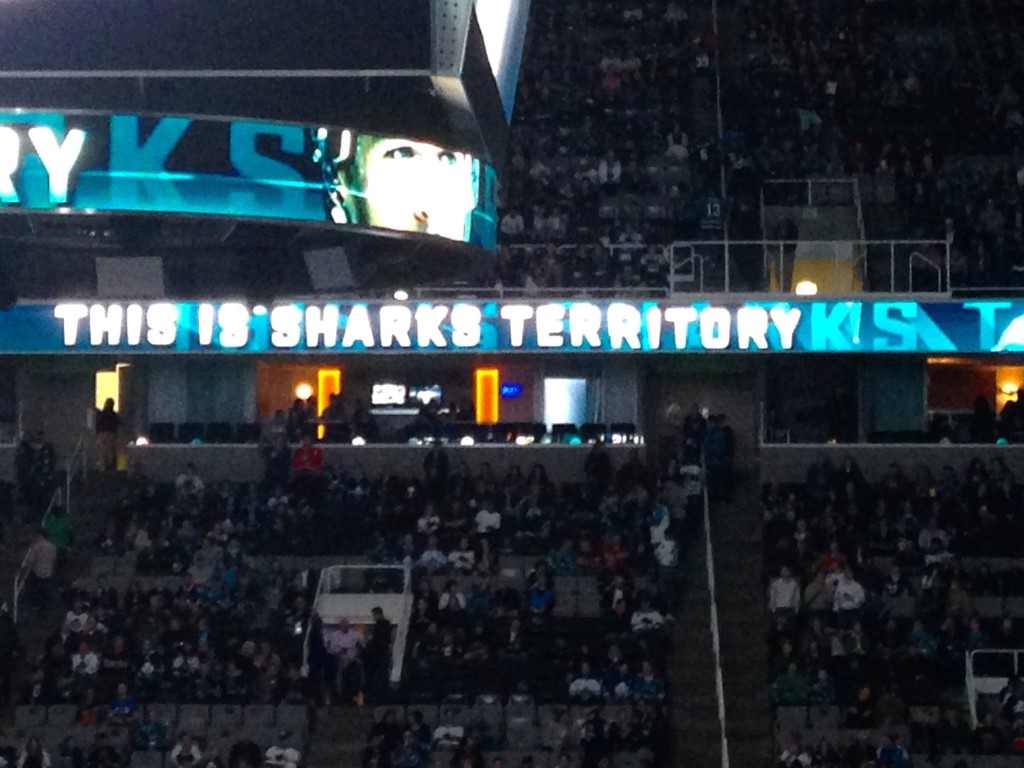 As the excited crowd roared and clapped each team tackled the other, chasing the tiny puck up and down the ice with great speed and agility. The puck was shot like an oversized bullet at impressive speeds which, I was informed, can sometimes reach over 100 mph! 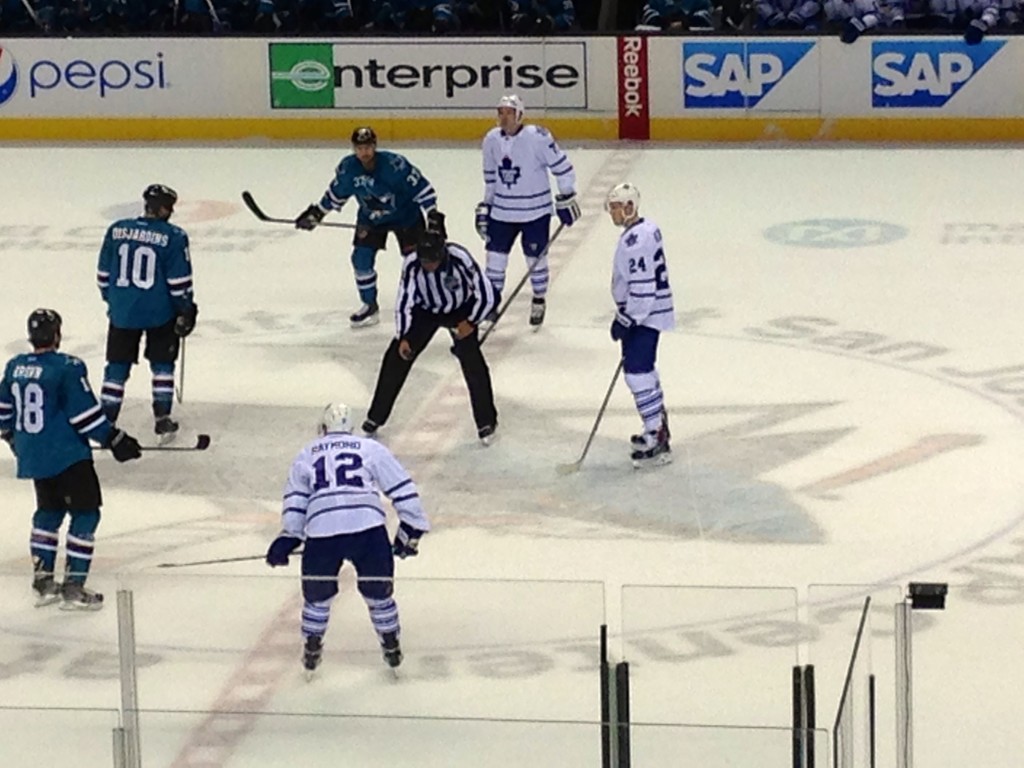 We were prompted when to participate, 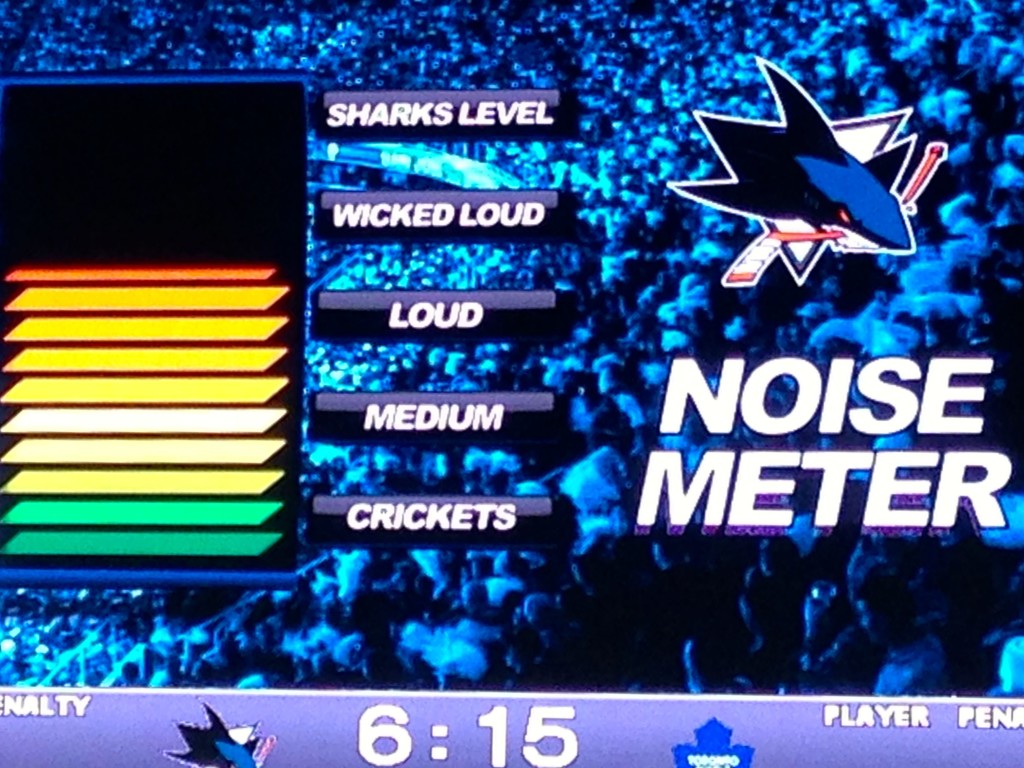 and just to what degree! 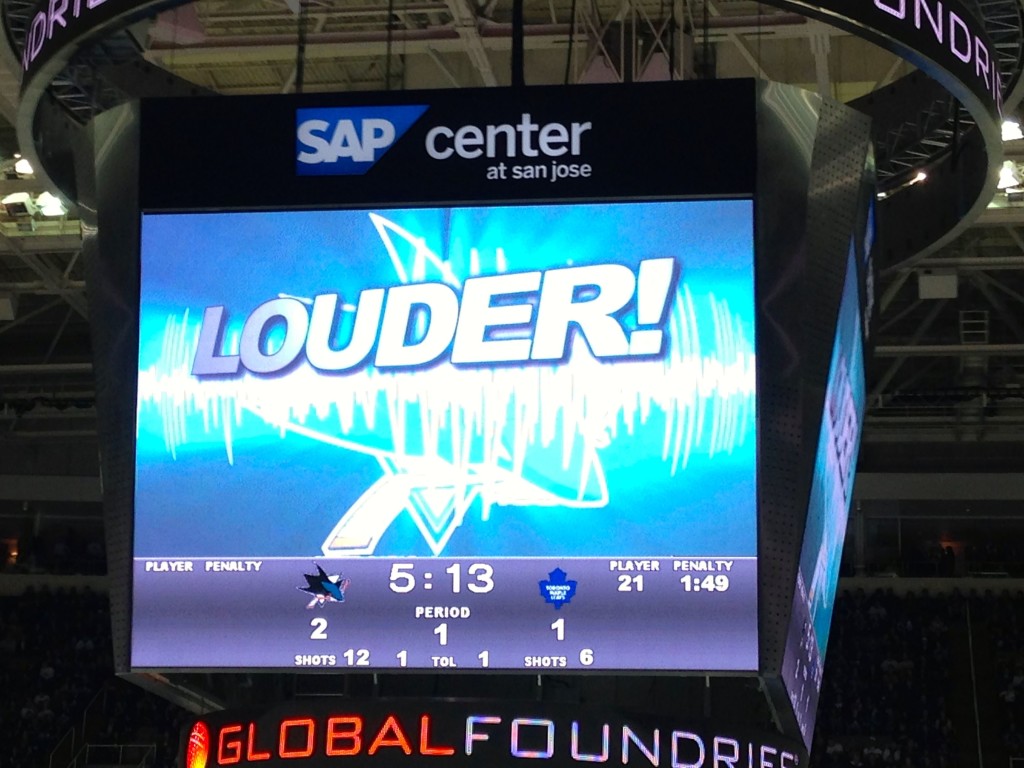 Maybe in Europe we don’t need such encouragement but it certainly added to the theatre!! Sticks clashed and the puck was sent spinning and skidding across the shimmering ice. 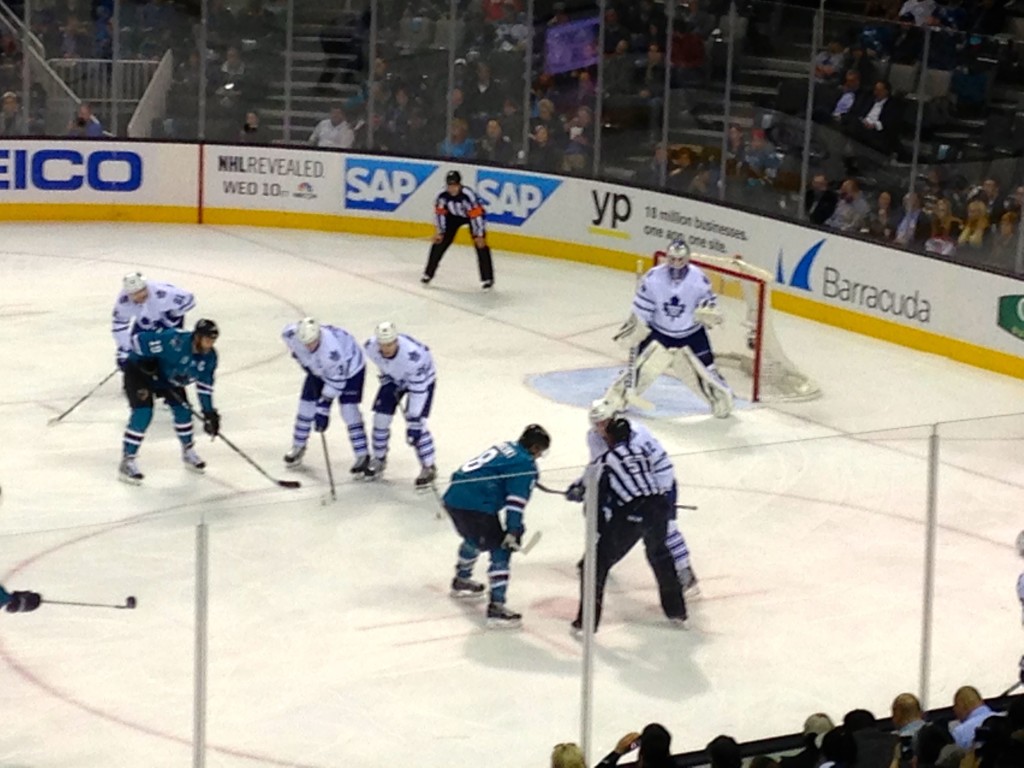 And when disputes could not be resolved the refs got onto the phone to those Canadian experts back in Toronto! 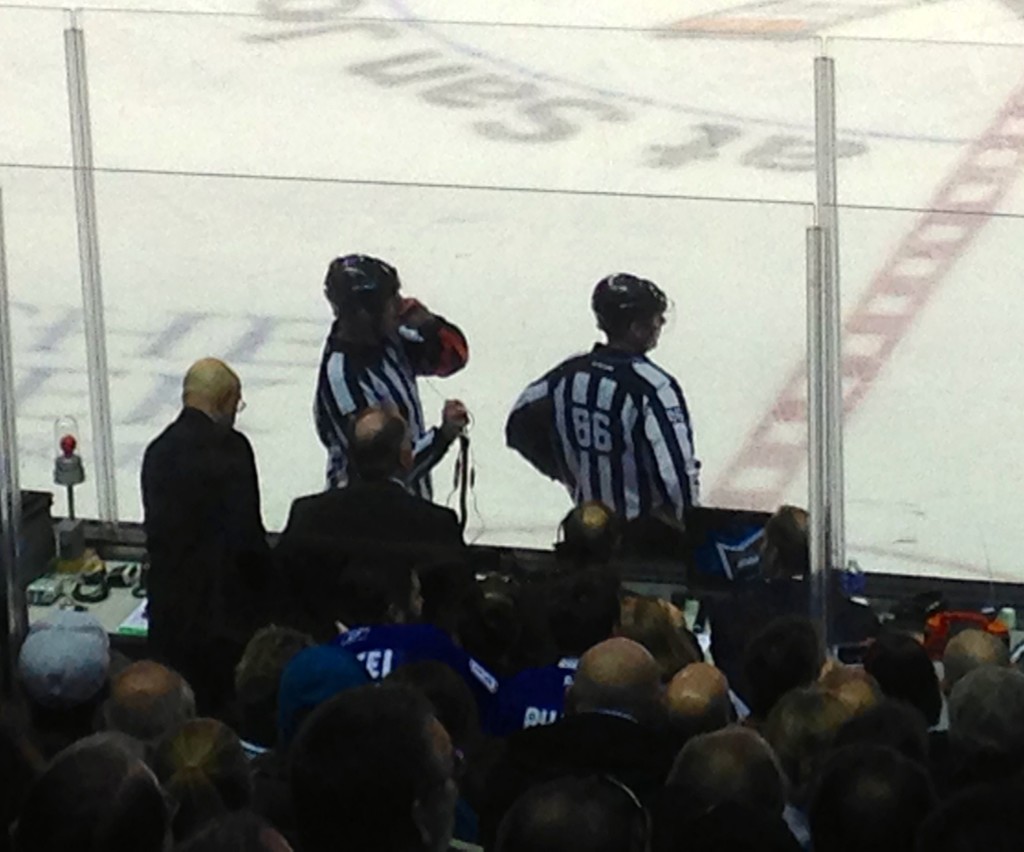 It was great fun! It was fast moving and exciting, it was theatre, some would argue that it was just that, a show! I really enjoyed it and am grateful to my Canadian cousin (after all she does share ‘my’ Queen!) for giving me such a treat, broadening my American repertoire just that bit more, who knows maybe I am England’s newest fan!!!!!

Previous Article To ski or not to ski, that is the question? 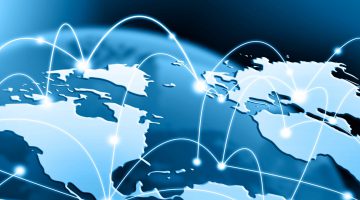